European airline shares were mixed on Tuesday (14-Sep-2010) in a day of choppy trading in wider markets. In key markets, UK’s FTSE was flat, while Germany’s DAX (+0.2%) and France’s CAC (+0.2%) advanced only marginally.

Aeroflot (+2.9%) made one of the day’s biggest gains after Aeroflot confirmed it has recovered USD52 million of funds embezzled from the carrier. The funds were transferred from Swiss bank accounts frozen at the request of Russian authorities in 1999.

Rosavia Airlines meanwhile filed a bankruptcy statement with the Moscow Court of Arbitration. The company is owned by Russian Technologies Corporation. It was formed by combining the assets of STC Russia, Kavminvodyavia, Orenburg Airlines, Vladivostokavia, Saratov Airlines and Sakhalin Airways. Aeroflot and Russian Technologies Corporation signed an agreement in Feb-2010 to transfer the assets of the carrier to Aeroflot.

Iberia traffic up on long-haul focus

The rise in traffic came as a result of the carrier’s policy to cut back on short to medium haul services and increase long haul routes. Long haul traffic rose 14.9% as a result, while domestic traffic was down 4.8% and medium haul down 4.1%.

Iberia stated unit revenue per available seat kilometre (ASK) continued to improve on the previous year, despite the average stage length rose by 10.1%. This improvement was due to the significant increase in the load factor and yields in long-haul flights. Business Plus passengers continued to improve, leading to a rise in yields.

Thomas Cook was flat, despite the European Commission approving the proposed acquisition of German tour operator Öger Tours by the group, under EU merger regulations. The Commission concluded that the proposed transaction will not significantly impede effective competition in the European Economic Area (EEA) or any substantial part of it. Thomas Cook plans to acquire the whole of Öger Tours except its wholly owned subsidiary, O&R Werbeagentur, and its minority share in Holiday Plan Turizm Isletmecilik ve Ticaret Anonim Sirketi, a Turkish company. The proposed transaction will result in horizontal and vertical overlaps, in the leisure travel sector, in particular in Germany. 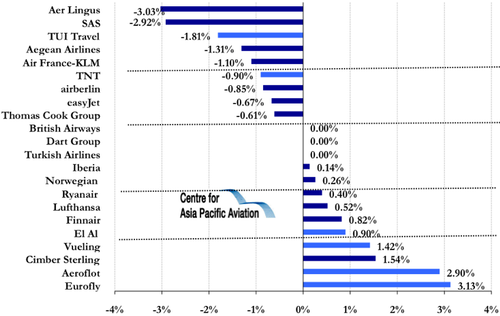