Aeroflot back in operating profit in 1H. Transaero acquisition to take its market share close to 50%

The Aeroflot Group turned around an operating loss in 1H2014 into a profit in 1H2015. The depreciation of the RUB served to boost both revenue and operating costs, with a net negative impact, but Aeroflot managed to grow its RASK more rapidly than its CASK.

The Ukraine crisis and tense international relations continue to weigh on demand for travel to/from Russia. But demand for domestic flights is growing strongly.

Moreover, Aeroflot is taking advantage of capacity reductions by cautious international rivals and struggling domestic competitors to increase its leading share of the Russian air transport market. The group's market share now looks set to jump to embrace almost a half of all passengers to/from/within Russia once it completes the acquisition of second ranked Transaero.

In 1H2015, the Aeroflot Group made a net loss of RUB3.451 billion (EUR54 million), which was 86% wider than its loss in the same period a year earlier. However, this year's result was adversely affected by an unrealised RUB8.848 billion (EUR137 million) loss on hedging derivatives.

Adjusting for non-recurring expenses (which include RUB1.639 billion for the early return of aircraft at Orenair and Rossiya Airlines and RUB567 million for a fixed asset write off at Vladavia), the operating result was RUB8.072 billion (EUR125 million) in 1H2015, compared with a small profit of RUB713 million (EUR48 million) a year earlier. 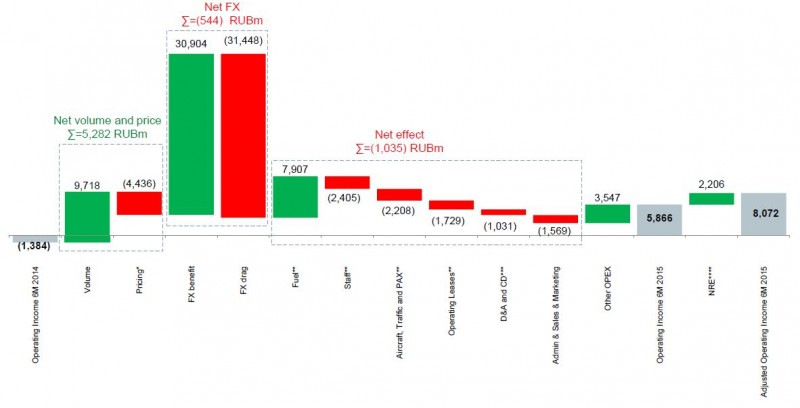 The Aeroflot Group increased its capacity in ASKs by 8.7% in 1H2015 and this was matched by growth in RPKs, so that load factor remained flat at 75.7%. Domestic ASKs grew by 32.2%, but the group's international ASKs were cut by 4.5% as demand continued to soften as a result of the geopolitical environment. 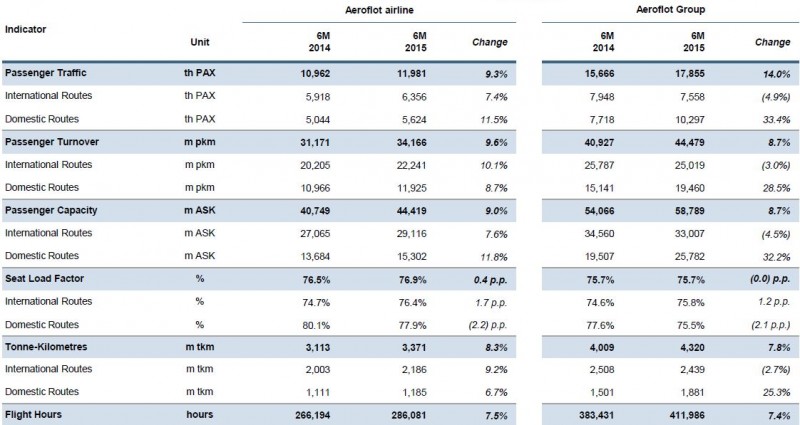 By region, the Aeroflot Group's strongest growth outside the domestic market was in Asia, with an ASK increase of 14.7%. In spite of this strong capacity growth, the group's load factor in Asia gained 4.1 ppts.

On European routes, ASKs were up by 3.4% and load factor was roughly flat (+0.1 ppts). There was also capacity growth in the Middle East (ASKs +8.6%), although here load factor dipped by 2.2 ppts as demand weakened on flights to Turkey.

Traffic growth to Asia and Europe was helped by higher capacity on some routes and by what Aeroflot called a "softening competitive landscape" as many foreign airlines cut capacity to/from Russia. Aeroflot's strategy of growing international transfer traffic through its hub at Moscow Sheremetyevo also stimulated growth on routes to Asia and Europe.

The group cut its ASKs to the Americas by 10.0%, reflecting its withdrawal from "commercially inefficient" routes to Toronto, Cancun and Punta Cana. The capacity cut helped to drive a 2.9 ppt load factor gain on flights to the region.

The group also cut ASKs on CIS routes, albeit at the lesser rate of 1.3%, but managed a 2.5 ppt gain in load factor in the region.

Aeroflot group revenue increased by 25.8% year on year, faster than the 8.7% increase in ASKs. The weakening of the RUB against USD and other international currencies boosted revenue by RUB30.904 billion (EUR479 million), accounting for 85% of the incremental revenue versus last year.

Scheduled passenger revenue was up 30%, while charter revenue plummeted by 71%. Cargo revenue grew by 16.3% and other revenue increased by 39.9%. 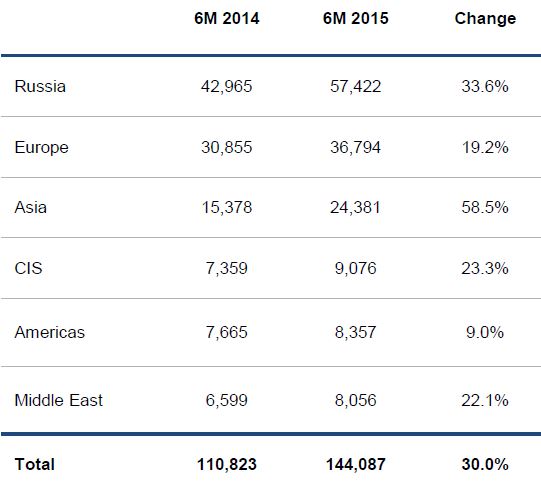 On international markets, yield was up 18.7% and passenger RASK was up 21.6%. Currency movements had a significant positive impact on international yields.

Aeroflot attributed its yield improvement to "active revenue management", in addition to the positive impact of RUB devaluation on yield on inbound and transit routes. Moreover, the negative impact of reductions in EUR denominated outbound fares is being reduced. The group said that the "aggressive pricing" of domestic competitors was affecting yields within Russia.

Operating costs were up by 20.4%, faster than the growth in ASKs, but slower than the increase in revenue. Fuel costs grew by 11.1%, faster than capacity growth in spite of lower market prices for jet fuel, due to the weaker RUB versus USD.

Ex fuel costs increased by 24.1%, also inflated by RUB depreciation. In addition to the impact on fuel costs as reported in RUB, currency movements also had a significant impact on other USD-denominated costs such as operating leases, maintenance and aircraft, traffic and passenger servicing.

The Aeroflot group's cost per ASK (CASK) increased by 10.8%, but the company says that without the impact of foreign exchange and non-recurring expenses, it was down by 11.1%. Currency movements increased costs by RUB31.448 billion (EUR488 million), so that the net impact on operating profit was negative by RUB544 million (EUR8 million). 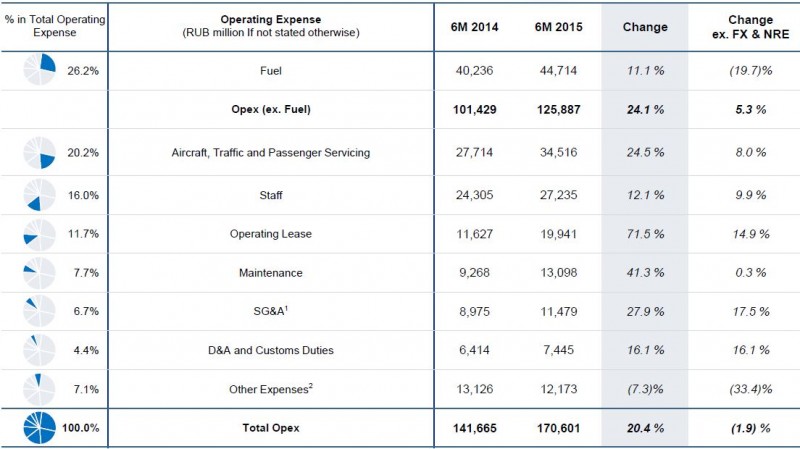 1 Includes sales and marketing expenses and administration and general expenses.
2 Other expenses include VAT under code-sharing agreement with Rossiya Airlines and fuel excise reimbursement during 6M 2015
Source: Aeroflot

Aeroflot's low cost airline, Pobeda, commenced operations just before 1H2015 (in Dec-2014) with a service to Volgograd. Launched as a replacement for its predecessor Dobrolet (forced to close as a result of European Union sanctions), it is the only Russian LCC and deploys a fleet of 12 Boeing 737-800 aircraft.

Pobeda carried 1.1 million passengers, at a load factor of 81.0%, in the half year, when it accounted for 6.2% of the group's total. With its principal hub at Moscow Vnukovo, it has 15 regular destinations and operated 37 routes in the 2015 summer schedule (including seasonal routes).

Pobeda aims to have 40 aircraft on 47 routes (including international destinations), carrying ten million passengers in 2018. 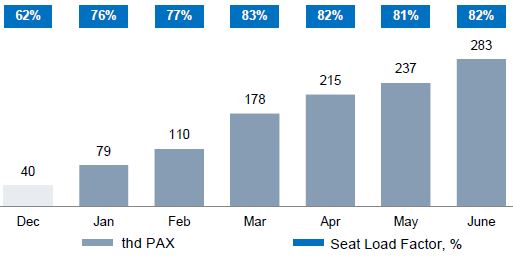 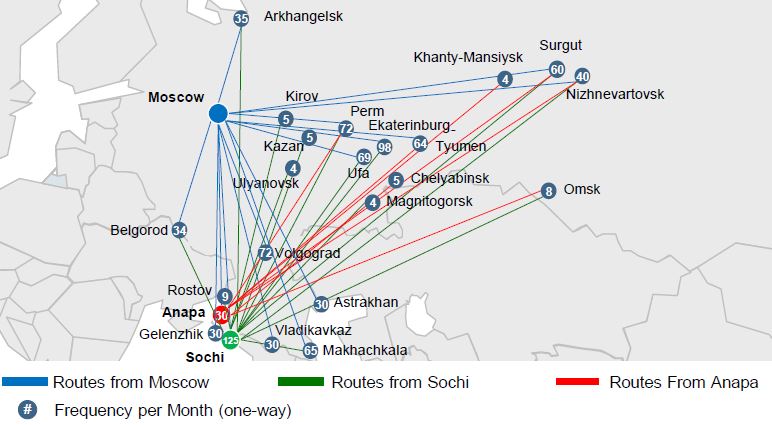 The Aeroflot Group, still majority owned by the Russian government, has benefited in market share terms in the past from being the state's designated leader of the consolidation of the airline market in Russia. The group now has more than three times the passenger numbers of its nearest competitor in the Russian market and more than the combined numbers of its nearest four competitors.

As others cut capacity (in particular UTair and foreign airlines), the Aeroflot Group's market share among all airlines operating in Russia has grown from 31% of passengers in 1H2014 to 37% in 1H2015.

It now looks set to increase this share further through the acquisition of a 75% stake Russia's number two ranked airline Transaero, whose passenger share was 12% in 1H2015. Aeroflot has been prompted into this course of action by the Russian government, essentially in order to save the heavily indebted Transaero from bankruptcy. 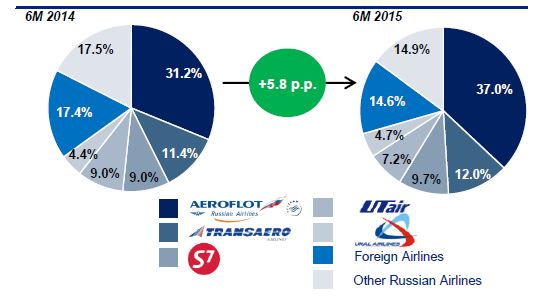 The near 50% combined market share of the two groups has attracted the attention of Russia's Federal Antimonopoly Service (FAS), but it seems likely to be approved. In a statement on 2-Sep-2015, FAS Head Igor Artemyev stated: "I have said that I prefer the alternative of bankruptcy ... we will ask Aeroflot to sell a part of their routes, where it gains a monopoly as a result with a consolidation with Transaero Airlines."

Although this transaction will present significant operational challenges as it executes the acquisition, Aeroflot has significant experience of integrating subsidiary airlines into the group. Moreover, the deal will further accelerate the consolidation of the Russian airline industry, cementing Aeroflot's undisputed market leadership.

The group's 1H2015 results show a welcome return to operating profit growth, after a 43% reduction in FY2014, in spite of the difficult geopolitical backdrop affecting demand for international traffic to/from Russia. Its business appears to be robust despite the challenges that it faces.