Aer Lingus' share price soared 14.9% on Friday as the prospects of a Ryanair takeover improved. The Irish government, which has a 25% holding in the flag carrier, has reportedly shifted away from its previously staunch opposition to a Ryanair bid, towards a likely agreement.

Ryanair already holds 30%, so a government sale would give it a majority. But it wants more than that and will have to deal with a potentially hostile employee group which between it owns 14% of the stock.

SAS meanwhile reported still more ugly traffic results for November, despite improved yields on the mainline carrier, pointing to further declines in its profitability. Its share price fell 8.0%, suggesting that there are still investors who are surprised at the carrier's continuing weak performance.

The dark tone of European trading on Friday - with markets steeply down following the release of worse than expected US unemployment figures - otherwise dealt fairly benignly with airline stocks. London's FTSE fell 2.7%, Germany DAX lost 4.0% and France's CAC was down 5.5%. 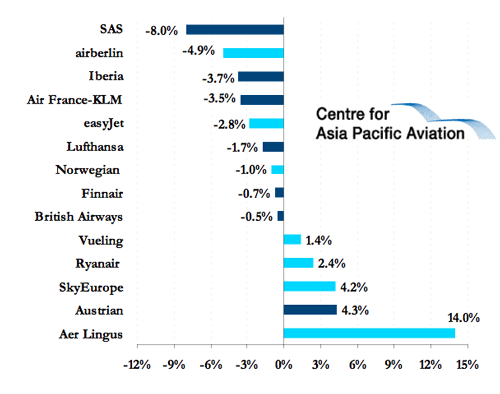