Aer Lingus saw its losses increase slightly in 1Q2014. This had been anticipated by the company, which attributed it to the timing of Easter and the threat of industrial action. Although pursuing strong growth on the Atlantic and still seeing growth in traffic operated by Stobart Air under the Aer Lingus Regional brand, its short haul main-line business continues to operate in a very price competitive environment.

Aer Lingus' use of contract flying, from both sides, looks sensible. It is hiring capacity from ASL Aviation to help it with its transatlantic expansion, but without loading up on fixed costs. In addition, its provision of short haul capacity to Virgin Atlantic and long haul capacity to Novair makes use of what is a relatively efficient cost base (compared with most legacy carriers) and helps to maintain its fleet utilisation.

However, it does not replace the need for it to ensure it has the right capacity and cost base in its own core markets. Its "CORE" programme, announced in Feb-2014 and still going through more detailed development, will be critical.

In 1Q2014, Aer Lingus saw its operating loss widen a little, almost 7%, to EUR49 million. Revenues were just below flat, down -0.1%, at EUR259 million. The shift in the Easter weekend from 1Q in 2013 to 2Q in 2014 had a negative impact on both revenue and profits. In addition, Aer Lingus said that the threat of industrial action also negatively affected bookings in Mar-2014.

Aer Lingus' balance sheet remains robust, with a gross cash balance of more than EUR1 billion at 31-Mar-2014, equivalent to well over eight months of revenues. This was broadly stable from a year earlier, but its gross debt fell so that net cash was up EUR69 million year on year to EUR554 million at the end of Mar-2014. 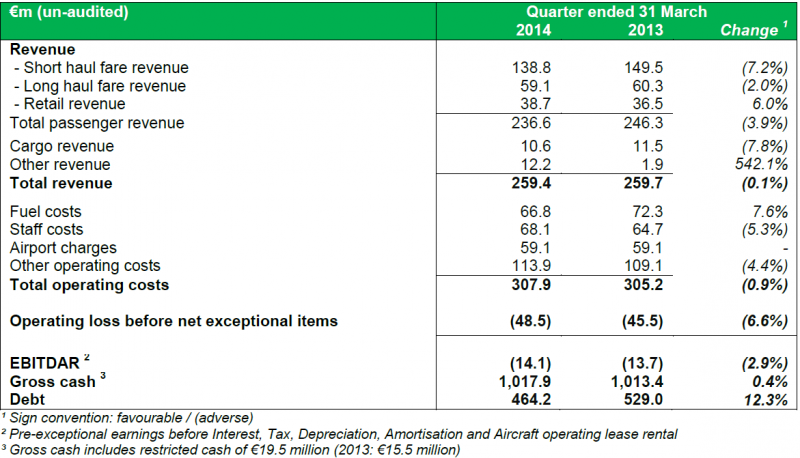 Capacity, measured in available seat kilometres, was down 0.8% year on year, although long haul capacity grew by 2.4%. This long haul capacity growth was a temporary diminution in the rate of expansion, which was almost 12% in 2013 and will again be double digit in 2014.

In spite of the lower capacity, load factor dipped by 1.6 ppts in 1Q2-14, with both short haul and long haul seeing a decline. The timing of Easter probably accounts for much of this, as Aer Lingus load factors have generally been on an upward trend in recent years. Certainly, it will not want to see further declines in the remaining quarters of 2014. 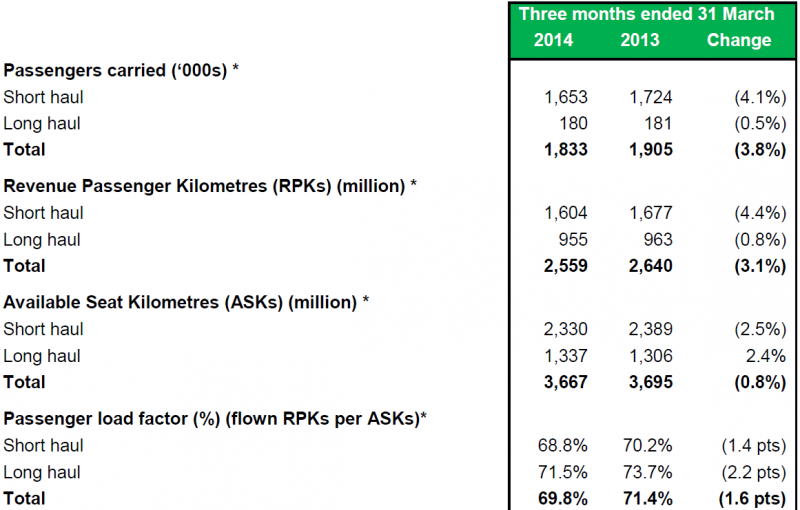 Total revenues were almost flat year on year, but this performance was helped by growth of 6% in retail revenues and a six fold increase in Other revenues, which relates to Aer Lingus' contract flying for Virgin Atlantic and Novair. The company said that both of these wet leases contributed positively to the Group's operating result in 1Q2014. CEO Christoph Mueller told analysts on a conference call that Aer Lingus was seeking additional opportunities in contract flying, both on short haul and long haul.

Both short haul fare revenues (-7%) and long haul fare revenues (-2%) were down year on year, while cargo revenues fell 8%. Aer Lingus estimates that the change in the timing of Easter had a negative revenue impact of EUR8 million to EUR10 million and that the threat of strike action had a EUR3 million impact.

In spite of the weak revenue performance on short haul in 1Q2014, Aer Lingus says that current forward bookings suggest that revenues for most of the short haul network should be "broadly in line with, or marginally ahead of, 2013 levels". In addition, it says that "forward volume and yield trends for the remainder of Aer Lingus' long haul network are satisfactory and are ahead of last year in overall network terms".

Retail revenue per passenger grew by 10% to more than EUR21. This benefited from higher online booking fees and commission-based revenues, in addition to a 1.3% increase in onboard spend per passenger. Aer Lingus attributed this latter performance to its "refreshed inflight food offering", launched late in 2013.

Costs were up 0.9%, faster than revenue growth

Operating costs grew by 0.9%, ahead of revenue growth, in spite of a 7.6% fall in the fuel bill. Labour costs grew by 5.3% as headcount increased due to the expansion of the transatlantic flying programme and a staff salary increase implemented in Sep-2013.

Airport charges were flat and other costs increased by 4.4%, due to increased overheads, foreign exchange losses and increased aircraft hire charges. The latter were the result of aircraft hired to protect Aer Lingus' schedule from threatened strike action, the new 757 contract and a full quarter of the Virgin contract (which commenced at the end of 1Q2013).

Although long haul seat growth in 1Q2014 was modest, Aer Lingus plans growth of 19% on its transatlantic network for 2014 as a whole. This follows double digit growth in 2013 on the Atlantic. It is wet leasing Boeing 757 aircraft from ASL Aviation, with significant expansion kicking in from the start of the summer season in 2Q.

A new route from Dublin to Toronto, launched on 14-Apr-2014, and extra frequencies from Shannon to Boston and New York, are part of this wet lease contract. In addition, using its own A330 aircraft, Aer Lingus returned to the Dublin-San Francisco route in Apr-2014, after a five year gap. CCO Stepehen Kavanagh told analysts on a conference call to discuss the 1Q results that the new capacity was being "well absorbed" in the market.

Aer Lingus' transatlantic strategy plans to three key strengths. One is the geographical positioning of its Dublin hub in Europe's western extremity; the second is the size of the Irish and Irish-descended community in North America; and the third is US Customs pre-clearance at both Dublin and Shannon for US-bound passengers, which saves a significant amount of time on arrival. 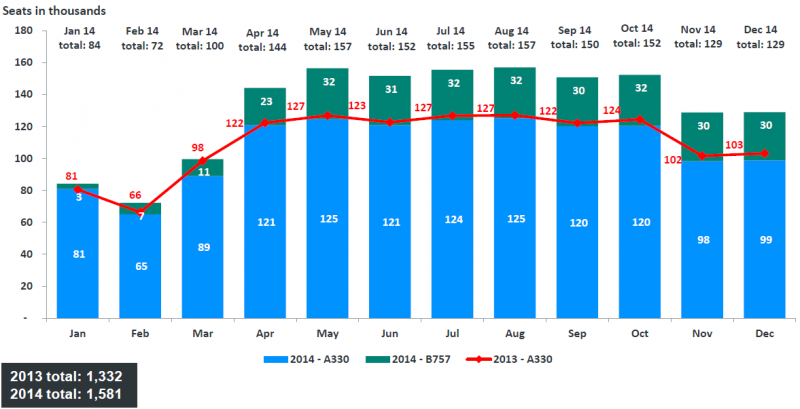 Note: 2013 seat capacity was all flown on A330 aircraft, as shown by the red line
Source: Aer Lingus

In order to feed this expansion, Aer Lingus positions itself and its Dublin hub to passengers in the UK regions as a more convenient alternative to London Heathrow. Its partnership with Stobart Air, formerly Aer Arann, allows it to serve the UK regions under wet lease arrangements with the latter under the brand Aer Lingus Regional.

As in FY2013, operating cost growth exceeded revenue growth in 1Q2014 and Aer Lingus has increased its focus on reversing this balance through the launch in Feb-2014 of its two year Cost Optimisation and Revenue Excellence (CORE) programme. This includes a cost reduction target of EUR30 million. The company says that the programme is on plan, that work streams have been identified, business cases commissioned and a programme office established.

More specific details of CORE will be communicated to employees and unions in May-2014. This will be a crucial stage in the programme, since labour is key to the achievement of such initiatives. Labour relations have been strained by a dispute over pensions. An Expert Panel was formed in Mar-2014 to carry out a review as to how a final resolution can be reached, intending to report in May-2014. Its work could be very important in establishing the industrial relations backdrop for the implementation of CORE.

Aer Lingus is maintaining its 2014 guidance

Aer Lingus continues to expect an operating profit for 2014 that is broadly in line with 2013's figure (EUR61 million before exceptional items). It had previously said that 1Q would be weaker than last year due to the timing of Easter and this has now turned out to be the case.

At this point in the year, there is no reason why it cannot achieve its FY2014 guidance. However, this would represent an operating margin of somewhere around 4%, a level it should aim to exceed in the long run.

The unit revenue growth that Aer Lingus enjoyed from 2009 slowed in 2013 and started to reverse in 1Q2014. CORE will be core to longer term sustainable profitability.