The majority of European carriers’ shares were up on Friday (18-Jun-2010), as wider markets edged slightly higher, marking an eighth consecutive session of gains. The banking sector pushed shares higher, offsetting losses in the pharmaceuticals sector.

Aer Lingus (+3.4%) gained after Chairman, Colm Barrington, stated 1Q2010 represented a "positive start to the year" for the carrier. Trading during Apr-2010 and May-2010 was ahead of the same period in 2009, despite the impact of the Icelandic volcanic eruption. Ash-related disruptions are expected to reduce earnings by approximately EUR20 million. Aer Lingus reported the following highlights for 1Q2010:

Russian Finance Ministry confirmed during trading that Russian Technologies would take a small stake in Aeroflot, as part of a deal to transfer the assets of six regional carriers to Aeroflot. The Russian Government holds a 51% stake in Aeroflot.

Aegean up, easyJet down 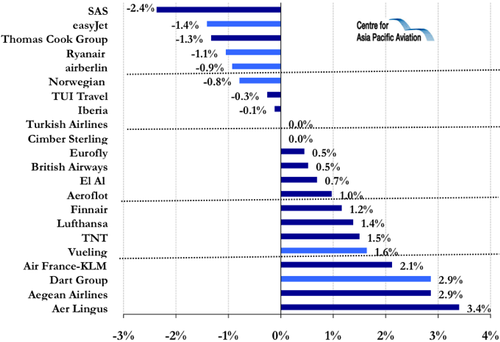