Aegean Airlines’ annus mirabilis, but can it maintain the momentum in 2014?

Aegean Airlines had a good 2013. Not only did it return to profit for the first time since 2009, but it recorded its best result since its 2007 listing on the Athens Stock Exchange. All the key indicators improved: double digit passenger growth, load factor gains, a sharp increase in revenue per ASK and a fall in costs per ASK. Moreover, on the strategic front, it finally completed the acquisition of Greek rival Olympic Air after first attempting this in 2011.

The challenge for Aegean will be to maintain the momentum in 2014.

The integration of the loss-making Olympic, while giving the potential for synergies, will inevitably absorb significant management attention. Meanwhile, keeping hold of RASK gains in the face of growing competition from LCC competitors (Ryanair will open bases in Athens and Thessaloniki in Apr-2014) and continuing to reduce CASK will also be crucial to showing that the 2013 result was not just a flash in the pan.

The operating margin of 12.1% was 13.7ppts better than the previous year and Aegean’s best margin for at least a decade.

Aegean acquired loss-making Olympic Air at the end of Oct-2013 and consolidated its results into the group’s accounts for the final two months of the year. On a stand-alone basis, Olympic lost EUR14 million in 2013. The integration of Olympic will be an important task for 2014. Compared with Aegean, Olympic is smaller, has shorter average sector lengths, lower load factors, a greater domestic focus and lower profitability.

At the group level, Aegean’s 2013 accounts recorded revenues of EUR699 million and a net profit of EUR58 million. If Olympic had been consolidated for the full year, combined revenues would have been EUR848 million and the net profit EUR53 million.

Most of the rest of this analysis will focus on the performance of Aegean Airlines, the parent company of the group and the larger of the two operating airlines.

The 2013 results of Aegean represented a very strong turnaround after three years of losses at both the operating and the net level to record its highest profits for at least 10 years. This appears to have been driven by strong revenue growth, up 21% in 2013 after increasing by only 7% over the previous four years (2008 to 2012). Note that Aegean changed the way it accounts for passenger airport charges in 2013, removing these charges from both revenues and costs (with no impact on profits).

The higher profitability of Aegean in 2013, together with low levels of capital expenditure, helped to drive improvements in the company’s balance sheet.

Net cash (the surplus of cash over debt) increased from EUR67 million to EUR162 million and adjusted net debt (adding operating leases capitalised at eight times annual rental payments to debt) fell from EUR497 million to EUR399 million, while book equity grew by 45% to EUR221 million. Aegean’s end 2013 cash balance of EUR222 million (up 48%) is equivalent to 118 days of revenues.

Growth was heavily weighted towards 2H2013, with an increase in total passenger numbers of 19% (versus 3% in 1H2013). International passenger growth accelerated from 11% in 1H to 17% in 2H, but the greater change across the year was in the domestic market, which saw Aegean’s passenger numbers fall by 5% in 1H and then grow by 22% in 2H.

Aegean’s growth in the domestic market contrasts with an overall market decline in passenger numbers of 3% in 2013 (source: Aegean Airlines Annual Report 2013). 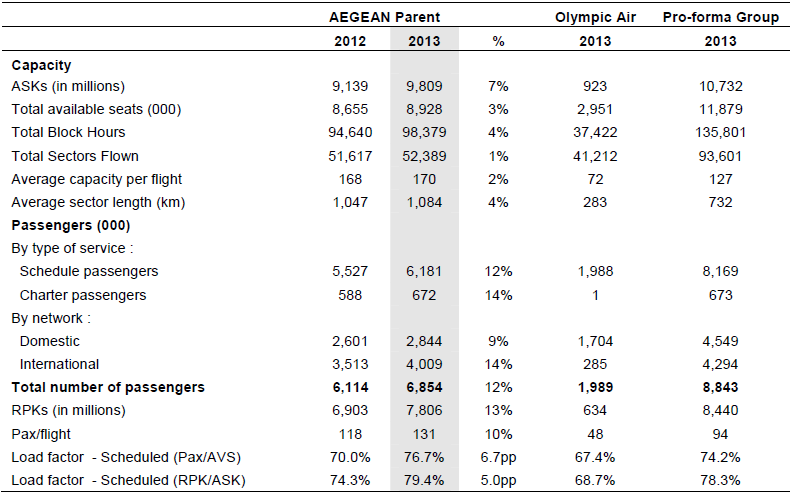 Revenues were up a healthy 21%

Aegean’s revenue growth of 21% outpaced growth in ASKs and passenger numbers. Total revenue per ASK (RASK) increased by 13%, reflecting improvements in both yield per RPK (up 7%) and load factor.

RASK growth slowed from 23% in 1H2013 to 6% in 2H2013 as capacity growth accelerated. The growth in revenues was fairly uniform in both halves of the year, although the main driver of this growth shifted from unit revenues in 1H to capacity in 2H.

Aegean successfully controlled growth in costs to a rate of 4%, well below growth in revenues and capacity. Fuel costs, which made up more than half of the total (52%) grew by 5% and ex fuel costs increased by just over 2%. Labour costs, the second biggest category, fell by 1% in spite of an 8% increase in headcount.

The only significant cost item to outpace growth in revenues (and ASKs and passenger numbers) was airport charges, which were up by 23%. Distribution and marketing costs also grew faster than capacity, rising by 12%.

RASK growth was the key to profit recovery in 2013

However, it was also crucial that Aegean maintained the downward path of CASK (-2% in 2013). Ex fuel CASK (-2% in 2013) has fallen every year since at least 2006, although this largely reflects increases in average sector length over the period.

Typically, both CASK and RASK tend to fall as average sector length increases and Aegean’s CASK has broadly reflected this in recent years. However, whereas its RASK slump in the period from 2008 to 2011 was more dramatic than could be explained just by increased sector lengths, a result of the financial crisis and increased LCC competition, the RASK increase of 2013 totally bucks the trend. 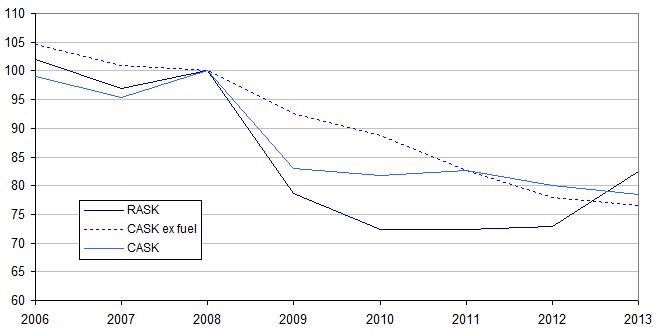 Aegean Airlines index of operating cost per ASK and total revenues per ASK (each indexed to 100 in 2008) against average sector length (km) for the period: 2006 to 2013 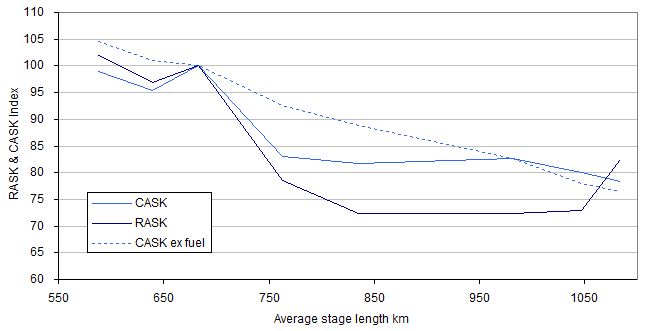 The RASK increase in 2013 appears to have been the result of strong demand for tourism in Greece from international passengers and was helped by Aegean’s capacity restraint in 1H and the capacity reduction of Olympic in the domestic market. As competitor capacity grows, for example from LCCs such as Ryanair (both on international and domestic markets), it may be difficult to repeat this RASK performance in 2014.

This challenge is acknowledged by Aegean, which aims to develop ancillary revenues per passenger and to focus on further cost reduction (partly as a result of Olympic synergies). The carrier also aims to capitalise on its membership of the Star Alliance, presumably to maintain, or increase, load factor through feed from partners and thereby to support RASK.

See related report: Aegean Airlines returns to profit in 9M2013. Olympic cost synergies will be key to next step up

Aegean plans to continue to prioritise expansion on international markets and says that the early indications for tourism demand in 2014 are “very positive”. Twelve new international destinations will be added from Athens in 2014: Birmingham, Marseille, Nantes, Zurich, Hamburg, Copenhagen, Catania, Abu Dhabi, Beirut, Stockholm, Amman and Izmir. This is likely to lead to further increases in average sector length.

In 2014, the key will be to ensure that any RASK weakening is offset by CASK reduction, while managing the integration of Olympic in to the Group.