ACI World has voiced its concerns about the health of the global air freight market, noting that while passenger growth “continues to weather the storm of economic uncertainty, global freight traffic appears to be less enduring”. ACI’s newly appointed Economics Director, Rafael Echevarne, commented, “as major economies wait for the outcome of sovereign debt issues to unravel particularly in the Euro zone area, international trade in air freight appears to be on the side-lines. If the uncertainty persists into the last quarter of 2011, we are likely to see growth rates in negative territory for freight traffic.”

The air freight performance in September showed overall declines for much of the developed world. Year-on-year freight growth remained in negative territory for the fifth consecutive month at -3.7%. ACI said, “With business confidence eroding in an uncertain economic climate, this sentiment is partly reflected in the freight data." 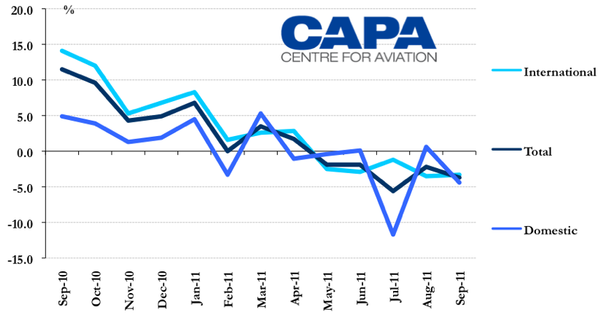 Overall passenger traffic “remains unfettered”, with year-on-year growth reaching 4.8% in September. The growth is attributed to a buoyant rise in international travel where traffic has grown by 6.6%. 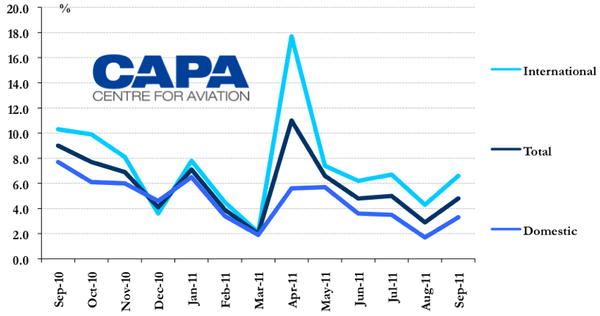 In a statement that closely parallels IATA’s recent market observations, ACI-EUROPE issued a press release that also revealed stability in the passenger sector but a downward and accelerating drop in European cargo traffic.

Olivier Jankovec, ACI-EUROPE’s Director General, said, “September has seen the gap between passenger and freight traffic only get bigger (a gap of 10.8%), with freight now stuck in a sustained downward trend which looks very similar to what we experienced back in 2008.”

In looking at the fastest growing European airports as grouped by traffic, there was a clear pattern that emerged.

For group 1 airports with passenger counts in excess of 25 million per annum, there was an overall growth rate of 6.5% in September 2011 as opposed to the same month in 2010. The star performers were Istanbul Ataturk (+22.5%), Barcelona (+17.7%), Amsterdam (+10.2%) and Paris Orly (+9.3%). Istanbul, fueled by the ongoing growth of Turkish Airlines, continues to set the pace for this group with no near-term slackening foreseen.

The overachievers are mainly located in Turkey, Russia and points in Eastern Europe. Macedonia’s Ohrid is located only 71 miles form Skopje and handles primarily charter traffic. The airport is managed by TAV, the company that also operates Istanbul’s Ataturk and has managed to attract seasonal traffic from a number of European points but still has very small numbers.

Barcelona’s growth closely parallels that of Vueling, based at the airport and a similar link can be seen at Domodedovo because of Transaero.  Most of the airports making the list in September previously appeared as growth trends shift to the south and east in Europe.

There are also different patterns of growth. Paris’ Orly displays growth throughout 2011, but in a pattern that very much resembles previous years, with peaks and declines moving as expected. 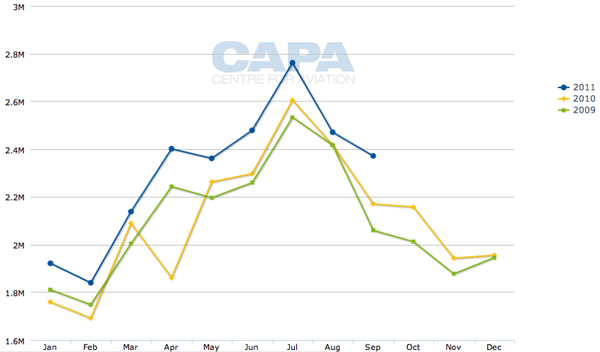 A different picture is revealed by a similar chart for Venice. In the case of its airport, there is a similar track being followed but with an exponential increase in 2011. Interestingly, some of the new capacity comes from others in the high growth group. Moscow has 14 weekly services in 2011 as opposed to 7 last year, with the same increase seen for Istanbul, and Kiev has gone from 5 to 7 weekly flights. 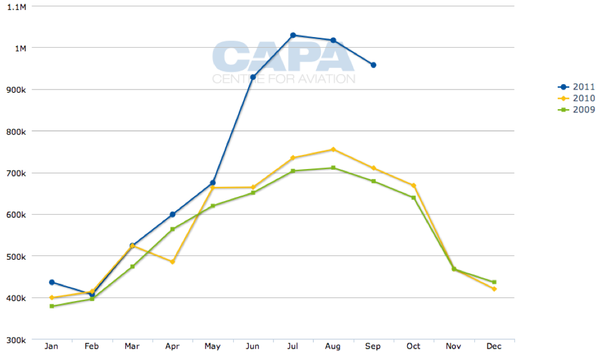 And finally, looking at Istanbul’s Ataturk, we see a completely different trajectory in 2011, differing significantly from the previous 2 years; signaling a more structural change in the airport’s growth. 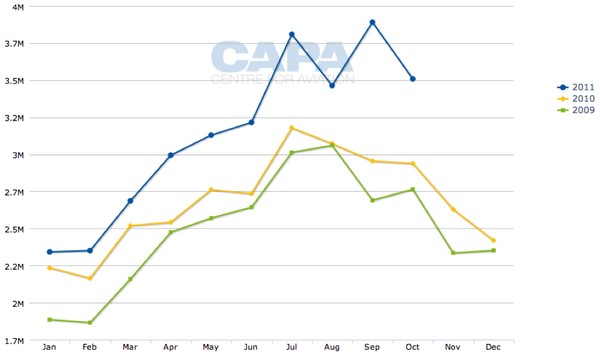 The high achievers in Europe reflect not only a shift in the traffic patterns, but also an exceptional rate of growth for airports located away from traditional gateways.

The region as a whole though has some major problems to overcome. The political maneuvering in coming weeks will be crucial.