A minor dip in output has harmed Boeing’s first half profit, but the US manufacturer is confident of reaching its full year forecast and is riding high on strong ordering at the recent Farnborough Airshow. Boeing reaffirmed its full-year guidance for revenue, earnings per share, and operating cash flow, but has cut its outlook for capital expenditures.

First half revenue dropped 9% year-on-year, to USD3.7 billion, a decline of almost USD3 billion. Earnings were less affected, down 3% to USD2.5 billion. Boeing’s operations are evenly divided between commercial aircraft and military systems.

Boeing described the result as “solid”, but revenue from its Commercial Airplanes business declined 12% to USD14.9 billion. Aircraft deliveries dropped from 246 to 222, due to lower widebody deliveries and challenges related to seat suppliers, namely the fallout from Koito Industries' falsification of safety data. Boeing cut B777 output levels in 2009.

Overall earnings from operations were up 10%, to USD1.4 billion, thanks to a stronger second quarter. Margin fell 0.5 percentage points from a year ago to 9.2%.

Boeing booked a total of 88 gross orders in the second quarter, as well as 20 cancellations, a problem that continues to dog the manufacturer. The ordering environment however has significantly improved from the same period last year, when Boeing recorded just five new aircraft orders. The company’s backlog stands at a healthy 3,304 aircraft, dipping by just 0.4% to stand at USD297.6 billion.

Boeing’s defence business reported a slightly better revenue environment, with sales down 5% to USD15.6 billion. Earnings from its military unit were down though, declining 13% to USD1.4 billion. Changing national security priorities and reduced expenditures are expected to result in job losses for Boeing’s defence companies.

Full-year revenue is forecast at USD64-66 billion, but operating cash flow will be zero. Boeing Commercial Aircraft is expected to deliver 460-465 aircraft, approximately 30 less than in 2009. These deliveries are expected to include the company’s first B787s, although Boeing has warned that initial deliveries to All Nippon Airways could slip to 2011. Initial B747-8 deliveries have already been shifted to 1Q2011. Operating margins for the commercial aircraft unit are forecast at 7.5% to 8.5% an increase of 1 percentage point, reflecting the return of commercial traffic.

Revenue is projected to increase in 2011, on the back of steadily building B787 and B747-8 deliveries. Boeing announced it is deferring USD200 million of capital spending on the B787 second assembly line from 2010 to 2011.

Boeing is also ramping up production of its popular B737NG, from 31.5 per month to 35 per month, although the increase will not occur until early 2012. Most production increases may be forthcoming, provided suppliers can ensure they will be able to keep pace with higher demands. Supplier talks are expected to conclude by year's end. Both the B747-8 and B777 are candidates for higher output. 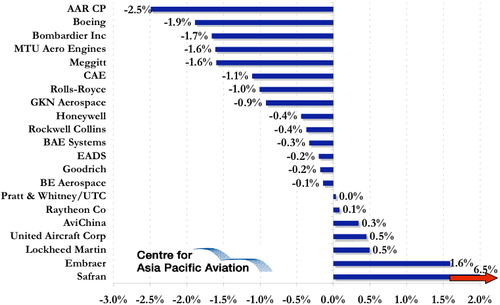 Swire pulls out of HAECO bid

In other news, Swire Pacific, parent of Cathay Pacific Airways, announced it has abandoned plans to acquire HAECO, the Hong Kong MRO provider, after failing to win shareholder support for its bid. Swire offered a 25% market premium on HAECO shares, and owned 46% of the company when it made the offer. HAECO shares dropped 1.9% at the close of trading yesterday. 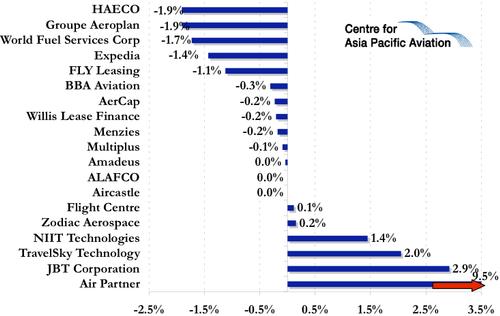