WestJet CEO, Sean Durfy, upon the release of the carrier’s Dec-2009 traffic results, stated it expects 4Q2009 RASM to be “in line” with its previous guidance of an 11-13% decline.

However, this is an improvement from a 15.5% decline in 3Q2009. Mr Durfy, in late Dec-2009, stated the airline is “still nervous” about the general outlook for the North American economy, adding, “it’s tough and it’s going to be tough”. The CEO, who added that the carrier is still seeing the effects of the recession, stated he expects a recovery in either 2Q2010 or 3Q2010.

Versant Partners, meanwhile, raised its stock target for WestJet, which experienced a 9% share price reduction in 2009, from CAD14 to CAD16, on expectations of traffic and unit revenue improvements in 2010. Air Canada’s share price was much worse affected in 2009, losing 30% of its stock market value last year. 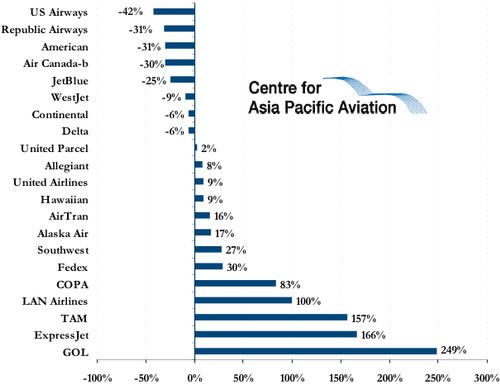 The recent revenue softness for WestJet is attributed to the challenges experienced in the transition to the new SabreSonic reservations system (WestJet has stated its transition to a new reservation system will negatively affect its 4Q2009 revenues) and also reflects a reduction in the airline’s average fare.

Mr Durfy previously stated WestJet is now offering more fare sales than in the past, as passengers continue to use discretion when purchasing fares amid the global financial downturn and competitor, Air Canada, adopts aggressive pricing strategies.

However, the fare reductions have helped the Canadian LCC report a record load factor of 81.7% in Dec-2009, a 0.8 ppt year-on-year improvement and at the higher end of the carrier’s “optimal” operating range of 78-82%. The carrier commented that it is “very pleased” with this load factor result. 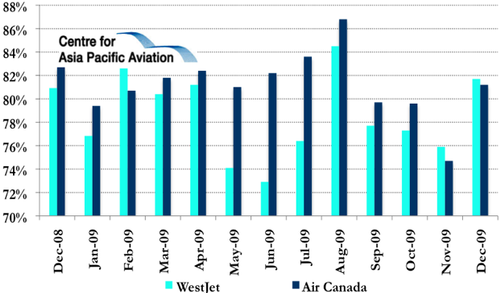 The LCC, while not disclosing monthly traffic numbers, stated it transported 42,000 additional guests in the “busy” travel month of Dec-2009, compared to the same month in 2008, with the carrier adding that it has benefited from WestJet Vacations’ increased popularity, a number of new vacation destinations and “considerable progress” in its call centre service levels since its reservation system cutover in Oct-2009.

In the full year, WestJet reported an average load factor of 78.7%, a 1.4 ppt reduction, as the carrier’s 2.6% capacity (ASMs) growth exceeded its traffic (RPMs) growth.

This capacity growth is expected to continue, with the carrier unveiling five new routes and expanded frequencies on 19 existing routes as part of its Summer 2010 flight schedule. It plans to receive a further five aircraft in 2010, for a total of 91 aircraft. The carrier also stated that it hopes to operationalise its codeshare agreement with Southwest Airlines in 2010, in addition to its Air France-KLM agreement, adding that there could be “two to four other partners”.

Air Canada is now growing its capacity again, after well over a year of contraction. During Dec-2009, Air Canada’s capacity (ASMs) expanded by 4.0%, for two consecutive months of capacity growth.

This represents the fourth consecutive month of year-on-year load factor reductions for the Canadian flag carrier, indicating that its return to capacity growth is occurring earlier and at a greater extent than current demand supports. 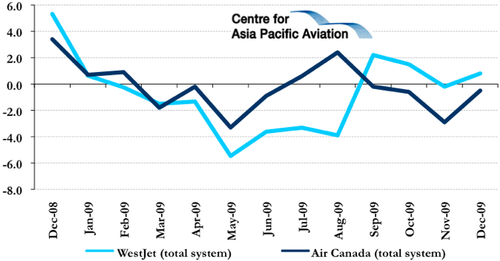 Meanwhile, Air Canada’s 3.4% traffic (RPMs) growth in Dec-2009 represents the first month of traffic growth in over 16 months. The largest traffic reduction in this period was reported in Mar-2009, of 13.1%, the same month that the carrier reported its largest capacity (ASMs) reduction of 11.3%. 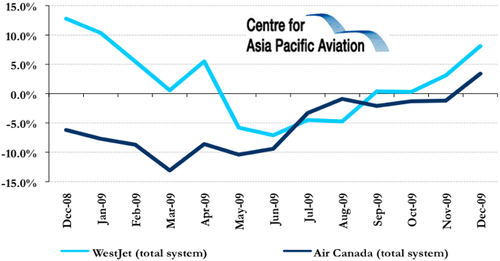 Outlook: Conditions on the improve, but a prolonged recovery period expected

Canada’s two major carriers, Air Canada and WestJet, have not been immune to the global economic crisis, although WestJet has managed to be one of only a few profitable airlines in North America during the downturn (Air Canada was profitable in 3Q2009 but was unprofitable in 1H2009).

While the outlook for 2010 is more positive than 2009, both Air Canada and WestJet are expecting a prolonged recovery period.  Air Canada’s CEO, Calin Rovinescu, in Dec-2009, stated he expects it will “take a full year for the business travel to get to levels that are sustainable, while WestJet is foreseeing a recovery in 2Q2010 or 3Q2011.

However, in the lead up to this recovery, conditions will likely show continuous signs of improvement in what, according to Mr Rovinescu is likely to be a “transformational year” for Canadian aviation. He added that Air Canada expects to see less discounting on fares in 2010, as the carrier aims to boost revenues by USD95.8 million, with WestJet expected to follow suit to repair its unit revenue profile.