North and South American LCC stocks were mixed on Wednesday (08-Sep-2010), with Air Tran and JetBlue weaker (shares slipping 1.7% and 1.1%, respectively) and Southwest, WestJet, Allegiant and GOL all gaining.

Also yesterday, Southwest and GOL became the first LCCs in the Americas to report yield data for the month of Aug-2010.

Southwest Airlines continued to report double-digit RASM growth in Aug-2010, with RASM estimated to have increased in the 15-16% range. Also in the month, the carrier handled 9.5 million passengers, a 7% year-on-year increase, revenue per passenger increased 3.4% to 7.8 million, with an average load factor of 82.3% (+2.1 ppts).  Shares in the carrier increased by 0.6% yesterday.

Meanwhile, GOL reported yields of USD 11.01 cents in the month, while RASK was flat for the period, with the carrier commenting that the results reflect the “substantial increase in passenger revenue do to higher demand”.

Also in the month, passenger traffic (RPKs) reached a new record, gaining 34%, with an average load factor of 69.9%, a sizeable 10.8 ppt year-on-year improvement. The carrier stated it benefited from the carrier’s “dynamic management of the new fare categories, which aimed to encourage demand by offering cheaper fares for passengers who book in advance”.  Shares in the Brazilian LCC gained 2.8% yesterday. 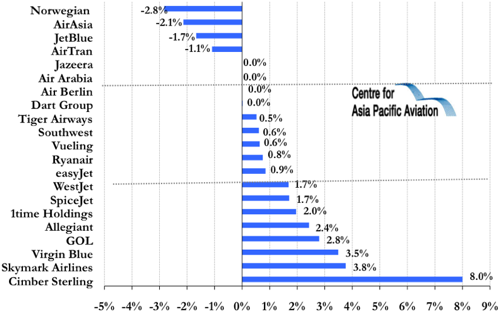