WIDEBODIES ARE A SMALL proportion of the global LCC fleet, but orders are high relative to the number in service with LCCs, particularly in Southeast Asia and Western Europe (already the two leading regions for LCC widebodies in service).
Of the 22 LCCs operating widebodies, 17 are in Asia Pacific or Europe. The world’s biggest LCC widebody fleet is currently operated by Norwegian, followed by Air Canada rouge, a rare North American long haul low cost operator, and AirAsia X, which is one of only six LCCs that operate widebodies exclusively.
A330 variants are the most popular widebodies in service and on order with LCCs, followed by 787 variants.
This report presents a detailed analysis of data on the LCC widebody fleet and aircraft orders from the CAPA Fleet Database.

Southeast Asia is the world’s leading region for widebody LCC operation
According to the CAPA Fleet Database, there are 175 widebody aircraft in service with low cost airlines as at 06-Apr-2018. This compares with 136 at the end of 2016 and 115 at the end of 2015, so there has been a 52% increase in just over two years.
The largest widebody LCC fleet is to be found in Southeast Asia, which accounts for 64 aircraft, followed by Western Europe (40) and North America (29). Asia Pacific overall has 88 LCC widebodies, almost half of the global total, and Europe has 48.

Widebodies operated by twenty two LCCs, led by Norwegian, Air Canada rouge and AirAsia X
According to the CAPA Fleet Database, there are 22 low cost airlines operating 175 widebody aircraft as at 06-Apr-2018.
The database reveals the biggest LCC operator of widebodies to be Norwegian, with 27 Boeing 787s (eight 787-8s and 19 787-9s; including Norwegian Air Shuttle, Norwegian Air International and Norwegian Air UK).
Second is Air Canada rouge (the low cost subsidiary of the largest Canadian airline), which has 25 767-300ERs. Ranked third is AirAsia X, the long haul brand of the AirAsia Group, which has 22  A330-300Es).
The only other LCCs with double digit widebody numbers are Scoot (ten 787-8s and six 787-9s) and Jetstar (eleven 787-8s).

Only six LCCs have all-widebody fleets
Only six of the 22 airlines are 100% widebody operators. Three of these are AirAsia X and its affiliates Thai AirAsia X and Indonesia AirAsia X, which all operate A330-300 variants.
The other three widebody-only LCCs are Bangkok-based NokScoot, which operates four 777-200ERs, Cairo-based Air Leisure, which operates two A330-200s; and the Paris Orly-based French Blue, a subsidiary of Groupe Dubreuil, which has one A330-300E and two A350-900s.
After these six, there are three airlines where widebodies form more than one third of the fleet: Air Canada rouge, Scoot and Onur Air.
At Air Canada rouge, widebodies are half of the total fleet (in addition to its 25 767s, it also operates 25 A320 family aircraft).
Widebodies are 38% of Scoot’s fleet (alongside its 787s, it also operates 26 Airbus A320 family aircraft) and 36% of the fleet for Turkish LCC Onur Air (it operates 14 A320 family aircraft, in addition to eight A330s).
For each of the remaining 10 LCCs, widebodies account for less than 20% of the total fleet.

WIDEBODY AIRCRAFT NUMBERS IN SERVICE WITH LCCs, BY REGION* 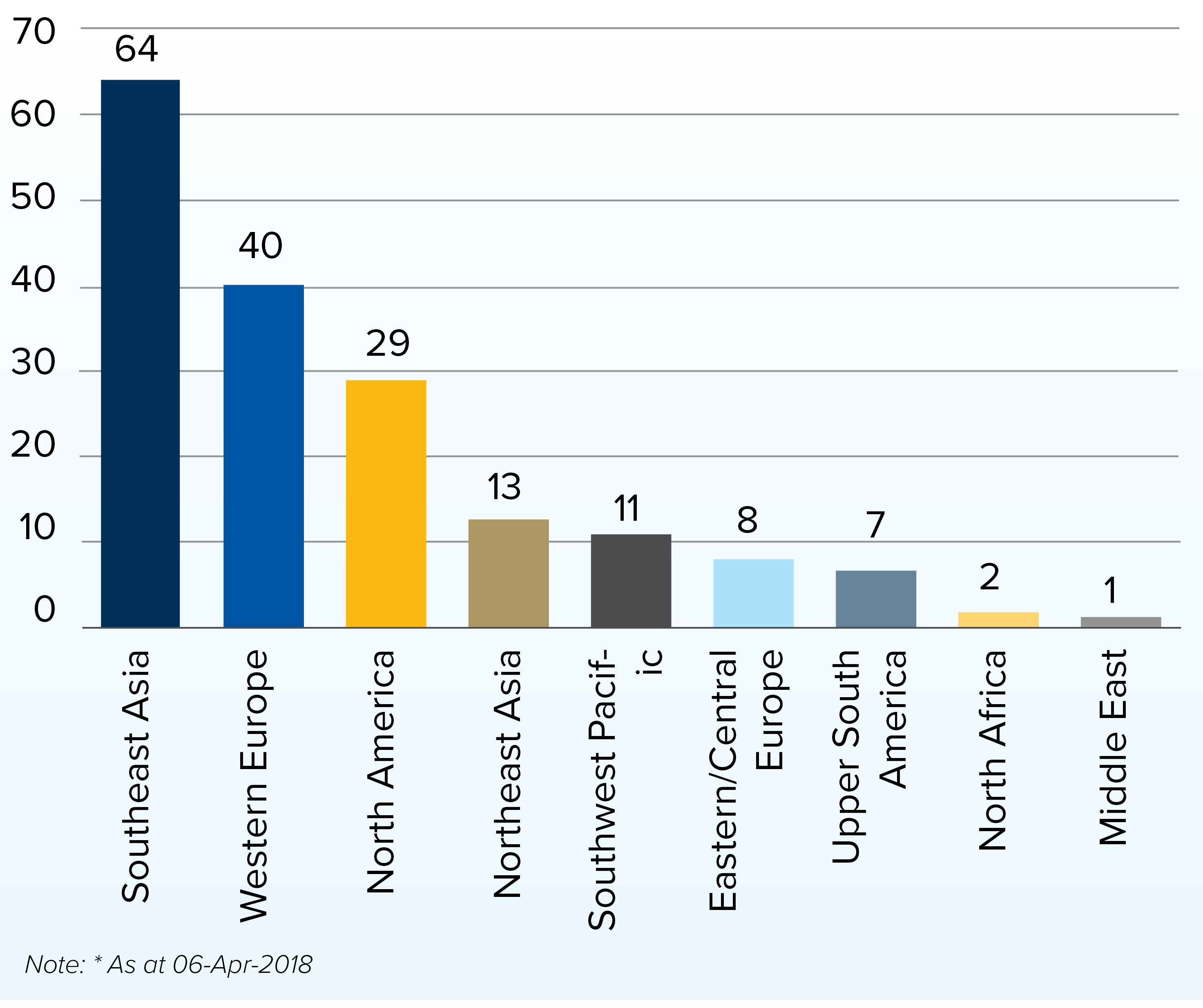 WIDEBODY AIRCRAFT NUMBERS IN SERVICE WITH LCCs, BY AIRLINE* 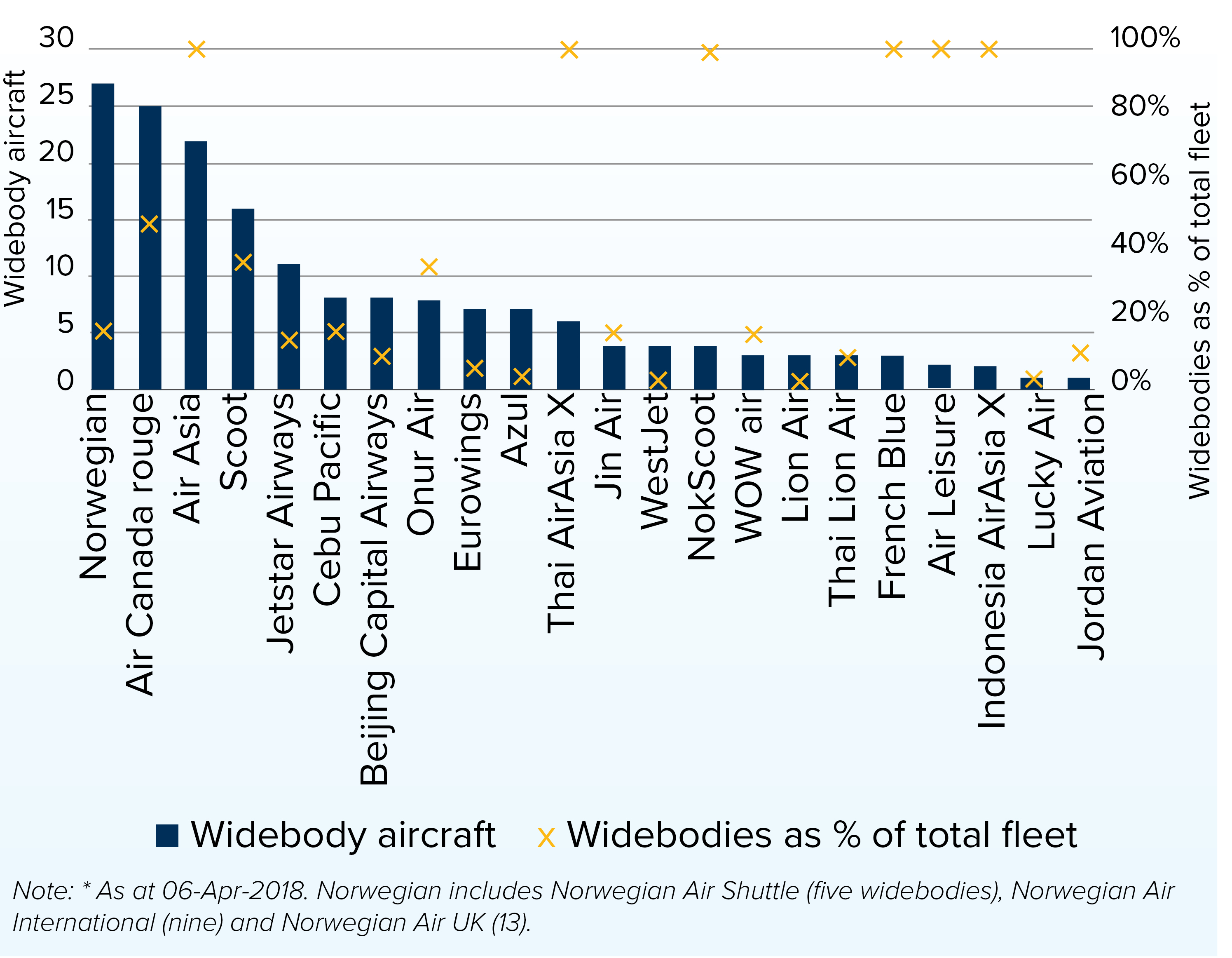 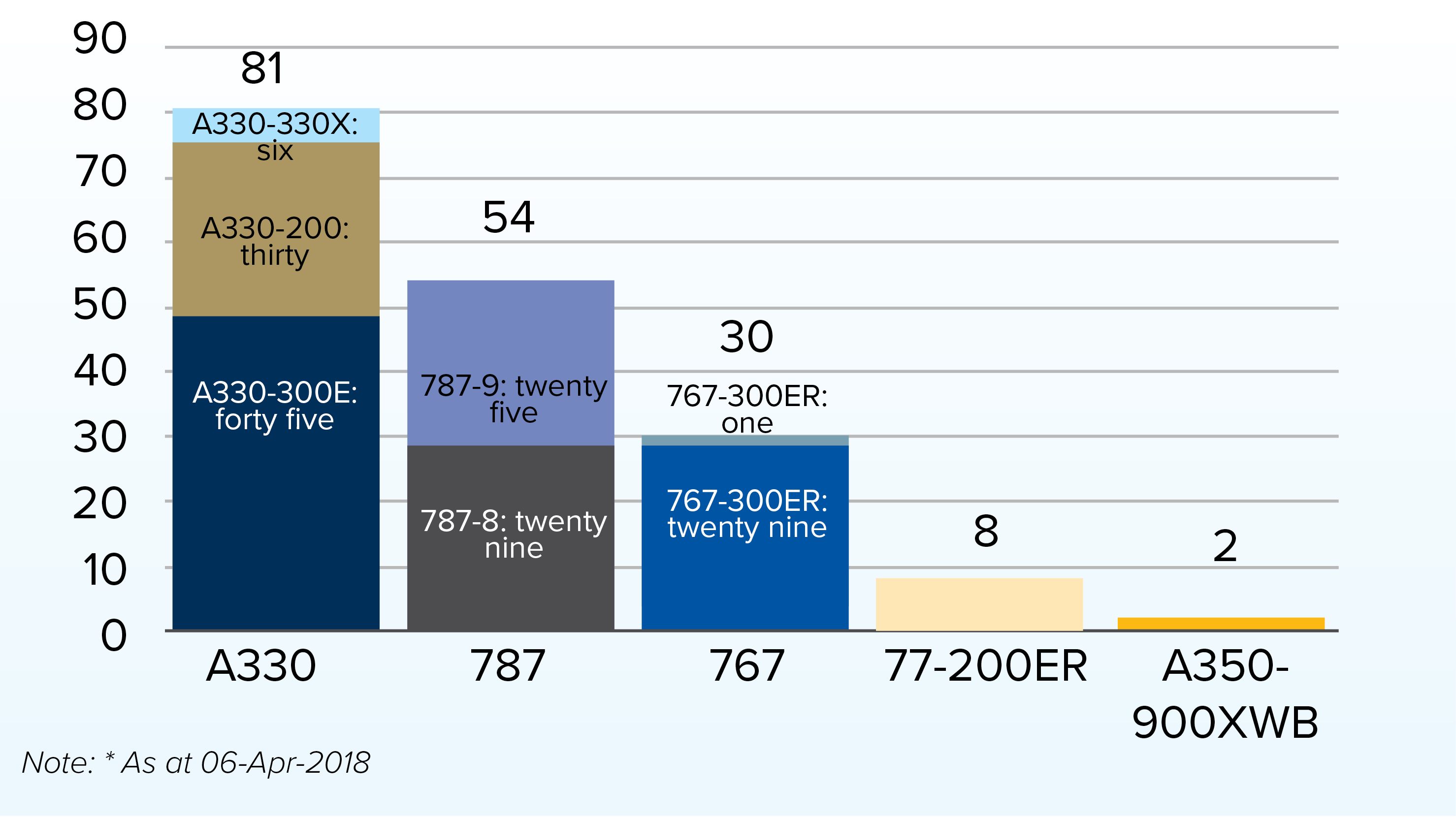 PROPORTION OF WIDEBODIES IN GLOBAL FLEET* 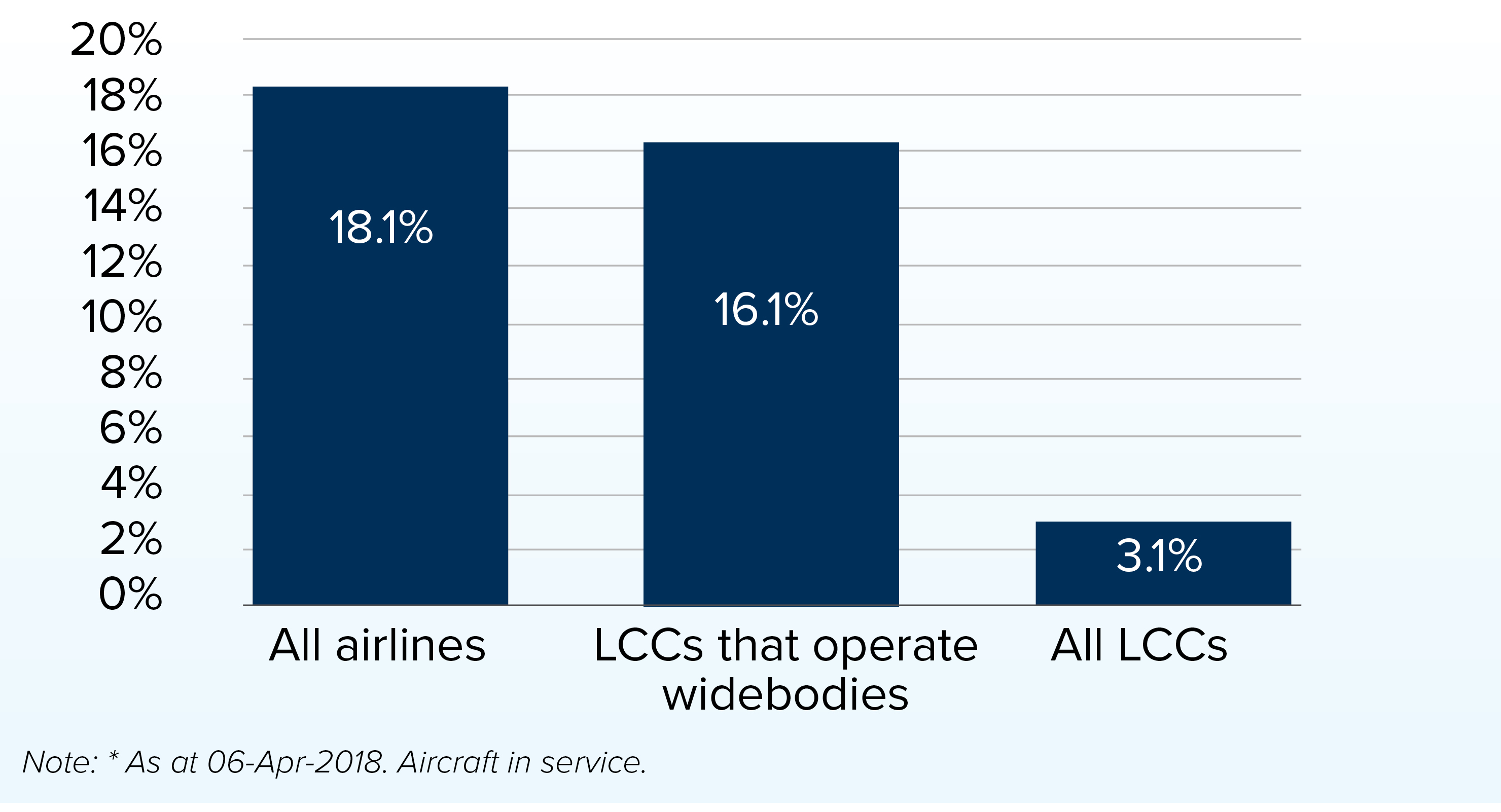 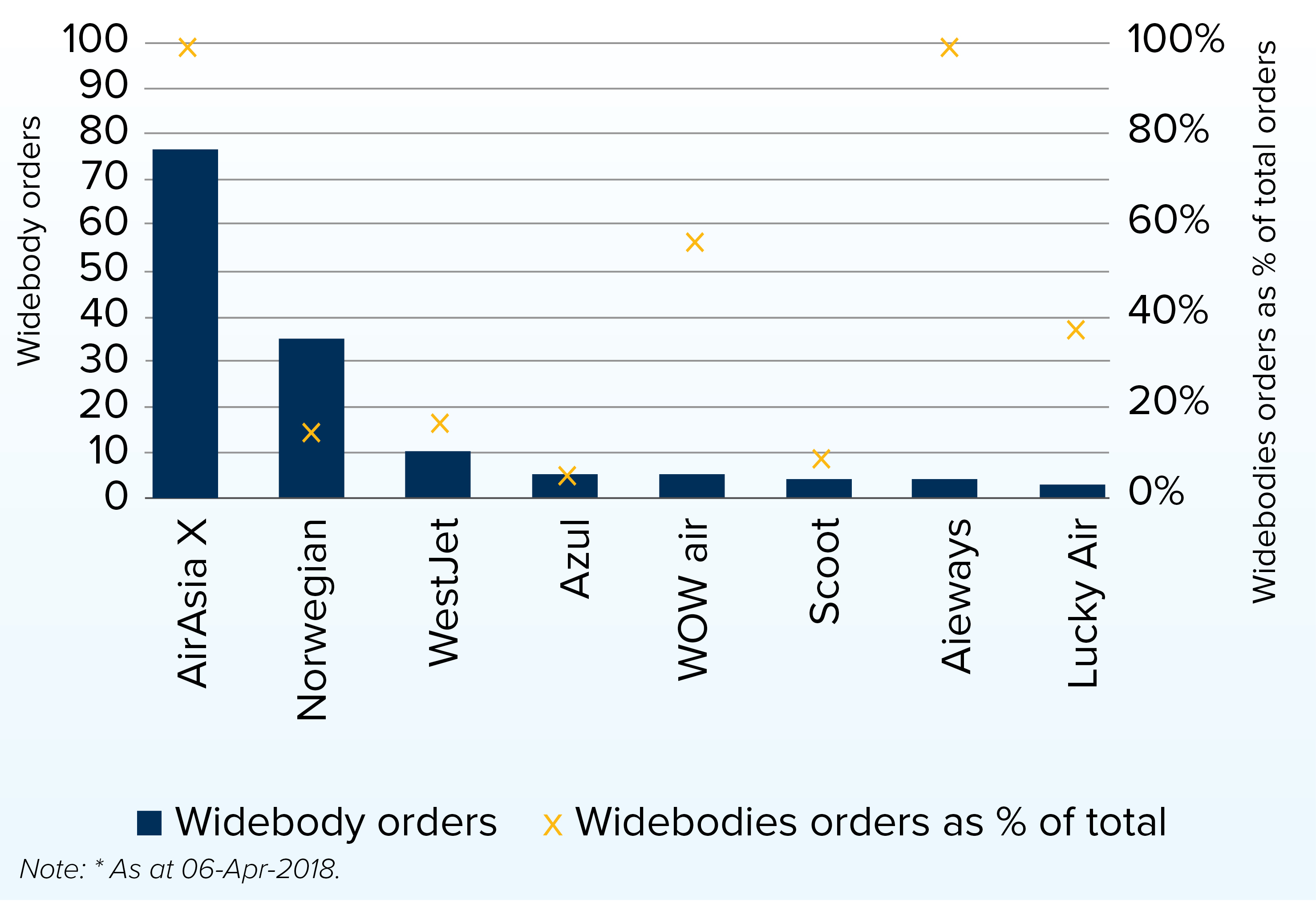 AirAsia X has the highest number of widebody orders among LCCs, followed by Norwegian
The CAPA Fleet Database records 141 LCC widebody aircraft orders by eight LCCs as at 06-Apr-2018.
AirAsia X leads LCC widebody orders, with 76 aircraft in the pipeline, of which 66 are A330-900neos and 10 are A350-900s. AirAsia has more than double the widebody order numbers of Norwegian, which has 35, all for 787-9s.
WestJet has 10 787-9 orders, while the remaining five LCCs with widebody orders have five or fewer on order.

WIDEBODY AIRCRAFT NUMBERS IN SERVICE AND ON ORDER WITH LCCs, BY REGION* 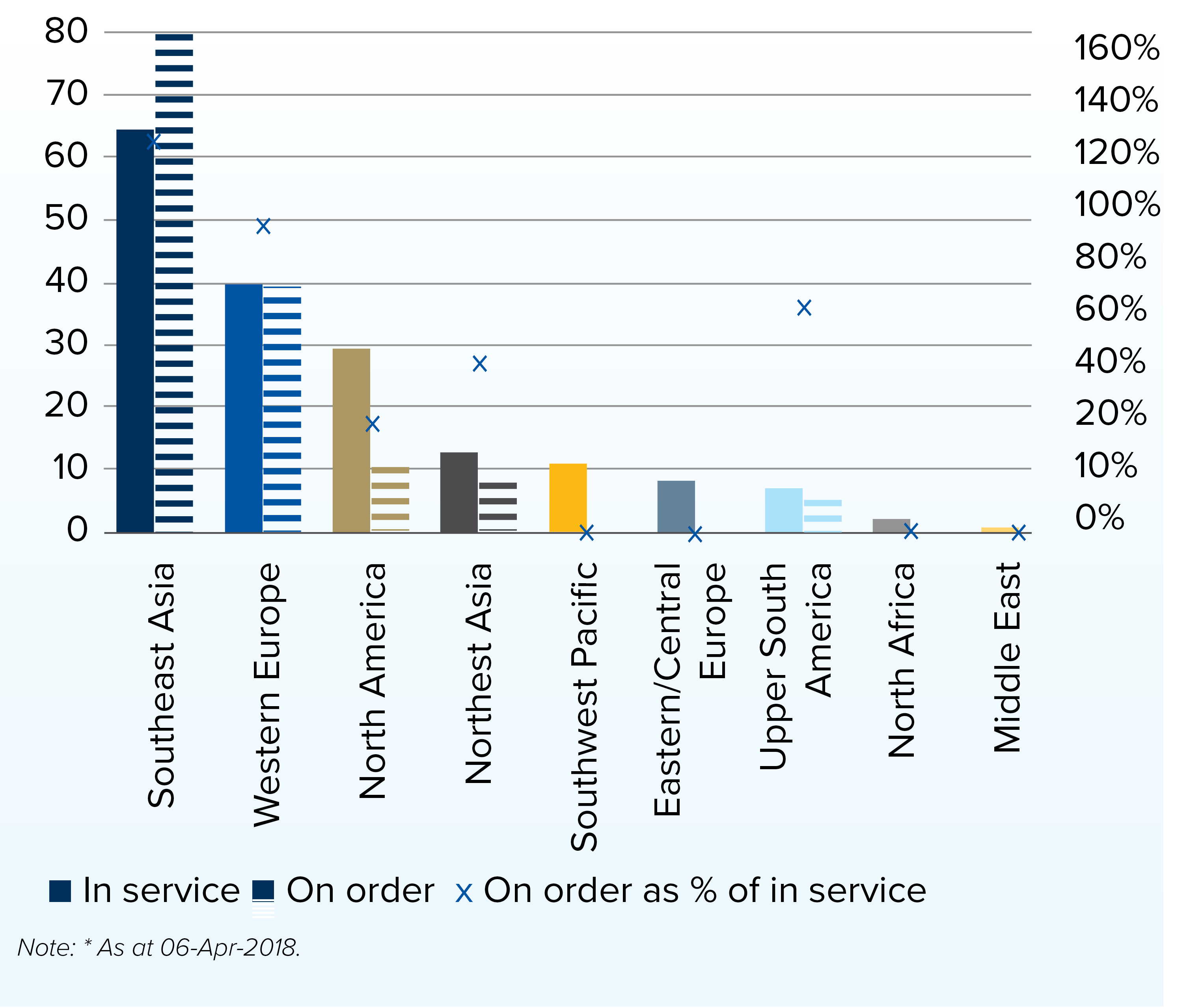 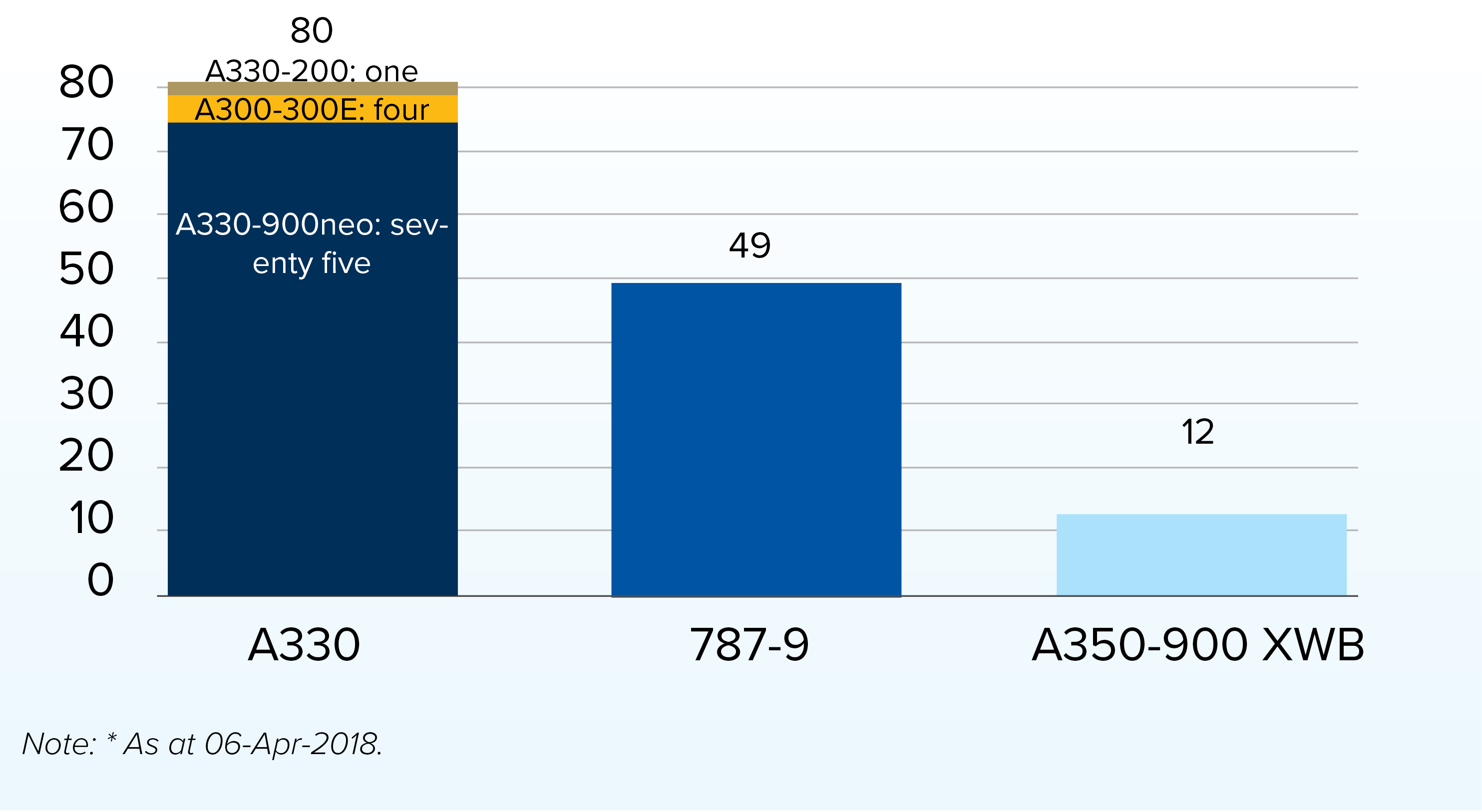 WIDEBODY ORDERS AS A PERCENTAGE OF WIDEBODIES IN SERVICE* 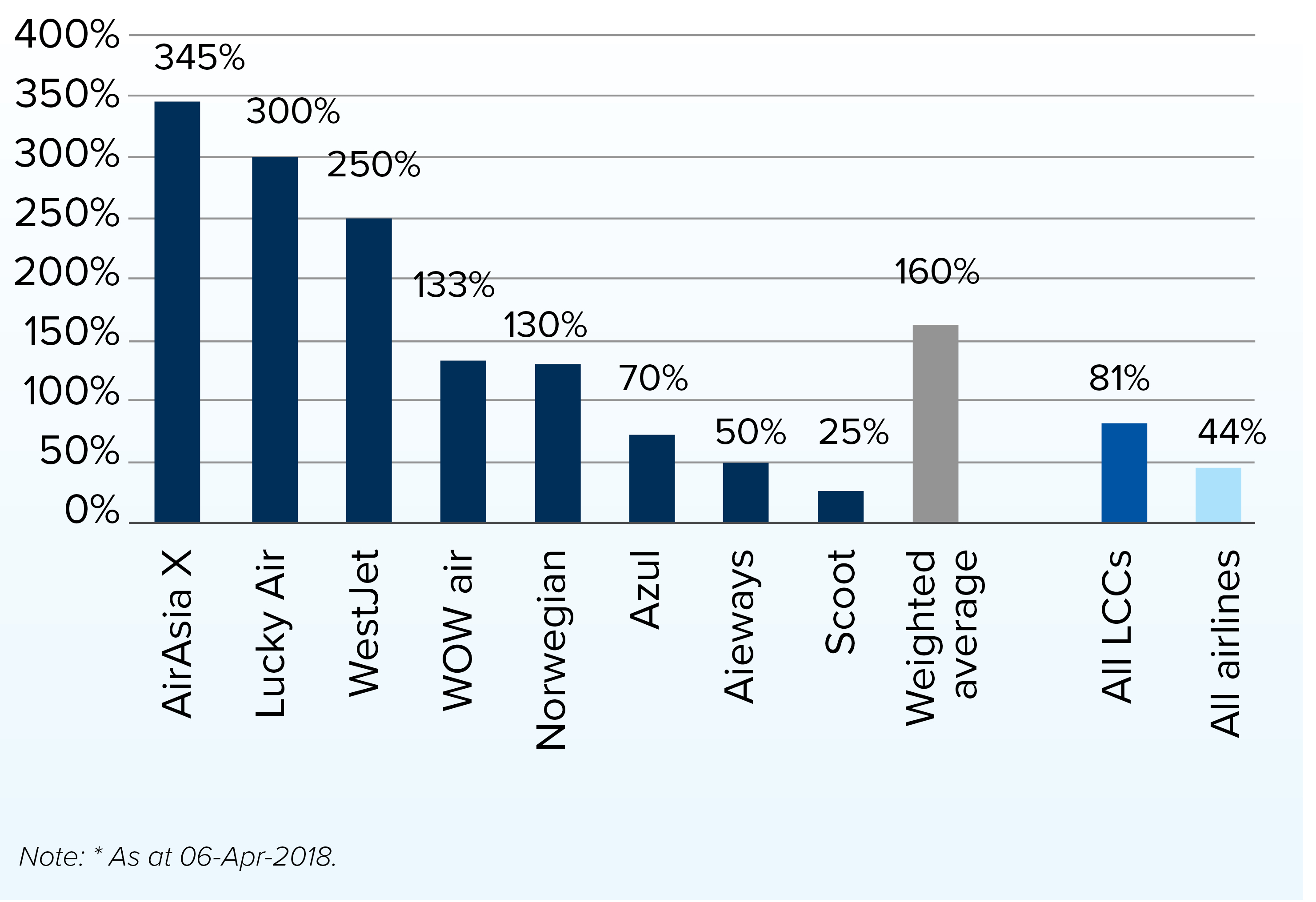 Widebody LCC operation is a niche, but it’s growing
This analysis of data from the CAPA Fleet Database demonstrates that widebodies still make up only a small proportion of the LCC fleet globally.
Nevertheless, the size of the LCC widebody order book is significant, relative to the fleet in service. This is especially so in Southeast Asia and, to a slightly lesser extent, in Western Europe.
This is further evidence that the long haul LCC model has found a niche that is growing (and that is before taking into account the growth of intercontinental narrowbody operations by LCCs).