The experience with a decade of North Atlantic airline joint ventures

ONE OF THE MANY unanticipated consequences of the uncertainties raised by Brexit has been the increased regulatory scrutiny of North Atlantic airline joint ventures. Members of these JVs are allowed to coordinate schedules and prices only, with regulatory immunity from competition rules.

In Oct-2018 the UK’s Competition and Markets Authority (CMA) launched an investigation into the JV inside oneworld between British Airways, Iberia, Finnair and American Airlines. The JV was approved by the European Commission in 2010 after JV members gave commitments to release slots to competitors on six city pairs: London-Dallas, London-Boston, London-Miami, London-Chicago, London-New York and Madrid-Miami.

The commitments expire in 2020, after the UK’s scheduled exit from the EU, and five of the routes touch the UK, hence the CMA’s investigation ahead of their expiry. It is expected to report in the first half of 2019.

CAPA analysis indicates that there has been only a limited increase in competition, if any at all, on these routes and on the two routes most important to the other JVs (Paris-New York and Frankfurt-New York). Competition investigations are complex, and it would be foolhardy to second-guess their outcome. Importantly, the CMA’s study could prompt other regulators to review the North Atlantic aviation market.

From 2010, when all three of the JVs within the global alliances were in place, to 2018, annual one-way capacity between Europe and North America increased by more than 15 million seats, to almost 54 million (source: OAG Schedules Analyser). Note that this treats all JV members’ capacity as if it had been in the JV for the full year from the year of formation.
The number of seats operated within JVs that are antitrust immune increased by 10 million, to 39 million, both through organic growth and through expansion of JV membership. 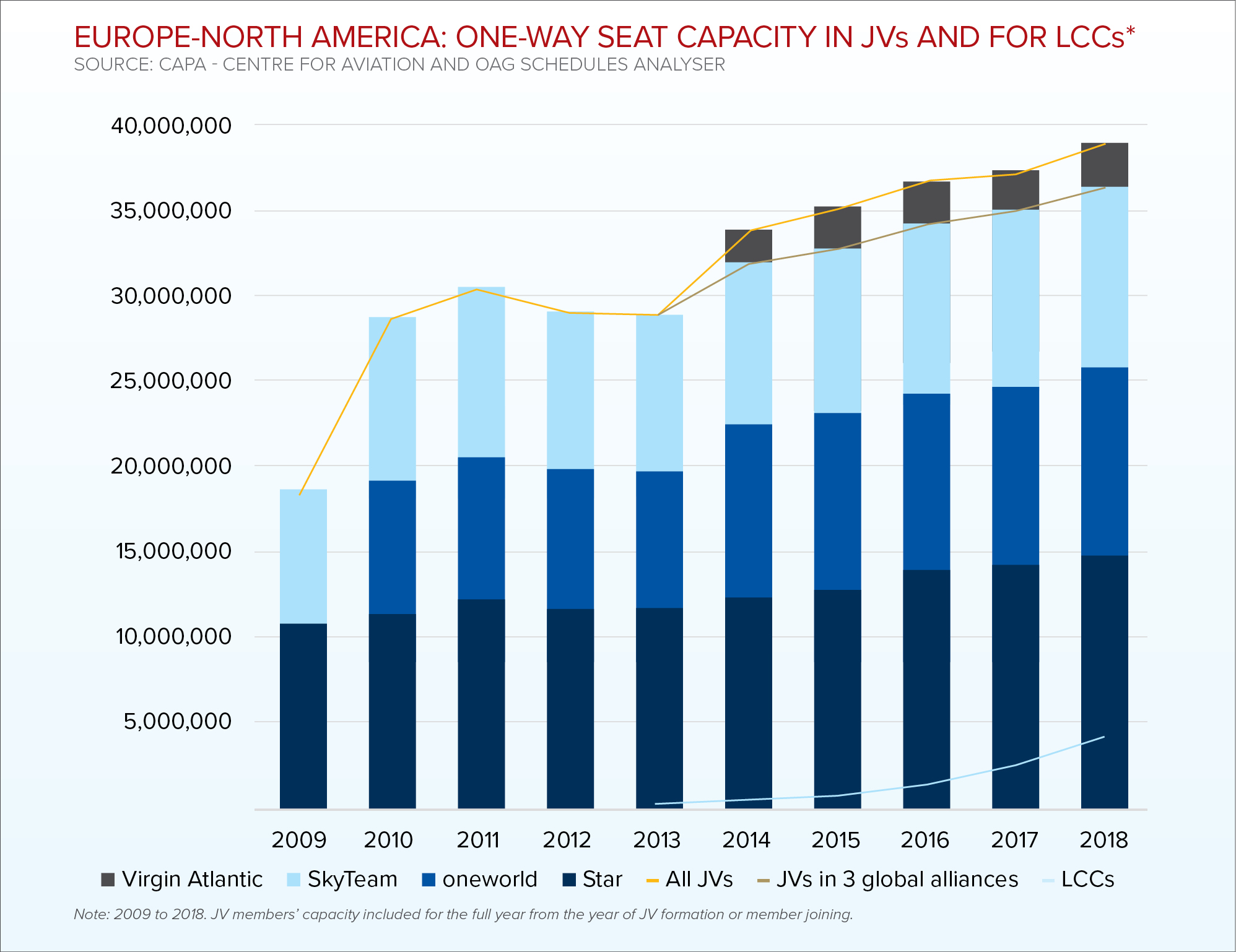 In particular, Finnair joined the oneworld JV formed in 2010 by British Airways, Iberia and American in Jul-2013 and US Air joined in summer 2014 (as part of its acquisition by American).
The JV within Star, consisting of Lufthansa, United, Continental and Air Canada was formed in 2009; it was joined by Austrian Airlines and SWISS in Jul-2011 and by Brussels Airlines in Mar-2012.
Virgin Atlantic joined a JV with Delta in Jan-2014 (and awaits regulatory approval to merge this JV with the SkyTeam JV of Delta, Air France, KLM and Alitalia).
Among airlines not part of JVs, LCCs increased their capacity from almost nothing in 2010 to more than four million North Atlantic seats (one way) in 2018.
Two thirds of 2018’s LCC capacity came from Norwegian, which entered in 2013, while (now grounded) WOW air, WestJet and Eurowings, all new entries since 2014, were the next largest LCCs. 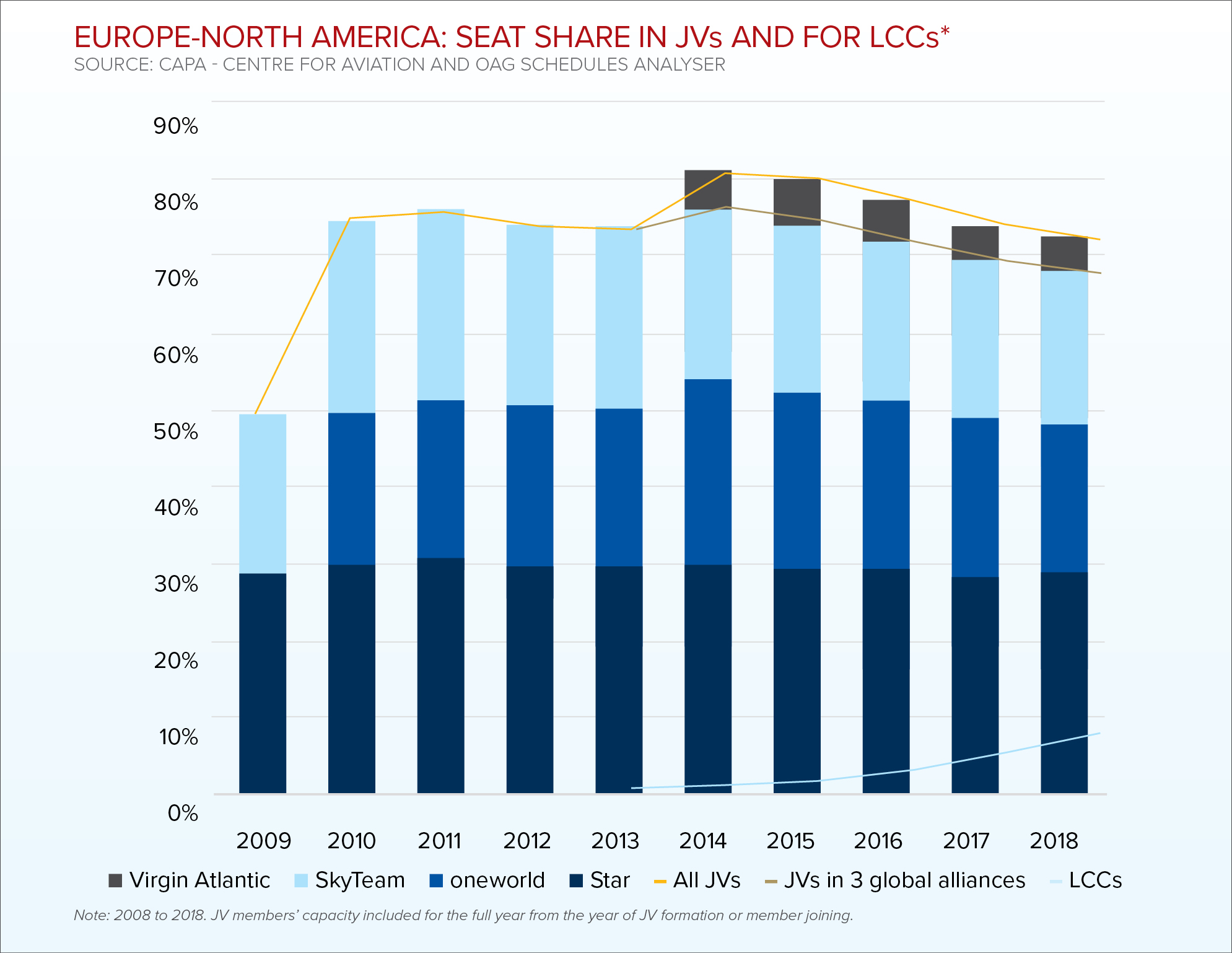 London-New York is the biggest North Atlantic city pair by some distance…
The six city pairs identified by the CMA where the European Commission accepted commitments from the oneworld JV partners in 2010 are all among the leading 25 routes by seats between Europe and North America in 2018.
London-New York is number one by some distance (more than double the seat capacity of the number two city pair, Paris-New York).
London-Chicago is number five, London-Boston is number nine, London-Miami 11th, Madrid-Miami 21st and London-Dallas 23rd.

…and even more dominant in premium seats
Five of these six routes also rank among the top 25 Europe-North America city pairs by premium seats (business class plus first class) in 2018.
London-New York is even more dominant in the premium capacity ranking, with close to three times the premium seat numbers of second placed London-Los Angeles.
London-Chicago is fifth in this ranking, London-Boston is sixth, London-Miami eighth and London-Dallas 11th. Only Madrid-Miami is outside the premium top 25 (ranking at number 39). 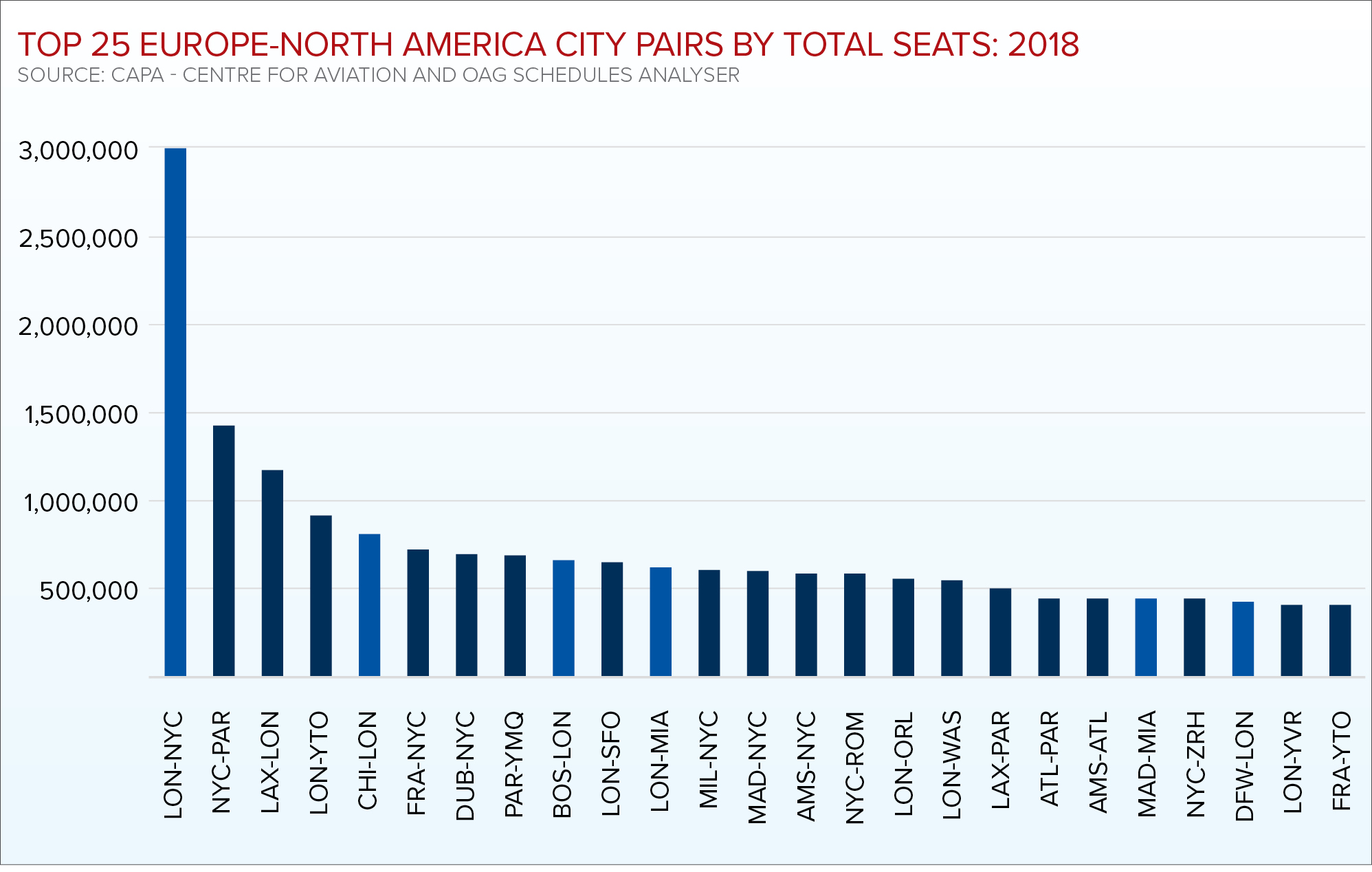 Competition is up on three of the six routes where the oneworld JV gave commitments
Three of the six identified routes experienced an increase in the number of competitors from 2009 (the year before the oneworld JV was established and the commitments were given) to 2018.
On London-New York there was a net increase by one, from seven to eight operators, between 2009 and 2018. Entry by United, Norwegian and Primera Air (none at Heathrow) was only partly offset by the withdrawal of Kuwait Airways and Continental. BA, Virgin, American and Delta operated throughout the period and Air India, which operated and withdrew in 2009, re-entered in 2016.
Schedules data from OAG for 2019 indicate that Air India will again be absent from this market. Coupled with the bankruptcy of Primera Air, the number of operators on London-New York is set to drop to six in 2019 – below its 2009 level.
On London-Boston, the number of competitors grew from three to five over this time frame, with the entry of Delta (2011), Norwegian (2016) and Primera Air (2018) partly offset by the withdrawal of American (2013). In 2018, the new entrants operated alongside BA and Virgin.
Primera Air’s bankruptcy will take the number of operators on London-Boston down to four in 2019, which is only one more than in 2009.
The number of operators on Madrid-Miami increased from two in 2009 to three in 2018, following Air Europa’s entry in 2010 to compete with Iberia and American. These three are expected to remain the only operators in 2019. 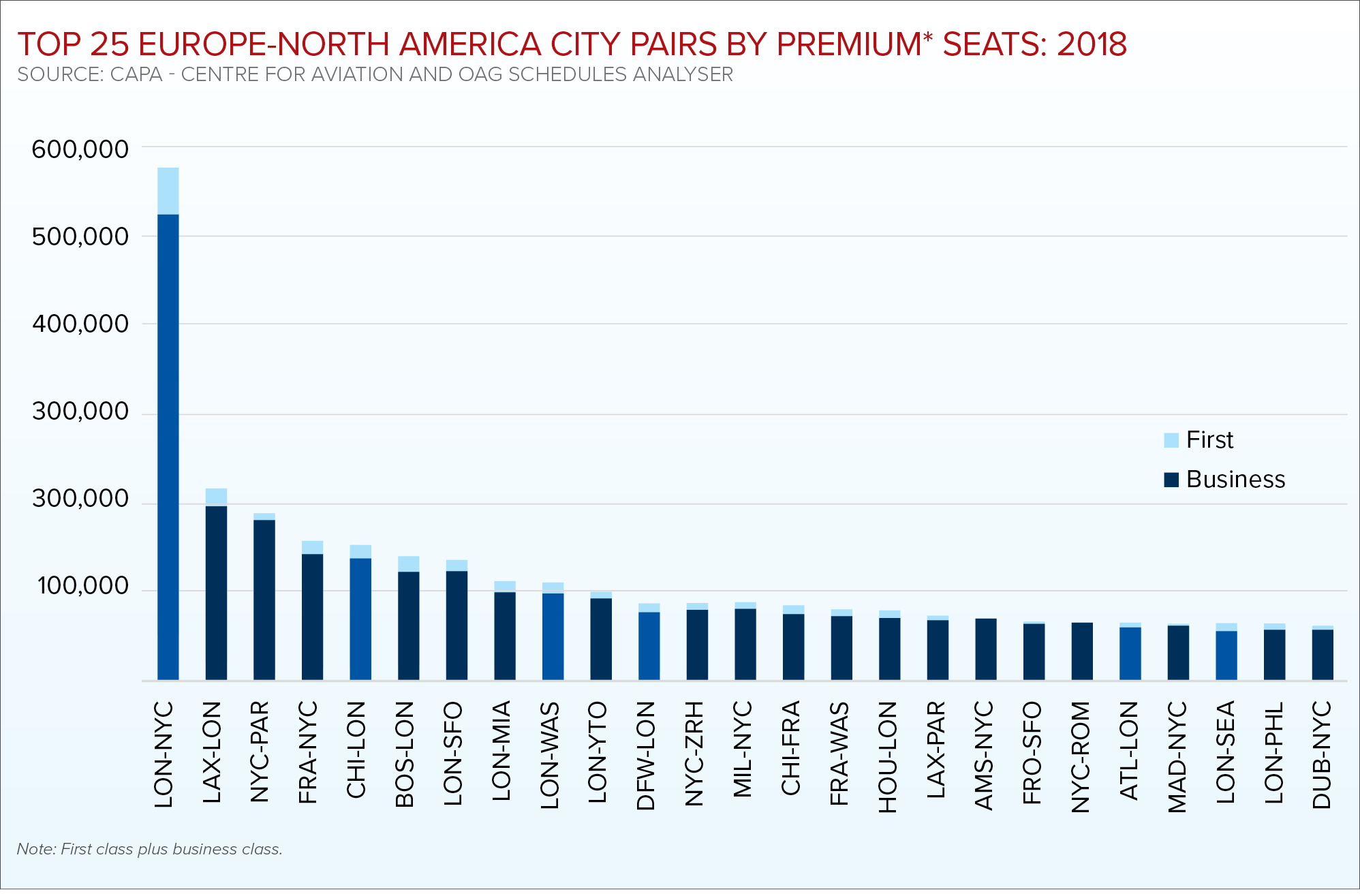 The other three routes had no net change in the number of operators
On London-Chicago, Virgin withdrew and Norwegian entered between 2009 and 2018, keeping the total at four operators (with no changes currently expected in 2019).
On London-Miami, BA, Virgin and American remained the only three operators between 2009 and 2018 (although Delta entered in 2011 and left in 2012), but the total will grow to four this summer after Norwegian enters in Mar-2019.
London-Dallas has remained a BA-AA duopoly throughout (effectively a monopoly, given their JV), with no changes expected this year.

Oneworld JV share only fell on routes where competition increased, but still above 50% on all six
On the three routes where the number of competitors increased between 2009 and 2018, the combined share of the two oneworld JV members on the city pair declined over the period. Where the number of competitors remained the same, the JV share was flat or increased.
The biggest decline was on London-Boston (reduction of 29ppts, to 54%), where there was also the biggest net increase in the number of competitors
Nevertheless, on all six city pairs the JV members had more than half of all seats in 2018.
On one route, London-Dallas, they have had 100% of seats throughout the period and on two more routes they had more than three quarters of seats in 2018 (76% on Madrid-Miami and 80% on London-Miami).
Note that the JV partners are British Airways and American on five of the routes and Iberia and American on Madrid-Miami.

Competition has increased on Paris-New York, but JV share on Frankfurt-New York is up
As a comparison, the chart below shows the evolution of BA/AA’s combined seat share on London-New York with that of the JV partners on the biggest North Atlantic route of each of the other two JVs. In both cases JV partners control more than half of the seats, but the trends over time have differed.
On Paris-New York, the share of JV partners Air France and Delta dropped from 57% in 2009 to 55% in 2018 (although it was as high as 66% in 2011), while the number of operators increased from seven to 10.
By contrast, the number of operators on Frankfurt-New York remained constant at five from 2009 to 2018 and the share of JV partners Lufthansa and United (and Continental until 2012) increased from 58% to 70%. 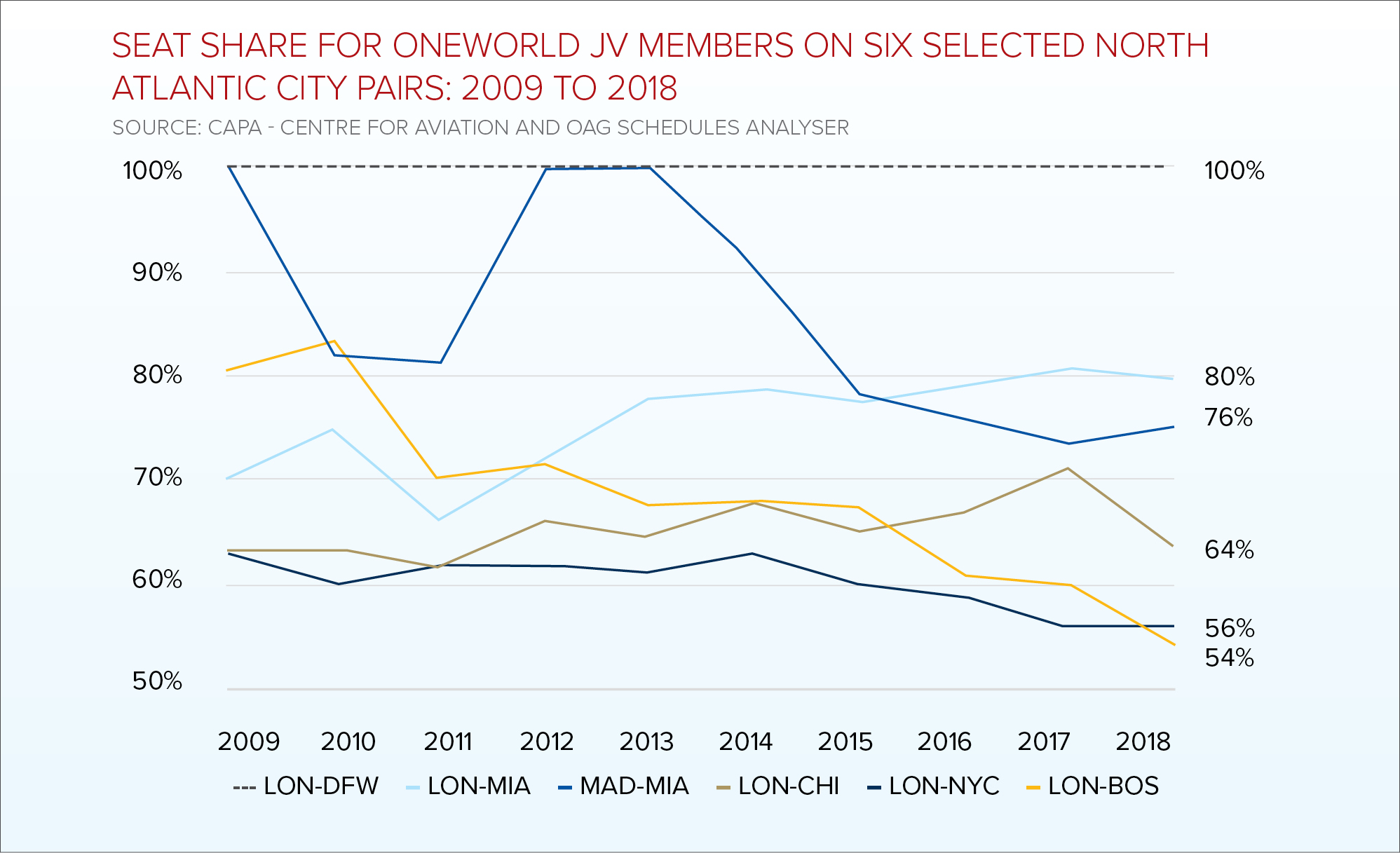 Expect increased regulatory scrutiny of the North Atlantic JVs
This analysis shows that the combined North Atlantic seat share of the immunised JVs has fallen since they all came into being in 2010. The share received a boost in 2014, when Virgin Atlantic formed a JV with Delta, but has declined from 81.3% that year to 72.1% in 2018. Over the same four year period LCC seat share grew from 1.2% to 8.0%, led by Norwegian (5.4% share in 2018) and WOW air (1.6%).
Nevertheless, the share in immunised JVs is still very high, and anecdotal evidence suggests that the JVs have similar pricing algorithms, not surprisingly resulting in similar pricing. The expected entry of Aer Lingus into the oneworld JV in 2019 will boost the total share with antitrust immunity by 2.7% (based on its 2018 share).
Moreover, Norwegian has indicated that it is looking to slow its growth in an attempt to improve its profitability, WOW air is reducing capacity in a restructuring, and the 2018 new entrant Primera Air has gone out of business.
On the five UK routes to the US that are the subject of the Competition and Markets Authority investigation, there is some evidence of increased competition and a reduction in JV share since 2009, the year before the BA/Iberia/American JV was given antitrust immunity. However, on three routes there has been no net increase in the number of competitors and the seat share in the JV has stayed the same or increased. 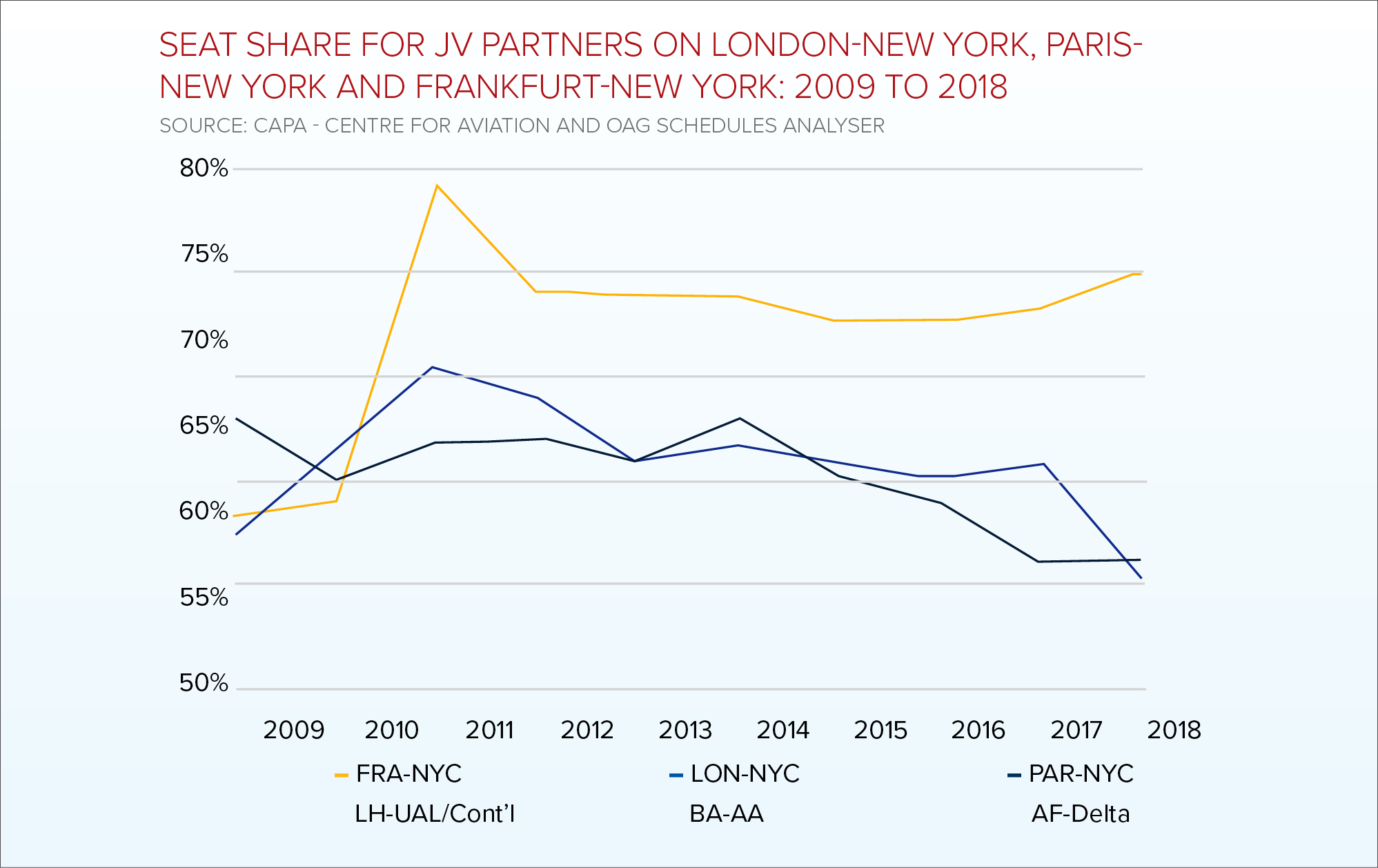 On London-New York – by far the biggest and most lucrative North Atlantic city pair – there has only been a minor decrease in the JV’s seat share.
On Heathrow-JFK, which accounts for broadly two thirds of London-New York seats, the number of competitors has dropped from five to four following the exit of the fifth freedom operator Kuwait Airways in 2016. BA/American’s 2018 share of 61% was only 3ppts below its 2009 level and has actually increased by 2ppts since 2015.

The UK investigation could force others to rethink
The UK competition authority’s investigation could nudge other regulators to have another look at the position of the JVs on the North Atlantic. Paris-New York has 10 competitors, but Air France/Delta still have well over half of seats, and Frankfurt-New York is 70% controlled by Lufthansa/United, whose combined share has increased considerably since gaining antitrust immunity.
The UK probe was prompted by Brexit and focused on UK routes, which will no longer be subject to the European Competition Commission’s authority after the UK leaves the EU.
Brexit could also, at least, pose questions about the relationship between the granting of ATI by the US and the need for an open skies agreement governing traffic rights between the US and the other party.
The UK is expected to sign an open skies style agreement with the US, but the JVs involving BA and Virgin will then fall under multilateral jurisdiction (the US and the UK and EU), rather than merely bilateral as is the case before Brexit.
Taken together, all these issues suggest that competition authorities on both sides of the pond may well increase their scrutiny of North Atlantic aviation and the joint ventures in 2019.