In a move that will tilt the world's aviation axis, Chinese airlines are making bold efforts to target sixth-freedom traffic from their geographically well-positioned hubs that further benefit from very low cost bases. There are challenges including service, distribution and marketing, but on the latter two, China's airlines are making efforts and not standing still.

China Southern, the most aggressive mainland carrier pursuing sixth-freedom traffic – high speed rail is estimated to impact its domestic network more than any other carrier – has signed a distribution with Expedia, its first agreement in the online travel agency space. The agreement will see China Southern's fares on Expedia websites in North America, Europe and Asia. Those are all sixth-freedom markets China Southern is targeting: earlier this year it launched nearly unprecedented USD1000 return fares between Australia and Europe. It is also increasingly targeting traffic from the US to Asia, and even US-Australia traffic in which journey distances through a Chinese hub are 50% longer but fares still lower than airlines flying between Australia and the US non-stop. The agreement will also place China Southern's fares on corporate site Egencia, Hotwire, and China's eLong.

Air China, which operates a smaller network than China Southern, is also engaged in pursuing sixth-freedom traffic. It operates a larger European network than China Southern, serving 13 cities in Jun-2012 to China Southern's eight, and its recent marketing campaign in Stockholm focused exclusively on sixth-freedom traffic. The campaign brief was telling: "How can we raise awareness that Air China flies not only to China but also all throughout Asia?"

The campaign partnered with Stockholm's Asian restaurants to promote that Air China flew to cities in countries those restaurants serve food from: Tokyo for a sushi restaurant, Bangkok for a Thai restaurant. Patrons would "check-in" on Facebook to the restaurant and stood a chance to win free tickets. The full marketing video is below.

Air China is also pursuing more conventional advertising, taking out ad space on Sydney's buses to promote its hub as offering "An easier and smoother connection to Europe and North America". 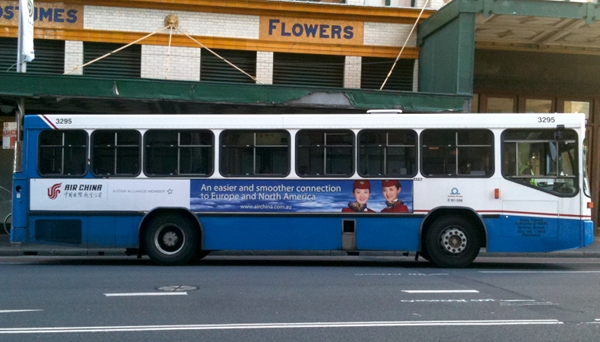 China Southern is also active in the Australia-Europe market in which it hopes to supplant the "Kangaroo Route" for the "Canton Route", named after the province containing Guangzhou, China Southern's largest hub. One of its advertisements in Melbourne had the tagline "Go Europe. Fly China Southern".

Chinese carriers have a fledging position in sixth-freedom traffic, but it is a matter of when, not if, more of the market will do as China Southern's ad beckons and fly Chinese carriers – and as Air China's ad says, to places beyond China.