During Oct-2009 domestic US airline yields continued to contract at double-digits levels, slumping 12.5%, the eighth consecutive month of decline.

While international yields showed signs of bottoming over the Northern Summer, in the Atlantic, Latin and Pacific markets yields remained significantly lower on a year-on-year basis last month, down by 14.4%, 17.3% and 17.8%, respectively, according to the Air Transport Association (ATA). All three regions saw an improvement from the previous month’s contractions. 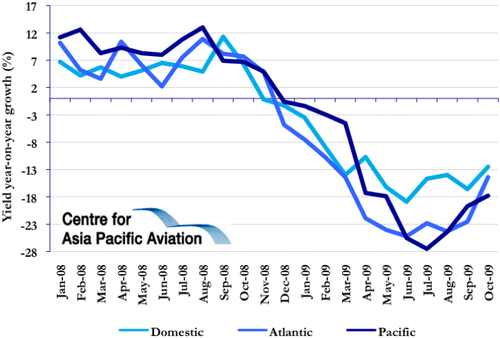 Last month's reductions come off reasonably solid yield gains in the corresponding period in 2008: domestic yields in Oct-2008 were up by 6.3% and Atlantic, Latin and Pacific yields gained 7.7%, 19.1% and 6.7%, respectively.

Yields were higher in 2008, partially due to fuel surcharge related increases, which have reduced as oil prices decreased. The 12-month moving averages also shows there is much work still to be done by the US airlines to arrest the declining yield trend. 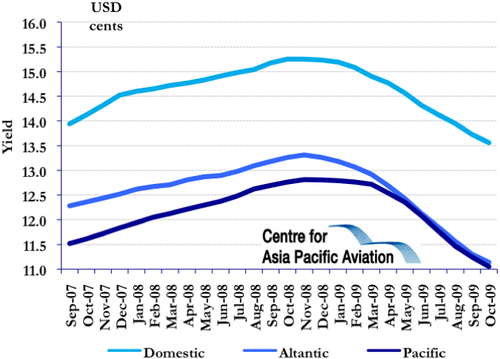 Yield reductions in Latin America and Pacific in Oct-2009 were also worse than the year-to-date average, although there was improvements in domestic and Atlantic operations. Actual yield levels in Oct-2009 were the highest for the year to date.

Looking forward, ATA carriers are likely headed for another month of high single-digit or double-digit yield reductions in Nov-2009, following yield growth for Atlantic, Latin and Pacific services in Nov-2008 (of 4.8%, 10.3% and 4.9% respectively).

The reductions may, however, be less severe in the domestic market, as was the case in Oct-2009, as they will come off a negative base from Nov-2008, first month of domestic yield contractions in the US.

As long as air travel demand, an in particular premium demand, remains weak, yields will continue to be under pressure.

The trend of lower demand and weak yields will continue for some time. On 09-Nov-2009 the ATA stated it expects a 4% year-on-year reduction in passenger numbers on US airlines during the 2009 Thanksgiving holiday season (20-Nov-2009 through 01-Dec-2009), despite the deep discounting activity.

According to ATA President and CEO, James C May, “it increasingly apparent that the economic head winds facing the airlines and their customers are anything but behind us”.  He added, “as typical with the Thanksgiving holiday travel period, flights are likely to be quite full, driven this year by the decrease in available seats and deep discounting, rather than by robust demand”.

Mr May, last month, also warned commenced that “while other sectors may be seeing signs that the economy is getting back on track, the airline industry has faced challenges in its effort to generate revenue”.

Separately, but illustrating the same point, the BTS stated that the average domestic airfares in 2Q2009 fell to their lowest level since 1998, dropping 13% year-on-year, for the largest year-to-year decline on record.

US airlines are, however, attempting to arrest the declines. According to ATA, 2009 capacity reductions by US airlines are now the deepest since those committed to during WW2 (specifically 1942). This drastic capacity management, combined with opportunistic capital raising exercises, has positioned the US airlines to survive the tough Winter that lies ahead. This capacity management has also meant that US airlines are operating at near record load factors, which is partially making up for reduced air fares.

However, according to ATA, while US airlines are now reporting improved load factors and are still reducing costs (ATA stated its quarterly Airline Cost Index fell 29% to 183.9 in 2Q2009, for the second consecutive quarter of airline cost declines), there still exists an “unfavourable gap” between average break-even and actual load factors, currently at 1.8 ppts (from 6.3 ppts in the previous corresponding period).