WTO panel report is in, Airbus and Boeing both claim victory

The 1,076 page WTO panel report on the US case against subsidies to EADS and Airbus is in, and the outcome is not wholly satisfactory to any party. While US trade representative and Boeing have again come out with claims of a sweeping victory, Airbus too has claimed the WTO panel has rejected the majority of US claims. The EU has been quick to point out that only when the final report on the EU case against US subsidies Boeing has been released will a full and more balanced picture of this dispute be drawn.

A tale of two interpretations: Airbus and Boeing on the WTO ruling

Setting the spin aside, the ruling is highly convoluted and a mixed bag for both sides, but it will mean changes in the way that Airbus is supported by European Governments, and potential adjustments to how Airbus does business. The European Commission expressed its disappointment with certain findings, in particular that part of the reimbursable launch investment (RLI) provided for the A380 aircraft constitutes an export subsidy and that certain infrastructure measures of general nature can be classified as actionable subsidies.

Europe is already looking at recommendations on this issue and is considering an appeal on certain elements. A 30-day period is allowed to lodge an appeal, followed by a 90-day review period, although this could balloon out to considerably longer, given the complexity and size of the case.

If the ruling is upheld on appeal and the EU refuses to stop the prohibited export subsidies the US could request the WTO for permission to impose sanctions on EU goods. Given that outstanding EU case against Boeing subsidies, and the fact that both Airbus and Boeing do massive business in each other’s home markets, this is a situation nobody wants. The EU has made it known that it believes a negotiated settlement on large commercial aircraft is the only way the dispute will end.

The confidential interim report in the EU's countersuit is expected in mid Jul-2010, although the final report may not be released until into 2011. Airbus is determined to push ahead with RLI financing for the A350. If Boeing and the US think they have a case, then round three of the funding dispute may be just around the corner.

The ruling does set an important precedent for the future of large commercial aircraft. According to Boeing, the ruling establishes an “overarching principle governing all those entering aerospace markets: Anyone that wants to use government funding arrangements to develop new, competing products must demonstrate that monies are provided on proven commercial terms”.

The reaction on stock exchanges was relatively muted, with both Boeing and EADS down 0.8% on 30-Jun-2010, after heavy falls the previous day. 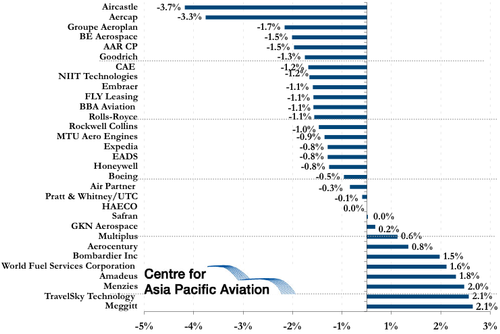