In the tenth part of our series on the drivers of the world's busiest airports, Denver International provides some unique features. For starters, the new Denver International Airport (DIA) is the only major green-field airport opened in the US in the past two decades. Equally unusual, when the new field was opened in 1995, one of its long-time airline tenants, Continental, stopped using the airport as a hub. And over time, the new airport has become a hub for a legacy carrier, United, as well as for two low cost carriers, Frontier and Southwest.

DIA is also a key indicator of the economic power of airports. When built in 1995, it was far from the city, and those returning rental cars complained that there were no gas stations near enough to allow renters the ability to return the car with a full tank. But within ten years, the airport had drawn so much development that it was getting noise complaints from new, nearby residents.

A symbol of its hometown

Like Dallas, it was built on a grand scale with ample room and plenty of runways — 6. Its signature terminal evokes the mountainous terrain which surrounds it and has become an icon of Denver, a city that has added nearly one million inhabitants in the past 20 years. 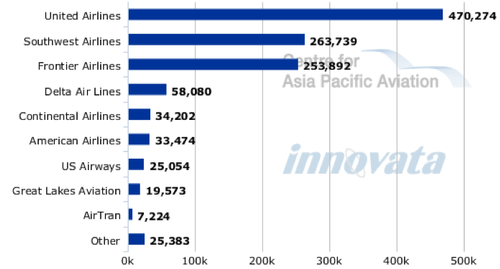 With the merger of United and Continental, two of the airport’s historic prime movers will combine to be the dominant carrier. But United does not rest easily in that position as first Frontier, and then Southwest, have both challenged the legacy carrier and mirror many of UA’s routes.

Southwest has been especially aggressive at DIA; beginning service in Jan-2006 with only 13 flights, it currently operates 144 and challenges both United and Frontier on each of the airport’s most heavily traveled routes. 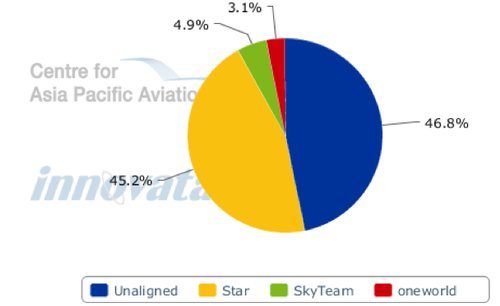 Star is the dominant alliance, but not the biggest shareholder

Because of this rather unique mix of competitors, Denver is the nation’s only major hub where unaligned airlines provide the majority of service. Though of the three alliances, Star is clearly the dominant force at the airport. 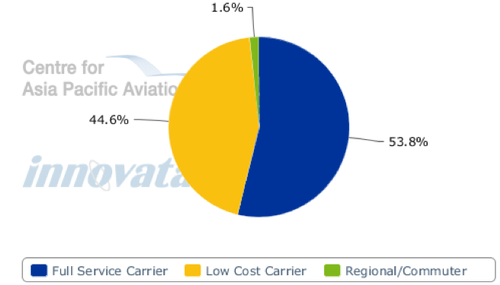 And, as previously noted, DIA stands alone in the percentage of LCC seats provided at a legacy hub. 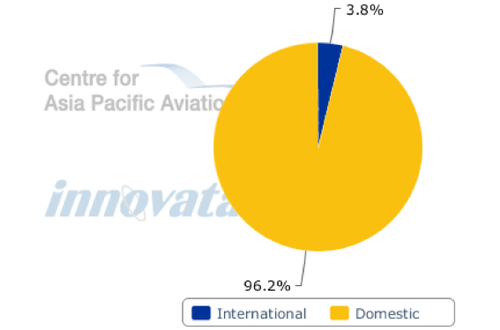 Because of its location as a primary connection point for traffic to/from the Intermountain states, as well as the fierce competition waged by the three main players, the airport is overwhelmingly focused on domestic traffic. Long-haul international service consists of one daily service each to London (BA) and Frankfurt (LH). 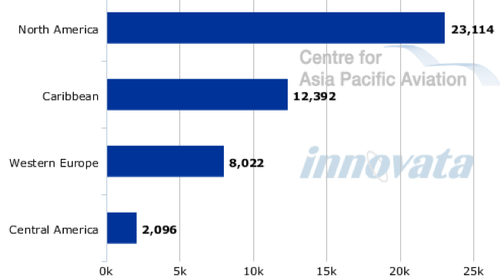 The bulk of the international service connects Denver with points in Canada and Mexico, with the warm Caribbean in second place.

The competitive environment created by a three-way battle for passengers can have significant benefits for travelers, and while there are spikes, the moving averages are much lower than the peak fares for the same dates.

Denver’s importance and traffic volume are primarily due to geography. Its location makes it an ideal traffic distribution point in all directions and the absence of any other major airport in the region ensures that many folks headed for Boise, Idaho or Cheyenne, Wyoming will likely pass through DIA enroute.

This is a region that shows steady growth, creating a positive long-term outlook for Denver.