The fast-growing Wizz Air Group, privately owned and not subject to the same financial and traffic reporting requirements as publicly listed companies, has remained a mystery when it comes to its cost structure and profitability. CAPA has obtained and analysed detailed financial and operating data and the results are presented in this article. The group’s cost base is certainly low – it has the second lowest unit costs among European carriers, with CASK more than one third lower than easyJet’s, and a track record of cutting ex fuel unit costs. This cost structure, built mainly on Europe's most productive and low-cost labour force, has helped Wizz Air to a strong market position in Central and Eastern Europe, where it was the leading LCC in the 12 months to Mar-2013.

Its last reported financial year (to Mar-2012) saw a healthy EBIT margin of 5.8%, after seeing net losses in six of the previous seven years, suggesting that the business may be maturing. Wizz's closest competitor, with overlap on around one quarter of its routes, is Ryanair, whose unit costs are 14% lower than Wizz Air’s. Ryanair is growing strongly in the region and this could threaten Wizz Air’s goal to become its largest carrier over the next decade unless it can continue to lower unit costs.

With an ambitious fleet expansion programme and a thinly capitalised balance sheet, Wizz Air will need to consolidate its hard-won profitability and may even be considering the IPO it first mulled in the mid 2000s. 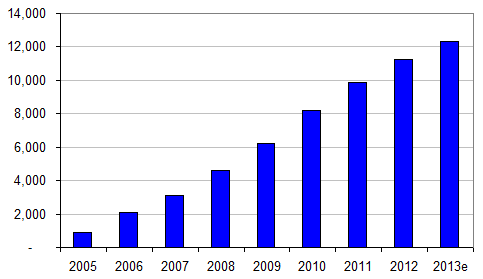 Data reported via the European Low Fare Airlines Association (ELFAA) reveal load factor trends for calendar years and demonstrate a gain of 5.7ppts between 2006 and 2012 to reach 85.7%, in spite of a dip in 2009. This compares with average load factors for AEA carriers at around 79%. 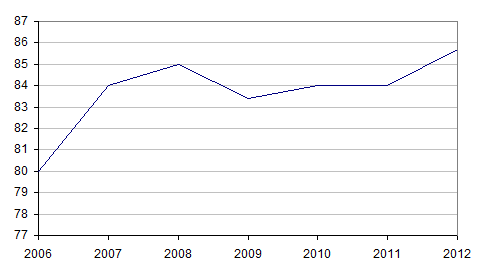 The Wizz Air Group has 16 bases in nine countries Central and Eastern Europe and it operates to 85 destinations in 28 countries, with a total of 270 routes. 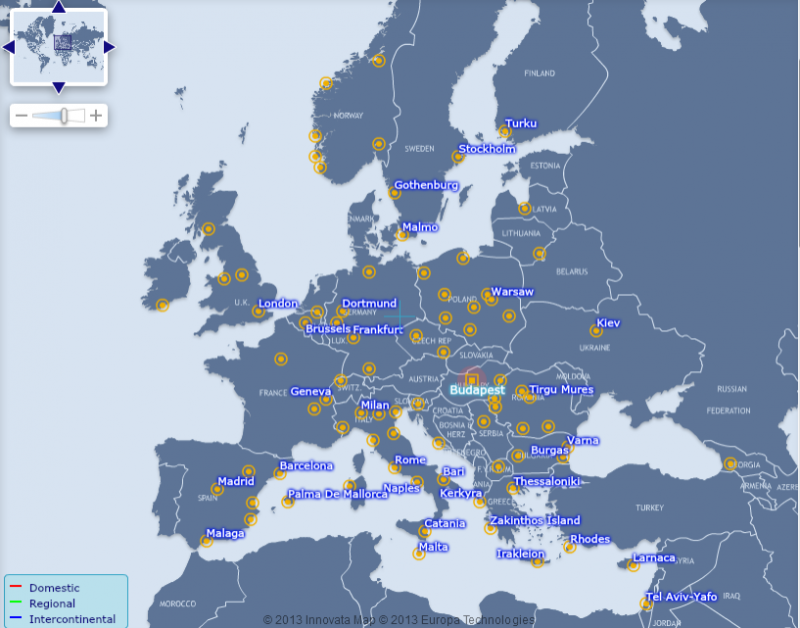 Wizz Air has strong positions in its key airports

Although not formally one of its bases, London Luton is Wizz Air’s biggest airport by seat numbers, followed by Budapest Ferenc Liszt, Bucharest Otopeni, Gdansk, Katowice, and Warsaw Chopin. The group has the number one position, by share of seats, in all but two of its 11 most important airports.

The number one LCC in Central/Eastern Europe, but slipping

Wizz Air was the number one LCC in Romania, Bulgaria, Serbia, Macedonia and Ukraine and number two in Poland, Hungary and Lithuania over the 12 months to Mar-12 (note that Ryanair's position in Hungary is now reduced after it cut 10 routes, or around 40% of its capacity at Budapest, in a row over charge increases).

According to the Innovata database for the week commencing 1-Apr-2013, Wizz Air is now number five overall, with 4.5% of seats, and Ryanair is now third with 6.3%.

Ryanair overlaps with one quarter of Wizz Air’s routes

According to OAG Capacity Statistics for Mar-2013, Ryanair overlaps directly or indirectly with Wizz Air on 67 routes, more than any other carrier. This is around one quarter of Wizz Air's routes, but less than 5% of Ryanair's approximately 1,500 routes.

Wizz Air is the number one operator on all of its 10 biggest routes by seat capacity, if the route is defined by the airport pair. On seven of the 10, there is only one other competitor (easyJet on Luton to Budapest, Blue Air on Luton to Bucharest Otopeni and Ryanair on Brussels Charleroi to Budapest). However, if the routes are defined by the city pairs and include other gateways to the same city at either end, then only one of Wizz Air’s top 10 routes (Katowice to Dortmund) is a monopoly.

Ryanair competes with Wizz Air on seven of these routes when multiple gateways are included. Of these seven, they each lead on three and there is one where they have an equal share of seat capacity. 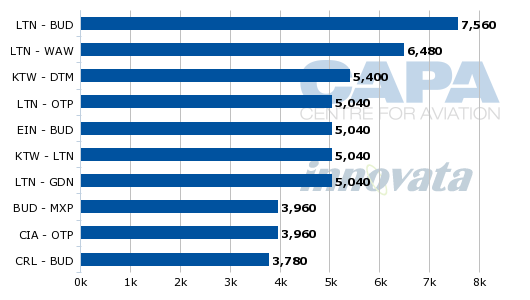 The Wizz Air Group has 45 Airbus A320 aircraft with an average age of 3.8 years (at Jun-2013, source: Wizz Air. Note: 40 A320s according to CAPA's Fleet Database). It plans to grow this number to 79 by the end of 2017, averaging around 15% p.a., in line with its goal of becoming the largest airline in Central and Eastern Europe over the next decade.

After making extensive use of off-balance sheet operating leases through its start-up phase, whether from the outset or through sale and lease back, the group is now looking to expand its financing choices through debt funding. 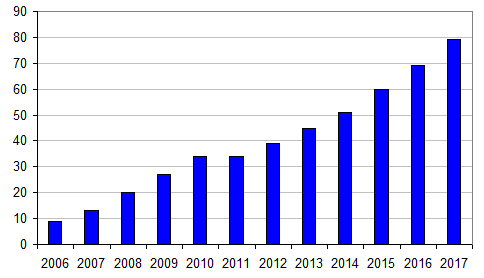 Wizz Air’s revenue growth has broadly tracked passenger growth over the period FY2005 to FY2013, based on its revenue estimate of EUR850 million for FY2013, generating compound average revenue growth of 40% p.a. In FY2012, revenues grew by 30%, much faster than the 14% increase in passenger numbers, and in FY2013, according to Wizz Air estimates, revenues growth of almost 11% continued to outpace passenger growth of just over 9%.

Ancillaries accounted for 27% of group revenues in FY2012, a higher percentage than the roughly 20% achieved by Ryanair and easyJet.

Best ever margin in FY2012, but profitability has been volatile and Wizzair's balance sheet looks undercapitalised

In spite of consistent revenue growth, profitability has been more volatile and the group achieved a positive net result only twice in the eight years from FY2005, reaching its best ever result in FY2012 when its EBIT margin was 5.8%. This put it third behind Ryanair and easyJet in the EBIT margin rankings for that year and, were it to repeat or better this performance for FY2013, this would establish Wizz Air more firmly among Europe's more profitable airlines.

Wizz Air’s year-end gross cash position at Mar-2012 was EUR123 million, equivalent to almost two months of revenues, a reasonable cushion against unexpected events (but less than those of easyJet or Ryanair). (At the end of 3QFY2013, Wizz Air’s cash pile was virtually the same as at the end of FY2012, in spite of growing revenues, suggesting slightly tighter management of cash.)

With just under EUR34 million of debt on the balance sheet, the group had a net cash position of almost EUR90 million at the end of FY2012. Capitalising operating leases at the rule of thumb rate of eight times annual rental, would add EUR670 million of off-balance sheet debt to give an adjusted net debt figure of EUR580 million. With total equity of EUR54 million at the end of FY2012, the balance sheet looks a little under-capitalised.

The company is considering financing future aircraft deliveries on balance sheet, suggesting that the IPO that it started to consider some years ago could perhaps come back into its thinking, or at least that it may seek fresh equity capital.

In EBIT terms, financing aircraft through debt (or outright for cash) rather than operating leases would improve margins (all other things being equal) and would also have a modest beneficial impact on cash operating costs. 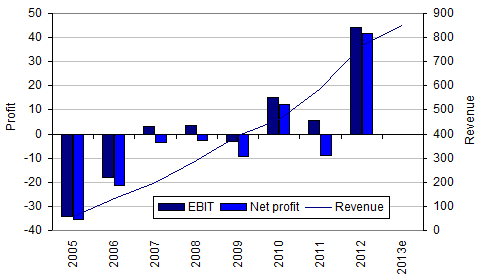 - Staff costs account for only 7% of its total operating costs, lower than for any other European airline (for Ryanair, the equivalent figure is 11%);

- Airport, handling and route charges account for 28% of costs (24% for Ryanair); and

- Aircraft ownership-related costs (operating leases, depreciation and maintenance) account for almost 20% of costs (vs 14% for Ryanair).

Wizz Air’s total cost per available seat kilometre was 3.74 cent in FY2012, the second lowest in Europe after Ryanair with 3.23 cent and significantly lower than other LCCs such as easyJet, Vueling and Norwegian Air Shuttle. Its key cost advantage compared with Ryanair seems to be in labour costs: it has the lowest labour cost per employee (just under EUR37,000), reflecting low wage rates in CEE. It also has the highest productivity, in terms of ATK per employee, of all the European airlines analysed by CAPA.

This leads to the lowest employee cost per ATK and Wizz Air Group also has the third highest revenue per employee in Europe. However, this labour cost advantage is more than offset by higher airport and route charges and aircraft costs, when compared with Ryanair.

Wizz Air has done a good job in lowering cost per available seat kilometre since FY2005. Rising fuel costs have pushed total CASK up in FY2011 and FY2012, but the group has consistently lowered ex fuel CASK through a rapid capacity growth strategy. Since FY2007, unit revenues (RASK) have broadly tracked unit costs and the increases in RASK since FY2012 suggest some pricing power has been achieved.

This partly reflects the relatively tight capacity control in Europe generally, but also Wizz Air’s own slowing of its capacity growth (which, nevertheless, remains much faster than that of the market). 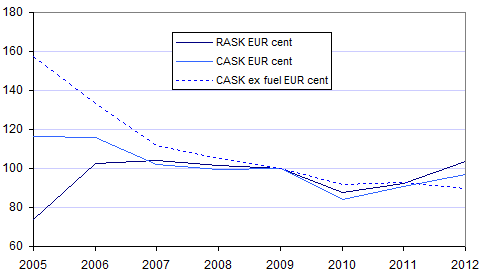 The chart below compares unit cost and average sector length for a number of European carriers, both legacy and LCC. It highlights Wizz Air’s position as the second lowest unit cost carrier in Europe, with only Ryanair having a lower CASK. Its longer average sector length than the other LCCs should give it a lower CASK and it comfortably achieves this against Norwegian, Vueling and easyJet.

Wizz Air has used its competitive cost base to build a strong market position in Central and Eastern Europe, but it will be concerned by increasing competition from lower cost Ryanair. Wizz Air’s position as the leading LCC in CEE is slipping.

In the principal CEE country markets where both Wizz Air and Ryanair have a significant presence (Poland, Hungary and Lithuania), Ryanair was the number one LCC in the 12 months to Mar-2013.

That said, Wizz Air has shown that it can be profitable in the face of competition from Europe's lowest cost producer and Ryanair's decision to cut capacity at Budapest from this January gave it some respite (even if it turns out to be temporary).

It should be fascinating to watch the battle intensify, especially if Wizz Air can lower its costs further while retaining its pricing power. 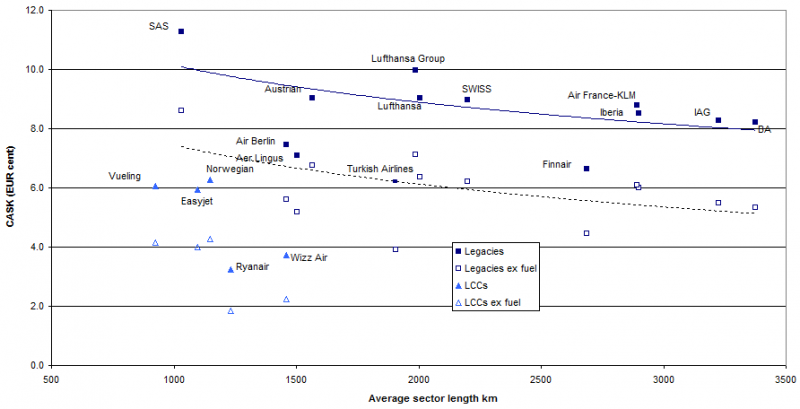