In late Oct-2015, ultra-LCC Wizz Air carried its 100 millionth passenger, just 12 years after its 2003 launch. In a further sign that it has joined the ranks of Europe's well established airlines, this year also saw its Feb-2015 floating of its shares on the London Stock Exchange. Wizz Air's 1H results for FY2016 confirmed the ongoing strength of its performance in its first full financial year after its share listing. Wizz Air's underlying net profit grew by 34% and its operating profit increased by 28%. Revenues grew by 15%, with passenger numbers up 20%, and the operating margin gained 2.6 ppts to reach 25.4%.

Wizz Air's success has been built organically and with a largely stable management team under founding CEO Josef Varadi. In this respect, the recent departure of long-serving CFO Mike Powell creates some uncertainty pending his replacement.

Nevertheless, as CAPA's analysis of Wizz Air's strengths, weaknesses, opportunities and threats highlights, the airline is strongly placed to drive further profit growth, provided that it can continue to live with competition from Ryanair.

Wizz Air's 1H performance was mainly built on a strong 2Q, which enjoyed revenue growth of 17%, with passenger growth of 20%, and operating profit growth of 34%. Wizz Air's 2Q operating margin was up 4.6ppts to 35.3%.

This margin was significantly stronger than the 18.5% achieved by the best of Europe's Big Three legacy airline groups, IAG, but less than the 40.7% achieved by Europe's most profitable airline Ryanair.

Based on its FY2015 results (year to Mar-2015), Wizz Air had the second lowest unit cost among European airlines, according to the CAPA CASK Database. Alongside Ryanair and Pegasus, this categorises Wizz Air as one of only three ultra-low cost airlines in Europe. This low level of cost per available seat kilometre is based on a highly efficient business model, which includes a focus on secondary airports, high average aircraft utilisation and high labour productivity. 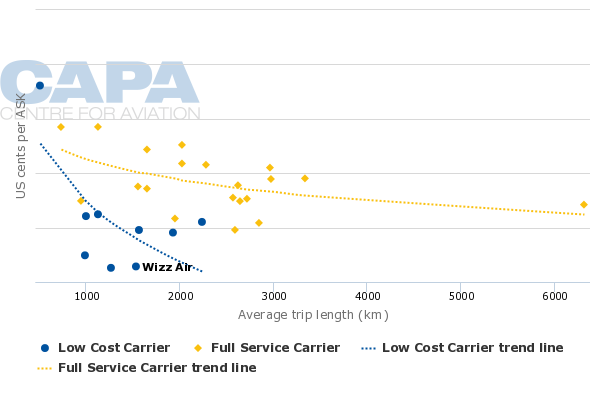 As a consequence of is low unit cost, Wizz Air is able to price its fares below almost all of its competitors, while remaining profitable, and thus to drive demand and market share. This allowed Wizz Air to grow passenger numbers at a compound average growth rate of 31% pa in the ten years to FY2015.

As noted above, only Pegasus and Ryanair are in the same bracket as Wizz Air with respect to unit cost. Pegasus operates almost entirely in different markets, although Ryanair has a significant overlap with Wizz Air (see Threats below). Wizz Air also generates a high level of ancillary revenue and uses this to keep its basic ticket prices low.

3. Wizz Air has the leading market share in its chosen market

In 2014, Wizz Air was Europe's fifth largest LCC by passenger numbers and its fourth largest by ASKs. In Oct-2015, the airline carried its 100 millionth passenger since operations began 12 years ago. Perhaps more importantly, it is the only one that combines operating across a wide range of European countries while also keeping a clear geographic focus. Most of Wizz Air's routes link its bases in Central and Eastern Europe with destinations in Western Europe and it has become the leader in this niche.

According to OAG data for the week of 19-Oct-2015, Wizz Air is the biggest airline by seats between Central/Eastern Europe and Western Europe, just ahead of Ryanair (see chart below). The next LCC after these two, easyJet, has only 36% of Wizz Air's capacity operating between the two halves of Europe. 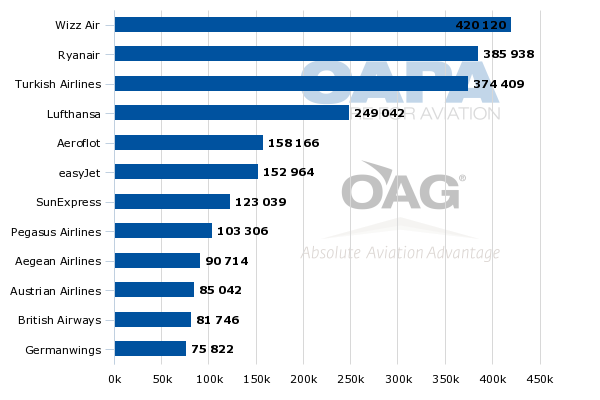 4. Wizz Air has the highest level of ancillary revenue in Europe

In FY2015, Wizz Air generated 35% of its revenue from ancillary activities. This was the highest such figure among European airlines and (according to research by IdeaWorksCompany) the second highest in the world. Wizz Air passengers each paid EUR26 for ancillaries, compared with EUR15 for Ryanair (whose ancillary revenue was 25% of the total). Ancillary revenues not only help to keep ticket prices low, thereby stimulating demand, but also tend to be high contributors to profits.

As a result of its low cost base and strong demand, Wizz Air has developed a good track record of profitability. FY2015 was its sixth successive year of positive operating profits and its 13.9% operating margin was second only to Ryanair. Its EBITDAR margin of 27.8% was just ahead of Ryanair's 27.1%, although in 1H of FY2016, Ryanair's EBITDAR margin of 38.3% edged ahead of Wizz Air's 36.6%.

Wizz Air achieved a 67% increase in underlying net profit in FY2015 to EUR146 million. Its FY2016 guidance range of EUR190 million to EUR200 million implies growth of 33% this year. Its developing history of profitability helped Wizz Air to raise fresh equity in Feb-2015 and this strengthened the company's balance sheet. At the end of Sep-2015, its cash balance of EUR617 million was equivalent to 168 days of revenue, a substantial liquidity cushion.

As for the industry in general, Wizz Air's earnings are highly seasonal, with its profits strongly relying on the summer half year, 1H (April to September). In Fy2015, 1H accounted for 105% of full year underlying net profit and Wizz Air's guidance suggests a similar ratio in FY2016 in particular its 2Q (July to September) to offset a loss-making winter (October to March).

2. Wizz Air operates with lower frequencies than its competitors

Wizz Air tends to offer lower frequencies on its routes than its competitors. This is particularly the case when compared with full service airlines, but also against other LCCs. Data from the European Low Fares Airlines Association indicate that Wizz Air operated 352 daily flights on 380 routes in the 12 months to Jun-2015, an average of 0.9 flights per route.

This compares with an average of 1.0 for Ryanair, 1.1 for Norwegian, 1.5 for Vueling and 1.8 for easyJet. This may not be a significant weakness on leisure routes, and has helped with route expansion, it is certainly a disadvantage in attracting higher yielding business passengers and some leisure passengers.

Wizz Air's target market of Central/Eastern Europe offers attractive growth potential for a number of reasons. First, the region is economically less developed than Western Europe and therefore its GDP growth rate tends to be higher.

Second, economic growth and transport links with Western Europe are increasing as a result of the expansion of the European Union to include several Central/Eastern European countries in recent years. Third (and related to the first point), it has a lower propensity for air travel than Western Europe, but this should increase as the economic wealth of the region grows.

As the propensity for air travel grows, the value proposition of LCCs is likely to drive an increase in their market share, particularly given the lack of powerful large full service airlines in the parts of Central/Eastern Europe in which Wizz Air is most active. 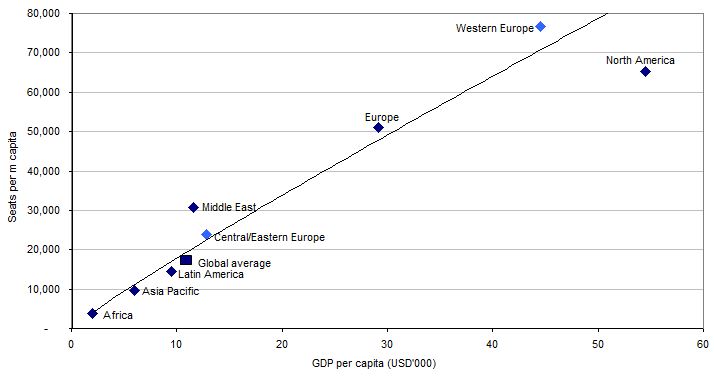 Wizz Air has recently placed an order with Airbus for the purchase of 110 Airbus A321neo aircraft, with deliveries to start in 2019, and uncommitted purchase rights over an additional 90 A321neo aircraft. The order received approval from Wizz Air shareholders on 3-Nov-2015.

The new A321neo aircraft will have a 239 seat configuration, compared to 180 seats in its existing A320 fleet and 230 seats in the A321ceo aircraft already ordered. The combination of lower fuel burn from the more efficient new engines and the greater seat capacity should lead to significantly lower operating costs per seat.

This should enable Wizz Air to continue to grow its traffic and to achieve unit cost savings relative to its current fleet before the neo deliveries start.

As noted under 'strengths', Wizz Air already has a very high level of ancillary revenue. Nevertheless, it has the potential to increase this further through initiatives surrounding its Wizz Dicount Club loyalty scheme and the introduction in May-2015 of fully allocated seating.

As with many other European airlines operating within the European Union, Wizz Air has benefited from access to the liberalised EU market. However, its Central/Eastern Europe focus touches countries that are not members of the EU and brings it geographically closer to non-EU countries where it currently has no presence.

As a result, it is positioned to benefit from any liberalisation in traffic rights between the EU and other neighbouring countries.

1. External events may be of concern

Air travel, regardless of the carrier, is vulnerable to geopolitical events and natural phenomena such as earthquakes and volcanic ash disruption.

Wizz Air's focussed geographic exposure arguably mitigates this exposure relative to airlines with a more global network, although its Central/Eastern European focus gives it operations in countries that border areas of geopolitical risk.

2. Ryanair is a fierce competitor

Although Wizz Air is number one by seats overall in its target region, Ryanair often comes out ahead in countries where they both compete. In FY2015, Ryanair had a lower unit cost and it is significantly larger than Wizz Air across all of Europe. Wizz Air's A321s (ceo and neo) should help it to lower its unit cost further, but Ryanair's 737MAX order will also be beneficial to its unit cost.

See related report: Wizz Air and Ryanair are well matched in the competition for Eastern and Central Europe markets

3. Yield dilution could result from Wizz Air's A321 deliveries

In addition to its beneficial impact on Wizz Air's unit cost, the A321neo is also likely to have at least some negative impact on yield as it has more seats to fill compared with the existing fleet. Moreover, the deliveries will come when significant numbers of narrow bodies are due to enter European airline fleets.

Wizz Air is confident that, if deployed on routes with the appropriate demand characteristics, yield dilution will be less than the unit cost reduction.

Building on its very low cost base and strong ancillary revenues, Wizz Air is able to offer low fares and stimulate demand growth. Its focus on Central/Eastern Europe, which is under-penetrated by air travel compared with Western Europe, offers strong growth potential. It faces strong competition from Ryanair, Europe's biggest airline and the only airline in Europe with lower unit cost than Wizz Air.

Nevertheless, Wizz Air is the leading airline in its chosen geographic market and, moreover, its has built this position profitably while always competing with Ryanair. It will need to find a suitably qualified new CFO to continue the focus on low costs and profitable growth, but its senior management has enough experience to recognise this.

Its fleet plan should help to keep unit costs on a downward path, but yield dilution is a risk that should not be ignored.

The future currently looks positive for Wizz Air, but it cannot afford to relax.