After years of double digit growth, Wizz Air's seat count dropped by 43% in the first 10 months of 2020. This compares with a 55% capacity drop for all of Europe.

Wizz Air returned capacity more aggressively than the market when it emerged from its grounding in the Jul-Sep quarter. However, the ultra LCC has applied the brakes following renewed lockdown and travel restrictions, and capacity is now below the European average as a percentage of 2019 levels.

In spite of reduced near term capacity plans, Wizz Air expects there to be opportunities in the crisis. Its fleet will increase by 13% in FY2021 and more than double by FY2027. Its seat share has grown in its Central/Eastern Europe core market and it is opening 13 new bases across Europe, from the UK to Russia. Further new markets will be added by Wizz Air Dubai, which now expects to launch in Dec-2020.

Moreover, Wizz Air can afford to wait out any extension of the period of weak demand. CEO József Váradi has said that its cash balance is enough to last for two years, even with a full lockdown and no flying.

For a number of years Wizz Air has been one of Europe's fastest growing airline groups, pursuing double digit growth in seat numbers in every year from 2014 to 2019.

The second calendar quarter of 2020 was one of near-total fleet grounding for Wizz Air: its seat numbers were down by 88.5% in 2Q2020, similar to the cut in all European airline capacity in that quarter.

However, Wizz Air returned capacity much more aggressively than the rest of the market in calendar 3Q2020, when its seat count was down by 28.4% versus a 60.5% decline across the European market.

At that stage, the only top 10 airline group in Europe with a higher percentage of 2019 capacity was S7 Airlines Group, with 88%, buoyed by the strong domestic market in Russia.

As a percentage of 2019 capacity, Wizz Air is now below the European market

According to data from CAPA/OAG on airline schedules and seat configurations, Wizz Air Group has 27% of its 2019 seat capacity in the week of 9-Nov-2020. This is now slightly below the European market average of 30%.

Among the top 10 airline groups in Europe ranked by seats for this week, only Lufthansa Group and IAG have a lower percentage of 2019 capacity in service.

The group's pre-exceptional operating result was a loss of EUR147.4 million, versus a profit of EUR412.4 million last year.

Comparing this most recent quarterly operating margin with those reported by Europe's big five airline groups places Wizz Air in second place. Ryanair achieved a positive operating margin of 1.0%, but the other four had margins in the range of -50.0% to -104.9%.

Although Wizz Air's achievement in containing its loss to a relatively low figure by comparison with its revenue is creditable, the most important financial measure to ensure survival in a crisis is cash.

Since Mar-2020 Wizz Air has consumed cash in its operations and in capital expenditure (although capex has been reduced). However, it has raised cash through the sale of fixed assets, through refunds on advances for aircraft and, mostly, on new loan funds raised.

The group has said that in the event of a full grounding its operational cash burn would be approximately EUR70 million per month until the end of FY2021.

This means that its cash balance should last a very considerable length of time, even after also taking account of capital expenditure and servicing of debt (Mr Váradi has estimated two years).

Wizz Air's capacity plans are reduced, but it expects opportunities in the crisis

Wizz Air has scaled back its capacity plans in the light of renewed travel restrictions and lockdown-like rules in a number of European countries. It is focusing only on flying that makes a positive cash contribution.

If current restrictions continue through the winter, it expects only "minimal" operations, as it will concentrate on protecting its liquidity.

Nevertheless, the group continues to regard the crisis as an opportunity.

In the Jul-Sep quarter of 2020 the airline had a seat share of 23% in its Central/Eastern Europe core market (according to a graph in its quarterly results presentation of 5-Nov-2020). 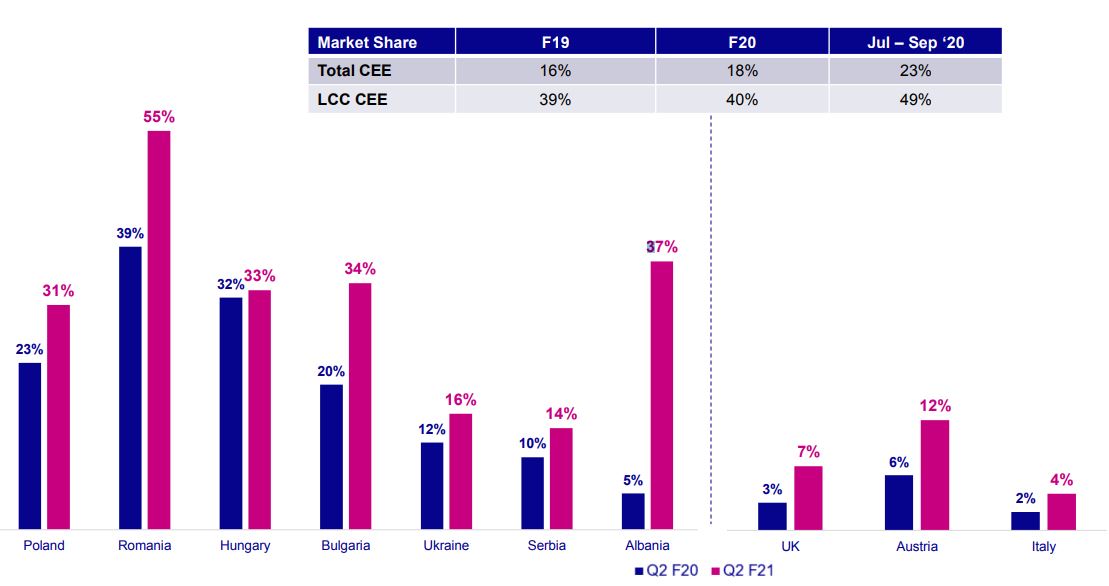 ..and it is opening new bases across Europe

Wizz Air has announced 13 new bases, where it will allocate 29 aircraft.

These bases span the width of Europe from west to east, with countries including the UK, Russia, Italy, Germany and Norway. Notably, it is entering domestic markets in Italy and Norway for the first time.

This target has increased from 131 planned in early Jun-2020 and represents a 13% increase in Mar-2020, in spite of the negative impact of the COVID-19 pandemic on demand.

The fleet will more than double by FY2027

This still represents a double digit annual growth rate (12% pa) in the number of aircraft between FY2020 and FY2027, and a more than doubling of the fleet from its Nov-2020 size.

The growth in average aircraft size is a key part of Wizz Air's strategy to lower unit costs. 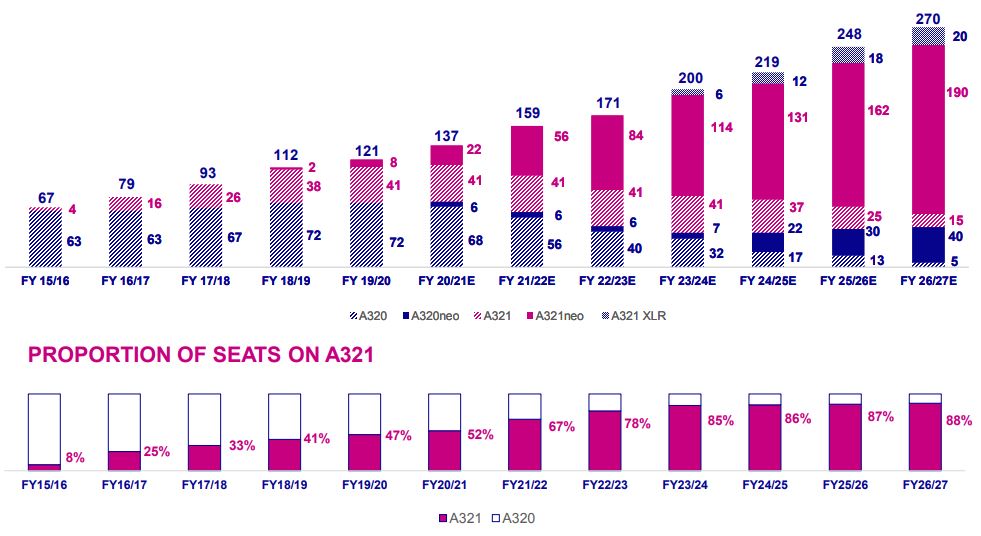 However, a 14-day quarantine requirement on arrivals into Abu Dhabi has delayed the planned launch of operations from mid Nov-2020 to mid Dec-2020.

Wizz Air Abu Dhabi MD Kees Van Schaick has said its that its "initial network is balanced between GCC countries, Northern Africa and our traditional markets in Europe".

According to the CAPA Fleet Database, Wizz Air Abu Dhabi has two new Airbus A321neo ACF aircraft, both owned by the company.

Mr Van Schaick has said that there is potential for a fleet of 50 or more aircraft within the first five years of operations: "If you look at the growth of Wizz Air since its inception, we believe there is the potential to emulate that here given the underpenetrated ULCC market".

In May-2020 Mr Váradi told a CAPA Masterclass that Wizz Air would recover from the coronavirus crisis in around one year, compared with two to three years for the airline industry as a whole.

Since then, Wizz Air's capacity recovery at first surged ahead, but has eased back more recently. This demonstrates the airline's ability to flex its operations according to demand, but raises at least some doubts that a full recovery is possible inside a one-year time frame.

Nevertheless, Mr Váradi appears to be sticking to his view that Wizz Air will recover in one year (although perhaps that year has been reset to start now, rather than back in May-2020). However, his prediction for aviation industry recovery has lengthened from two to three years to five to 10 years, according to media reports.