By operating margin, Wizz Air has consistently been Europe's second most profitable airline company over the past four years. Its unit cost defines it as an ultra-LCC, alongside Ryanair, which is its biggest rival in its focus market of Central/Eastern Europe and is also Europe's highest margin airline.

As part of its strategy to lower its unit cost further, necessary to remain competitive in its tussle with Ryanair, Wizz Air is transforming its fleet from A320ceo domination to one that is dominated by A321neos. Unit costs should benefit both from the higher seat count per aircraft and from the improved fuel efficiency of the new generation aircraft.

However, this strategy also locks Wizz Air into continued rapid capacity growth; this will likely weigh on unit revenue and, possibly, its profit margin. Wizz Air achieved record profits in FY2018 (year to Mar-2018), but its operating margin has now suffered two years of modest decline. It expects further profit growth in FY2019, but this may again not match its capacity and revenue growth.

This was its highest annual passenger growth rate since achieving a 32.3% increase in FY2010, although growth has been consistently double digit (excluding FY2013's 9.3%). Its 10-year CAGR in passenger numbers has been 20.5% pa.

Load factor was its highest ever (but below Ryanair's and easyJet's) 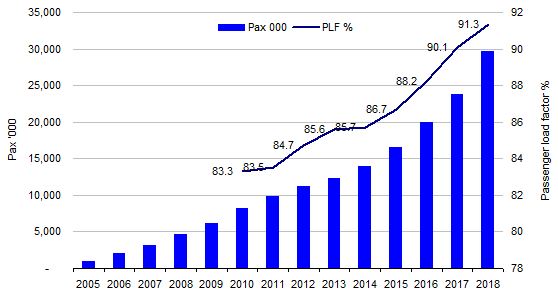 Wizz Air's revenue and profits were its highest ever

Net profit increased by 11.8%, to EUR275 million, and the increase was 22.1% on an underlying basis if exceptional gains (mainly related to fuel hedges) are excluded from the previous year's result. Its underlying net profit margin (profit as a percentage of revenue) eased back by 0.2ppts, to 14.1%.

Revenue grew by 24.0%, just ahead of capacity growth but slightly less than passenger growth. Operating profit increased by 18.4%, to EUR291.9 million, and the operating margin was shaved by 0.7ppts to 15.0%. 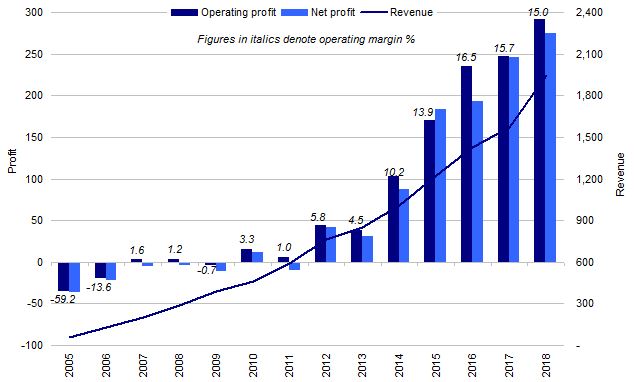 But margins are sliding slowly

The modest dip in Wizz Air's operating margin was its second successive year of margin decline from a peak of 16.5% in FY2016 (and net margin was also lower for two years running from its 15.7% peak in FY2016).

However, operating margins in both FY2017 and FY2018 were still above levels achieved in any year prior to that peak.

Moreover, its FY2018 operating margin of 15.0% places it second only to Ryanair's 23.3% among listed European airlines for 2017 (or nearest financial year).

See related report: Ryanair: four years of getting better, but beware of turbulence

Nevertheless, this margin squeeze, highlighted by CAPA in its analysis of Wizz Air's FY2017 results, is an unwelcome trend.

When margins are falling, this puts more pressure on achieving revenue growth to maintain profit growth. This, in turn, puts the focus on strong capacity growth, but that risks downward pressure on unit revenue.

Wizz Air's ex fuel CASK puts it firmly in the ultra-LCC category, but there has been almost no change in ex fuel CASK since FY2010. The improvement in Wizz Air's operating margin from FY2013 to FY2016 was mainly due to falling fuel CASK.

The margin decline in FY2017 was due to falling RASK and, although this was stabilised in FY2018, the increase in fuel CASK looks set to continue. 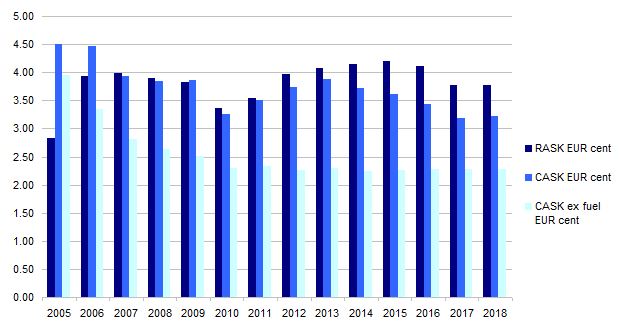 It also expects a 3% increase in RASK, which implies a stable operating margin, but a RASK increase is far from guaranteed, particularly with 20% ASK growth, and there may be more downward pressure on Wizz Air's margin.

Wizz Air's net profit guidance of EUR310 million to EUR340 million corresponds to growth of 13% to 24%, or 18% at the midpoint. ASK growth is planned at 20% and RASK is expected to be up by 3%, implying revenue growth of approximately 23%. This suggests that it expects net profit to grow more slowly than revenue, i.e. that its net margin will fall (except at the top end of the guidance range, which would imply a stable margin).

Over the longer term, Wizz Air's unit cost strategy is based on operating larger aircraft with more seats and new generation aircraft with better fuel efficiency.

As recently as FY2015, Wizz Air's fleet consisted only of A320s (there were 55 of them at the end of Mar-2015), with 180 seats, but the airline made a strategic decision to operate larger aircraft with more seats in order to lower its unit cost. It started to take deliveries of A321s, with 230 seats, in FY2016.

Wizz Air's aircraft have an average age of just 4.7 years as at 25-May-2018 – one of the youngest average ages among major airlines in Europe. Its average fleet age has consistently been below five years for more than a decade. 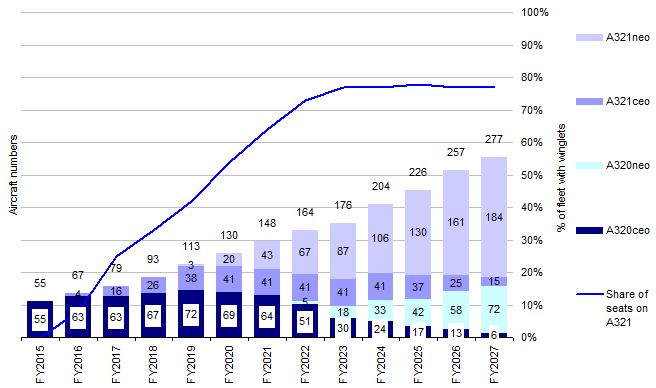 Wizz Air's fleet plan is aimed at lowering its unit cost. That will be important in the airline's battle with Ryanair, which is its main competitor in Central/Eastern Europe and also has an ultra-LCC cost base.

However, it also locks it into rapid capacity growth for several more years.

Fleet numbers will grow at a double digit pace for each of the next four financial years and in seven of the next nine. The compound average growth rate in aircraft numbers will be 13% pa from FY2018 to FY2027, and seat growth will be higher (around 15% pa) as the proportion of A321s will increase.

This continued strong capacity growth seems likely to place downward pressure on unit revenue. Wizz Air's gamble, however calculated, is that its fleet strategy will lower unit cost more rapidly than any fall in unit revenue in the coming years.

If not, margins will continue to slide.