Wizz Air's 2016 growth was the fastest among all of Europe's top 20 airline groups. Its passenger numbers increased by 19% to almost 23 million in calendar 2016, giving it an average growth rate of 22% pa over the past decade.

Although it is only Europe's 13th largest airline group overall and the number four LCC, Wizz Air is the biggest airline on routes between Eastern/Central Europe and Western Europe. Almost all of its routes are in this core market, and Wizz Air has managed to hold on to its number one spot in the face of strong competition from Ryanair, which is also growing rapidly in this market.

Wizz Air's fleet plan to 2024 is aimed at maintaining double digit growth rates, while also lowering unit costs by adding A321s and A321neos to its A320 equipment. Ten years ago Wizz Air carried only three million passengers, but it will almost certainly break into Europe's top 20 in 2017.

Wizz Air's passenger load factor gained 1.2ppts to reach 89.1% in calendar 2016 – its highest ever level and around 9ppts higher than 10 years earlier. This confirmed its breakout from the mid 80% range that it had occupied for some years until 2014. Nevertheless, it was still below the 90% plus load factors achieved by Europe's two largest – LCCs Ryanair and easyJet. 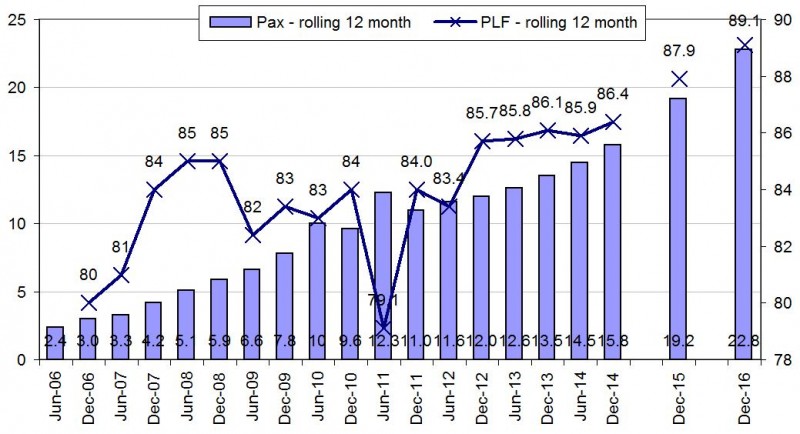 With number 10 ranked Air Berlin Group suffering a fall in passenger numbers and undergoing a restructuring that will halve the size of its core airline, Wizz Air has a good chance of entering the top 10 in 2017.

Data reported to the European Low Fares Airlines Association for 2006 indicate that the number of destinations increased more than fourfold, the number of countries more than doubled, and the number of routes grew almost 11 times compared with 10 years earlier.

Wizz Air's regional focus is Eastern/Central Europe, where all of its routes either begin or end. 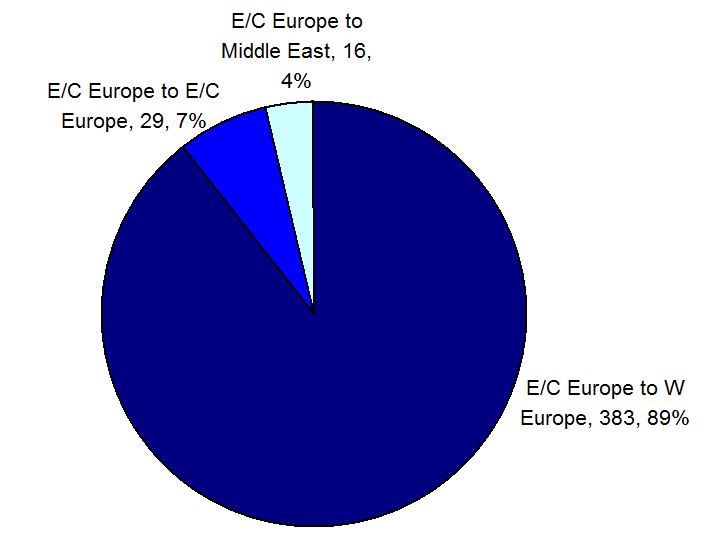 Wizz Air is the leading airline between E/C Europe and W Europe, just ahead of Ryanair

On routes between Eastern/Central Europe and Western Europe Wizz Air is the leading airline by seat capacity. It has 15.4% of seats in this route corridor, compared with Ryanair's 14.9% (source: OAG, week of 16-Jan-2016).

Both ultra LCCs have grown rapidly on these routes in recent years, each increasing their weekly seat capacity by three quarters since mid Jan-2014, when Wizz Air's seat share on routes between Eastern/Central Europe and Western Europe was 10.6% and Ryanair's was 10.2%. 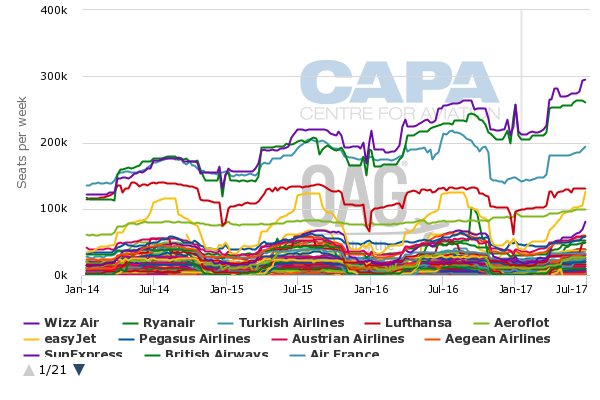 The size of Wizz Air's fleet increased from nine aircraft at the end of 2006 to 74 at the end of 2016 – an increase of more than eight times. The fleet has almost doubled the number of aircraft since Dec-2012, when it comprised 39 aircraft.

Ten years ago the fleet was all A320s, whereas it now includes 11 A321s among the total of 74. Wizz Air took delivery of its first four of the larger type in FY2016. 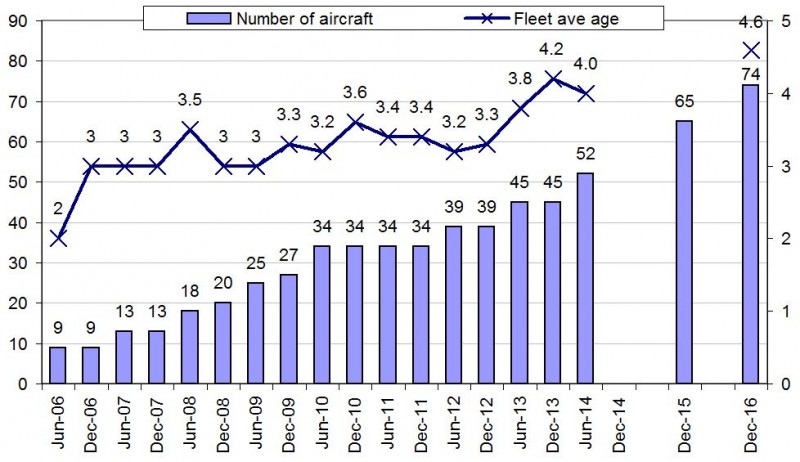 Wizz Air's average fleet age has crept up, but it still less than 5 years

The average age of Wizz Air's fleet is currently 4.6 years (source: CAPA Fleet Database, 16-Jan-2016). This has crept up slightly from an average of 3.0 years at the end of 2006, but compares favourably with most of Europe's leading independent LCCs.

According to the CAPA Fleet Database, Ryanair has an average fleet age of 7.1 years, easyJet 6.8 years and Pegasus 5.2 years. Only Norwegian has a younger fleet than Wizz Air's, with an average of 3.8 years for the Norwegian Group (3.9 years for its narrowbodies). 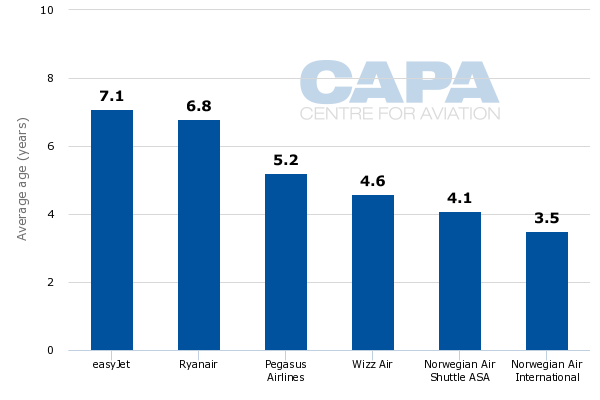 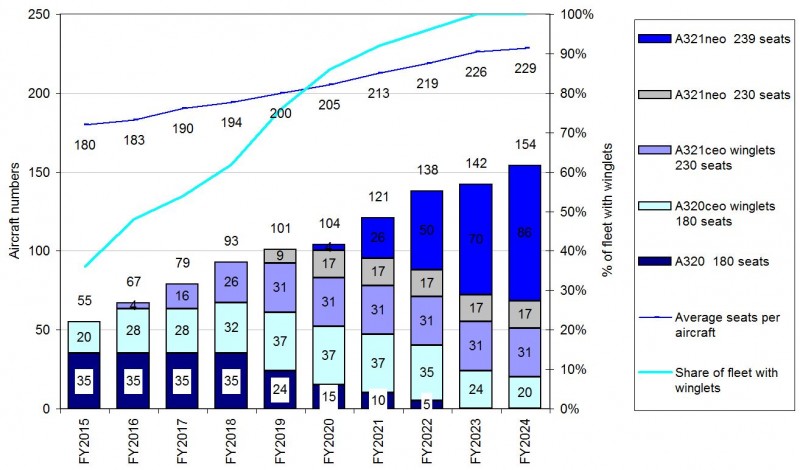 Wizz Air's fleet plan – with an increase in average aircraft size, the inclusion of newer generation engine technology and the use of winglets – is aimed at lowering its unit costs as it strives to remain cost competitive against its leading competitor Ryanair.

The two ultra LCCs are Europe's two lowest cost airlines and the continent's most profitable airlines by operating margin.

In summer 2016 Wizz Air faced Ryanair competition on 14% of its city pairs, covering 30% of its seats. Moreover, Ryanair is expanding rapidly in Wizz Air's core region and has opened five new bases this winter, increasing this overlap to broadly one third of Wizz Air's capacity.

See related report: Wizz Air: city pair overlap with Ryanair on one third of seats. Opportunities for both; CASK crucial

2017 set to be another year of double digit passenger growth

Following Wizz Air's 19% increase in passenger numbers in 2016, its growth looks set to continue at a double digit rate in 2017. CAPA analysis of OAG data for winter 2016/2017 indicates planned seat growth by Wizz Air of almost 19% – a rate that is second only to Flybe among the top European airline groups.

By the time of its 1H2017 results presentation in Nov-2016 Wizz Air was planning a fleet of 83 aircraft in summer 2017, an increase of 10 from summer 2016. These aircraft would be operating out of 26 bases in 14 countries, with Chisinau in Moldova and Kutaisi in Georgia adding to Wizz Air's 24 bases in 12 countries in summer 2016.

The chart below shows the summer 2017 aircraft numbers by base country that Wizz Air planned in Nov-2017.

Since then Wizz Air has announced (14-Dec-2016) a 27th base at Varna in Bulgaria, to open in summer 2017 with five new routes. This will increase the number of Wizz Air aircraft based in Bulgaria to eight, including seven in Sofia and one in Varna. It also plans an additional aircraft at Cluj, taking the total at the Romanian city to six, and a second at Kiev, taking the total at Ukraine's capital to two (reducing the number of aircraft in the chart below that were yet to be allocated from three to zero).

Wizz Air: number of aircraft based in each country, summer 2017 vs summer 2016 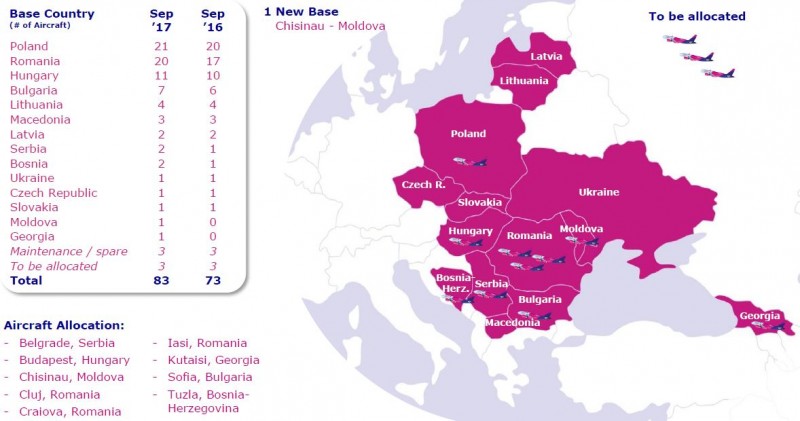 Wizz Air's 1H2017 results presentation in Nov-2016 listed 70 new routes that had been announced in the first half of its FY2017, mainly for launch in summer 2017, with some launched in the current winter schedule. These routes are listed in the chart below.

In Central/Eastern Europe, the most frequent countries of origin for these new routes are Poland and Romania, with 17 each, followed by Bosnia-Herzegovina and Hungary, with eight each, Serbia with seven and Bulgaria with five.

By country of destination in Western Europe: Germany leads with seven, followed by Spain and Italy with six each, the UK with four, and France and Portugal with three each.

Since then Wizz Air has announced 19 additional new routes that will be in operation in summer 2017, bringing the total number of new routes announced to 89. This is an increase of 17% from the 519 routes operated by Wizz Air during 2016 – a growth rate that is consistent with the seat growth data available from OAG and noted above.

The additional new routes announced after the 1H2017 results presentation include five routes from the new base at Varna from Jul-2017, to Dortmund, Eindhoven, Larnaca, Milan Bergamo and Memmingen.

The additional new routes also include five from Budapest for this summer, to Pristina, Podgorica, Sarajevo, Skopje and Tirana, none of which have been operated since the collapse of Malev in 2012. 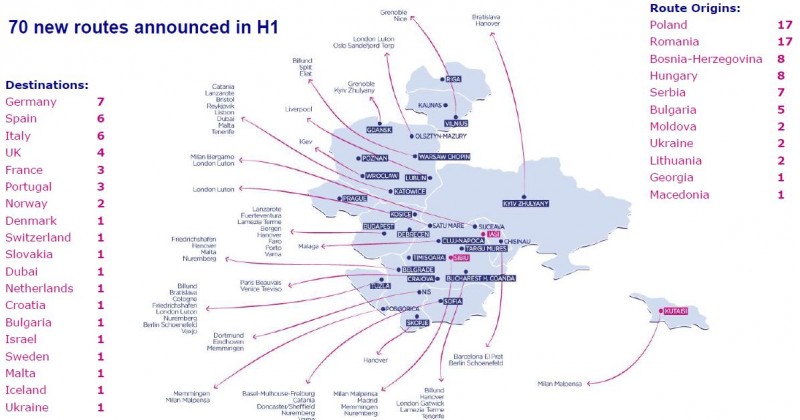 Wizz should be better positioned than most for any downturn

Wizz Air's passenger growth has been impressive, particularly since its 2014 IPO. Moreover, it has maintained a high growth rate while also improving its profit and margins. Its FY2017 net profit guidance of EUR245 million to EUR255 million implies growth of 12% at the midpoint. In the first nine months of calendar 2016 its operating margin of 20.9% was second only to Ryanair's 26.9%, among European airlines.

Meanwhile, the European airline profit cycle is showing signs of having reached a peak, with the beginning of a downswing possibly coming into view.

However, Wizz Air's high margins and strong cost focus, together with its clearly defined regional specialisation, should position it to weather any downturn better than most.