Wizz Air: city pair overlap with Ryanair on one third of seats. Opportunities for both; CASK crucial

Wizz Air and Ryanair are Europe's two lowest cost airlines, and most profitable airlines by operating margin. Together with Pegasus they form a small group of European ultra-LCCs. Unlike Pegasus, whose business concentrates on Turkey-Europe and domestic Turkey, both Wizz Air and Ryanair have bases in several countries.

However, while Ryanair is Europe's largest airline by seats, with a pan-European network and 84 bases, Wizz Air focuses on the niche between Central/Eastern Europe and Western Europe. All of Wizz Air's 25 bases are in Central/Eastern Europe, where it is the largest airline and Ryanair is number two. This superiority in CEE is based on Wizz Air's greater share of capacity in most of the larger country markets in the region (but not Poland), while in fact Ryanair is bigger in more (mainly smaller) countries.

In Jul-2016 Wizz Air faces Ryanair competition on 14% of its city pairs, covering 30% of its seats. Moreover, Ryanair is expanding rapidly in CEE, with five new bases this winter, increasing this overlap to around one third of Wizz Air's capacity. For Ryanair, the overlap represents a higher proportion of its CEE capacity, but only a very small share of its total seat numbers. 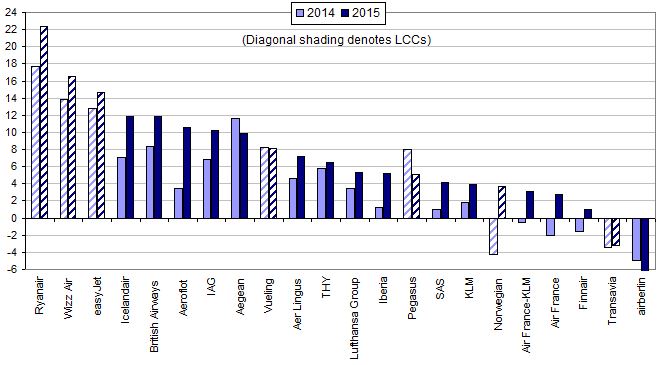 Ryanair and Wizz Air have consistently had the two lowest levels of cost per available seat kilometre (CASK) in Europe. In the year to Mar-2015 Ryanair's CASK was lower than Wizz Air's, but the two may have swapped positions in the year to Mar-2016. Ryanair only reports its ASKs once a year in its annual report (usually published in the autumn after the March year end), and it did not include such data in its FY2016 results announcement. It is therefore not yet possible to calculate its precise CASK for the same period.

However, based on a number of assumptions it can be estimated that Wizz Air's FY2016 CASK was 3% lower than Ryanair's (although its ex fuel CASK of EUR2.27 was 8% higher).

The significance of this comparison is limited by differences in average trip lengths. Wizz Air's average trip length is more than 20% longer, which (all other things being equal) should probably mean that CASK is even lower. However, the figures underline Wizz Air's credentials as one of Europe's true ultra-LCCs. 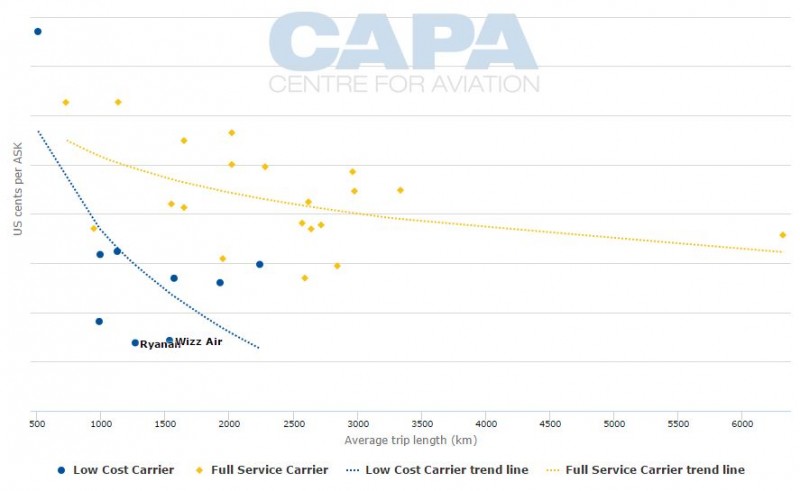 The OAG/CAPA capacity databases define Eastern/Central Europe on a purely geographical basis, with the region including countries such as Greece, Turkey and Cyprus. Wizz Air's definition of its focus region, which it calls Central/Eastern Europe, is more aligned to the European countries of what used to be called the Soviet bloc.

In fact, although Wizz Air operates to Russia – the largest market in the region – the country is not a focus market, and there is only one route operated there (a daily Budapest-Moscow Vnukovo service).

For the purposes of this report, analysis of Wizz Air's focus market (and its position versus Ryanair) is based on the geographical definition of Eastern/Central Europe excluding Russia, Turkey, Greece and Cyprus. This report refers to this Wizz Air focus market as Central/Eastern Europe (CEE).

Wizz Air is the number one airline in CEE and Ryanair is, narrowly,  number two.

Nine CEE countries served by both Wizz Air and Ryanair

There are nine countries in CEE that are served by both Wizz Air and Ryanair. Wizz Air is bigger than Ryanair by seat numbers in six of the countries where both are present (Poland, Lithuania, Latvia, Czech Republic, Slovakia and Croatia), while Wizz Air is bigger in three (Romania, Hungary, Bulgaria).

Ranked by its seat capacity, Wizz Air's largest presence is in four countries: Poland, Romania, Hungary and Bulgaria. Together they account for 78% of its total seat numbers (week of 11-Jul-2016, source: OAG). Although Ryanair is bigger than Wizz Air in Poland, which is the number one country by seats in CEE for both airlines, Wizz Air leads its Irish rival in the other three of its big markets, giving it overall leadership in the region. Moreover, Wizz Air is present in eight CEE countries that are not served by Wizz Air.

In most cases where Ryanair is bigger than Wizz Air this is in relatively small country markets. The most obvious exception is Poland, mentioned above.

Another exception is Croatia. Although Croatia does not rank highly among Wizz Air's most important CEE markets, it is bigger than Hungary and Romania by overall seat numbers (week of 11-Jul-2016, source: OAG) and Ryanair is far bigger than Wizz Air in Croatia. 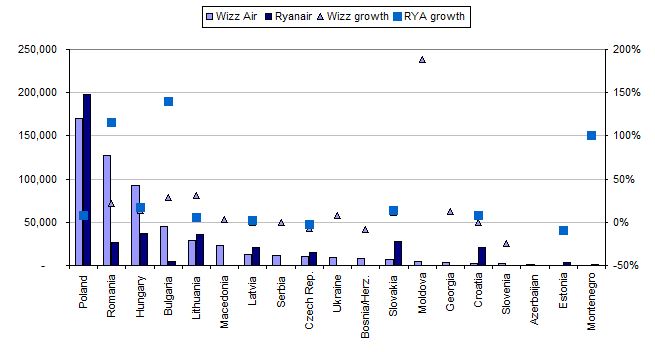 Although Wizz Air has more seats than Ryanair in three of its four largest CEE markets - Romania, Hungary and Bulgaria - these three countries are Ryanair's fastest-growing markets in CEE this summer. According to OAG data for the week of 11-Jul-2016, compared with 13-Jul-2015, Ryanair's seat numbers are up by 140% year-on-year in Bulgaria, by 116% in Romania and by 17% in Hungary.

Both are adding 12% more capacity this summer compared with last, but Ryanair is focusing its growth on catching up in those of Wizz Air's larger markets where it lags.

The chart below indicates the share of scheduled seats held by each of Wizz Air and Ryanair in CEE countries based on OAG data for the week of 11-Jul-2016. From this data it can be calculated that Wizz Air's overall share of seats in CEE this summer is 15.7% (versus 15.2% the same week a year earlier), and Ryanair's is 11.0% (versus 10.8% in 2015). 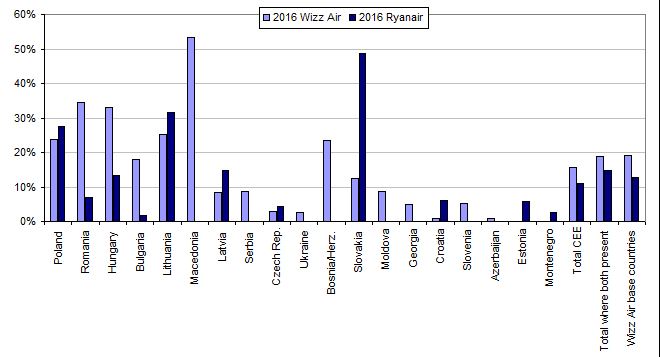 There are 20 overlapping airport pairs: 5% of Wizz Air Routes and 9% of its seats

Perhaps more important than which airline is larger in which country is analysis of how they compare on specific routes. Based on data from OAG for the week of 11-Jul-2016 Wizz Air operates 410 airport pairs this summer, all touching CEE at one or both ends, and Ryanair has 267 airport pairs to/from CEE airports.

The two compete head-to-head on only 20 of these routes and each is bigger than the other by seat numbers on 10 of the 20. However, Wizz Air is bigger than Ryanair on seven of the 10 largest head-to-head airport pairs and it has 27% more seats than its Irish rival across all 20 routes. 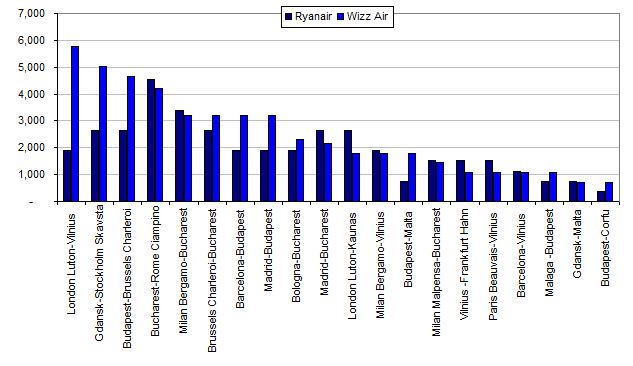 Overlapping city pairs number 57: 14% of Wizz Air Routes and 30% of its seats

The degree of overlap is greater if considered in terms of city pairs, rather than airport pairs. For example, in Warsaw and London (both are top five cities in Wizz Air's network), the two airlines mainly use different airports. Wizz Air operates from Warsaw Chopin and London Luton, while Ryanair uses Warsaw Modlin and London Stansted (it also uses Luton and Gatwick, but to a far lesser degree).

Based on analysis of city pairs, using OAG data for the week of 11-Jul-2016, Wizz Air and Ryanair overlap on 57 routes. Wizz Air has more seats than Ryanair on fewer than half (23) of these routes, but it tends to lead on the larger routes. Wizz Air is bigger on eight out of the top 10 and 14 out of the top 20 overlapping city pairs (ranked by Wizz Air's seat numbers on each route).

The overlapping city pairs are more concentrated on Wizz Air's largest routes. Ranked by seat numbers, Ryanair operates on eight out of Wizz Air's top 10 city pairs and 20 out of its top 30. There are only 11 overlapping routes among Wizz Air's smallest 200 routes. 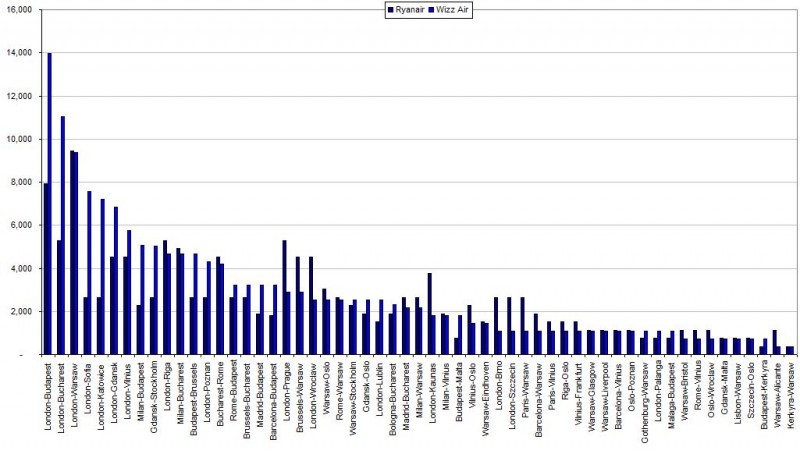 Ryanair expansion in CEE will increase overlap in Winter 2016/2017

The overlap between Wizz Air and Ryanair is set to increase. Ryanair has announced five new bases in Central/Eastern Europe for winter 2016/2017. These are Bucharest (three aircraft), Prague (two aircraft), Sofia (three aircraft), Timisoara (one aircraft) and Vilnius (two aircraft). According to Ryanair's own announcements it will launch a total of 34 new routes from these bases, of which 15 are routes operated by Wizz Air.

Ryanair plans 20 new routes from its Sofia base this winter (see table below). Ten of these routes are already operated by Wizz Air, and in almost every case Ryanair will deploy at least as much capacity as Wizz Air, or more. Exceptions, where Ryanair will have fewer seats than Wizz Air, are Sofia-Eindhoven and Sofia-Madrid.

Note that Ryanair's Sofia-London Stansted service, launched in Apr-2016, ahead of the base opening, will continue into the winter and also overlaps with Wizz Air (Sofia-London Luton).

It will launch four new routes from Bucharest, two from Prague, two from Vilnius and six from Timișoara.

Ryanair will also launch its first Serbia flights, with a twice weekly Nis-Berlin service from Sep-2016.

*indicates a route operated by Wizz Air.
**not a new base.
Source: CAPA - Centre for Aviation, OAG

Opportunities for both airlines will continue, but CASK will remain crucial as the overlap grows

Of course, this means that Wizz Air is comfortably the lowest cost operator on routes representing two thirds of its capacity, and there are plenty of growth opportunities for both airlines in CEE. Nevertheless, it is clear that low CASK will remain crucial in this region.

See related report: Wizz Air and Ryanair are well matched in the competition for Eastern and Central Europe markets

As CAPA observed in its analysis of Wizz Air's FY2016 results, much is resting on Wizz Air's fleet development plan. This is increasing the average seat count by replacing A320s with A321s – thereby reducing unit costs. It will further lower unit cost by introducing A321neo aircraft in FY2019.

The deployment of larger aircraft also leads to lower yield, but Wizz Air has said that, so far, the unit cost benefit outweighs this. As its network overlap with Ryanair increases, Wizz Air will need this balance to continue to work in its favour.