Winnipeg International airport is enjoying a period of solid passenger growth, averaging approximately 6% annual increases from 2015 to 2018. During 2018 the airport handled 4.5 million passengers, which was the highest throughput since 2009.

The airport features a mix of airlines operating various business models now that the ULCCs Flair and Swoop have introduced flights from Winnipeg. And although Flair’s capacity at Winnipeg pales in comparison to the airport’s largest operator Air Canada and WestJet, the ULCC’s entry into the market appears to have changed some of the competitive dynamics.

Winnipeg joins other airports of similar sizes in working to gain more nonstop flights. But the airport’s management realises that it is a long game, and they will remain patient in its campaign to attract more service.

Winnipeg’s passenger levels of 4.5 million in 2018 are essentially in line with other non-hub airports in Canada. 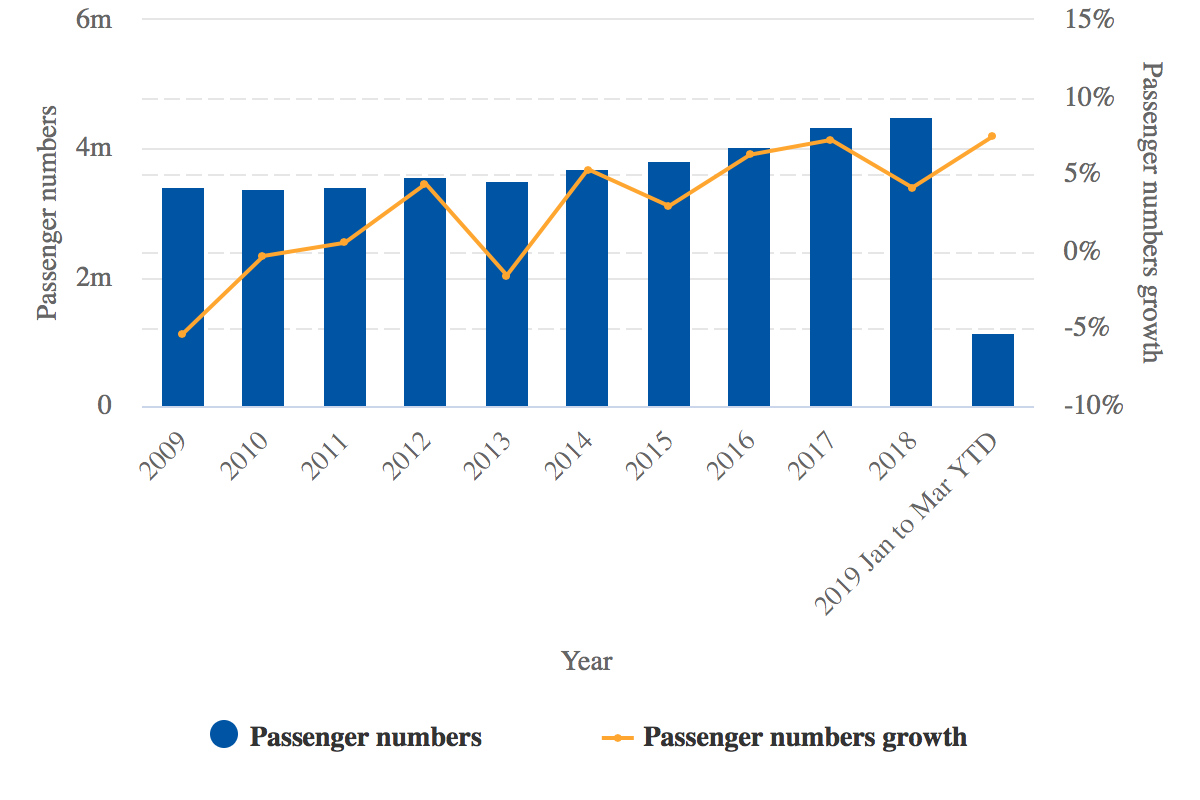 Data from CAPA and OAG show that as of late Jun-2019 Winnipeg has nonstop service to 45 destinations: 40 domestic and five international cities.

Its international markets include service from United to hubs in Chicago O’Hare and Denver, flights by Delta to its hub in Minneapolis, and service from WestJet to Las Vegas. WestJet also offers seasonal service from Winnipeg to London Gatwick.

Approximately 92% of Winnipeg’s ASKs are deployed in the domestic market, and international routes make up 8% of the airport’s ASKs. 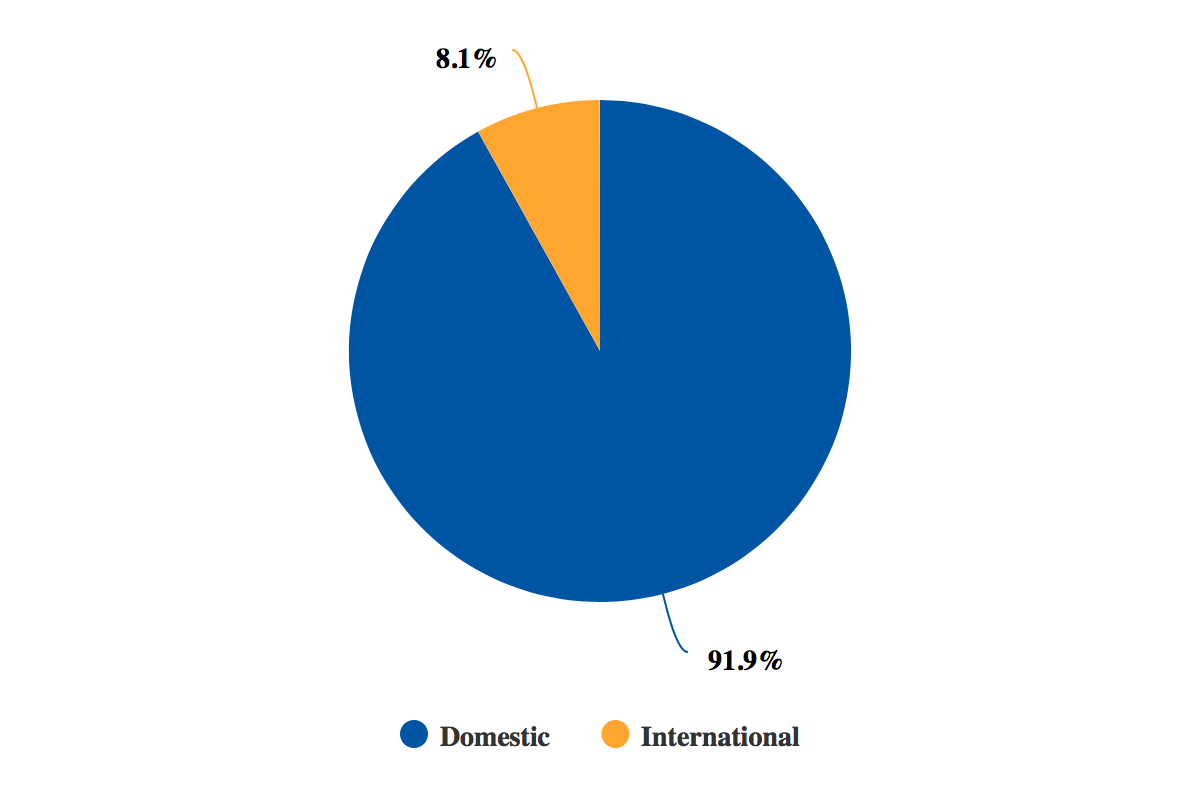 The entry of ULCCs has been beneficial for Winnipeg passengers

Winnipeg’s location in central Canada makes the airport attractive both to hub and spoke airlines for bolstering connections at hubs and to airlines operating point-to-point flights.

WestJet and Air Canada are Winnipeg’s largest airlines measured by seat deployment (as of late Jun-2019). 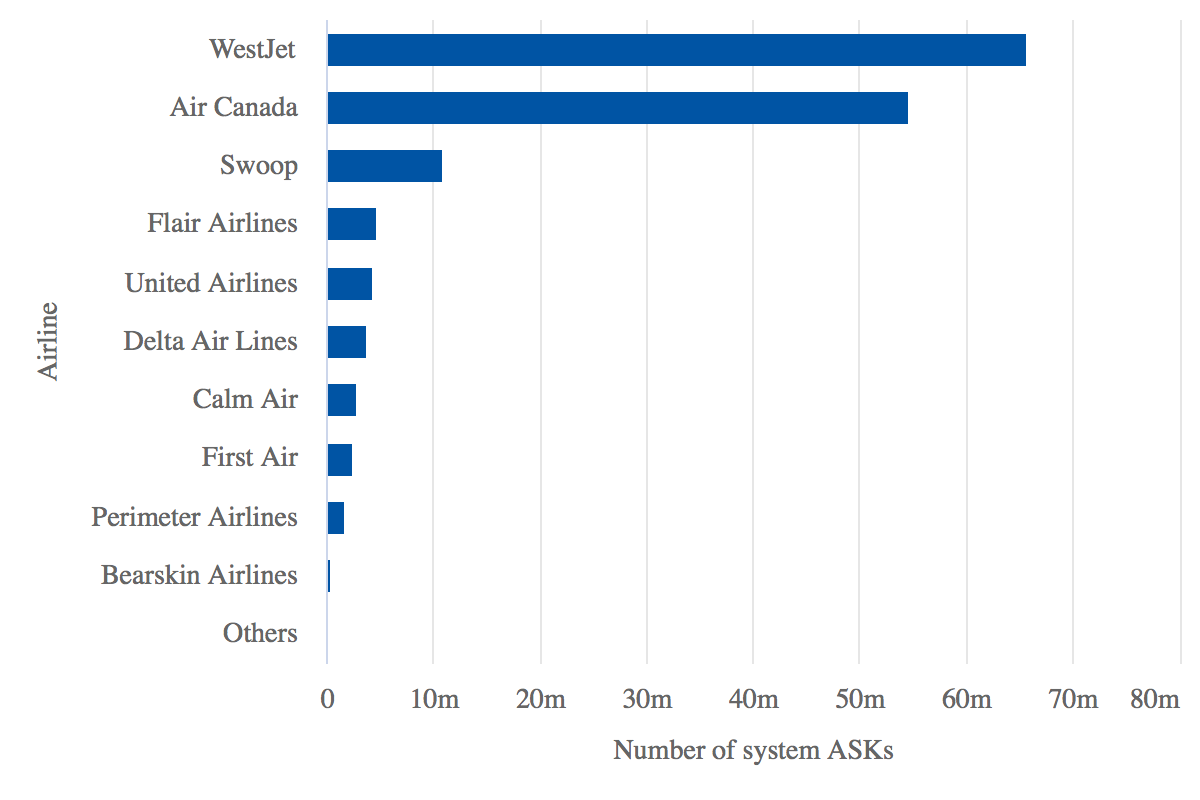 The start-up ULCCs Swoop (a subsidiary of WestJet) and Flair are the airport’s second and third largest airlines measured by ASKs.

Schedules in CAPA and OAG show that Swoop operates services from Winnipeg to Abbotsford, Edmonton, Kelowna and Toronto Hamilton. Flair’s flights from Winnipeg include Edmonton, Toronto Pearson and Calgary.

Flair has been operating from Winnipeg for more than a year, and Winnipeg Airports Authority CEO Barry Rempel told globalnews.ca in Apr-2018 that although Flair represented a lower level of capacity at Winnipeg, “…just the fact that they’re here, and they have put certain pricing in the market, has stimulated the market. It’s been free enterprise at work. Because Flair is here, WestJet and Air Canada are being far more competitive…”.

As of late Jun-2019, Flair represented 3% of Winnipeg’s system ASKs compared with 44% for Air Canada and approximately 37% for WestJet.

Another aspiring Canadian ULCC, Jetlines, is also aiming to add service from Winnipeg, having forged a deal with the airport early in 2019 to launch fights. The ULCC has stated that it plans to inaugurate service in Dec-2019.

Winnipeg’s five largest domestic routes measured by ASKs are Toronto, Vancouver, Calgary, Edmonton and Montreal, which somewhat reflects the airport’s geographical position in the centre of the country. 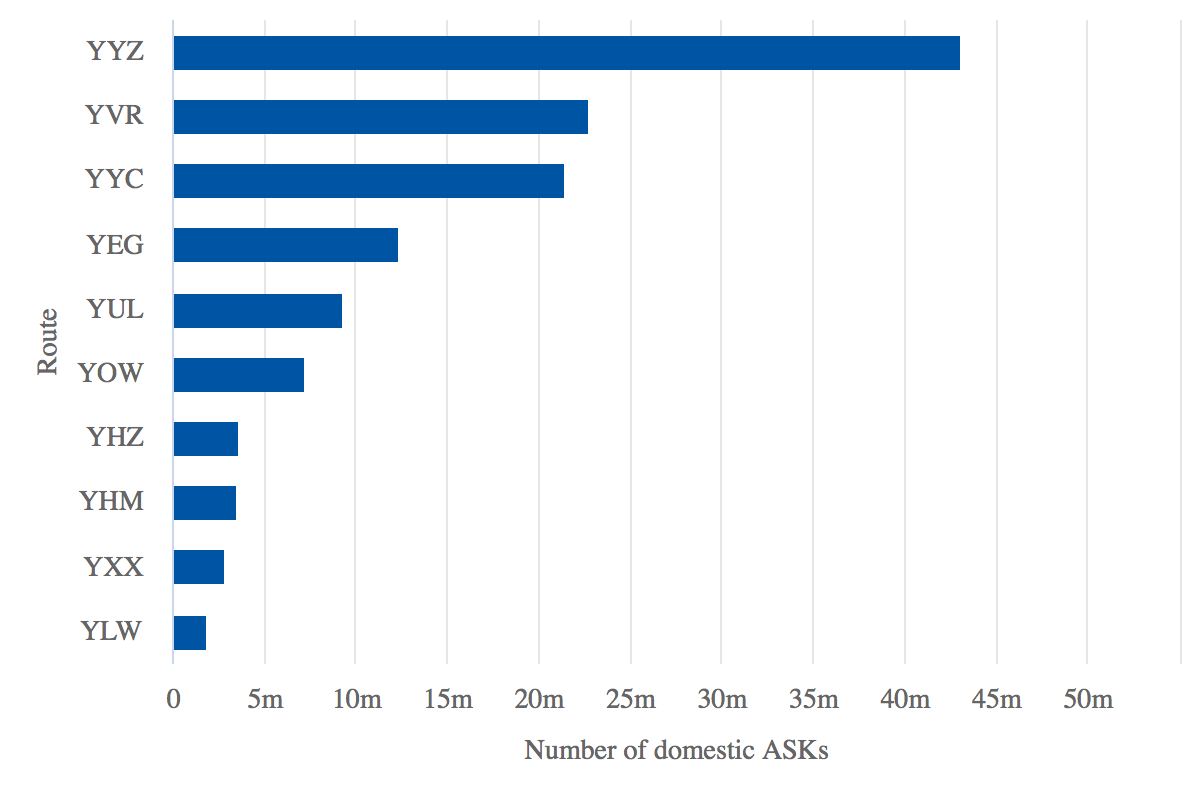 Similarly to other airports, Winnipeg tracks the number of passengers travelling on connections in order to gauge the potential success of direct flights to certain destinations.

In the same report cited above (from Apr-2018), Mr Rempel told globalnews.ca that approximately 42,000 passengers per year travel between Winnipeg and New York, and that 35,000 to 40,000 “is what it takes to make sure a series of flights is sustainable”. He also remarked that whenever a direct flight is added from the airport the number of passengers flying to that destination initially jumps between 20% and 40%, and that is a level that is usually sustained.

Winnipeg’s airport operator understands that even with solid data, airlines still need to do their own analysis to determine a potential route’s viability, and making a firm decision often takes years. But the airport’s traffic continues to trend in the right direction. During 1Q2019 Winnipeg posted a 7.5% increase in passenger throughput year-on-year, with a 9.5% jump in Mar-2019.

The city of Winnipeg has garnered the distinction of being named to Airbnb’s top 19 destinations to visit in 2019. Winnipeg was only one of three North American destinations to make the list, joining the Great Smoky Mountains and the Catskill Mountains.

Airbnb has calculated that searches for Winnipeg have increased 140% year-on-year (the report was published in late 2018), and highlighted Winnipeg’s variety of cultural activities, including 'The Forks' historic district that has been transformed into shops and restaurants and outdoor spaces. There is also the city’s Museum for Human Rights, which is “the first of its kind dedicated entirely to the evolution, celebration and future of human rights”.

All the trends remain favourable for continued passenger growth at Winnipeg

Winnipeg’s passenger growth bodes well as the airport continues the ongoing process of working with airlines to gain additional services. Its service footprint is solid, consisting of key domestic destinations and some larger transborder markets.

An endorsement from Airbnb will fortify Winnipeg’s tourism industry, which also has favourable prospects. The Conference Board of Canada has estimated that overnight overseas travel to the city will grow 6% in 2019 and remain above 5% in subsequent years.

All the trends are pointing in the right direction for continued passenger growth at Winnipeg International airport.