Will the British Airways strike light a ring of fire, as flight attendants of the world unite?

As the UNITE-led strike deadline of British Airways flight attendants approaches, forces are lining up around the world to show solidarity. Many of the statements are typical of similar events in the past. But on this occasion it has a different ring about it. There appears to be a growing feeling that this strike could represent a last stand against the general reduction in status of the inflight group that has been achieved over many years. And the most dangerous enemy is one who feels he has nothing to lose. Meanwhile though, BA investors seem largely untroubled.

Following its announcement of strike action against British Airways, UNITE is actively soliciting support from unions in countries where British Airways operates. One is the powerful Teamsters union. Jim Hoffa, General President of the International Brotherhood of Teamsters, represents around 1.4 million workers in the US. Self described as “North America's Most Powerful Union”, the Teamsters offer the “strength to negotiate better wages, health and retirement benefits”.

This week Mr Hoffa stepped up to offer at least “moral support” and “whatever material support we can give” to UNITE. “We want to act in solidarity with our brothers and sisters in England and we want to be supportive of UNITE,” he said in a Sky TV interview, “we don’t rule anything in or anything out”.

Speaking to Dow Jones, Mr Hoffa offered, “Unless the dispute is resolved, we expect to see a range of lawful expressions of solidarity with the strikers from aviation workers around the world. They've had support from Unite in the past, and they're ready to help in return.”

Already unions in other countries have felt encouraged to support the strike, as far afield as Australia, where the Transport Workers' Union called on the Australian Government to ensure BA volunteer cabin crew are “properly qualified” and, as a consequence, ground handlers may refuse to load and clean BA aircraft, as it may be “unsafe” to do so if unqualified staff were acting as cabin crew.

Germany’s Ver.di stated its ground handlers would refuse to cooperate with strike-breaking staff and that it would join the strike immediately if its staff  were “targeted” by BA. Spanish and Italian unions are also offering support. And several airline flight attendant unions are also rattling their sabres.

Just how badly does this affect British Airways financially?

Analyst calculations of the cost of a strike on any airline vary widely, but there is consensus that the cost quickly runs into many tens of millions of dollars, both in immediate cash flow losses, and in the semi-permanent damage to reputation, along with attendant costs of recovery – for example by discounting to regain lost passengers once the industrial action is over.

A one week strike can easily cost a company USD100 million, depending on what factors are loaded into the calculation. There are then of course major flow-on losses suffered by the numerous suppliers who work within the industry. No airline management would lightly enter into a confrontation with any of its unions, particularly one which has the power to ground aircraft.

And, after decades of management unwillingness to confront globally-linked unions it is precisely the groups with that power who have achieved the often more attractive terms and conditions. As airline managements seek to adapt to a much more competitive environment now, staff expenses offer one of the few controllable cost items that might restore their ability to compete.

So, for British Airways management, the battle is a long term one – arguing that the basic survival of the airline is at stake, a truly long term issue. So, strategically, some short term loss, if it achieves the goals it seeks is worthwhile.

Even from the market point of view the effects of the recent history involving the UNITE action and the various negotiations offers little clear light on how investors really think.

Sharemarket timetable of a strike

The confrontation with cabin crew had been brewing for many months, as other staff cost cutbacks were made in BA. The formal announcement of a pay freeze and headcount reductions for the 14,000 cabin staff was made on 5-Oct-2009, quickly followed by UNITE’s threat two days later that the plan must be abandoned. The alternative was a threat of a Christmas strike.

The market was totally unmoved by this initial flurry, and BA’s stocks moved upwards with the overall market.

After the union lost a legal challenge to prevent the cutbacks on 30-Oct-2009, a strike vote began, due to be completed on 14-Dec-2010. There was never any doubt that a majority of the cabin crew would support industrial action. BA’s share price continued largely unmoved by any threat of strike. As the wider market moved down in late Oct-2009 and early Nov-2009, so airline stocks also fell, magnified by their sensitivity to economic winds. Here, BA’s share price mirrors similarly significant falls as its major competitors, Air France and Lufthansa. 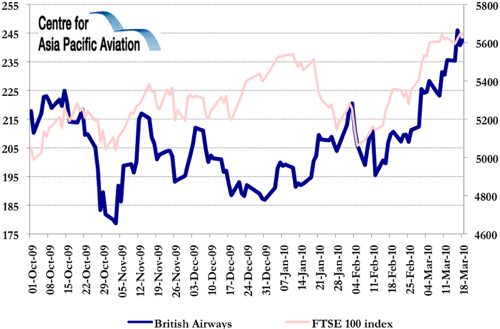 But, when UNITE confirmed 92.5% of cabin crew had voted in favour of the strike and announced that day that a 12 day strike over Christmas was planned, most – including many cabin crew – were surprised at the magnitude of the threat. This was the moment for investors to get worried and the airline’s share price veered away from the generally more positive pre-Christmas goodwill, losing some 10% of value. From here, recovery took a little time.

Presumably designed as a major play to get BA in a position to compromise quickly, the strategy was thwarted by the airline’s successful legal action challenging the validity of the vote and preventing the strike going ahead, announced on 17-Dec-2009. This had however already cost the carrier dearly, as passengers cancelled bookings and alternative arrangements were made. Public sympathy was mostly on the side of the airline, given the difficult economic conditions most Britons were suffering, with cabin crew seen as being extremely well paid.

Despite the strike’s - temporary at least – resolution, the share price remained depressed, against the tide, until well into Jan-2010 and despite a wider recovery in airline stocks and the market generally. Another strike vote was announced on 18-Jan-2010. On 22-Feb-2010, it was announced that cabin crew had again voted in favour of a strike, with 80.7% voting for the action. On the same day, the union and BA resumed negotiations.

It did not take long for investor appetite to return and BA’s capitalisation is now well above its level of last October. Meanwhile, however, Air France’s share price remains only at the same level and Lufthansa’s is well below where each was at the beginning of Oct-2009.

This week’s announcement of another strike plan seems to have had little impact on buyers – yet. There is perhaps an expectation that the dispute will be resolved. On this occasion, perhaps chastened by the popular backlash in Dec-2009, UNITE has avoided plans for an Easter strike, instead setting up one for this weekend and one for next The resultant impact on consumer and investor sentiment is probably more muted as a result.

Overnight talks on 18/19-Mar-2010 were apparently unsuccessful in achieving a resolution. An announcement one way or another is still awaited, but it does seem unlikely that the two opposing positions can be readily compromised.

So today’s movement is likely to guide where the share price will head over the next week, leading up to the first limb of the strike.

Situation (nearly) normal. No short selling imminent. But there is a smell of burning

The bottom line for investors however appears to be that, unless a complete stoppage of the airline is imminent, the damage is limited. With substitute staff trained and ready to maintain around two thirds of BA’s schedule, the global ring of fire is still sputtering. And, unless there is a serious global escalation directed at British Airways, it should ride this storm comfortably – at least as far as its market capitalisation is concerned.

But, in the process of this event, global sensitivities are being aroused. Whatever emerges from the BA-UNITE confrontation, something is smouldering and is unlikely to be extinguished totally.