Oil prices surged again on Thursday as investors shrugged off European debt worries and focused instead on more positive economic data from the US. Having slumped below USD65 per barrel earlier in the week, benchmark crude for July delivery rose USD3.04 yesterday to settle at USD74.55 per barrel on the New York Mercantile Exchange.

OPEC officials had been preparing to bolster the market if prices slipped below USD65 per barrel, according to a Reuters report earlier in  the week, after three weeks of falling prices. Libyan OPEC official, Shokri Ghanem, stated that the cartel was closely monitoring the situation, but had not yet seen any need to intervene.

Earlier in the year, OPEC officials stated they were happy with oil at USD75-85 per barrel, but were concerned about overcapacity and the effects that any economic jitters could have on the outlook for recovery. Europe’s sovereign debt concerns, and the appreciation of the US dollar, have contributed to the recent oil price weakness. The result has been the sharpest downward correction on oil prices since the speculation bubble burst in Jul-2008 and oil prices dropped from USD145 to USD30 over just five months.

Oil (West Texas Intermediate) finished the week to 25-May-2010 at USD64.78 per barrel on the NYMEX, its lowest price since Jul-2009, but surged in trading on Wednesday and Thursday. 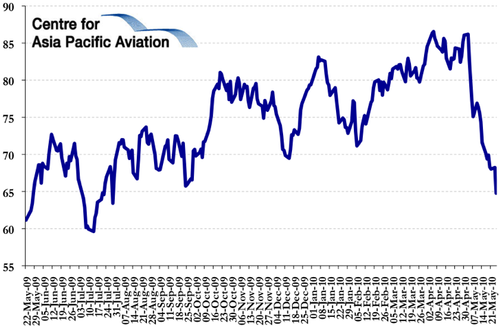 The decline in jet fuel prices has been equally precipitous, with all prices at all exchanges dropping below USD200 cents per gallon for the week to 25-May-2010. Singapore prices were down 7.9%, dropping to 189.36 cents. Most other markets fell 3% to 3.5%, remaining above 190 cents per gallon. Jet fuel prices are around a quarter higher than the same time last year, while WTI prices are now almost exactly where they were 12 months ago. Airlines would be concerned about the growing disparity between crude and kerosene. 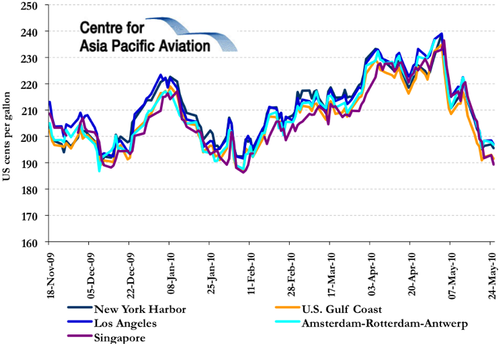