Why Singapore Airlines is reducing Houston to less than daily service

Singapore Airlines (SIA) decided earlier this week to reduce capacity to Houston, which in late March will become the carrier’s only US destination without daily service. The decision to drop two of the seven weekly Boeing 777-300ER frequencies SIA currently operates on the Singapore-Moscow-Houston route is a response to low demand. Houston has been the worst performing US destination for SIA since the carrier began serving the Texas city in 2008.

Data from the US Department of Transportation (DoT) show that SIA’s average annual load factor between Houston and Moscow has been 61% or lower since the service was launched in Mar-2008. Despite an average 55% load factor in 2009, SIA decided last year to increase frequency to Houston from five weekly flights to daily. But this increase, which went into effect in Nov-2010, will be reversed as SIA reverts to five weekly flights from the start of the next Northern Hemisphere winter season on 25-Mar-2012.

Houston is an attractive long-haul premium market given its large concentration of oil and gas companies. Two Middle Eastern carriers, Emirates and Qatar, also serve Houston as well as four European carriers – Air France, British Airways, KLM and Lufthansa. But Houston can be a difficult long-haul market for filling the economy class cabin on a year-round basis.

A look at SIA’s performance on Houston-Moscow shows loads are typically highest in the summer months when there is more leisure demand. In the winter and shoulder seasons, the monthly load factor has typically been in the 50s or even lower. 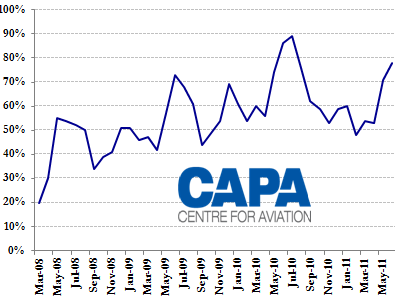 In 1H2011, Houston had the lowest load factor among SIA’s seven US routes for five out of six months. The average load factor on the Houston-Moscow sector in 1H2011 was only 61%. 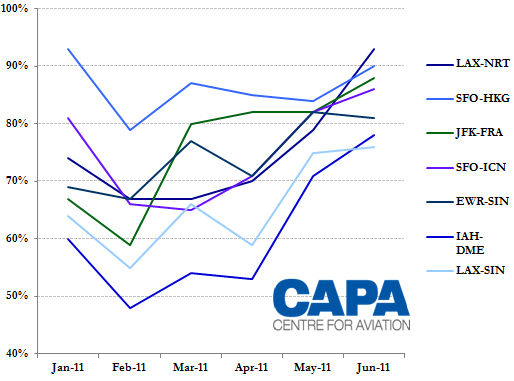 Source: CAPA – Centre for Aviation & DoT
Note: Based on roundtrip passenger and capacity (seats) data for all seven routes

In 1H2010, before SIA upgraded the route from five weekly flights to daily, the average load factor on Houston-Moscow was a more respectable 65%. But in 1H2009, during the global economic financial crisis, the load factor was only 53%.

SIA’s struggle to fill up its Houston flights, particularly economy class, is evident in its pricing strategy. Houston-Singapore typically has lower economy class fares than New York-Singapore although it is a longer flight. For example, SIA offered promotional round-trip fares between Houston and Singapore of only USD1036 for travel in Oct-2011, Nov-2011 and early Dec-2011.

SIA also unveiled plans in Sep-2011 to upgrade its Singapore-Frankfurt-New York service from 747-400s to A380s, effective 15-Jan-2012. This is currently SIA’s last remaining 747-400 route. SIA maintained a respectable load factor of 76% on the New York-Frankfurt leg in 1H2011 although the decision to go with the A380 is more a response to high demand between Frankfurt and Singapore. The trans-Atlantic leg of this route has traditionally had lower load factors than the Europe-Asia leg, especially in the winter and shoulder seasons.

DoT data show SIA’s exclusive non-stop flights to the US, which operate with all-premium A340-500s configured with 100 business class seats, have performed fairly well this year. The Newark-Singapore flight recorded an average load factor of 75% in 1H2011. The Los Angeles flight had an average load factor of 66% in 1H2011 but has performed better since capacity was cut from seven to five weekly flights at the beginning of May. Both non-stop routes were also scaled back during the global economic downturn as load factors sunk below 50% in late 2008 and early 2009.

While SIA has struggled in Houston, it is unlikely the carrier will drop the route entirely. Houston is an important business destination with high yields in business class. Five weekly flights with no service during off peak days are typically sufficient to meet demand from the business sector, as is the case with SIA’s Los Angeles-Singapore service. But any further reduction would make it difficult for SIA to continue to meet the needs of business passengers.

Low load factors and low economy yields during most months of the year make Houston-Moscow challenging. But SIA, which several years ago also served Chicago and Las Vegas in the US, is hoping strong premium demand is sufficient to retain the service. SIA, given its strong focus on the top end of the market, would not want to cede Houston-Asia premium passengers to its competitors from Europe and the Middle East.