Why is the US airline system dysfunctional?

WEEKLY REFLECTIONS WITH RON KUHLMANN AND THE CENTRE. When our children were small, one of their favorite books was Sam’s All Wrong Day, in which a small boy suffers a series of misadventures that seem overwhelming. But, being a children’s book, it all eventually turns around. Yet if the grown-up Sam works for an airline, his story may not have such a rosy ending—especially if his employer is a US carrier.

This past week has revealed continuing poor results for the majors and the American carriers are announcing still more cuts and dire predictions. This current crisis, with its plummeting demand, overlapped the previous crisis, fuel cost, creating an environment in which the airlines were set upon from all directions. In response to high fuel, the US carriers were the most aggressive in reducing capacity and there was some hope that they would be rewarded for that effort. So far? Not so much.

The fuel spike was seen as primarily a cost problem; fares needed to be raised in order to cope with rapidly escalating operational costs. There were predictions that air travel would again become an elite mode of travel, available only to those with the means to pay higher fares. The end result was seen as producing a smaller, perhaps more profitable group of carriers that would cater to these more affluent travelers.

It did not quite turn out that way. Just as fuel prices began to moderate, premium travelers began to disappear—in droves. As consumers shunned travel or moved to economy seats, loads and yields fell—and continue to do so.

While these back-to-back crises are being felt globally, there are some preconditions and poor decisions that are unique to the American marketplace, making the pain far more acute in our domestic sector.

Some of the bad moves were private ones, but not a few result from underinvestment by government.

History as a cause

First, the US has had a more competitive landscape, both before and after deregulation, than any other region. Even while still limited in by government, the pre-deregulation US market had an astonishing number of airlines, all private, and all vying for a (bigger) piece of the pie. In contrast, most of the rest of the world had only a single government owned national carrier—and in a few cases a secondary player in certain markets: think UTA or British Caledonian. Consequently, deregulation in the US market called for more changes by more players, all well-accustomed to market squabbles and determined to dominate.

The main reason for the difference in scale was of course that no other country possessed such a large domestic market and intercontinental presence. Consequently, US airlines had very large fleets and in the aggregate had far more aircraft operating than any other nation.

Figure 1 shows the ongoing fleet size disparity between US airlines and some of today's primary competitors. Deregulation took effect in 1978 and the fleet numbers reveal a huge US industry already at that time. Even in a regulated, and therefore more costly environment, Americans had vastly more choices. Deregulation freed airlines to initially compete domestically, with foreign international competition coming both later and more gradually.

The immediate effect of the post-1978 competitive environment was the rapid establishment of powerful domestic hubs from which myriad new routes could emanate, replacing the linear/grid route structures that had been the norm. Europe's airlines, which flew predominately internationally, were also strictly regulated, and, like most nations in the rest of the world, had only one logical operational hub. Even as Asia and Europe liberalised, the operational focus remained in one city, usually the capital.

Furthermore, while London, Paris and Frankfurt are not far apart, they are divided by national borders and individualized economic spheres - despite the EU. However, as hubs, Detroit, Cleveland, Cincinnati, Chicago, Cleveland and Pittsburgh are not only in close proximity but they are also tapping the same internal market.

Consequently, within a very short period, smaller cities that had had only limited regulated options were now linked to multiple networks with a choice of connecting airlines and cities. As an example, in 1980 passengers flying from Phoenix to Paris were generally forced to make a double connection involving multiple carriers—except for the short-lived Braniff option over Dallas. In 2000, that same passenger could make the same journey with a single on-line connection at Dulles, O’Hare, St. Louis or London Gatwick. Domestically, the choices were even more dizzying. Aggregate supply and demand were seldom rationalized.

The byproduct of this change and its ongoing evolution, was that airways and airports were forced to deal with huge increases in volume as well, as the peaks at hub airports which focused most of the activity into sequential short periods of intense usage.

To accommodate all this to-ing and fro-ing, new gates and terminals were constructed often with private (airline) funding - but almost no new runways. Similarly, the air traffic control facilities found themselves faced not only with more traffic overall, but also with more concentrated scheduling that overwhelmed capacity. Much of this investment in multiple hub facilities came at great cost to the carriers as they tried to make their hub(s) the most desirable and efficient. Again a similar situation prevailed abroad, but in the vast majority of cases this expense was at a single location.

Airlines laid claim to their hub cities and the local governments frequently aided in the construction and expansion requested by their incumbents. Unfortunately, much of that construction has subsequently been made redundant as airlines contract—especially in places like Pittsburgh or St. Louis that constructed infrastructure primarily to meet the needs of connecting traffic artificially created by the dominant carrier.

Additionally as the Pittsburghs, Cincinnatis and Denvers grew, and deregulation spread to foreign routes, establishing new international gateways, more international traffic bypassed the traditional coastal gateway cities and passengers who would have previously connected over New York or San Francisco now could travel from London to Omaha via multiple US ports.

So here we are 31 years after deregulation and the US carriers continue to struggle in ways that are unique to the region. And, while the market may have declined by other measures and standards, the US continues to lead the world in the number of aircraft operated. 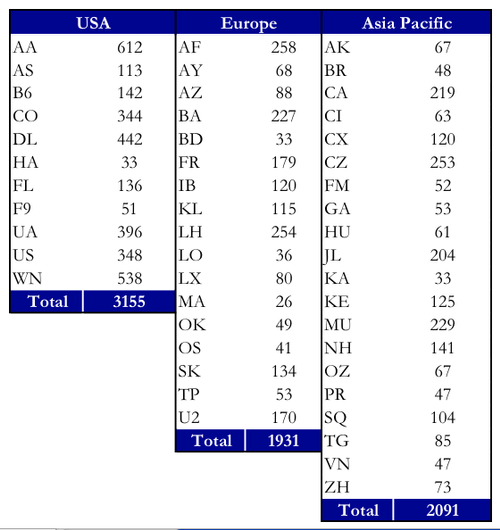 The above table gives a very rough measure of the operational fleets in each of the dominant aviation markets. The numbers shown are for mainline fleets only and, insofar as reported, include no regional aircraft. If those were included, the numbers in the US especially, would skyrocket. For instance, American Eagle alone has a fleet of 220 aircraft.

Some regional carriers should be included, but their inclusion would not significantly change the ranking of the totals. Even with the Russian carriers added, the European total would significantly lag the US.

So, there are some things that can be said about the US market that may help to explain its chronic ills.

First, though the US covers a large area and has a population that uses air travel as an important means of transport, the reality is that many more aircraft are competing for the market and infrastructure. Much of that demand is centered on very small patches of real estate such as New York. While Atlanta continues to reign as the busiest airport, it falls far behind if the combined traffic totals of JFK, LGA and EWR or ORD and MDW are considered to show traffic to metro areas. Only London’s cumulative figures can compare to these behemoths. All of these considerations add complexity, delay and cost for US operators.

Second, the competitive environment remains unparalleled in any other domestic region. Between New York and Miami/Ft Lauderdale there are six carriers scheduling flights throughout the day between five airports. The OAG listing for New York/Chicago fills an entire page; four columns of very tiny print. In no other market will you find so many entries of this kind. Amidst that kind of scheduling, it is possible to fault the airlines for overkill of their own making. While that is a valid observation, no one wants to be the first to leave the party. As long as that kind of corporate mindset exists, profitable operations will remain elusive.

Third, oft stated but ever true, it is not easy for US airlines, at least major ones, to disappear. Bankruptcy laws that undergird the survival of weak carriers and low barriers for new entrants produce a constant churn with little long term resolution.  Nor has consolidation proven to be terribly effective as a tool for rationalizing the market - even on the rare occasions where antitrust immunity approval is given.

Perhaps there is no single definitive reason for the sorry state of many US airlines. Like aircraft accidents, the final outcome is almost always due a series of interlinked events and actions that combine with terrible final results. The US airlines for decades enjoyed a position of unrivaled power and influence. That is no longer the case and apparently the soul-searching necessary for a turnaround has yet to be successfully accomplished.