Where to next for the Airbus A380?

The A380 customer list reads like a who’s who of the most successful and ambitious airlines in Europe, the Asia Pacific and the Middle East, with 16 customers sharing 200 orders between them. 16 aircraft are now flying with Singapore Airlines (eight), Qantas (three) and Emirates (five), plying routes between major crowded hubs such as Sydney, Singapore, Paris, Hong Kong, Tokyo and London.

The A380 now serves more than a dozen airports worldwide. However, there are also some more unusual destinations among the A380’s current and future routes (such as Reunion Island), as well as a few that are notable by their absence (such as New York, which was briefly served by Emirates from Dubai before the aircraft was switched to the capacity constrained Toronto route from Mar-2009).

What is striking is the deployment of the aircraft on the so-called “kangaroo route” between Australia and Europe. 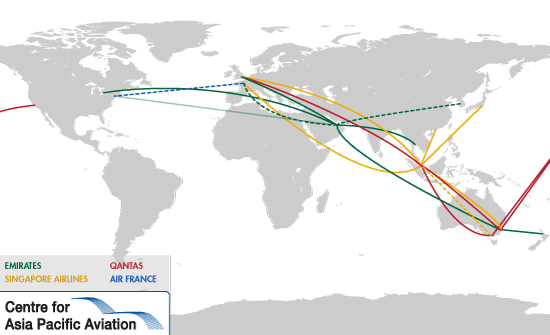 Los Angeles is currently the sole A380 destination in the US (served by Qantas from Sydney and Melbourne). The aircraft is set to return to New York shortly, with Air France announcing plans to deploy the aircraft to JFK from Paris CDG from Nov-2009.

Emirates' A380 plans also include Paris CDG from Feb-2010 and Incheon (South Korea) from Nov-2009 and a return to New York (denoted by the light green line in the graphic above) at an undisclosed date.

New York appears to be a natural stomping ground for the A380. A global financial and transport hub, it competes with London as one of the busiest, most congested and complicated airport systems in the world. The A380 theoretically provides more capacity with a single larger aircraft, allowing airlines to make better use of valuable take off and landing slots, and also relieving pressure on airspace and runway capacity.

But the very issue of capacity is a critical one for airlines amid the global economic recession. Latest data from around the world shows airlines continue to fail to align capacity with demand (eg, the latest Association of European Airlines data shows renewed pressure on load factors). Furthermore, Business traffic - the market most initial A380 operators are targeting - has crumbled and a recovery is not imminent. As a result, yields are under considerable pressure and airlines are having to re-think their aircraft configurations.

A premium machine being re-thought

The early A380 operators, Singapore Airlines, Qantas and Emirates, have shied away from very-high capacity configurations, preferring a larger proportiom of premium seats, with typical Business class layouts of 60-76 seats, and 12-14 First Class seats.

Early A380 configurations typically offer 90-110 seats more than existing B747-400 configurations, with the difference mostly in additional numbers of Business and Economy seats. Qantas is in the unique position at the moment as the only A380 operator to offer a four-class configuration, with 32 Premium Economy seats.

But less than 12 months into the global financial crisis, the next recipients of the A380 appear to be taking a new approach to seating densities. By the end of the year, Air France will be operating A380s with a 538-seat configuration (9/80/499) on the Paris-New York route. Lufthansa, due to receive its first A380 in late 2009, will reportedly operate the aircraft with 549 passengers in three classes. Lufthansa and Air France will effectively generate 20-22% more productive capacity from their A380s than Qantas.

The days of very high density A380 could also be accelerated by the downturn. Emirates has three different A380 layouts planned, one with 600-644 seats, for short haul markets. Air Comet plans to operate Europe-South America services with more than 500 economy seats while Air Austral expects to configure its A380s with a tremendous 840 seats, in just a single-class configuration. (See related article: Airbus A380 rewrites the mass market rules. Airbus now marketing seriously low cost aircraft).

While the aircraft is now into its second year of service (Singapore Airlines has already carried more than a million passengers on its A380s), it seems that the aircraft is increasingly becoming a victim of the global economic downturn and the cash crunch facing airlines. In the past 12 months, Qantas, Kingfisher Airlines and British Airlines have announced plans to defer their A380 orders, joining Virgin Atlantic and ILFC, which pushed back their orders after Airbus announced production delays for the aircraft in late 2006.

Potential additions to this list are Singapore Airlines, Thai Airways, Air France and China Southern. Over the past six months, all of these carriers have reportedly been considering delaying their mid-term A380 deliveries (though near-term delivery commitments are being maintained).

Widebody deferrals are nothing new at the moment, with Boeing's long-range B787 and B777 programmes also suffering. The passenger variant of the A380 has so far escaped any outright cancellations, unlike Boeing’s new B787, which has seen 73 orders vanish this year, to go along with several cancellations last year.

Ongoing production issues have also forced Airbus to adjust its A380 delivery schedule. In May-2009, the company disclosed plans to deliver 14 aircraft over 2009 and “more than 20” in 2010, bringing the number into service to 35 by the end of the decade. However, Airbus cautioned that onward production rates and deliveries are “dependent on airline demand and availability of customer financing”, meaning that if the crisis continues, more deferrals could loom.