Where to next for Ryanair? Long-haul venture beckons

One very big conclusion can be drawn from Ryanair’s move to call off talks with manufacturers for an order for 200 more narrowbody aircraft for delivery from 2013 to 2016: the current economic downturn has been neither deep or long enough to deflate baseline input prices (aircraft, airport charges and fuel), or cause the level of attrition of rivals needed to sustain Ryanair’s mid-term short-haul growth strategy. A massive change of strategy is in the wings. Enter Ryanair Long Haul.

Such a shift has been expected for some time. In Jun-2009, The Centre published a SWOT Analysis on the LCC, entitled ‘Ryanair: Addicted to growth, a great model for bad times’, which noted:

“Ryanair will soar in the next 12 months, but its longer term future faces considerable questions…By early next decade, Europe's biggest LCC will be threatened by the kind of calcification issues plaguing its archetype, Southwest [Airlines]. Fuel prices will rise. And as Southwest has found, the number of markets Ryanair can ultimately tap is finite. The current economic downturn is providing short-term relief on both fronts”.

The aircraft order books of the major manufacturers have not “collapsed” as hoped by Ryanair CEO, Michael O’Leary. Airbus and Boeing still sit on massive short-haul aircraft production backlogs, led by Ryanair and numerous LCC clones around the world.

Ryanair alone still has outstanding orders for 112 B737s scheduled for delivery over the next three years (48 in 2010, 37 in 2011 and 27 in 2012). Deliveries of these aircraft are not affected by the recent ‘breakdown’ in negotiations with Boeing over an order for 200 more B737-800s, so there is still some considerable expansion left in Ryanair Short Haul for the next three years.

What next for Ryanair? Dividends, long-haul – or both?

But as Ryanair’s short-haul growth model looks increasingly fragile over the medium and longer term, a revised business plan is now in the works, with details to be revealed next quarter. The carrier stated it would include “much reduced” capital spending that will generate “substantial” surplus cash for distribution from 2012 to 2015, according to the carrier.

Ryanair Short Haul will become a significant cash-cow over the next few years with its diminishing capital investment programme. This will provide O’Leary all the funding he will need to launch his long-haul venture (let’s call it Ryanair Long Haul).

Trans-Atlantic consolidation by the established players will provide an opportunity for a discount point-to-point entrant, and O’Leary will be looking to cash in. The timing will once again reflect the availability of cheap aircraft. So Boeing and Airbus can expect another knock on the door from O’Leary, for discounted widebodies.

Shares in Ryanair rose 6.5% on Friday – the most in seven months – as investors welcomed the prospect of the introduction of dividend payments. (There have been no dividend payments since Ryanair was listed in 1997). 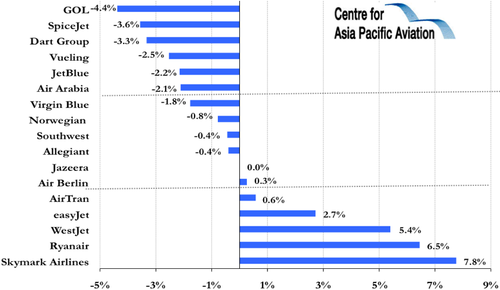