WestJet continues to be the strongest player in Canadian aviation

Calgary-based WestJet continues to outshine legacy rival Air Canada as the low-cost carrier appears to be excelling in every facet of its business. Recent high-profile launches in the US transborder business markets of New York and Chicago are furthering the carrier’s push to expand its ranks of business passengers, and a partnership with Delta on connections through New York will bolster WestJet’s goal of enlarging its presence in the US transborder markets. At the same time, communities are continuing their lobbying efforts to secure WestJet’s low fare brand to their regions in the hopes of either gaining improved air access or introducing rationalised pricing on monopoly routes. All this is occurring as WestJet reported significant traffic growth of 7.2% in May-2012 compared with 1.8% growth at larger rival Air Canada.

WestJet made pivotal moves beginning in May-2012 when it launched flights from Vancouver and Calgary to Chicago O’Hare followed by the Jun-2012 debut of flights in the high-yielding business market of New York-Toronto.

Prior to the launch, WestJet management cautioned that markets such as Chicago and New York would have a ramp-up period, but overall were pleased with booking volumes on the routes, and stressed the benefits WestJet would achieve from the codeshare agreement it has with Delta at New York LaGuardia, where Delta is rapidly growing its operations into a hub and currently accounts for 27.7% of the seat capacity at the airport. 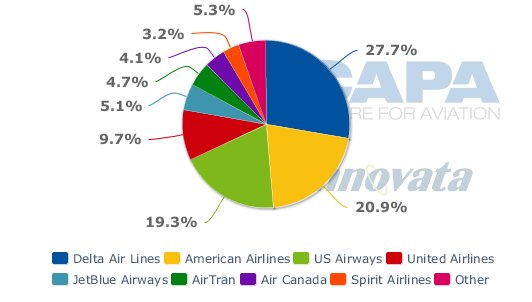 In late 2011 WestJet acquired eight slot pairs at LaGuardia to secure its re-entry into the market. WestJet now accounts for approximately 5200 one-way weekly seats in the Toronto Pearson-LaGuardia market, giving the carrier a 29% share, which is higher than American’s 21% share. Air Canada still accounts for the majority of seats, 8900 or 50%, on the pairing, but WestJet’s share moves to 32% after it adds an eighth daily flight on the pairing from 12-Jul-2012. 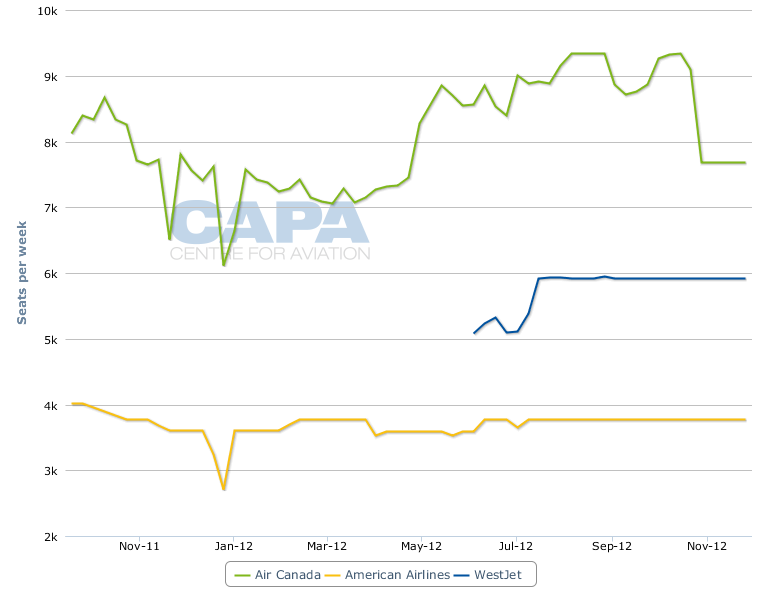 American, Air Canada and Delta offer flights between Toronto and New York JFK, with American representing 38% of the seating capacity, or 1600 weekly one-way seats. Delta accounts for 34% of the seat share or 1500 seats while Air Canada offers 1200 seats, accounting for a 28% share. 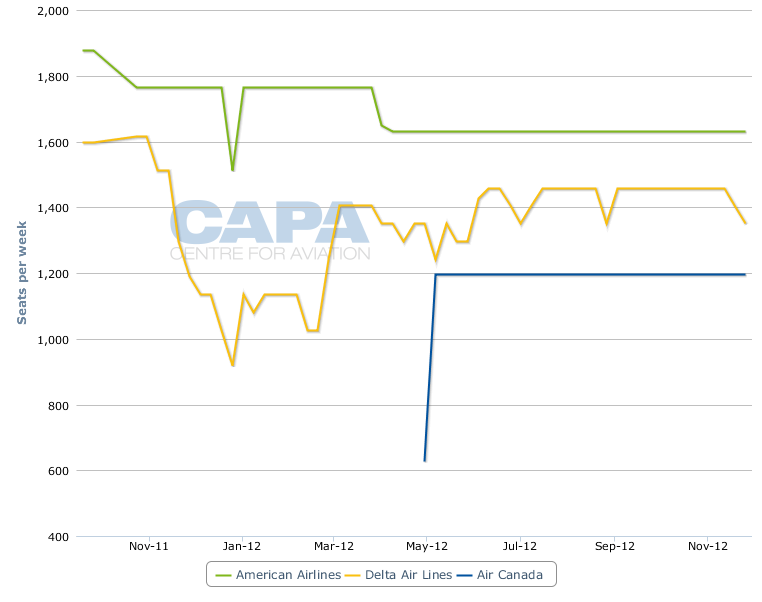 WestJet’s fares are approximately on par with the economy fares charged by its rivals in the New York market for a roundtrip, non-stop flight covering travel from 26-Jun-2012 to 28-Jun-2012. In the LaGuardia market, WestJet is charging USD342.69 while Air Canada’s fare is USD341.82 from both JFK and LaGuardia. Air Canada’s 'Latitude' fares, which are not technically business fares but are refundable, are USD1254.15 from JFK. Only economy and Latitude fares were available for booking on Air Canada’s flights from Toronto to JFK. The carrier’s Executive Class offering during the same travel period from Toronto to LaGuardia is USD1254.15. American’s business fares between Toronto and both JFK and LaGuardia were USD1385.45 and its lowest restricted 'Economy Super Saver' fare from Toronto to both airports is USD343.78.

United does not have a dual-class cabin on it flights from Newark to Toronto during that time period, but its lowest economy fare is USD354.53. Air Canada’s lowest fares on the pairing are USD356.66 while the lowest business class fare, a combination of Executive Class Lowest and Executive Class Flexible is USD2225.01.

WestJet currently offers 1000 weekly one-way seats in the Calgary-Chicago market compared with 2700 from United. The Canadian carrier is offering the same number of seats in the Vancouver-Calgary market while United offers 4400 seats. Using the same 26-Jun-2012 to 28-Jun-2012 travel period, United’s business class fares to Vancouver are USD2579.45 and USD2281.08 to Calgary. United’s economy fares on the Vancouver-Chicago pairing are USD488.58 compared with USD495.38 for WestJet. United’s USD449.29 economy fares in the Calgary market are USD63.37 more than the USD385.91 fare WestJet is charging. 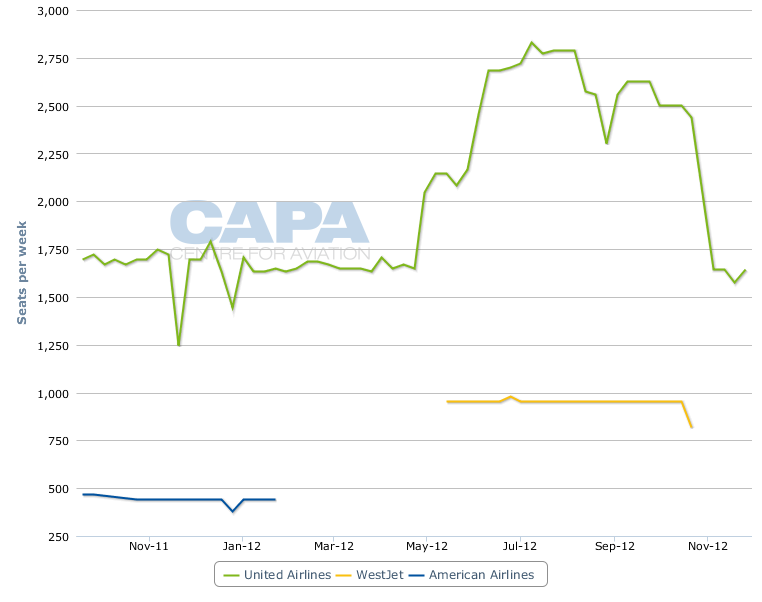 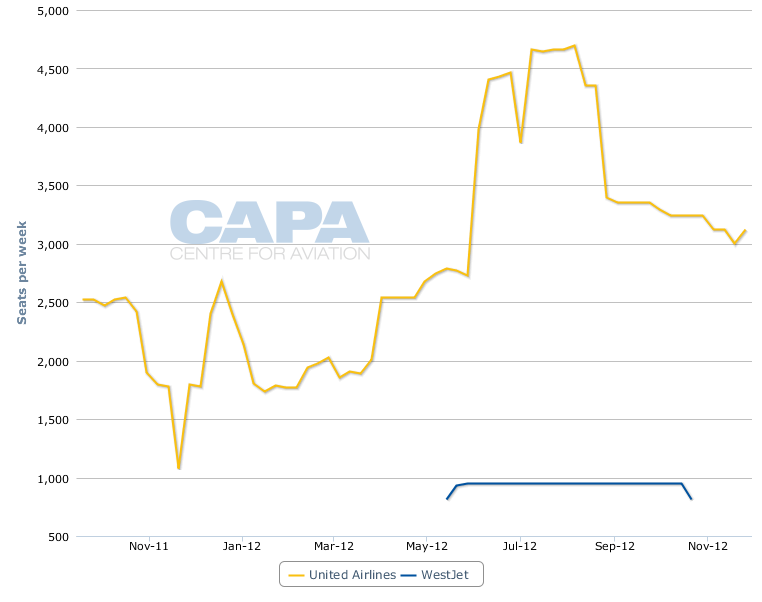 Calgary is WestJet’s headquarters and largest base, where the carrier accounts for 49% of the current seat share. The carrier should not have any problem in seeing adequate demand for its new fights to Chicago. WestJet has the highest seat share in Vancouver behind Air Canada, so its brand awareness in that market is also high enough to garner demand for the new flights. WestJet has been bolstering its loyalty programme during the last couple of years, so it will no doubt offer miles promotions in the new markets. At the time of launch, WestJet offered vacation package specials from Chicago to Vancouver through its WestJet Vacations business, a unit the carrier aims to continue growing. 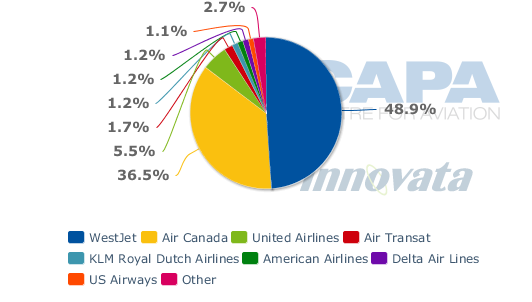 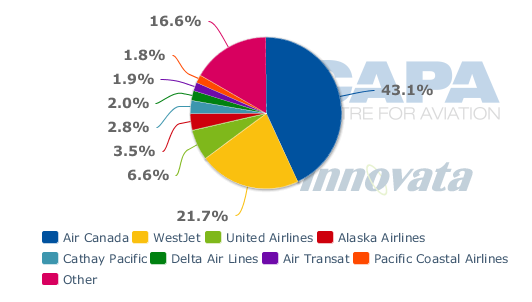 WestJet could get some benefit as it launches its new flights to New York from fallout over work stoppages earlier this year by disgruntled Air Canada employees that disrupted several hundred flights. WestJet already has an established presence in the business traffic-heavy Canadian Eastern Triangle of Toronto-Montreal-Canada, so passengers are familiar with the carrier’s brand and reliability. Previously WestJet CEO Gregg Saretsky stated the carrier has seen some evidence of passengers switching to WestJet after being frustrated by Air Canada’s cancellations, but cautioned it was tough to measure the appreciable increase in passengers. It also remains to be seen if any passengers who switched over will remain with WestJet or return to Air Canada once matters settle down.

For WestJet the new flights to Chicago and New York allow the carrier to further a strategy it has had in place for several years to expand more lucrative corporate revenues. Company executives remarked that during 1Q2012 WestJet’s corporate contracted revenue grew faster than its capacity, and the revenue contribution from corporate accounts likely contributed to the 6% year-over-year unit revenue growth that exceeded analysts expectations. Now the carrier has two strong business markets to tout as it becomes more aggressive in corporate sales.

WestJet has yet to name the smaller communities it intends to serve with its new regional subsidiary, which will operate Bombardier Q400 turboprops from bases in Calgary and Toronto. But early in 2012 Mr Saretsky named several destinations that would fit a typical market profile: Cranbrook, Prince Rupert, Fort Saint John, and Dawson Creek in British Colombia; Lethbridge, Alberta; Brandon and Thompson in Manitoba; Saguenay, Quebec and Sudbury, Sarnia and Timmins in Ontario.

Air Canada currently has monopoly in Lethbridge and Sarina. The other markets are served by either smaller carriers, Air Canada and some smaller operators and in the case of Sudbury and Timmins, Porter Airlines as well.

Brandon has already reportedly coined a song to get WestJet’s attention, and local news reports say that both Brandon and Penticton are readying to make formal presentations to WestJet management to make their case for the carrier’s new service. Brandon is only served by Fairchild Swearingen Metroliner operator Perimeter Airlines, which offers flights to Dauphin and Winnipeg.

Penticton is another market served only by Air Canada with Dash 8-300-operated flights to Vancouver three times daily. The city could be a target for WestJet, where it could easily bring fares down in the market through its lower cost base. Air Canada’s lowest fare for travel between Vancouver and Penticton from 26-Jun-2012 to 28-Jun-2012 is USD304.63.

WestJet has reportedly invited several communities to its Calgary headquarters to make their case for the carrier’s service. The Penticton Western News is reporting its officials are making the trip in late Jun-2012 to meet with WestJet executives.

WestJet is even pressuring Air Canada’s major regional partner Jazz as that carrier for years has been seeking ways to diversify beyond its business from Air Canada. In Apr-2012 WestJet won new charter business from Thomas Cook that was previously handled by Jazz. Thomas Cook ended the five-year agreement with Jazz three years early and handed the business to WestJet, which opted to extend leases on three of its Boeing 737s due to expire in 2013 to accommodate the Thomas Cook business. Jazz during the last two years had operated six 757s on behalf of Thomas Cook.

Air Canada, meanwhile, is looking to establish a low-cost carrier, an ongoing point of discussion. Initial reports indicated Air Canada was interested in a leisure-oriented carrier serving more competitive routes to Europe as well as short-haul markets but a recent report from the Globe and Mail said the carrier was interested in a long-haul subsidiary to serve Asia, a prospect with benefits less evident than a short-haul carrier. Routes to Asia are typically profitable and do not have as large competition. Flight times from Canada to Asia are typically at least 10 hours, a duration that means fixed costs like fuel account for a greater portion of total costs, and therefore there is less opportunity to reduce total costs. The low-cost, long-haul carriers operating in Asia – AirAsia X, Jetstar and Scoot – have found their operating sweet spot under eight hours.

Air Canada would partner, the paper said, with another carrier and a financial investor to keep its stake at 50% to avoid gaining approval from its pilots union for the venture. The proposed LCC was one of several points of contention Air Canada management and pilots have been trying to resolve during the last year as the carrier has had to broker new deals with unionised work groups after those employees agreed to concessions and pension freezes in 2009 to stave off a formal restructuring. Air Canada is now engaged in 90-day arbitration with its pilots and mechanics, baggage handlers and ground workers. If those negotiations fail to produce agreements, the arbitrators will impose either management or labour’s contract as the new collective bargaining agreement.

Whatever the outcome Air Canada’s labour relations will remain severely strained for quite some time after a year of wrestling with its employees to forge contracts that will help to dent its legacy cost structure and return the carrier to profitability. As the animosity festers, WestJet is emerging as Canada’s most financially sound and reliable airline, and it shows no signs of slowing its revenue momentum.