WestJet’s position as an unaligned carrier offering an extensive domestic network and based in a market where a Star Alliance member is the only other possible partner, continues to attract interest from foreign airlines seeking to improve their Canadian presence. CEO Gregg Saretsky yesterday announced the LCC is in discussions with Emirates about a potential agreement as part of its plans to expand its global network.

The announcement comes weeks after Emirates’ unsuccessful attempt at gaining more slots to operate double dailies into Toronto, Calgary and Vancouver. Mr Saretsky said that Emirates is “one of a number of airlines” WestJet is talking to, adding “there’s a list of 70 carriers that have expressed an interest in WestJet”. The Calgary-based LCC has relationships with Cathay Pacific, Air France-KLM, China Airlines, American Airlines and British Airways. WestJet shares strengthened 1.4% yesterday.

Further south in the US, LCCs had a mixed day’s trade despite positive economic news and the S&P500 reaching highs not seen since Sep-2008. The two-year extension of the Bush-era tax cuts will add USD285 billion worth of fiscal stimulus to the US economy in 2011, according to Goldman Sachs. Only Allegiant (+2.1%) managed to gain.

Virgin Blue gained 2.4% as news from the Reserve Bank of Australia meant there would be no change to the discretionary cash flows of Australians. It left interest rates unchanged at 4.75%. The ASX200 rallied 0.8%.

In Europe, the Irish Government announced plans to cut the Irish tourist tax from EUR10 to EUR3, a move Ryanair welcomed. But the LCC described the decision as a “half measure” and will continue to lobby for its scrapping. A Dublin broker expressed surprise shares didn’t fare better on the news. Ryanair was flat for the day.

Norwegian announced it carried 1.1 million passengers in Nov-2010, a 16% year-on-year increase. The Oslo-based LCC, however, continues to feel pressure on the yield front, with yield down 9% to EUR6.28 cents in the month. Norwegian shares fell 5.0%. 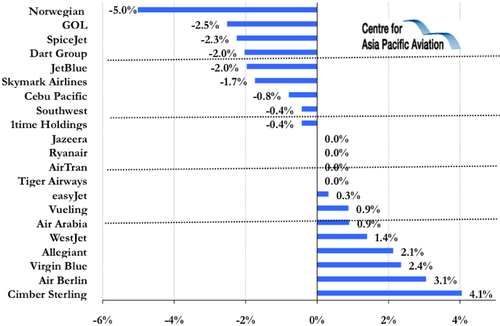