In the Canadian market, shares in Jazz Air, Air Canada-B and WestJet were all weaker, with reductions of 6.3%, 4.4% and 0.1% respectively. Air Canada and WestJet reported their financial results for the three and six months ended 30-Jun-2010, with Jazz Air reporting its results earlier in the weak.

US airline stocks were generally weaker on Thursday, as the wider market declined after a report revealed higher unemployment claims in the week ended 31-Jul-2010.

Republic Airways gained 7.0%, continuing its upward trend, after Avondale Partners upgraded its rating of the carrier from ‘Market Underperform’ to ‘Market Perform’. The analysts also raised its price target for Republic’s shares from USD2 to USD7. 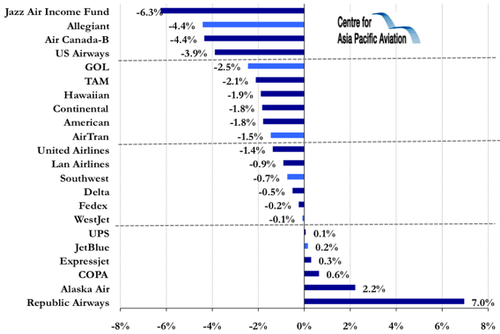