Vueling's May-2010 more than doubles; Ryanair increasing network from Dusseldorf

Shares in Vueling gained 1.7% yesterday, the same day the carrier released its May-2010 traffic results. During the month, the carrier handled 945,000 passengers, a 119% year-on-year increase, with an average load factor of 71.5% (+0.6 ppts). The strong passenger gain was the result of the carrier’s merger with clickair in Jul-2009.

Ryanair increasing network from Dusseldorf - no protest about German tax

Ryanair plans to increase its network from Dusseldorf (Weeze) to 52 routes and more than 3 million passengers p/a. The carrier plans to launch two new routes - to Madrid and Marseille - from Nov-2010, and increase Dusseldorf-Milan Bergamo frequency from daily to 11 times weekly. Ryanair has been strangely silent on Angela Merkel's new German air travel tax. The Dusseldorf expansion would have been planned before the tax announcement, but the timing is not ideal from the point of view of the Ryanair publicity machine, particularly around its pet topics of airport charges and taxation. 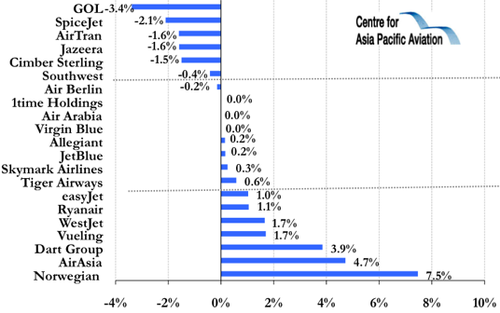