European airline shares declined on Monday (16-Aug-2010) as wider markets ended the day flat. Gains in the mining and retailing sectors offset a fall in banking shares, following disappointing economic data from the US and Japan.

The decline in shares was despite a fifth consecutive day of declines in oil prices (-0.2%), to USD75.24 and improved Premium traffic data. According to IATA, Premium traffic rose 24.2% year-on-year within Europe in Jun-2010.

Vueling and Iberia up on air traffic controllers’ agreement

Vueling (+2.4%) and Iberia (+0.5%) were up on the confirmation Spain's Aena and USCA signed a new collective agreement for the country’s air traffic controllers. The agreement considers the 12 points raised by the air traffic controllers at the commencement of negotiations and fit them into the legal framework established by Law 9 / 2010 and Royal Decree for working conditions, including activity and rest times.

Air Berlin (-0.3%) slipped after pilot union, Cockpit, stated its members plan to launch strike action this month if an agreement is not concluded on wages and benefits, following months of negotiations. 99% of union members at Air Berlin and subsidiary, LTU, gave the union the power to call a strike as early as this week. Pilots are concerned over the airline’s daily changes to schedules and failure to provide a third pilot on long-haul services. The union plans to meet with the airline on 17-Aug-2010 and 18-Aug-2010, as well as in the second week of Sep-2010.

Aer Lingus’ (-3.3%) suffered the day’s biggest decline after senior management condemned cabin crews for voting to reject a vital area of the airline’s turnaround plan the day prior, and praised all staff who have accepted the airline’s cost-savings plans. The airline has told staff that its "greenfield" cost-cutting plan, which aims to reduce annual costs by EUR97 million, will have to be implemented “in full”, as it is “vital” to the viability of the business. Members of the union, Impact, are due to commence industrial action on 25-Aug-2010, when they will revert back to old rosters and ignore any new provisions.

Eurofly (-1.6%) continued to decline, despite news it has launched a codeshare agreement with Olympic Air for select services between Italy and Greece. SAS (-1.5%) also declined after gains the day prior. Norwegian (+2.5%) was the day’s biggest gainer. 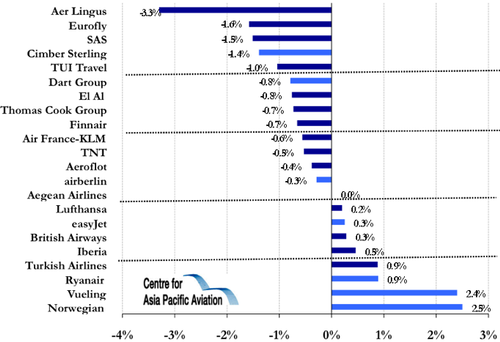