Asian airline shares were mixed again yesterday (22-Jun-09). Shares in Virgin Blue and Kingfisher were down yesterday, by 6.0% and 4.8%, respectively, while Singapore Airlines and Qantas also down, by 2.5% and 1.0%, respectively. Air New Zealand gained 2.2%.

EVA Air’s shares were up 1.2% yesterday, with investors shrugging off dismal May-2009 traffic statistics, which revealed a 10.8% year-on-year reduction in passenger yield and a 0.6% reduction in passenger numbers for the month. Cargo figures were even more concerning, with traffic slipping 16.8% in the month and cargo yields falling by a massive 33.4%. 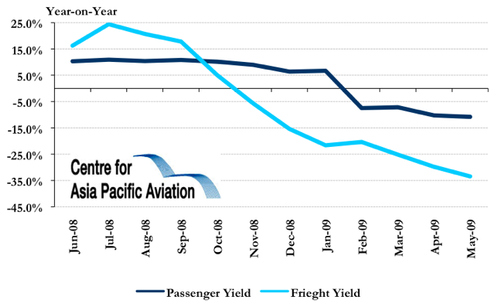 Cathay Pacific’s shares were up by 0.7% yesterday. The Hong-Kong based carrier yesterday presented an investor briefing, in which it stated its Economy class yields remain “weak”, while premium demand has falled 39% in the first five months of 2009. However, the carrier stated passenger yield and demand has "stopped falling, although a recovery has not commenced".

Cathay's cargo prospects are “a little better” than earlier in the year, due to a slight pick up in demand and a reduction in market capacity. In the five months to May-2009, cargo yields were "driven down by competition in a market characterised by continued global weakness" (Cathay’s freight volume fell 16.5% in the five-month period).

Looking forward, Cathay expects an improvement in 2H2009, due a seasonally stronger second half, but it expects continued economic turmoil, with currency fluctuations and rising oil prices a concern and swine flu still a “threat” to the carrier's operations.

The World Bank has meanwhile slashed its global GDP outlook for 2009, from -1.7% to -2.9%, and predicted a contraction in world trade of nearly 10% (the previously forecast from 31-Mar-09 predicted a 6.1% reduction). The World Bank also upwardly revised its oil price prediction for 2009 by 18%, from USD47 to USD55.5/barrel. While Global GDP growth is expected to rebound to 2% in 2010 and 3.2% by 2011, the World Bank has warned that “recovery is expected to be subdued as global demand remains depressed, unemployment remains high, and recession-like conditions continue until 2011”. 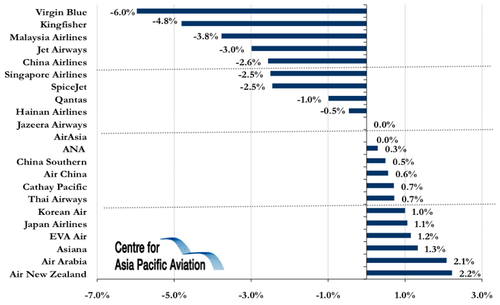