Virgin Blue's shares gained 1.2% yesterday as the carrier’s CEO, Bretty Godfrey, stated improved consumer confidence may lead to fare increases by the end of the year.

Mr Godfrey stated, “the market is starting to turn, and we'll be a major beneficiary. Assuming the momentum we're seeing continues to build, I think we'll see at Christmas time fares start to return, maybe not to prior levels...We're quite buoyant about the next 12 months”.

Similarly, the carrier’s Chairman, Neil Chatfield, stated the carrier is now in a good position to take advantage of market and economic recovery, following a series of early actions and structural and strategic response by the Group.

The carrier yesterday also released its Aug-2009 traffic results, revealing a 1.6% increase in passenger numbers to 1.5 million, driven by 42% jump in international passengers (attributed to the commencement of long-haul V Australia operations earlier this year). Domestic passenger numbers, however, slipped 2.7%. Also in the month, overall load factors slipped 1.2 ppts to 77.8%.

Malaysia Airlines, meanwhile, stated it is seeing a steady pick-up in passenger traffic, stating the market has “rebounded fast” following the global financial downturn, and is now positioning itself to tap into the improving demand through promotional activities.

Philippines Airlines, however, stated it does not expect a recovery in demand until 2010, with the outlook for the remainder of the year looking “extremely” challenging.

President, Jaime Bautista, added the carrier’s 1Q2009-10 operations were “not encouraging”, with the carrier expecting losses again in 2Q2009.

According to Mr Bautista, “the situation we are facing is very serious and your management has taken initiatives to further reduce costs and also increase revenues. We could only hope that there would be some improvement in the outlook for 2010.” 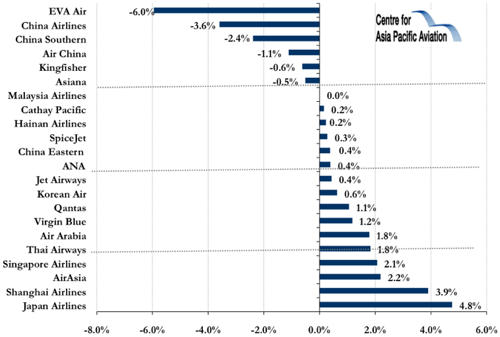