Virgin Atlantic Airways sees more than a little red, but things were much simpler 30 years ago

As Virgin Atlantic Airways nears its 30th birthday in Jun-2014, the simplicity of founder Sir Richard Branson's 1984 vision could not stand in greater contrast to the complexity of today. All he had to do was to use his reputation as a record industry entrepreneur and his marketing flair to lease a 747 and have a go at British Airways. Now, CEO Craig Kreeger's in-tray includes the loss-making Little Red, the developing Delta relationship, the arrival of his first 787 in Sep-2014 and future UK airport capacity.

Top of his agenda is restoring profitability, a target Mr Kreeger set after joining the airline in Feb-2013, aiming to achieve it in two years. Virgin's 2013 annual report, filed with the UK's Companies House in Apr-2014, declared it to be confident of achieving this in 2014 after posting its fourth loss in five years.

More recently Mr Kreeger told The Daily Telegraph (17-May-2014): "The goal was to be above breakeven but, to be quite honest, given the progress we’ve made it will not be a huge amount above breakeven.” Is he having a re-think?

Virgin Atlantic Airways Limited (VAA) reported a pre-exceptional pre-tax loss of GBP74 million for the year ended 31-Dec-2013, according to its 2013 annual report filed at the UK's Companies House. VAA changed its accounting year end from Feb to Dec and so its last two sets of statutory accounts are for the 12 months to Feb-2013 and the 10 months to Dec-2013, but it has provided proforma 12 month figures for the profit and loss account for the calendar years 2012 and 2013.

Note that these results differ from those of Virgin Atlantic Limited, which also includes Virgin Holidays and a brand licensing company in addition to the airline and whose summary results have been the subject of a press release from Virgin. Our analysis focuses solely on the results of Virgin Atlantic Airways Limited.

*Virgin Atlantic changed its financial year end to Dec from Feb with the 2013 results; figures to Dec-2012 are presented on a proforma basis
**based on traffic data from the Civil Aviation Authority. Virgin's 2013 annual report claims load factor of 81.0% and 81.6% for 2012 and 2013 respectively
Source: CAPA - Centre for Aviation, Virgin Atlantic Airways annual accounts, Civil Aviation Authority

Although the 2013 results show that the company is moving in the right direction, it has made losses in four out of the past five years and needs to improve its margins by several percentage points in order to achieve sustainable profits. Operating losses have remained in the region of 3% to 5% of revenues.

The heavy loss in the year to Feb-2010, with an operating margin of -8.6%, was caused by a collapse in revenues. Since then, revenues have returned to growth, but not enough to offset increased costs (with the exception of FY2011, when a small positive margin of 1.2% was achieved).

At the end of Dec-2013, VAA had a net cash balance of GBP242 million, down from GBP354 million at the previous balance sheet date of Feb-2013. Dec is typically the low point of the annual cash cycle and so, to some extent, it is unfair to compare Dec-2013 with Feb-2013, but the company's year-end net cash balance had been declining over the previous three years (with Feb year end dates).

Moreover, if off balance sheet operating leases are included at eight times annual lease rental, the adjusted net debt position was GBP1.6 billion at the end of Dec-2013. With book equity of just GBP39 million, VAA looks under capitalised and the funds invested by 49% shareholder Delta Air Lines went to Singapore Airlines (the previous shareholder).

VAA's Dec-2013 gross cash figure was GBP292 million, equivalent to 41 days of revenues, although the company said that the average 12 month balance was GBP360 million. This compares with an average of GBP445 million for the 12 months to Feb-2013 and GBP529 million for the 12 months to Feb-2012. This represents a fairly rapid cash burn, although this should stabilise if the company can achieve its aim to return to profit in 2014.

VAA's private ownership structure may also ease its access to funds when needed (its balance sheet typically includes around GBP100 million of loans owed to group companies), but a capital injection cannot be ruled out if its return to profit is further delayed.

VAA's 2013 capacity was just below flat

This represents a further improvement, but load factor was still short of the 81.7% reached in the year to Feb-2011. 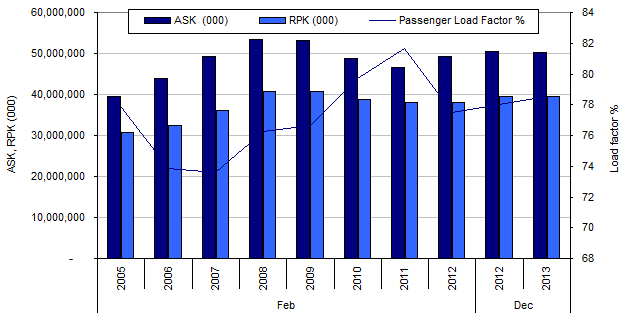 Load factor gains in 2013 are not evenly spread

Load factor is clearly being diluted by Little Red. Excluding the new domestic routes, VAA's long-haul network gained a full percentage point in 2013 to reach 79.0%, but the start-up short-haul network achieved a load factor of only 37.6% for the period from Apr-2013 to Dec-2013. Long-haul ASKs were cut by 1.4% year on year, while RPKs on this core part of VAA's activities were almost flat (-0.2%).

Virgin Atlantic Airways development of passenger traffic by network: 2013 versus 2012

VAA launched routes between London Heathrow and Manchester, Edinburgh and Aberdeen in Apr-2013 using aircraft wet leased from Aer Lingus under the new brand 'Little Red'. Short-haul routes, particularly on feeder routes, often have lower load factors than long-haul point to point, but Little Red has achieved load factors not much more than half of the UK domestic market average.

This highlights the challenge in building volumes on new routes, particularly when there is strong competition (from British Airways and, on a city pair basis to Edinburgh and Aberdeen, from easyJet).

What seems very clear from these load factor data is that VAA must be losing money on its Little Red operation. Indeed, Mr Kreeger has admitted that VAA's 2013 loss would have been lower without Little Red. The airline has no experience of operating on short-haul, but views the routes as having strategic importance in providing some feed to its long-haul operations at Heathrow. Rather than leave BA with a monopoly on these routes, it engaged Aer Lingus, which has a fairly efficient short-haul primary airport operation.

However, VAA has said that Little Red carries a mix of point to point passengers and those transferring onto long-haul flights. VAA's CEO Craig Kreeger recently said (The Daily Telegraph, 17-May-2014) that Little Red is “building steadily” and that he is "extremely comfortable with it", adding: "The rumours of its demise have been greatly exaggerated.”

Nevertheless, with such low load factors and no real strategic interest in the point to point passengers, VAA must surely at least be questioning whether Little Red has a future, or if there might be another solution to the problem of domestic feed.

VAA benefits from a requirement of the European Commission’s approval of the IAG acquisition of bmi that means IAG must offer favourable interline rates to competing airlines at Heathrow. Virgin must think carefully about what Little Red adds in this context.

To some extent, this just reflects the shorter average trip length (which fell by 7.1% as a result of the addition of the short-haul business) and the inverse relationship between unit revenues and trip length.

It is not possible to calculate year on year growth in revenues by region, since VAA has provided a geographic breakdown for the 10 months to Dec-2013 and the 12 months to Feb-2013. Nevertheless, we can analyse these two periods by the percentage share of scheduled revenues in each destination region.

This shows that North America increased its share from 54% to 57%, while Africa's share dropped from 12% to 10%. From this, we can deduce that North America was probably the main driver of revenue growth. The revenue contribution of the UK domestic routes is not known. 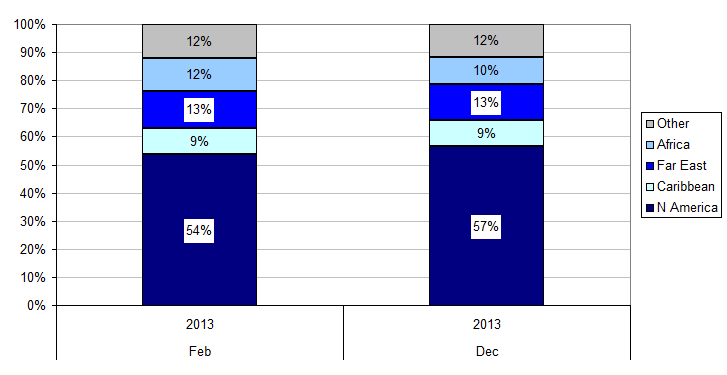 Virgin's operating costs grew by 2.3% in 2013, faster than ASK growth but more slowly than revenue growth. Total costs per ASK (CASK) increased by 2.7%. Fuel costs fell by 3.3%, as a result both of lower fuel prices and also of more fuel efficient A330-300 aircraft entering the fleet, although short-haul operations slightly offset this benefit.

VAA's annual report does not go into the reasons for this increase, but the headcount reduction consisted mainly of ground staff, while flight deck and cabin crew numbers (typically higher paid than ground staff) were more stable. It also seems likely that there were pay increases.

The 2% increase in labour cost per ASK was less than the increase for overall ex fuel CASK. Nevertheless, and although Mr Kreeger has reportedly said that large scale job cuts will not be part of VAA's cost reduction plans, staff costs must be an area for future focus.

In the long-haul markets that dominate VAA's business, it competes with global carriers that have devised highly cost efficient models. Labour productivity is a prime source of cost advantage for Emirates, for example, when compared with carriers such as Virgin and British Airways.

Cost reduction must be top priority

The narrower loss in 2013 was a result of RASK growth outpacing CASK growth, but VAA is still not able to raise RASK sufficiently to generate a profit. It is essentially the world's only significant long-haul point to point carrier and relies heavily on the strength of the London O&D market; but its relatively low load factor and RASK indicates that it is not always easy to replicate this strength of demand at the other end of every route.

It has several codeshare partners that help it to address this issue, in addition to the still new relationship with Delta. It may also consider joining SkyTeam at some stage, although this is certainly not a priority.

VAA's continued difficulty in raising RASK enough to cover its CASK means that the focus must continue to be on cost reduction. Indeed, the company's 2013 annual report refers to "implementing a series of cost efficiency measures" and "delivering savings in fuel and engineering costs" thanks to the A330-300 deployment as replacement for four engined aircraft.

In addition to the ongoing drive to generate more cost savings, there are two other areas, already touched upon in this report, that offer potential for VAA to achieve better profitability. One is to improve the results of its short-haul operation.

Perhaps more recent figures than those published by the CAA indicate that loads are already strengthening. However, based on data to Jan-2014 (as noted above), this activity remains below critical mass in terms of passenger volumes and a capacity cut must be under consideration, among other measures.

But the short-haul network, in spite of all the attention it gets from industry watchers, remains only a small part of the business. In 2013, Little Red was only just over 1% of VAA's total ASKs and will be less than 2% on a full year basis in 2014.

… but the JV with Delta is more important

The second, and much more strategically important, factor is the new joint venture with 49% owner Delta on the North Atlantic. Full commercial cooperation under anti-trust immunity only commenced in Jan-2014. The ability to coordinate schedules and pricing with Delta, in what is effectively a kind of legalised collusion, should be very positive for revenues.

In addition, if VAA can build on the equity relationship between the two airlines to drive cost synergies, this could also be beneficial over time. North America accounted for 57% of VAA's scheduled revenues in 2014 and so every 1 ppt improvement in revenues (or reduction in costs) on this network is a 0.5 ppt gain to its operating margin.

However, VAA needs to find several percentage points of operating margin improvement to be able to generate sustainable profits. Even in fully merged airline companies, synergies of the kind typically claimed by the participants would not be enough to achieve this.

It must keep battling on all fronts, not the least on cost.