Virgin America's powerful market debut. Corporate travel will be a key part of its business model

Virgin America will be well pleased with its timing in accessing the public markets as airline stocks are currying favour with investors after consistent capacity discipline and lower fuel prices have drawn attention to airline stocks, driving up the sector’s performance during CY2014.

The airline is enjoying a trading price well above expectations after recording a profit for 3Q2014 and the 9M ending Sep-2014, setting the stage for its second consecutive year of profitability. Much of Virgin America’s recent financial success rests on capacity reductions and debt restructuring, so arguably the real test of its ability to generate profits is yet to unfold.

Virgin America becomes a newly traded public company at an interesting time in the US airline business as the completion of consolidation among the major airlines creates space for smaller airlines to fill gaps created by those mergers. It is not totally clear how Virgin America intends to position itself in the new environment, but it could scarcely have chosen a better time to be exploring new territory, much of it newly vacated.

Since its market debut on 14-Nov-2014 Virgin America has traded well above the USD21 to USD24 price target. On 18-Nov-2014 the airline’s stock closed at USD37.05. The company netted roughly USD276 million from the IPO, and its market capitalisation stands at nearly USD1.6 billion.

Virgin America is benefitting from airline stocks garnering attention from investors who historically shunned the airline industry due to its chronic unprofitability. But the Chapter 11 reorganisations by all the major US network airlines and the subsequent consolidation has resulted in companies that have the resources to focus on long-term profitability rather than mere survival.

At the same time falling fuel prices – the US Energy Information Administration forecasts retail gasoline prices of USD2.94 per gallon in CY2015 – are also creating an upside for airlines. Nothing however is unidimensional in the arline business; lower fuel prices carry the risk that companies will introduce more capacity into what has recently been a relatively stable market place. Most of the major US airlines are forecasting higher domestic growth year-on-year in CY2015.

Virgin America is also resuming growth during CY2015 after cutting an aircraft order and reworking deliveries that resulted in a 2.2% capacity reduction in CY2013. Its capacity was flat year-on-year for the 9M ending Sep-2014.

The airline projects taking delivery of five Airbus A320 aircraft in CY2015 and a similar amount in CY2016. According to business news outlet The Street.com, Virgin America CEO David Cush recently said that adding the new equipment roughly equates to 10% to 15% capacity growth across 2015. 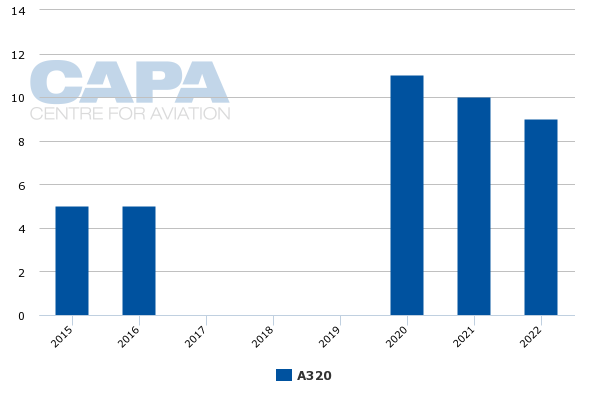 It is not certain how Virgin America intends to carry out that expansion; but it does have a stated goal of increasing its share of corporate travellers. That suggests Virgin America is likely to focus on domestic expansion into markets where it can increase its corporate share.

Virgin America recently stated that it has contractual relationships with more than 250 major corporate customers and travel agents, and during CY2013 corporate travellers booking through a global distribution system generated average fares for the airline that were 65% higher than those booked through other channels.

In CY2013 Virgin America estimates that passengers booking within 14 days of departure represented 30% of its guests in CY2013 and 40% of its revenues.

Mr Cush considers that Virgin America’s planned growth rate for the next couple of years should not be “upsetting to the industry”, and that the company could achieve that growth while maintaining or growing margins, which on an operating basis were nearly 8% for the 9M ending Sep-2014.

That logic seems reasonable given Virgin America represents less than 2% of the US domestic traffic and operates a fleet of 53 aircraft. But Virgin America states that it believes significant opportunities exist to expand from its two largest bases in Los Angeles and San Francisco – areas where legacy airlines are also likely to grow.

American is projecting a 2% to 3% increase in domestic capacity in CY2015, United is planning 0.5% to 1.5% domestic growth and Delta’s consolidated capacity is expected to increase 2%. Alaska Air Group projects capacity expansion of 7% to 8% in CY2015, and Southwest is growing its seats by 3%.

Much of the profitability enjoyed by US airlines in CY2014 has been driven by strong domestic demand; but it is not certain if that strength will continue into CY2015. Some of the current growth projections may be too optimistic, which could create a slight supply imbalance. In that context Virgin America’s growth still may not disrupt the industry, but the airline could face some revenue dilution from its planned supply expansion. 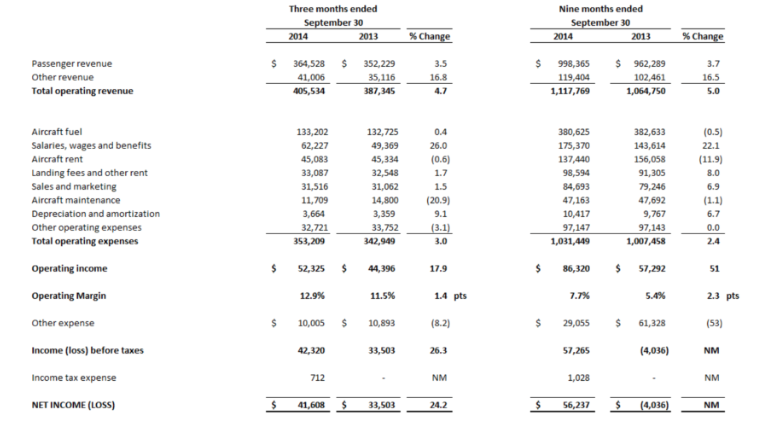 Much of the profitability was driven by a recapitalisation of the airline undertaken in CY2013. Along with restructuring a solid portion of its debt Virgin America also modified its aircraft leasing agreements, which the airline estimates will generate USD47 million in annual rent savings in CY2014. The airline also cut its interest expense by USD30.7 million for the 9M ending Sep-2014 due to its recapitailisation in CY2013.

Even as Virgin America’s turnaround is driven largely by balance sheet restructuring, an argument can be made that the company’s efforts to shore up its financial performance is not markedly different from other airlines that formally restructured through Chapter 11 during the last decade. But Virgin America now has to show that it can in fact generate profits without the benefits of reduced lease expense and debt restructuring. No doubt lower fuel bills will help.

Virgin America did grow yields by 1.2% for the 9M ending Sep-2014 and increased passenger unit revenues by 3.7% Its cost excluding fuel and profit sharing grew 2.4%. 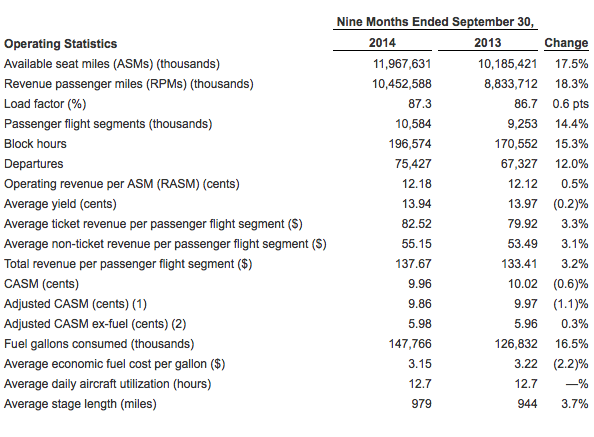 In conjunction with its IPO, Virgin America filed paperwork with US regulators noting that its business model relies on attracting guests that prefer its product offering that entails more frills at a lower costs, and that combination generally requires a longer lead time to attain profitability in its markets. But the company believes in the long term its strategy allows it to achieve a unit revenue premium over low cost airlines. 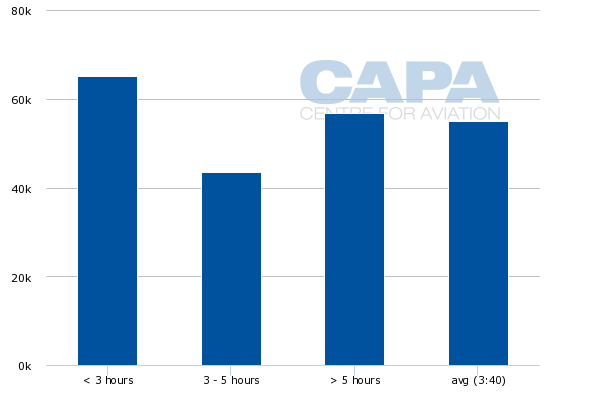 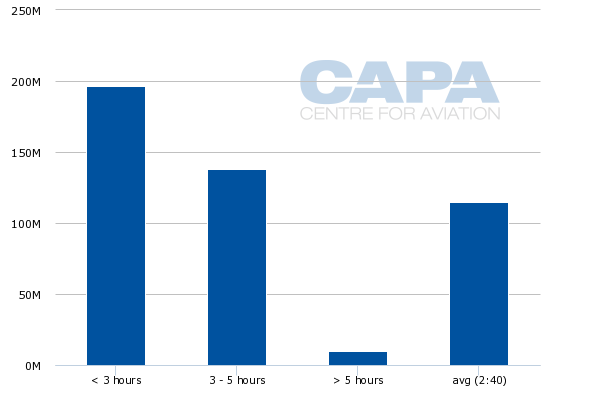 Even as Virgin America believes it will generate a revenue premium over more traditional low cost airlines, its long term viability hinges on growing its unit revenues faster than unit costs, something that did occur in the 9M ending in Sep-2014. Virgin America’s ability to sustain a revenue premium will now depend on how it positions in the marketplace.

Virgin America is seeking different opportunities from consolidation than ULCCs

Virgin America’s comparisons to Spirit are interesting given that Spirit has carved out a distinctive model for itself that rests on offering the lowest fares possible and then charging add-ons for nearly every other aspect of the journey.

Virgin America casts itself as a hybrid airline, and arguably is targeting the same type of customer as JetBlue – high value leisure passengers, those with “mixed wallets” and some level of corporate traveller. 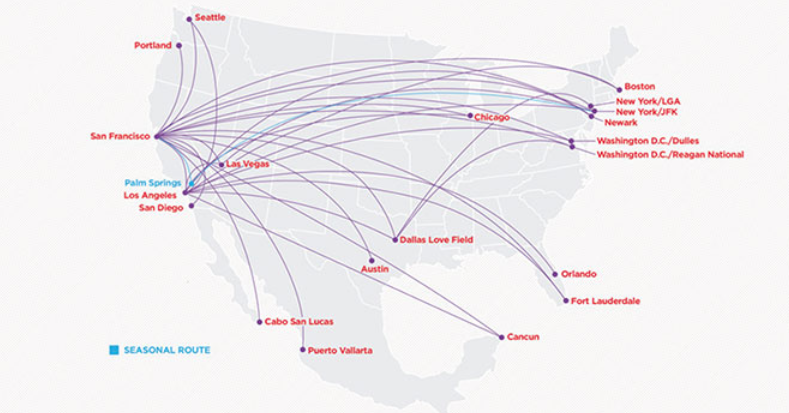 The irony is that Virgin America is enjoying a nice bump in its stock price during early days of trading while JetBlue has spent a good deal of CY2014 defending its model as its performance, in the eyes of some investors, has lagged behind the industry. Investors can be fickle.

Virgin America has already taken advantage of consolidation among the US majors through the acquisition of gates at Dallas Love Field, Washington National and New York LaGuardia airports in its quest to expand its corporate traveller base. Unlike Spirit and Frontier, and to a lesser degree Allegiant, which are looking to fill gaps at hubs downsized by major US airlines as a result of US consolidation, Virgin America is growing in major metro areas, where the rest of the industry also intends to grow.

Virgin America also had to invest in obtaining slots at those airports versus ULCCs getting breaks to launch flights from Cleveland or Cincinnati. Given the level of competition in New York, Washington and Dallas it is tough to predict when Virgin America will recoup its investment.

Virgin America is used to headwinds. The airline has faced significant challenges in executing its model throughout its seven year existence. It launched operations in 2007 just before a worldwide economic downturn and tried to gain leverage during an anaemic recovery.

The company estimates it only serves 15 of the 50 top markets in the US, which leaves some room for growth. Among the top ten US domestic markets by arrivals, Virgin America only serves four – New York, Dallas, Chicago, and Los Angeles.

Virgin America does not shy away from competing with the major airlines; but the key is determining if there are profitable opportunities in those markets, and if it has the wherewithal to survive the competitive response from those larger airlines. It has not pulled out of many markets since its debut in 2007, showing a consistent form; however, it has only been profitable one year of its existence. 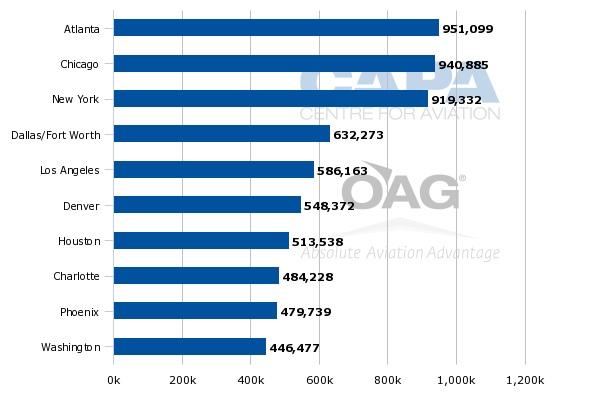 Virgin America resides in that hard-to-define hybrid space that in theory offers improved service for a better value. One of the challenges hybrid airlines that include JetBlue and Alaska Air Group face is the major US airlines are also attempting to position themselves across the customer segments that hybrids are attempting to target. They also have deep pockets and entrenched networks that make cross subsidy possible.

Whether there is a need for three large network airlines, Southwest and three or four hybrid airlines within the US market place remains to be seen. After a period of traffic stagnation there is arguably room for more than diversion, as lower costs allow lower fares. Among the hybrid airlines Alaska has the most staying power from a financial perspective; but faces its own formidable challenges in the form of fierce competition from Delta in  its hub and headquarters of Seattle.

For now Virgin America is off to a flying start as it celebrates a successful debut in the public market. But soon enough the realities of being publicly traded will set in – namely developing a framework and timeframe for shareholder rewards.

Along with that pressure Virgin America faces sustaining its profitability without the help of balance sheet restructuring. It could be a ripe opportunity for Virgin America to finally put the naysayers to rest.