Virgin America is assuring investors that its resumption of double digit capacity growth during 2016 is rational, and will allow the airline to keep costs flat or down, and unit revenue flat or growing. The airline’s ultimate target is a unit cost level excluding fuel that is lower than Southwest Airlines. The airline’s confidence in reaching its cost target is driven by its young fleet, forging favourable fleet financing arrangements and labour productivity.

Although Virgin America has provided guidance of unit revenue contraction in 3Q2015, it was one of the few US airlines to post gains in that metric during 1H2015. The company has concluded that it is shielded from some of the revenue headwinds its legacy competitors face, including foreign currency exposure.

As Virgin America resumes growth it anticipates adding one to two new markets per year, recently citing Sacramento and Denver as holes in its network. Although the airline continues to face pressure in its key transcontinental markets, Virgin America believes it is in a solid overall position to exploit new opportunities in the US market.

Virgin America was one of the few US airlines to actually post unit revenue gains in 1H2015, joining JetBlue in recording an increase. Delta, American, United, Alaska and Southwest all posted decreases in the low to mid single digits.

The ability of Virgin America to attain positive unit revenue growth was against the backdrop of increased competition in its most important transcontinental markets from American, Delta, and JetBlue, which have added a flatbed premium product to their transcontinental flights from New York JFK to San Francisco and Los Angeles – Virgin America’s two largest domestic markets measured by ASMs. 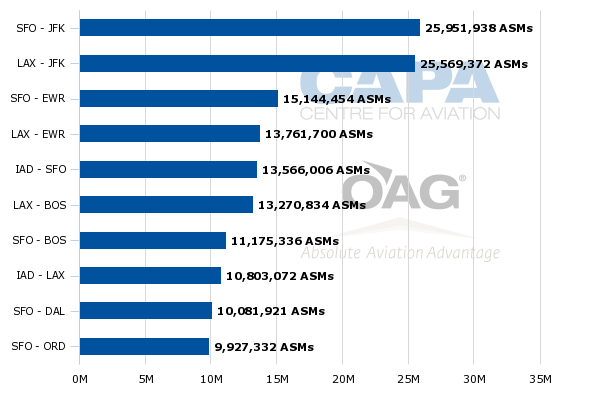 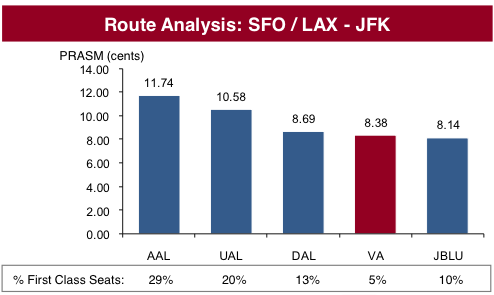 Virgin America views capacity growth from the industry as no problem

Virgin America has previously estimated that its passenger unit revenues should drop between 2% and 4% during 3Q2015, noting that the third quarter is a peak for competitive capacity additions in its markets. The airline has cited capacity growth by Spirit and Frontier in its markets, and pricing actions from Spirit and American. Its forecast drop is still less than the projections of American, United and Delta, which have much more exposure to foreign currency pressure.

In late 2014 Virgin America transferred its existing service from Dallas/Fort Worth to San Francisco and Los Angeles to Dallas Love Field, and expanded its offerings to New York LaGuardia, Washington National and Austin. Southwest Airlines during the last year has also made a huge push from Dallas Love Field after the lifting of the Wright Amendment, creating significant pressure on fares. American has pledged to match the fares of its low cost competitors, which is likely the pressure that Mr Cush was referring to.

In the 2010 and 2011 period industry unit revenue growth settled in the double digits, so extrapolating a 2% industry decline in 2015 as the new normal is not based on facts, said Mr Cush. Even flat industry passenger unit revenues in 2016 show a bit a correction, he stated, adding that he had not seen reckless behaviour by the industry in terms of adding capacity. Mr Cush highlighted that when Virgin America grew its capacity 17% and 29% in 2010 and 2011, its PRASM growth was in the double digits.

While it has taken a breather from its capacity growth over the past couple of years, Virgin America plans 13% to 16% growth in 2016. Mr Cush stated that the airline would grow around 10% for the next number of years. About two thirds of that capacity will be deployed into existing markets and one third to new markets, said Mr Cush, which equated to roughly one to two markets per year. Much of Virgin America’s focus in 2015 and into early 2016 is the launch of new flights from San Francisco to Honolulu and Maui. The airline has started FAA proving runs to gain ETOPs certification for the flights, set to begin in Nov-2015 and Dec-2015.

Although the viability of Virgin America’s Hawaii flights has garnered much attention given the return to overcapacity in the Hawaii-US mainland market, Mr Cush stated that the airline’s expectation is that Hawaii would be a small but important part of its network.

Mr Cush highlighted Sacramento and Denver as two important markets that Virgin America is not yet active in that would enhance its network utility, which indicates where the airline may opt to deploy some of its new aircraft (10 are scheduled for delivery in 2016).

Other markets that Virgin America does not serve from San Francisco include Atlanta, Phoenix, Philadelphia, and Minneapolis.

With the roughly 10% capacity growth rate, Mr Cush concluded that Virgin America could keep its unit cost flat or post decreases, and keep unit revenues flat or record increases in that metric. For 2016 the airline is forecasting a 1% to 2% decline in unit costs excluding fuel. 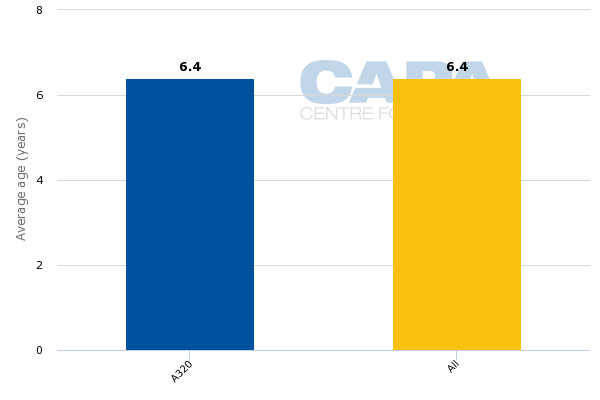 Virgin America views Southwest and JetBlue as its peer set in terms of cost comparisons. Mr Cush maintains it is arguable at the moment whether Virgin America has lower unit costs than JetBlue, and that the airline’s ultimate goal is to drive its unit costs below Southwest.

Virgin America has been profitable in 2013 and 2014, reversing an extended trend of unprofitability. Its unit revenue performance held up during 1H2015, and it is pledging rational capacity growth after hitting a ceiling of 29% in 2011. Virgin America’s planned increases do not appear to have shaken investors as much as Spirit’s average 20% growth during the next few years, but Spirit’s unit revenue declines have been much sharper than the industry average.

There is likely lingering scepticism about Virgin America’s ability to profitably execute its expansion given its target markets are legacy strongholds and where it caters to the same passenger segments as the large three US airline and Southwest and JetBlue.

But Virgin America seems to be offering a clear cut definition of its strategy, and for now is producing solid results. The key now is to sustain the momentum.