The Vietnamese government has estimated that following a rapid pre-pandemic rise in passenger numbers, the requirement for airport infrastructure during the next five years will be twice what it was in the past five years.

Airports Corporation of Vietnam (ACV) reports that VND25 trillion (USD1 billion) has been invested in expanding airport infrastructure over the past five years to support passenger and cargo growth, but that it will need approximately VND120 trillion (USD5.2 billion) from 2021 to 2025 to complete infrastructure projects.

However, there are questions about the selection of infrastructure projects, their geography, and whether traffic forecasts have been exaggerated.

Of greater concern still is the lingering question of where the finance and the operating experience will come from.

Vietnam escalates airport infrastructure investment in the next five-year period

Airports Corporation of Vietnam (ACV) reports that VND25 trillion (USD1 billion) has been invested in expanding airport infrastructure over the past five years to support passenger and cargo growth, but that it will need approximately VND120 trillion (USD5.2 billion) from 2021 to 2025 to complete infrastructure projects.

Vietnam's passenger and cargo traffic increased by an average of 17% and 13% respectively from 2012 to 2019. Airport Council International (ACI) forecasts that Vietnam will be one of ten countries with the fastest development in air passenger numbers from 2018 to 2040.

That development is reflected in the growth of tourism. The chart below details tourism numbers during the most recent five-year period, 2016 – 2021.

In the four years 2016-2019 visitor numbers grew by an average of 22.8%.  The vast majority of tourists in 2019 (56%) came from just two countries – China and South Korea – with only the US and Russia of countries outside Asia Pacific independently managing more than 3% of the total. Not even France, the old colonial power, figures in the chart.

Vietnam is anticipating increases from the countries that are providing the tourist inflows now, but if there is an influx from other countries as well, then the concern over infrastructure is justified. 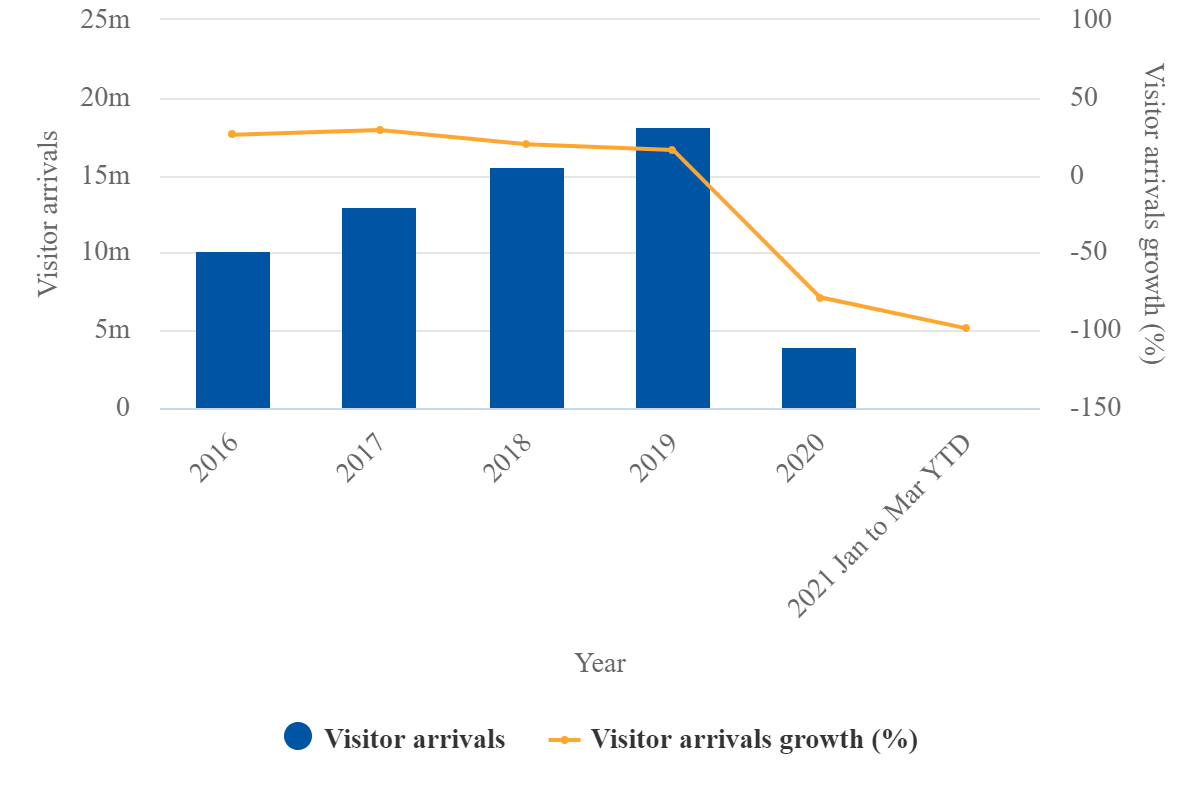 However, also during the past few years the number of passengers carried by Vietnam Airlines has not increased to quite the same degree, falling from +18.6% in 2016 to +0.1% in 2018, and then +4.4.% in 2019, suggesting greater penetration into the market by foreign airlines. 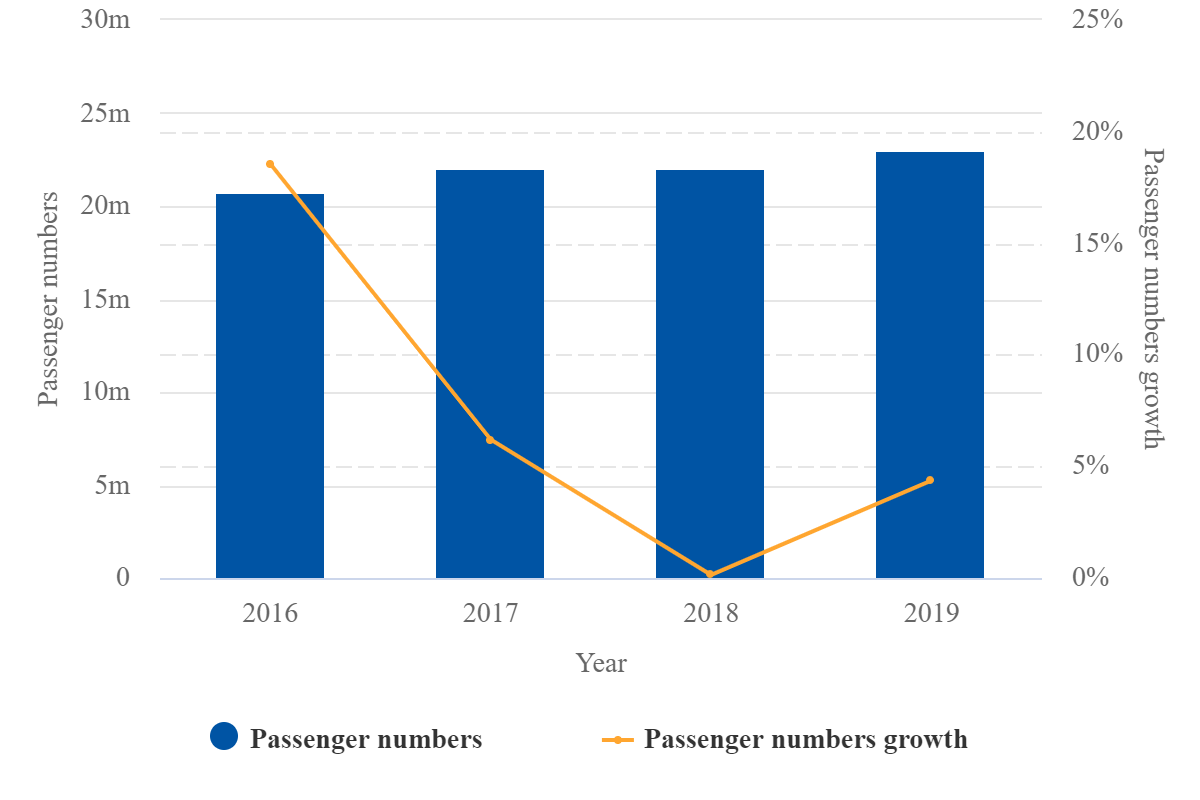 As of the week commencing 26-Apr-2021, 94.2% of international seats are provided by foreign airlines, which is exceptional, even for this region.

Even allowing for these unnatural times and the fact that Vietnam Airlines is slowly reintroducing international services, those statistics are a foundation stone for further airport investment.

Airport construction projects valued at USD9.6 billion, plus USD16 billion for the new one at Ho Chi Minh City

The image below is a snapshot of construction projects in the country at existing airports. The value of those projects, the biggest of which are at the Hanoi and existing Ho Chi Minh City airports, collectively amounts to USD9.6 billion, with completion dates ranging from the end of 2021 through to 2030. 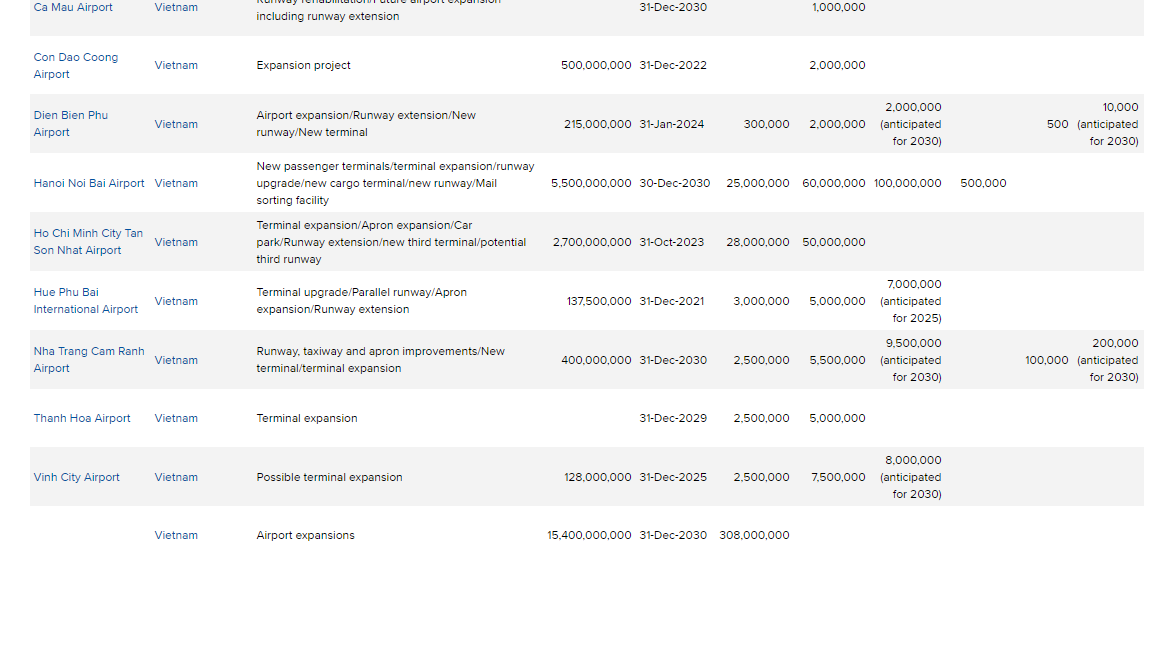 In addition, the 'New Airports under Construction' database for Vietnam lists six entries for the country, including the USD16 billion+ Long Thanh airport at Ho Chi Minh City (see later), for which the individual database entry is shown below. 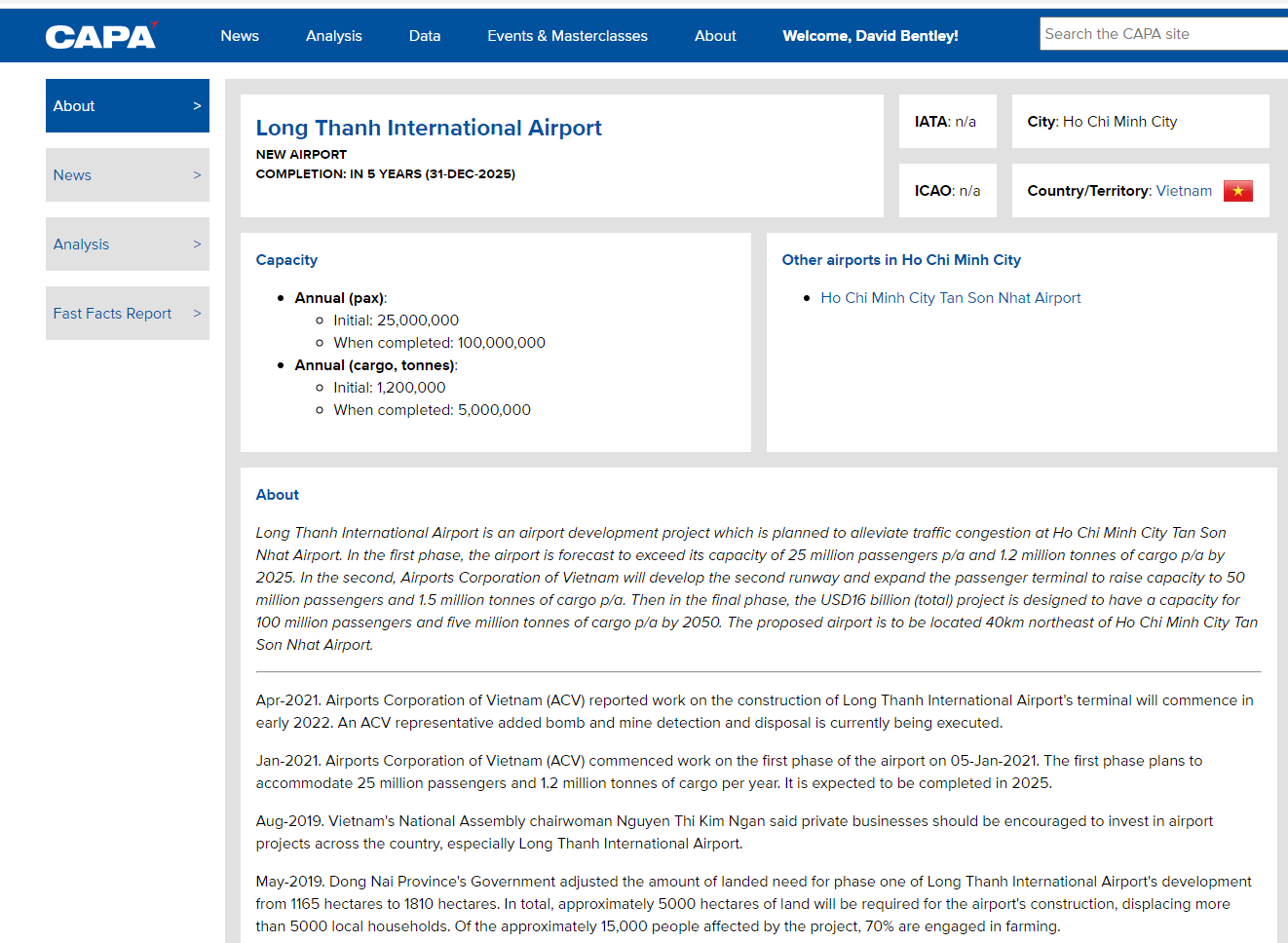 The Long Thanh airport development was reported in Jan-2021.

In summation of this report, it was stated that:

The COVID position in Vietnam remains fairly constant, with the daily active case rate having only exceeded 700 briefly (in Feb-2021); it now stands at 300.

Seat capacity has returned to 82% of the level it was in the same month of 2019. 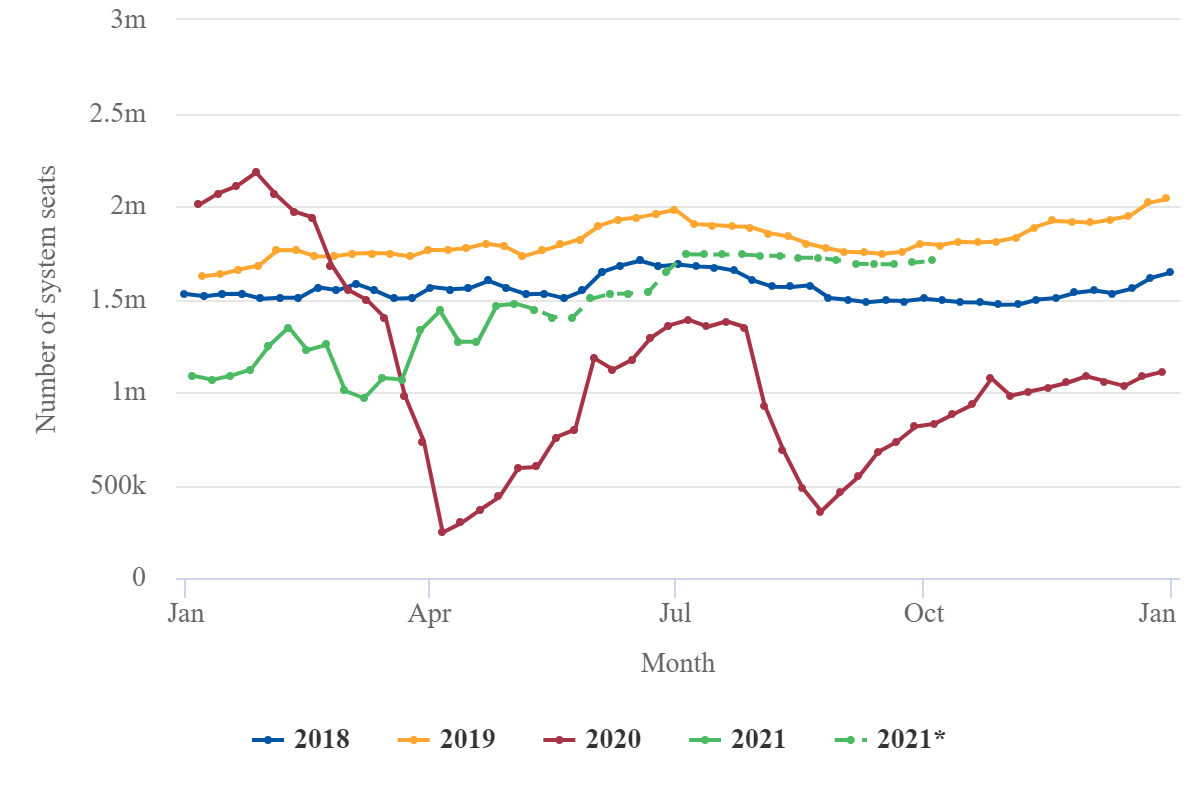 Overlap between Long Thanh and an expanded Tan Son Nhat

Since the report on Long Thanh was published, ACV has said (Apr-2021) that work on the construction of the airport's terminal will begin in early 2022.

The delay is attributed to bomb and mine detection and disposal currently being executed. Work should have begun in Jan-2021.

In its final phase, the USD16 billion project is designed to have a capacity for 100 million passengers and five million tonnes of cargo per annum by 2040. It will be located 40km (25 miles) northeast of Ho Chi Minh City Tan Son Nhat Airport.

Once completed, it will contribute 3% to 5% of Vietnam's gross domestic product (GDP), and is also expected to contribute to the country's socio-economic development and connectivity with other countries.

The project has been a long time reaching this stage. Construction was supposed to start in 2014.

Accordingly, it is perhaps of little surprise to learn that in Mar-2021 ACV said that in Oct-2021 it would begin works to develop Ho Chi Minh City Tan Son Nhat Airport’s Terminal 3.

The terminal will require an estimated investment of VND11 trillion (USD478.3 million) and is expected to be completed within 24 months. T3 will be equipped to accommodate up to 20 million passengers per annum. An overall capacity of 50 mppa is targeted by the end of 2022.

But that means that Ho Chi Minh City would ultimately have the capacity to handle 150 mppa between the two airports, and it is to be wondered where those numbers (similar to Dubai’s ambitions a few years ago) are coming from; especially if the existing airport focuses solely on domestic traffic. Even if Long Thanh is earmarked as an international hub, it would be in very stiff competition with airports such as those at Hong Kong, Singapore and Bangkok.

Just this week, the Philippines' Transportation Secretary reported that the plans to privatise and upgrade Manila Ninoy Aquino International Airport (NAIA) had been cancelled, having faced a multitude of government requirements and political opposition.

Manila is another city in Southeast Asia where CAPA has questioned airport development intentions that do seem a little ambitious, the difference in the Philippines being that the airport projects around Manila are being driven by the private sector.

That is not the case in Vietnam, where attempts to attract foreign private capital and operating expertise to airport projects have not been successful.

That is most notable in the case of Long Thanh. At one stage France’s Groupe ADP was committed to providing USD2 billion in funding through its subsidiary Aéroports de Paris Ingénierie (ADPi).

But eventually Groupe ADP’s interest in Vietnam as a whole diminished, following its failure in 2017 to secure a strategic investor stake in Airports Corporation of Vietnam and its 22 airports across Vietnam. Groupe ADP had looked to tie up a deal with ACV, whereby Groupe ADP would acquire a 7.4% equity stake, later 20%, and make long term investments there.

The government remains keen to attract foreign firms to its airports, or domestic ones if it cannot do that, and often states that publicly. But compared to other infrastructure sectors such as telecommunications and electricity, transport has received very limited private sector participation so far, and is having to start from a very low base position.

A build-operate-transfer PPP model would be tested using Dong Hoi as a pilot project, from 2021 to 2025. A similar model has already been applied to the development of Van Don Quang Ninh International Airport.

Then, in Mar-2021 the MoT specifically called on private investors to develop the Dong Ha (Quang Tri) International Airport, the construction of which had been approved the previous month. The Ministry also proposed that Prime Minister Nguyen Xuan Phuc request that the provincial government prepare a pre-feasibility study to submit to authorities for approval.

The investment and development of the airport project under a PPP format was in line with the government’s previous call on private investors to support the country's transport infrastructure projects. This airport will serve both commercial and military aviation, will have capacity for one million passengers per annum, and will be capable of handling A320/A321 and aircraft of equivalent size.

One of the reasons Vietnam needs foreign private sector assistance is that it has undertaken a glut of self-financed new infrastructure projects, many of which were supported by official development assistance (ODA).

However, as Vietnam approached the per capita income level of a lower middle income country, it reached the position where it could expect significantly fewer soft loans from foreign governments, and it needed to rely much more on private sector participation to execute its infrastructure development programme. And that participation, across all sectors, amounts to at least USD25 billion a year.

Contrast that with what has been referred to by academics as ‘wrong-headed’ projects, planned in near total disregard of the emergence of fast growing industrial clusters.  In other words, some airports are being planned in the wrong places, in areas which do not correlate with commercial development and – even if they did – do not offer land availability to expand the airport.

A good example of the land availability conundrum can in fact be found at Ho Chi Minh City, where there is more than adequate spare land for commercial expansion if the military could be persuaded to vacate all of its 1,000 hectares (out of 1,800 in total) - a common problem, not just for developing nations.

Singapore Changi Airport operates from 1,300 hectares, 500 more than the Tan Son Nhat airport, and has a current capacity in excess of 80 mppa, scalable to 135 mppa. The T3 could easily then be joined by a T4, and potential investors at Long Thanh could not be blamed for seeing a ‘white elephant’ unfolding before them. 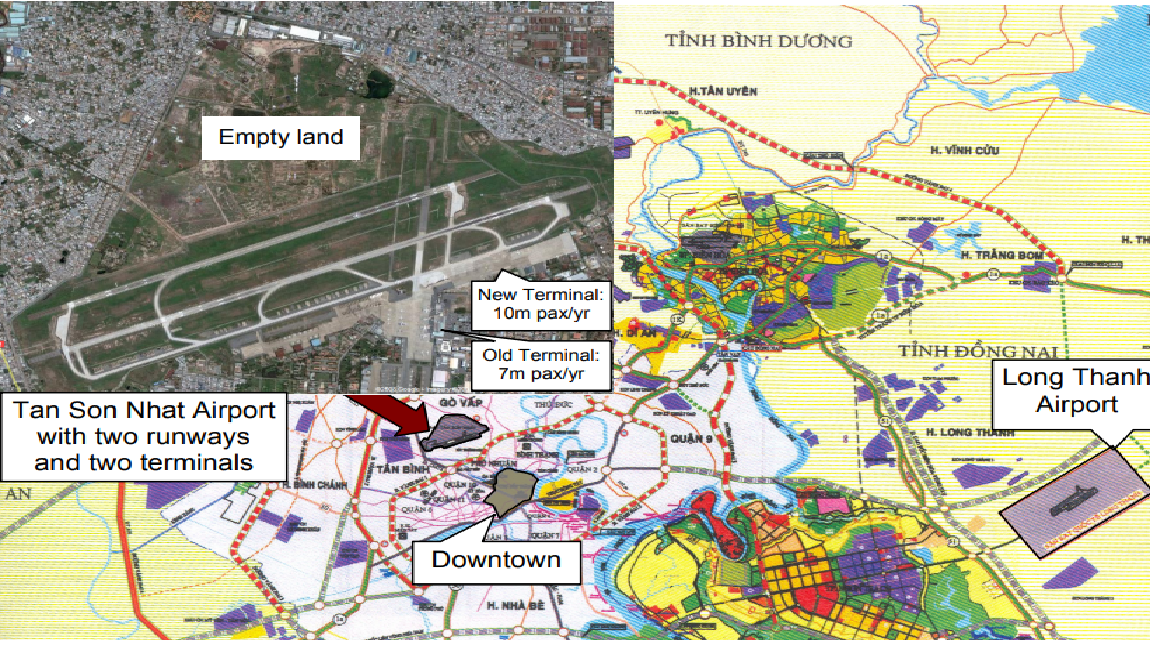 …but the private sector is looking in other directions

None of this would offer any attraction to foreign developers, who would in fact be as interested in the non-aeronautical business prospects at new airports as much as in those on the aviation side.

So which organisations might be attracted to this huge increase in airport infrastructure in Vietnam?

With Groupe ADP having seemingly turned its back on the country, thoughts automatically turn to VINCI Airports, which operates three airports in neighbouring Cambodia through a consortium.

But VINCI has suffered the ignominy of not being asked to bid for a new capital city airport there.

See: New Phnom Penh Airport 'back to the future'

Whatever the rights and wrongs of that decision, VINCI could not be blamed for being wary of the motives of governments in the region while it is expanding its interests in Japan, Europe and Latin America.

Fraport has no interests in Southeast Asia, and AENA has none in Asia Pacific at all, along with Flughafen Zürich and EGIS. Latin American investors do not stray into this territory, where the culture is chalk to their cheese. None of the Canadian pension funds or Australian investors appears to be attracted to the region, and the ambitions of the Indian ones are largely limited to India nowadays.

The options are thus limited. Perhaps Changi Airports International, which at least limits its activities mainly to the region.

The most likely option for the government, though, lies with Vietnam Airlines, which (as revealed in Mar-2021) has committed to invest USD430 million at Long Thanh, having once sought to operate a terminal at Tan Son Nhat.

Ultimately the airline could become, like Qatar Airways, the operator of both the country’s main airport(s), and the flag carrying airline.

But taking on the responsibility for other airports would be too great an ask. That might better be left to VietJet, which has desired to operate terminals at selected airports for several years, no doubt spurred by the success of Bangkok Airways in Thailand.

The Civil Aviation Authority of Vietnam (CAAV) has proposed prioritising the construction and upgrade of international airports over the next 10 years.

CAAV also proposed adding one additional domestic airport in Cao Bang by 2025. By 2030, Vietnam would have 14 international and 14 domestic airports, which would collectively need to accommodate around 278 million passengers per year and around 4.1 million tonnes of cargo per year.