Vietnam Airlines is planning more double digit capacity growth in 2017 and beyond. The airline expects growth to slow in Vietnam’s domestic market, which has doubled in size over the last three years, but it is eager to pursue opportunities in the international market.

In North Asia Vietnam Airlines will expand by upgauging flights from A321s to 787s or A350s, particularly in markets where slot constraints preclude additional frequencies. Vietnam Airlines also plans to expand in Europe by adding frequencies to its four existing destinations, and is preparing to launch services to the US by 2019.

Vietnam Airlines plans to continue operating narrowbody aircraft regionally within Southeast Asia but is able to add short haul capacity by introducing higher capacity A321s. Vietnam Airlines has increased capacity on 10 of its A321ceos by cutting the business class cabin in half, and is planning an even higher density configuration for its A321neos, which will be delivered from 2018.

Vietnam Airlines CEO Duong Tri Thanh discusses preparations for US flights, opportunities to expand in Europe and the performance to date of the A350 and 787 fleet

However, Vietnam Airlines is starting to focus more on international expansion – as are Jetstar Pacific and VietJet.  The domestic growth rate is expected to slow over the next few years as the market matures, leading to an overall slower growth rate for Vietnam.

Vietnam Airlines CEO Duong Tri Thanh told CAPA on the sidelines of the 4-Jun-2017 IATA AGM that the growth rates achieved in 2016 for both the overall market and the airline would be hard to match. “I don’t think we can repeat ourselves at such a high rate”, he said. “There will be a slowdown, but still quite a fast market for us to grow.”

The Vietnam Airlines fleet currently consists of 88 active aircraft, according to the CAPA Fleet Database. In 1H2017 there were two aircraft delivered – one 787-9 and one A350-900.

In the main, Vietnam Airlines is using the expansion of the widebody fleet to upgauge A321 routes. In Mar-2017 it also launched one new long haul route – a thrice weekly flight from Sydney to Hanoi, which supplements its daily Sydney-Ho Chi Minh service.

While Vietnam Airlines does not have any narrowbody aircraft deliveries in 2017, in 2H2017 it will likely take back the two remaining A321ceos that are now leased to its Cambodian joint venture airline, Cambodia Angkor Air. This will result in a slight expansion of Vietnam Airlines’ narrowbody fleet from 57 to 59 A321ceos.

In 2016 Vietnam Airlines took back an initial two A321ceos from Cambodia Angkor Air, which has started taking A320 family aircraft directly from leasing companies. According to the CAPA Fleet Database, Vietnam Airlines has not taken delivery of a new narrowbody aircraft since late 2015, when the last of its A321ceos were delivered.

Vietnam Airlines has focused mainly on widebody deliveries over the past two years. It began taking both the 787 and A350 in mid 2015. Mr Thanh told CAPA that the airline had so far been satisfied with the reliability of both types, and it is now working with Airbus, Boeing and the engine manufacturers on “trying to improve it to an even better level”.

Narrowbody deliveries will resume in 2018 as Vietnam Airlines starts taking delivery of A321neos. Mr Thanh said the airline plans to take 20 A321neos in 2018 and 2019 – with the aircraft being used for a combination of replacements and growth.

As a result, the Vietnam Airlines widebody fleet will increase over the next few years from 26 aircraft currently to 43 aircraft. While it has 27 widebody aircraft on order (including the two A350s slated to be delivered in 2H2017), the airline plans to phase out its A330s over the next two years. As previously mentioned, the last 777 will be phased out imminently.

Mr Thanh said Vietnam Airlines’ fleet plan includes phasing out the last two A330s in 2019, “but if we could do it earlier by some arrangement we will do so”. Vietnam Airlines’ two youngest A330s were delivered in 2011 and are leased from Air Lease, according to the CAPA Fleet Database.

Once the 777 phase-out is completed in a few weeks, the A330 will be Vietnam Airlines’ oldest fleet type, with an average age of more than 10 years.

The airline’s small fleet of ATR 72-500s is the second oldest, and is also in the process of being phased out. The group’s regional subsidiary VASCO will maintain a small ATR 72 fleet and serve four domestic airports that cannot accommodate jets, while the parent airline will become an all jet operator. 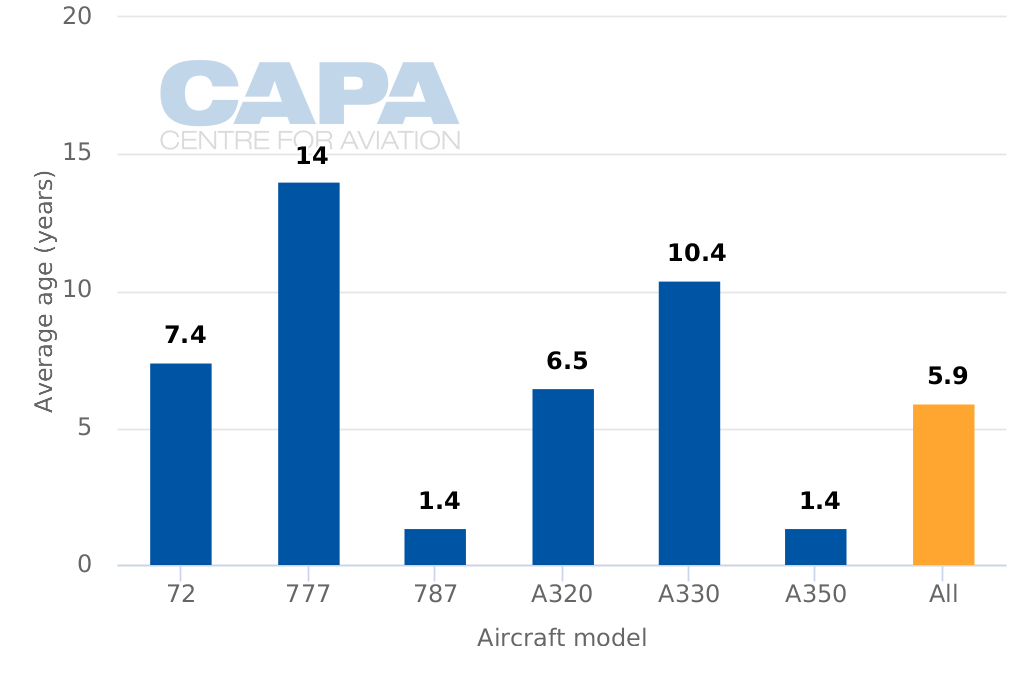 Some of the additional A350s will be used launch flights to Los Angeles. As CAPA has noted previously, Vietnam Airlines has been aiming to launch flights to the US for the past decade, and was finally able to advance these long-held aspirations in Sep-2016, when it placed a new order for the high gross weight variant of the A350-900.

Mr Thanh said Vietnam Airlines has incorporated Ho Chi Minh-Los Angeles in its network plan from late 2018 or 2019. “But still there are a lot of things to be done in the operations and the commercial preparations", he said. “We talk a lot and work with our partners in SkyTeam to figure out what services and operations would be best for us.”

The Civil Aviation Authority of Vietnam also needs to secure a Category 1 rating from the US FAA before Vietnam Airlines is able to seek permission from US authorities. Vietnam has never been assessed by the US FAA previously, but a technical evaluation is scheduled for late Jun-2017.

The expansion of the widebody fleet will also enable Vietnam Airlines to expand its European operation. The airline operates 25 weekly flights to Europe across seven routes, none of which are served daily.

Mr Thanh said a new destination in Europe is possible, but the focus is on consolidating its European operation and adding frequencies on existing routes.

Vietnam Airlines currently serves Frankfurt, London Heathrow and Paris from both Hanoi and Ho Chi Minh. Moscow is served only from Hanoi.

The biggest growth market for Vietnam Airlines will be North Asia. China, Korea and Japan are all fast growing markets from Vietnam.

As slot restrictions at most major North Asia airports prevent the airline from adding frequencies, Vietnam Airlines will add capacity by upgauging existing flights. Over the past year Vietnam Airlines has already upgauged several North Asian flights to A350s and 787s. The expansion of the widebody fleet over the next few years will open up more upgauging opportunities.

North Asia is already Vietnam Airlines’ largest international market, accounting for more than half of its total international capacity. Europe accounts for approximately 7% of its international seat capacity but 24% of ASKs. 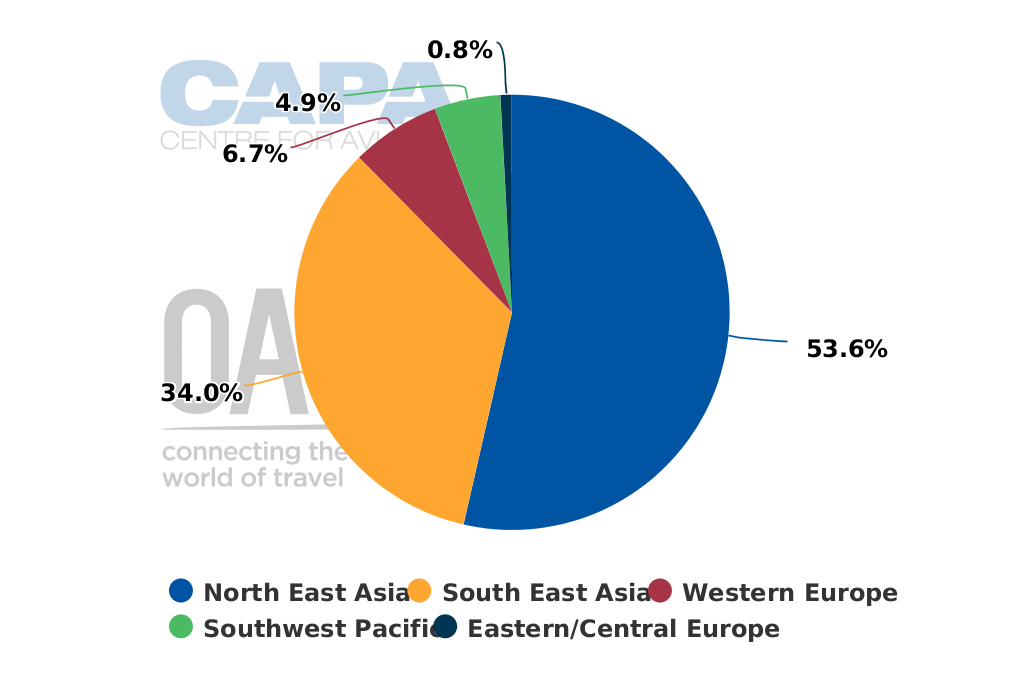 Vietnam Airlines currently has 22 destinations in North Asia, including 12 in mainland China, five in Japan, two in South Korea, two in Taiwan and Hong Kong (based on OAG schedule data for the week commencing 19-Jun-2017). However, several of its Chinese destinations are only served with charters – which mainly operate seasonally from secondary Vietnamese cities.

Secondary North Asia routes – both scheduled services and charters – will continue to be operated with the narrowbody fleet. Vietnam Airlines is considering growing its fleet of higher capacity A321s for these type of routes as they have limited premium demand. Higher capacity A321s are also suitable for the domestic market, with the exception of the core Hanoi-Ho Chi Minh route, where there is more significant premium demand.

Mr Thanh said that Vietnam Airlines had not yet finalised a configuration for its A321neos but he said these aircraft will have at least 200 seats. A business class cabin of eight or 12 seats is under consideration, which will drive a further reduction in premium short haul capacity as the A321ceos being replaced with the A321neos generally have 16 business class seats. Slimmer economy seats will be used to increase density in economy.

Asian airlines have generally shied away from convertible business class configurations due to negative feedback from Asian consumers. Vietnam Airlines recognises it may not be a popular product but has to consider it, particularly on some domestic routes, given the current pressure on yields.

Smaller A320s may be acquired for thinner routes

Mr Thanh said Vietnam Airlines is also considering the acquisition of A320neos for use on its smaller routes. Vietnam Airlines phased out A320ceos and Fokker 70 regional jets in 2014, leaving it without any jets smaller than the A321.

Acquiring a small number of A320neos while further expanding the average seat count on the A321ceos/neos is sensible. This would enable Vietnam Airlines to lower its seat cost on dense and competitive narrowbody routes while using the smaller A320 on thinner routes where there is limited, or no, competition.

Vietnam Airlines is not considering the A321neoLR as it has no aspirations to use narrowbody aircraft on longer routes. It prefers to stick with the A350 and 787 for routes above five hours.

Vietnam Airlines benefits from being in one of the world’s fastest growing markets. However, Vietnam is also a very price sensitive and extremely competitive market. The flag carrier therefore must adapt in order to maintain profitability and a double-digit growth rate.

Ho Chi Minh-Los Angeles may be the only long haul route to be launched over the next three years (and will involve discussions with SkyTeam partners, which should minimise risk).