Jetstar Pacific is resuming expansion as the Vietnamese low-cost carrier enters the international market and grows its A320 fleet. The expansion will see the low profile Jetstar Group affiliate/Vietnam Airlines subsidiary raise its profile and take on its younger and now bigger rival, VietJet Air.

Jetstar Pacific launched services to Macau on 28-Mar-2014, the carrier’s first international destination since it adopted the Jetstar brand in 2008. Jetstar Pacific has largely languished over the last six years, growing its fleet by a paltry one aircraft as other LCCs in the region – including VietJet – have raced past.

The planned expansion of its network and fleet, starting with Macau and the delivery of a sixth A320, will usher in a new era for Jetstar Pacific. There are still opportunities for Jetstar Pacific as Vietnam remains a relatively under-penetrated market. But Jetstar Pacific faces challenges and a potential risk that its expansion could become a case of too little too late.

CAPA will shortly publish a comprehensive report covering Vietnam's aviation and tourism industries. This will include analysis and data relating to Vietnam's airline, airport, tourism and hotel accommodation sectors. For further information about the Vietnam Outlook Report, please contact us.

This is the third and final part of a series of analysis reports on the Vietnamese market.

VietJet has ambitious plans for expanding in the Vietnamese market, with seven aircraft to be added per annum over the next several years including widebodies. The rapid fleet expansion will enable further domestic growth to support VietJet’s aim of capturing a 45% to 50% share of Vietnam’s domestic market along with an international network which could potentially match the current Vietnam Airlines network of 32 destinations within five years.

But the Vietnam Airlines Group is also eager to tap into growing demand for services to, from and within Vietnam by expanding both its main full-service brand and its budget subsidiary.

Vietnam Airlines has owned a majority stake in Jetstar Pacific since early 2012, when it took over a 70% stake previously held by Vietnam’s State Capital Investment Corporation (SCIC). The Australia-based Jetstar Group acquired in 2007 an initial 27% stake in the carrier, then known as Pacific Airlines. The carrier adopted the Jetstar brand in 2008 as it completed a transition to the low-cost model.

The Jetstar Group increased its stake in Jetstar Pacific from 27% to 30% at the same time the majority 70% stake was transferred from SCIC to Vietnam Airlines. The flag carrier is owned by another arm of the Vietnamese Government and is now preparing for partial privatisation with an initial public offering slated for the end of 2Q2014 that could see the government reduce its stake to between 65% and 75%.

Over the past two years Vietnam Airlines has talked about using Jetstar Pacific to meet growing demand at the bottom end of the Vietnamese market following the same dual-brand strategy in place at other Southeast Asian airline groups including Singapore Airlines, Thai Airways and Garuda Indonesia. The Jetstar Group also has repeatedly discussed accelerating expansion at Jetstar Pacific, outlining plans after the 70% stake was transferred to Vietnam Airlines to expand the affiliate’s fleet to 15 aircraft within a few years. But an exact time frame for the expansion was never detailed and until very recently growth remained stalled.

Jetstar Pacific ended 2013 with a fleet of five A320s, matching the number of aircraft it operated under Pacific Airlines, when it had five 737-400s. The carrier added a sixth aircraft in late 2008, its first A320, but was subsequently stuck on a fleet of five 737s and one A320 for two years.

The delays in renewing and expanding the fleet left Jetstar Pacific with an inefficient mix of 737s and A320s for five years, making it a nearly impossible mission to become profitable. A second A320 was added in late 2010 and finally three more A320s were delivered to Jetstar Pacific in 2H2012, enabling the carrier to phase out its last 737 in Jan-2013.

But the transition led to an unexpected reduction in the total fleet size as Jetstar Pacific dropped an initial plan to add a sixth A320 in late 2012 followed by three more A320s in 2013. As a result Jetstar Pacific shrunk in the first year as a Vietnam Airlines subsidiary. 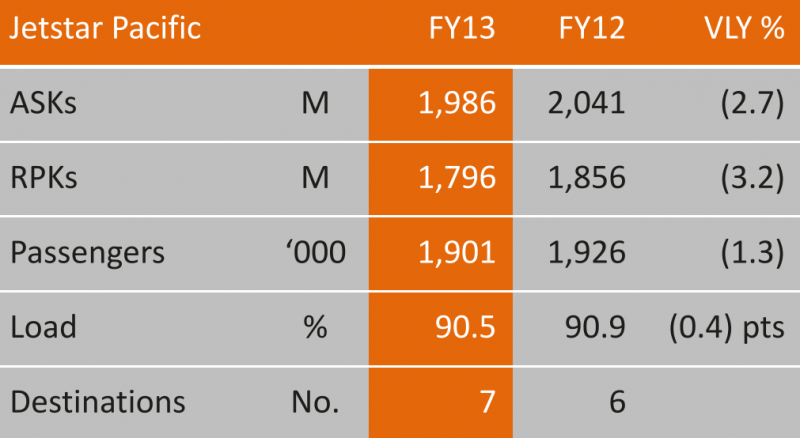 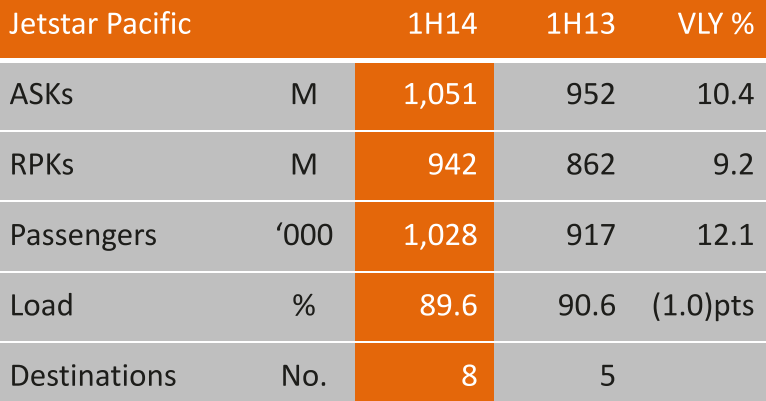 While Jetstar Pacific did not add any aircraft in 2013 utilisation rates improved, allowing the carrier to launch four domestic routes for a total of nine. The Qantas Group also reported at the end of Feb-2014 a 7% reduction in controllable unit costs for Jetstar Pacific for the six months ending 31-Dec-2013 as a result of the transition to a more efficient all-A320 fleet. (Controllable costs exclude fuel, foreign currency exchange and changes in average stage length.)

Despite high load factors Jetstar Pacific has been consistently unprofitable since launching. But the size of the losses are unknown as the Qantas Group does not report financial figures for Jetstar Pacific and Vietnam Airlines has not yet filed a prospectus for its upcoming IPO.

Qantas and the Jetstar Group over the years have pointed to the difficult operating environment and market fundamentals in Vietnam for LCCs, such as fare caps. But several of the barriers have eased over the last couple of years and VietJet has said it was profitable in 2013.

The Qantas Group results presentation for 1HFY2014 stated the LCC business fundamentals at Jetstar Pacific have improved but warned that “challenges remain in [an] increasingly competitive LCC market”. In addition to pointing out the improvement in controllable costs the Qantas Group stated ancillary revenues were up 8% at Jetstar Pacific in 1HFY2014 on a local currency basis.

As Jetstar Pacific grows it should enjoy better economies of scale, pushing down unit costs and closing the gap with VietJet. Jetstar Pacific added a sixth A320 in Jan-2014, giving it the capacity to launch international services. The carrier has said it plans to add another four A320s by the end of 2014, giving it a fleet of 10 aircraft. The original commitment from the shareholders for a 15-aircraft fleet could be met by the end of 2015.

But there should be space for both Jetstar Pacific and VietJet to grow. LCCs currently only account for 40% of seat capacity in the Vietnamese domestic market (includes a 26% share for VietJet and a 14% share for Jetstar Pacific). In Southeast Asia’s five other domestic main markets the LCC penetration rate is between 55% and 77%, according to CAPA and OAG data.

Even if VietJet achieves its domestic market share target of 45% to 50%, Jetstar Pacific should be able to double its share, leaving roughly 25% for Vietnam Airlines. While such a small figure for Vietnam Airlines seems drastic it is in line with most other Southeast Asian flag carriers, particularly flag carriers that have a separate budget brand.

The reality is that budget carriers are generally better positioned to capture growth in Southeast Asia’s domestic markets. Vietnam is no exception as VietJet and Jetstar Pacific are well placed to stimulate demand among the country’s new middle class and expanding first time flyer segment as more Vietnamese trade long bus and train journeys for air travel.

Vietnam Airlines should be able to still retain most of its domestic operation, focusing on premium and connecting passengers, but will inevitably see its market share slip significantly as the total number of domestic passengers continues to increase rapidly. Domestic passenger traffic in Vietnam increased by 19% in 2013 to 14.5 million (based on Vietnamese CAA data), making it one of the world's fastest growing domestic markets. Vietnam Airlines should start using Jetstar Pacific as its brand for domestic expansion, particularly as the LCC increases its scale and lowers its cost base.

There are also opportunities in Vietnam’s international market, which is also the least penetrated among all the main markets in Southeast Asia. LCCs currently account for only 13% of international seat capacity in Vietnam. International passenger traffic in Vietnam increased by 14% in 2013 to 15.1 million, with Vietnamese carriers accounting for 41% or 6.2 million.

The 13% international LCC penetrate rate is particularly a remarkably low figure given that nearly 90% of Vietnam’s international capacity is on routes that are within narrowbody range. 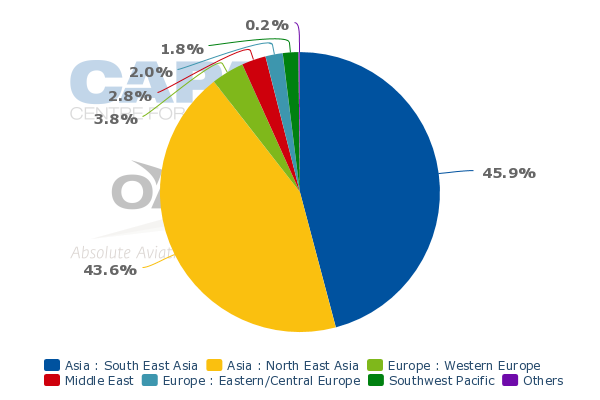 The 28-Mar-2014 launch of services to Macau by Jetstar Pacific gave Vietnam only the 11th and 12th international route with LCC service and the first two routes to North Asia. Jetstar Pacific is initially serving Macau with two daily flights from Ho Chi Minh and one from Hanoi.

Macau is a prime example of a market with significant growth potential from Vietnam with LCC stimulation. It is a strong outbound market for Vietnam as Macau’s casinos are a popular attraction for Vietnamese. There is also inbound demand from Macau and particularly neighbouring China as Vietnam has emerged as a popular tourist destination for mainland Chinese. Jetstar Pacific should also be able to attract some passengers from Hong Kong, which is connected to Macau by ferry, as the Vietnam-Hong Kong market is currently not served by any LCCs.

The Macau-Vietnam market was already served by full-service carriers but on a much more limited basis. There are currently no non-stop flights between Ho Chi Minh and Macau, which is the larger of Jetstar Pacific’s two Macau routes. Air Macau is the only other carrier serving the Hanoi-Macau route, which it currently serves with four weekly flights.

The selection of Macau is also an indication of Jetstar Pacific’s independence.  Typically LCC affiliates look to leverage the group's network and follow a connect the dots strategy when starting to expand internationally, but currently no other Jetstar affiliate serves Macau.

Macau, however, is a proven market for LCCs. Currently nine LCCs serve Macau and account for about one-quarter of Macau’s total seat capacity, according to CAPA and OAG data.

Jetstar Pacific currently serves eight of the 10 largest airports in Vietnam. Dalat and Hue, both of which are served by VietJet and Vietnam Airlines, are the only exceptions and will likely be added as Jetstar Pacific expands its fleet. 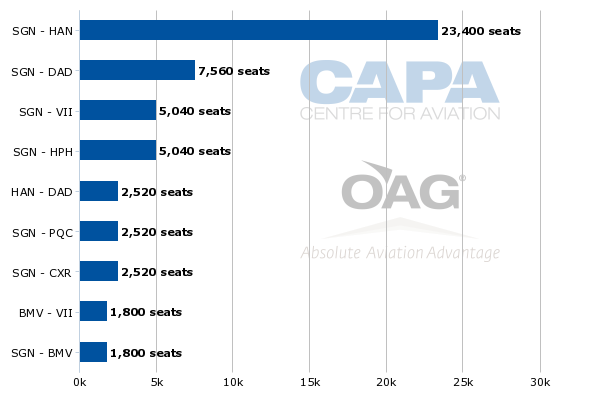 Jetstar Pacific is now evaluating other potential North Asian destinations, including in mainland China. The carrier is also expected to launch international destinations within Southeast Asia with Jakarta and Singapore currently under consideration. Jetstar Pacific has been considering since 2012 taking over some of the flights on the Ho Chi Minh-Singapore route operated by Singapore-based Jetstar Asia.

While VietJet has quickly expanded, there should be plenty of room for two LCCs given the size of Vietnam’s market. There were 30 million passengers in Vietnam in 2013, up 17% over 2012, and high double digit growth is expected to continue for the next several years.

The Vietnamese aviation market is now essentially a duopoly following the failure of Air Mekong, a second private carrier that ceased operations in early 2013. Vietnam Airlines Group should not be complacent but move forward with its strategy to accelerate expansion at Jetstar Pacific, giving it an important counter to the fast-rising VietJet and making it more challenging for a potential new entrant.

Even with rapid expansion for all three brands, the duopoly should ensure a sustainable environment. Other Southeast Asian markets are now generally more competitive than Vietnam.

Vietnam Airlines, Jetstar Pacific and VietJet all have bright outlooks. With the right strategies and execution, all three should be able to thrive and grow rapidly.