Vietnam Airlines has been set back by multiple delays in the Pratt & Whitney PW1100 programme. The airline now expects to receive at most one A321neo in 2018, compared to an original delivery schedule of 10 aircraft.

Vietnam Airlines has been able to continue to expand in 2018 using newly delivered widebody aircraft. A large and increasing portion of its widebody fleet are deployed on regional routes within Asia.

However, its rate of expansion has slowed. Vietnam Airlines will have the opportunity to reaccelerate expansion in 2019 as it catches up with A321neo deliveries and 787-10s start to be delivered.

The A321 is the backbone of the Vietnam Airlines fleet. The airline currently operates 57 A321ceos out of a total fleet of 86 aircraft, according to the CAPA Fleet Database.

Vietnam Airlines took delivery of its last A321ceo in late 2015. The airline has since had limited narrowbody growth.

The PW1100 has since been set back by multiple delays, impacting all Pratt & Whitney-powered A321neo customers. Vietnam Airlines CEO Duong Tri Thanh told CAPA on the sidelines of the 18-Jun-2018 IATA AGM that the first A321neo is now slated to be delivered in Dec-2018, and could potentially be pushed to early 2019.

“With the leased order for 20 A321neos the delivery is rescheduled time and again due to the engine delay. Now we are talking about the first delivery instead of first quarter this year into the very last month of 2018 or even into 2019”, Mr Thanh said. “So it’s almost a one year delay.”

The A321neo delivery delays have created a capacity shortfall, particularly in the domestic market. Vietnam Airlines was initially planning to grow domestic capacity by 13% in 2018, but the airline is now expecting growth of less than 10%.

However, the slower domestic growth is a blessing in disguise as domestic yields have improved. Mr Thanh pointed out that the Vietnam domestic market had become more rationale after several years of rapid expansion due to slower growth by Vietnam Airlines, as well as from Vietnam’s two LCCs. Vietnam Airlines' subsidiary Jetstar Pacific and privately owned VietJet Air have not been pursuing significant domestic expansion this year and have instead been focusing growth on the more attractive international market.

North Asia has particularly been a fast growing market from Vietnam. Mr Thanh noted that traffic from Vietnam to China, Korea and Japan has been growing at an average rate of 25% to 30% so far in 2018.

However, Vietnam Airlines has been growing in the North Asian market at a much slower pace than the market average. While a lack of aircraft has prevented the airline from growing as fast as its competitors, securing slots at North Asian airports is also a challenge. Mr Thanh noted that the LCCs had been adding flights to North Asia in the middle of the night using slots that do not interest Vietnam Airlines, given its full service network model.

Vietnam Airlines will have the opportunity to accelerate expansion in North Asia in 2019 as A321neos and 787-10s are delivered. The 787-10s can be used to upgauge existing flights and make better use of slots at major airports, freeing up narrowbody aircraft for new secondary routes.

Mr Thanh said that the second batch of 10 A321neos, originally slated for delivery in 2019, had not been impacted by the engine related delays. Therefore, Vietnam Airlines – at least for now – is still expecting to receive all 20 A321neos by the end of 2019.

The delivery of up to 20 aircraft in a single year could be challenging. However, Vietnam Airlines has the flexibility to phase out A321ceos in 2019, which would result in a smaller but still significant capacity gain as the A321neos are delivered.

Vietnam Airlines initially earmarked all 20 A321neos as growth aircraft, with the flexibility to pursue a slower rate of expansion by phasing out its oldest A321ceos. Mr Thanh pointed out that the airline’s oldest A321ceos are now almost 15 years old. “We may accelerate the sale of A321ceos”, he said.

The average age of Vietnam Airlines’ A321 fleet is currently slightly over seven years, according to the CAPA Fleet Database. Vietnam Airlines does not currently operate any other members of the A320 family. It phased out its last A320 in 2014 – although the airline is now considering the acquisition of A320neos for thinner short and medium haul routes. 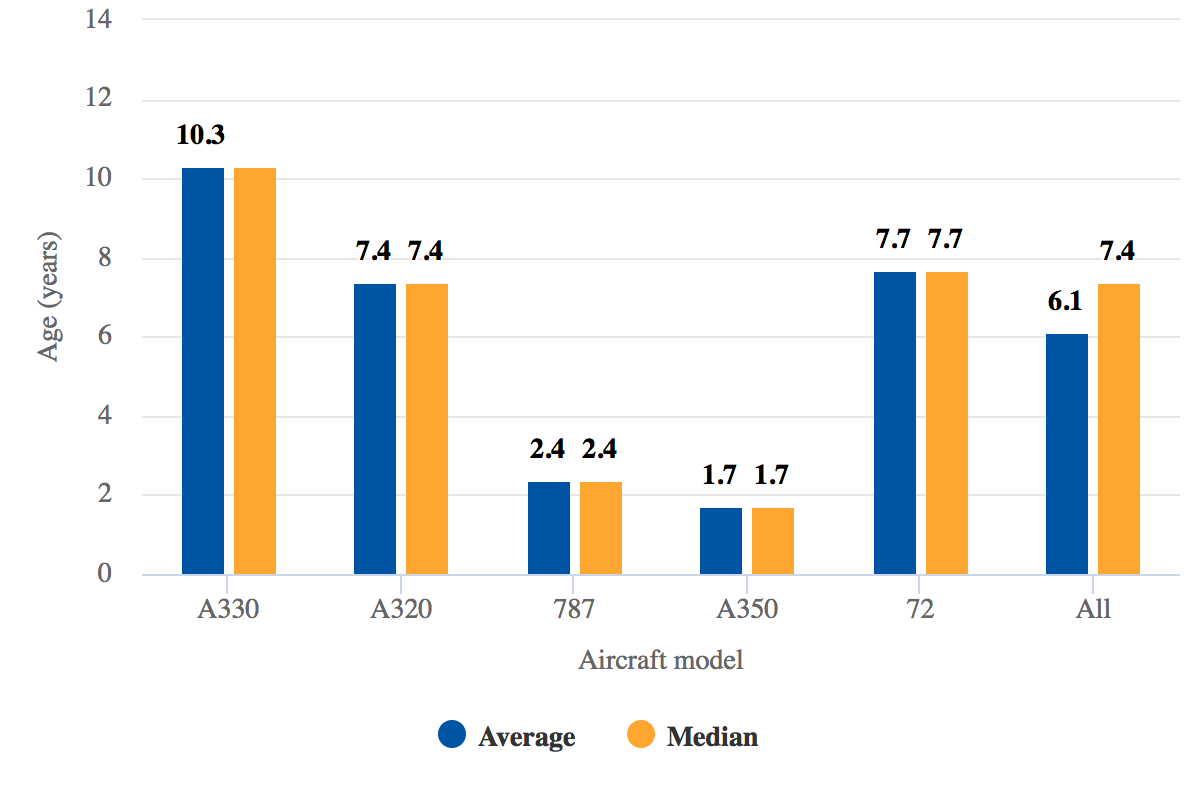 The average age of the total Vietnam Airlines fleet is currently slightly over six years. Vietnam Airlines has reduced the age of the fleet significantly over the past two years as it has taken 23 new generation widebody aircraft (12 A350-900s and 11 787-9s). The airline has two more A350s on order for delivery later this year.

The group is also aiming to phase out its ATR 72 fleet within the next few years. The group currently has eight ATR 72-500s, all of which were manufactured in 2009 and 2010. Some of the ATR 72s are operated by the regional subsidiary VASCO.

As CAPA highlighted in a Feb-2018 analysis report, Vietnam Airlines has been evaluating new generation regional jets to replace the group’s ATR 72 fleet, which is used in smaller domestic markets, and expansion in regional international markets The Bombardier CSeries and Embraer E-Jet families are the main contenders, although the Mitsubishi MRJ and Sukhoi Superjet are also possibilities.

Mr Thanh told CAPA at the IATA AGM that the airline was still evaluating regional jet types and a decision could be made after a wet lease of at least one regional jet type concludes later this year.

Vietnam Airlines has been talking to regional jet manufacturers to assist in arranging the wet lease of at least two aircraft, starting in Jul-2018. However, finding available aircraft and wet lease operators could prove challenging, particularly at such short notice. Unlike the situation with A320s, there is a very limited pool of regional jets in the wet lease market.

The idea of the regional jet wet lease is to provide capacity to compensate partially for A321neo delays while serving as a trial to help in the airline’s evaluation of new aircraft. Mr Thanh noted that wet leasing regional jets is also necessary to provide supplemental capacity because there are no more A320 family aircraft available for wet lease this summer.

“The regional short haul wet lease will give us more flexibility on our shorter routes within Vietnam and free up the A321 capacity for the shortage”, Mr Thanh said. “This is also a test. We are working with all manufacturers to put in the feasibility study, to put into the operational study and into the economics calculations. The wet lease would be some kind of test period for us. It would not be a final decision.”

The introduction of A321neos and 787-10s will also further reduce the average age of the Vietnam Airlines fleet. Vietnam Airlines has commitments for eight 787-10s for delivery from 2019 to 2022.

The Vietnam Airlines widebody fleet will grow to 33 aircraft by the end of 2022 (with all aircraft six years old or younger), compared to 26 aircraft currently. Mr Thanh said the airline is not looking to place orders for more widebody aircraft and believes its current commitments are sufficient.

The seven additional widebody aircraft will mainly be used to upgauge regional flights, particularly to slot-constrained airports in North Asia. Vietnam Airlines is taking a cautious approach to long haul expansion, which is sensible given the intense competition in the long haul market and the rise in oil prices.

Mr Thanh said the airline will particularly focus on expanding in North Asia, responding to rapid demand from China, Hong Kong, Japan, South Korea and Taiwan. North Asian source markets have been the main driver of the rapid growth in Vietnam’s tourism industry.

“Clearly the focus is domestic and Asia”, Mr Thanh said. “Intercontinental routes will be a very challenging exercise for us.”

Vietnam Airlines has been considering the launch of flights to the US, initially as a one-stop service via North Asia. However, intense competition would make such a route challenging, and Mr Thanh points out the recent rise in oil prices makes it “even tougher”.

Vietnam Airlines is open to selling stakes to other airlines, as well as to institutional investors. The group completed a partial IPO in early 2017 with a small listing on the Hanoi Stock Exchange. A planned listing in the larger Ho Chi Minh Stock Exchange has been delayed until late 2018, but the government’s commitment to reduce its stake remains intact. The Vietnamese government currently holds an 86% stake, which it intends to reduce to between 51% and 65% after the Ho Chi Minh listing and potential sale to new strategic or institutional investors.

A relatively conservative strategy focusing on regional and narrowbody growth is likely as private investors take over more board seats. The A321, which now accounts for two thirds of all aircraft at Vietnam Airlines, will continue to be the backbone of the airline’s fleet as deliveries of the delayed A321neo finally begin.