More than 50 airlines are known to have, at one time or another, declared an interest in operating airports or occasionally just investing in them. Of them, 21 are in Asia, and some are actually doing it; for example Japan Airlines, ANA and Bangkok Airways.

Vietnam Airlines has been another of those airlines, along with the country’s second carrier, the LCC VietJet. Now Vietnam Airlines is to invest in the new and expensive airport to serve Ho Chi Minh City, the largest city in Vietnam, and whose existing airport is capacity constrained (although also being expanded).

Since a deal with Groupe ADP fell through in 2017, the necessary private capital and operational expertise to underwrite the explosion of air travel demand in Vietnam has been absent.

These two airlines can go some way to filling that void, but whether they can provide the operational expertise is another matter, and so foreign airport operators should not write off Vietnam as a lost cause yet.

In Feb-2021 Vietnam Airlines chairman Dang Ngoc Hoa reported that the airline was planning to invest approximately VND10 trillion (USD434.3 million) in the Long Thanh International Airport – the new airport being constructed near Ho Chi Minh City, and one of the largest infrastructure projects in the country.

With the airport potentially able to host up to 100 million passengers annually when it is completed, the ground was broken there in Jan-2021, after six years of vacillation on a facility that will cost USD14 billion and which has not (yet) attracted the hoped-for private sector contribution.

The Long Thanh development was reported in detail in Jan-2021.

Mr Dang stated that the company would set aside the resources to participate in the construction and operation of the airport, including providing aviation fuel, ground technical services and duty free sales.

Vietnam Airlines has held a tentative interest in the operation and financing of airports and first came to the attention of the CAPA Global Airport Investors Database (GAID) in 2015, when in March of that year it expressed an interest in purchasing the rights to operate Terminal 1 at Hanoi’s Noi Bai International Airport. At the time, Noi Bai was one of the two largest Vietnam Airlines bases.

The airline remarked at the time, “There has been a popular trend to privatise major terminals at international airports around the world to facilitate the development of major airlines’ firms. This trend is really suitable for the Vietnamese Ministry of Transport’s policies to call for private investment in airport infrastructure. We expect the deals, if successful, will allow us to operate more flexibly, increase services, and reduce costs."

At the time, the observation was made in the CAPA GAID that the bid for the Noi Bai terminal was possibly a defensive measure, to protect the airline's interests at a major hub airport from any adverse influence of foreign investors, which were increasingly finding favour throughout Southeast Asia. Vietnam Airlines was a member of SkyTeam, and already extensively both horizontally and vertically aligned.

Then, in Sep-2015 the Civil Aviation Authority of Vietnam (CAAV) director Lai Xuan Thanh said the airport privatisation process would require intensive planning to avoid monopolisation by airlines or regulatory issues that might threaten the country’s security.

Mr Thanh reported that multiple airlines and private investors, including Vietnam Airlines, had expressed interest in the privatisation of airports generally – not just in the major cities, such as Hanoi and Ho Chi Minh.

Groupe ADP deal put the xenophobia to bed, but then that deal fell through

The issue of security and the need to protect critical infrastructure from foreign ‘penetration’ has arisen in numerous countries in the region, but after 2015 it took a back seat in Vietnam, mainly because of the attempt to secure a deal with Groupe ADP to invest in and improve airports throughout the country.

Groupe ADP is one of the largest French airport operators, responsible inter alia for the Paris airports, which are still partly government-owned, and as such, the group is a representative of what was once the colonial power in Vietnam.

Indeed, Airports Corporation of Vietnam (ACV) signed a strategic agreement with what was then Aéroports de Paris for it to acquire a 20% stake in ACV, which operates 22 airports across Vietnam. Groupe ADP signed a preliminary agreement to take the stake, but the deal was never completed and was terminated in 2017.

Now ACV finds itself in the position of having to attract investors to satisfy the demands of multiple airport projects in a country which had experienced an average rate of growth of 16.5% in seat capacity between 2013 and 2019, and which only fell by 40% in 2020 as Vietnam largely escaped the ravages of the coronavirus pandemic. 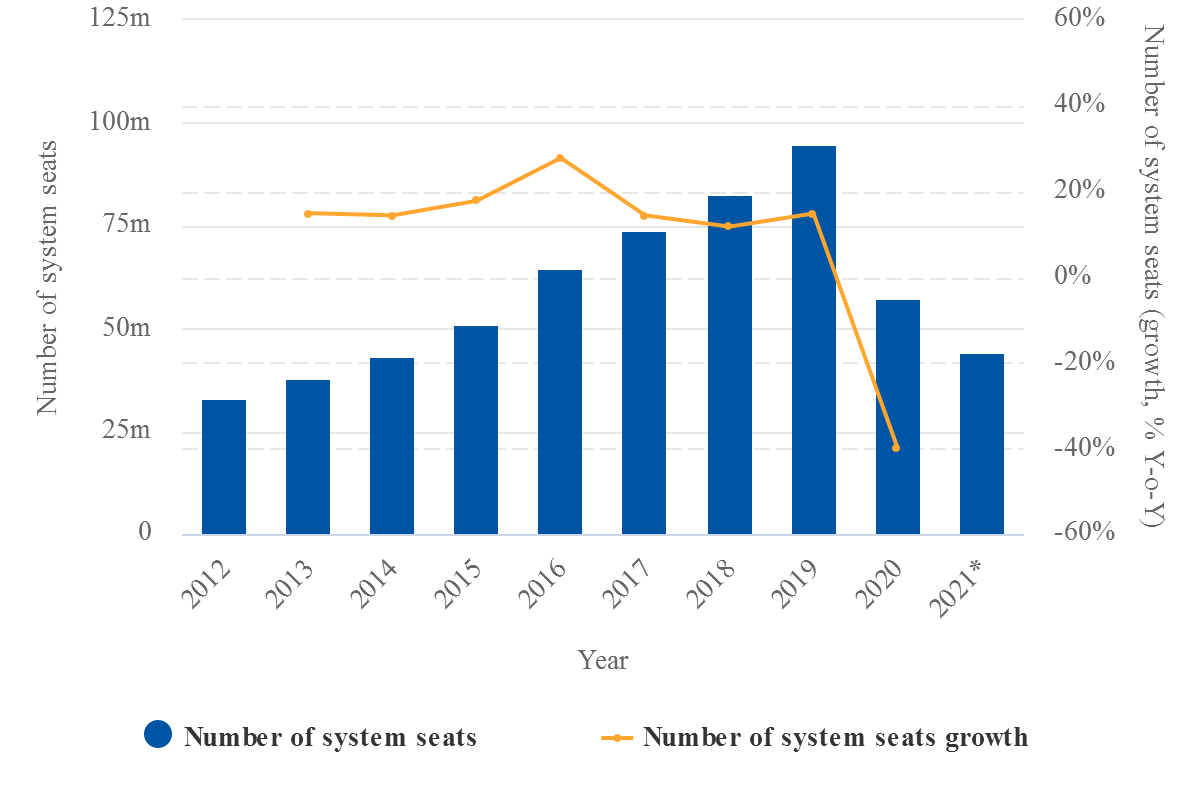 In committing to help build the hugely expensive Long Thanh airport, Vietnam Airlines is putting itself in a position ACV can hardly refuse.

As the previous report said, while the Ministry of Transport had approved the use of public-private partnership (PPP) investment programmes in 2015 and the Ministry of Planning and Investment approved the PPP law, following the pull-out by Groupe ADP none of this actually transpired. The last comment on private sector participation was made in Aug-2019, when Vietnam's National Assembly chairwoman Nguyen Thi Kim Ngan said that private businesses “should be encouraged to invest in airport projects across the country, especially Long Thanh International Airport”.

So Vietnam Airlines ticks many boxes in this respect. While the state remains the majority shareholder, Japan’s ANA airline has had an 8.8% stake since 2016, and the government intends further to divest the state’s holding down to 75%.

ANA is not a foreign airport operator, and is the largest airline by seat capacity in Vietnam (47% of capacity in the week commencing 15-Mar-2021 and 51% at Hanoi’s existing Tan Son Nhat airport). 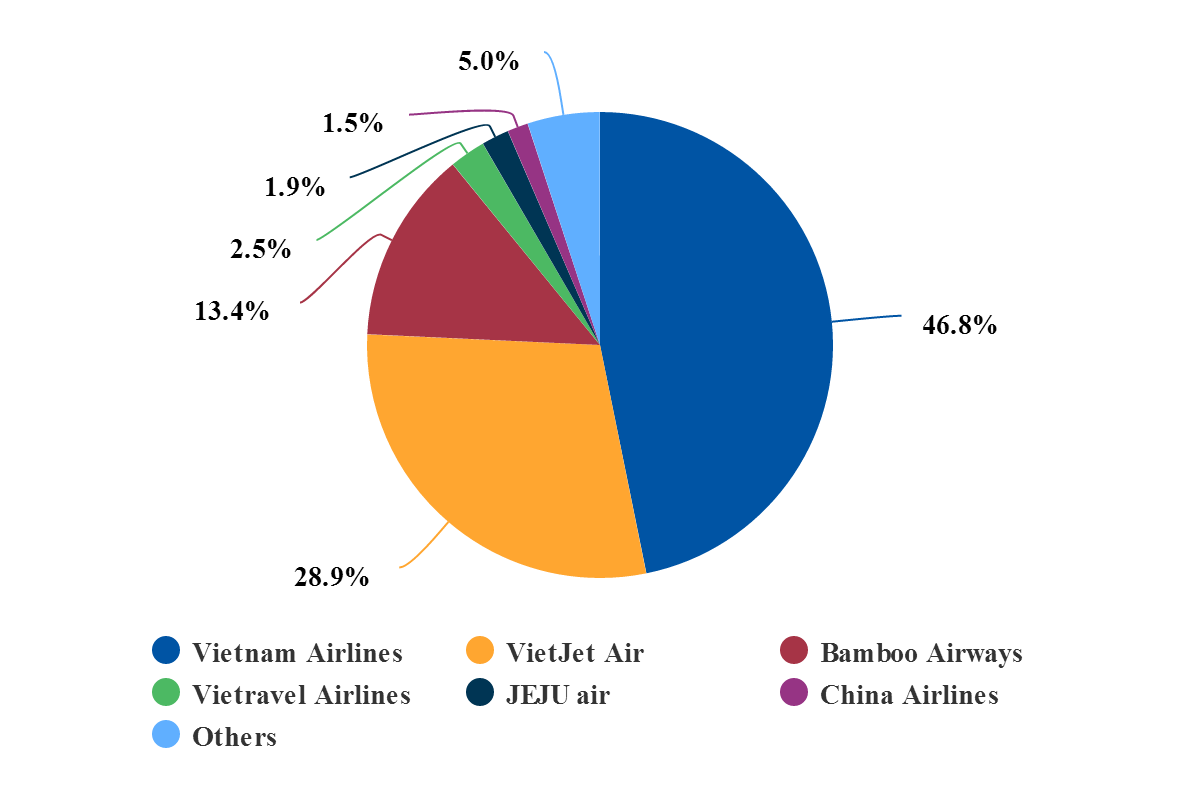 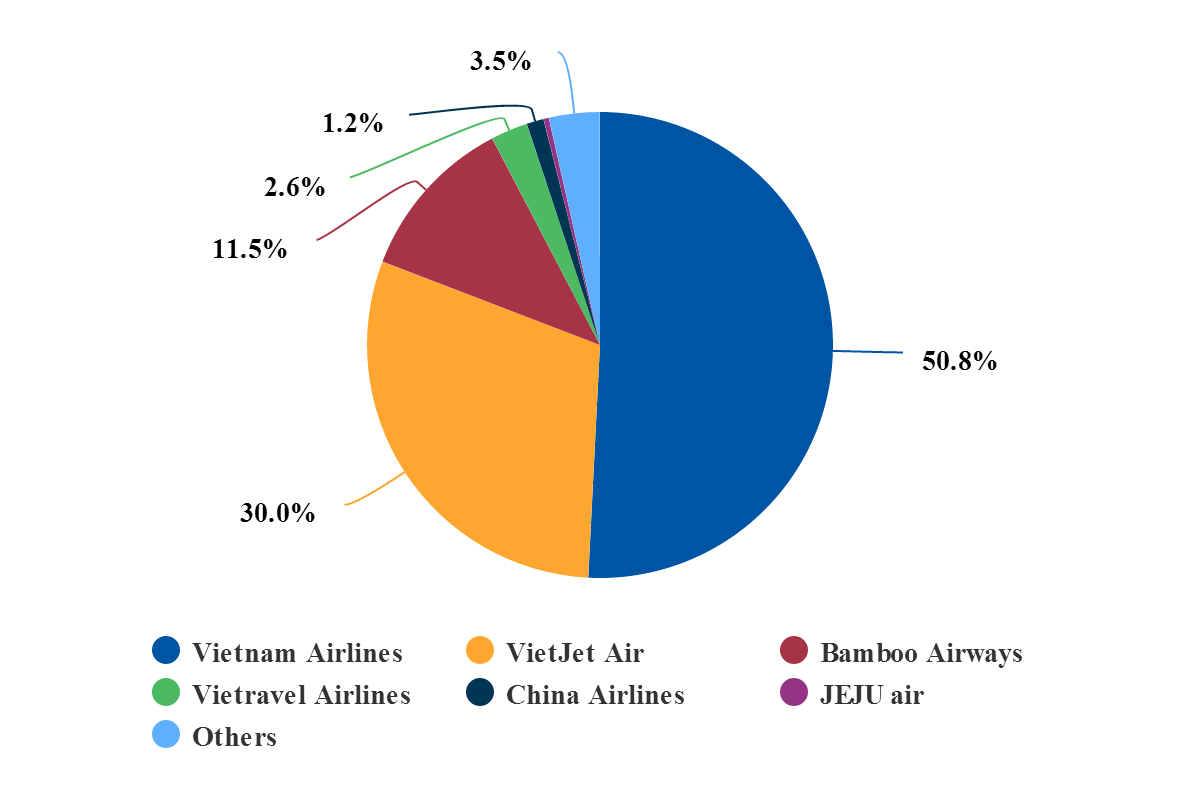 VietJet could also make a reappearance as an airport operator

And now it also needs to be considered what the potential participation in airport operation of Vietnam’s second airline, VietJet Air, will be. The Hanoi-based low cost carrier has also been connected to the prospect of private airport operation since 2015, at the Noi Baht terminal.

VietJet Air had already expressed interest in the proposal, submitting a letter of intent (LoI) to take over T1 operations, subject to the issue of a tender.

Then, in Aug-2015, ACV said that it had received 12 expressions of interest to operate Cam Ranh Airport's international terminal, where the airport authority was seeking a contractor to construct and operate a new terminal capable of accommodating two million passengers per annum.

VietJet Air’s MD Luu Duc Khanh even went so far as to say he hoped that airports in Vietnam would be opened to investment by private companies, as "airlines are the main users of infrastructure at airports and so I hope the policy of granting airport concessions to businesses will be put in place."

Then, in Nov-2015, VietJet Air applied to the Ministry of Transport to operate Phu Quoc International Airport under a 30-year pilot lease agreement.

Since then it has not been heard from, but that could be about to change.

More than 50 airlines have airport interests, or have coveted them

The CAPA Global Infrastructure Database actually holds details of no less than 53 airlines and airline groups that have demonstrated an interest in operating at, and/or investing in, airports at one time or another, or are doing so right now.

They are (Asian airlines highlighted in bold):

In other developments, ACV said in mid Mar-2021 that it was aiming to begin works to develop Ho Chi Minh City’s existing Tan Son Nhat Airport terminal 3 in Oct-2021.

The terminal will require an estimated investment of VND11 trillion (USD478.3 million) – which is a similar figure to Vietnam Airlines’ investment into the new airport – and is expected to be completed within 24 months. T3 will be equipped to accommodate up to 20 million passengers per annum.

So, between the two airports Ho Chi Minh City should be able to handle 150 mppa in the not too distant future, putting it at least on par with much better established aviation cities such as Singapore, Bangkok and Hong Kong.

Whether or not it can become a hub to challenge those airports will be influenced by several factors, including traffic allocation and whether or not there will actually be a need for ‘hub airports’, and what aircraft will exist to service them.

Meanwhile, the Civil Aviation Authority of Vietnam (CAAV) has submitted proposals to the Vietnamese Ministry of Transport (MoT) for public-private-partnership (PPP) airport development and private investment in aviation service facilities at airports managed by the Airports Corporation of Vietnam, as the privatisation pace appears once again to be picking up after the Groupe ADP debacle.

The PPP proposals cover the development of six airports at Dong Hoi, Rach Gia, Ca Mau, Sa Pa, Lai Chau, and Quang Tri. From 2021 t0 2025 a build-operate-transfer model would be tested, using Dong Hoi as a pilot project. A similar model has already been applied to the development of Van Don Quang Ninh International Airport.

In early Feb-2021 the MoT approved the planning of Dong Ha International Airport (Quang Tri Airport) for the period up to 2030. The MoT assigned the Civil Aviation Authority of Vietnam to continue reviewing the planning and oversee technical and economic properties of the construction.

The airport will serve both commercial and military aviation, will have capacity for one million passengers per annum and be capable of handling A320/A321 and aircraft of equivalent size.