VietJet Air plans to pursue significant expansion of its international network over the next few years as the carrier rapidly expands its A320 fleet and looks to launch a widebody operation.

In addition VietJet is pursuing ambitious growth outside its home market: its first overseas joint venture, Thai VietJet, is preparing to launch services in Sep-2014. Thai VietJet will initially operate three A320s while in the Vietnamese market VietJet will add seven A320s in 2014 for a total of 17 aircraft. Both airlines will use the additional capacity to launch a relatively even mix of new domestic and international routes.

VietJet adds its 12th A320 and 15th domestic route

VietJet began operations in Dec-2011 and has quickly grown to become Vietnam’s largest LCC and the country’s second largest carrier after Vietnam Airlines. VietJet on 20-Mar-2014 added its 12th A320 and on 23-Mar-2014 launched its 15th domestic route, Ho Chi Minh to Dalat.

Dalat and Ho Chi Minh were already among VietJet’s 11 domestic destinations. The carrier currently has a about a 26% share of seat capacity in Vietnam’s domestic market, compared to about 60% for Vietnam Airlines and 14% for Jetstar Pacific, according to CAPA and OAG data. Jetstar Pacific, which is 70% owned by Vietnam Airlines and 30% by Australia’s Jetstar Airways, was Vietnam’s first, but now smaller, LCC.

VietJet sees an opportunity to continue expanding domestically, mainly by adding frequencies on existing routes and by connecting the dots between existing destinations. For example VietJet already served two destinations from Dalat and nine domestic destinations from Ho Chi Minh before starting one daily frequency on Dalat-Ho Chi Minh, a route which was previously only served by Vietnam Airlines. Vietnam Airlines’ domestic network currently consists of 21 destinations (according to OAG data) but several of the 10 destinations it exclusively serves are small regional markets served with turboprop aircraft.

As CAPA reported in Dec-2013, VietJet’s business plan envisions further rapid domestic expansion in line with a goal to capture a 45% to 50% share of the market by the end of 2015.

Mr Luu pointed out Vietnam’s domestic market is still relatively under-penetrated by LCCs compared to other Southeast Asian markets. This gives VietJet confidence it can continue to pursue rapid domestic growth while leveraging its position as the country’s largest LCC.

LCCs currently only account for about 40% of domestic capacity in Vietnam. Among Southeast Asia’s five main domestic markets – Indonesia, Thailand, Malaysia, the Philippines and Vietnam (in descending order) – this is by far the lowest figure. The domestic LCC penetration rates in all the other markets are well in excess of 50%.

VietJet lists a network of four international destinations, consisting of Bangkok in Thailand, Kunming in China, Seoul in South Korea and Siem Reap in Cambodia. But it currently only serves one of these destinations, Bangkok, with scheduled services. Bangkok Suvarnabhumi is currently served from both Ho Chi Minh and Hanoi with one daily flight on each route.

VietJet on 26-Mar-2014 announced plans to launch scheduled service betwteen Ho Chi Minh and Singapore on 23-May-2014 . The carrier will initially serve Singapore with one daily flight and is offering promotional fares on the route starting at USD2 (excluding taxes).

Ho Chi Minh-Singapore is a highly competitive route already served by three LCCs – Jetstar Asia, Tigerair Singapore and Lion Air – along with flag carriers Singapore Airlines and Vietnam Airlines. One daily flight will give VietJet only about a 7% share of capacity on the Ho Chi Minh-Singapore route. Following VietJet’s entry Lion will have an 8% share while the four main players – Jetstar Asia, Tigerair, Singapore Airlines and Vietnam Airlines – will all have roughly equal shares of 21% to 22%. 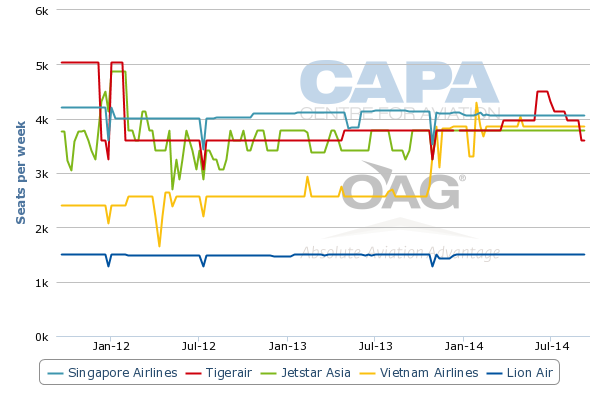 The Ho Chi Minh-Singapore market could prove to be challenging for VietJet given that LCCs already account for over 50% of capacity on the route. But it is a critical addition to VietJet’s network as Singapore is the largest international destination from Ho Chi Minh based on current seat capacity.

Singapore has been in the business plan for VietJet for over a year and was originally expected to be launched in Jun-2013. Seoul and Taipei were also initially planned for 2013.

While VietJet has been slow in pursuing international exposure since launching Bangkok in Feb-2013 (as it instead focused on further domestic expansion), it is keen to now turn its attention more to developing internationally. With seven A320s slated to come into VietJet’s fleet in 2014 (excludes the three aircraft for Thai VietJet), the carrier has the capacity to expand both domestically and internationally.

Mr Luu told the CAPA Summit that VietJet is aiming to launch routes in 2014 to mainland China and Hong Kong as well as Singapore. He says within two to three years VietJet aims to serve most major destinations in Asia using its A320 fleet. Southeast Asia destinations including Kuala Lumpur, Jakarta and Yangon will be served primarily from Ho Chi Minh while North Asian destinations will be served mainly from Hanoi.

There are now only four international markets from Vietnam with LCC service – Bangkok, Singapore, Kuala Lumpur and Manila.

This suggests there is a remarkable potential for LCC growth in the Vietnamese international market, particularly to North Asia as virtually all of North Asia is within narrowbody range of Vietnam.

VietJet and its smaller rival Jetstar Pacific are both keen to become the first LCC linking Vietnam with North Asia.

VietJet is also keen to become the first LCC linking Vietnam with markets beyond Asia, including Australia, Europe and North America.

Mr Luu told the CAPA Summit that VietJet is currently considering widebody aircraft, which would be used to launch a long-haul operation. He said destinations in Australia, Russia, Western Europe and North America are in the business plan and should be added within the next three years.

Airbus and Boeing have both made widebody proposals to VietJet along with leasing companies. VietJet would most likely start with leased widebody aircraft, with deliveries beginning as early as 2015. The carrier plans to make an initial widebody commitment or acquisition by the end of 2014.

The addition of VietJet would mean all six of the largest markets in Southeast Asia would have locally established long-haul LCCs.

VietJet sees an opportunity to tap into growing inbound tourism demand as well as the visiting friends and relatives (VFR) sector. With the latter, VietJet would target the large Vietnamese population living overseas, particularly in Australia, the US and Europe, following the strategy used by Cebu Pacific’s new long-haul operation in targeting the expatriate Filipino population. Mr Luu says with long-haul services catering to the Vietnamese expatriate population VietJet aims to “maximise our brand value and passenger loyalty”.

Russia is also a target market for the new long-haul operation but would be pursued more in response to surging inbound demand. China and Russia are the two big growth markets for Vietnam’s tourism sector. With China VietJet can use its existing A320 fleet.

VietJet has the order book to expand rapidly

VietJet in Feb-2014 finalised an order for 62 A320s, including 20 existing generation aircraft A320 family aircraft and 42 A320neos. The order converted a high profile MOU that was initially signed at Paris in Sep-2013 in front of the presidents of France and Vietnam.

Overall the VietJet fleet is expected to double in 2014 from 10 to 20 aircraft, including three A320s for Thai VietJet. VietJet now expects its Thai joint venture to launch in Sep-2014 and operate three aircraft by year-end on five routes, two or three domestic routes along with two or three international routes.

Mr Luu says the group envisions expanding its A320 fleet in subsequent years by 12 aircraft per annum with seven aircraft allocated to its original operation in Vietnam and five aircraft for overseas joint ventures. VietJet has been exploring joint venture opportunities in other Asian markets to follow its Thailand project, including Myanmar and South Korea. 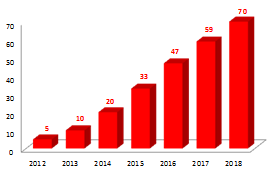 The rapid fleet and network expansion could be partially financed through proceeds raised from an initial public offering (IPO). Mr Luu says VietJet is aiming to pursue an initial IPO in 2015. He pointed out the carrier is already profitable with an operating profit or EBITA of VND268 billion (USD 13 million) in 2013.

So far this year VietJet’s profit has been even more impressive with an EBITA of VDN223 billion (USD11 million) in the first two months of 2014. 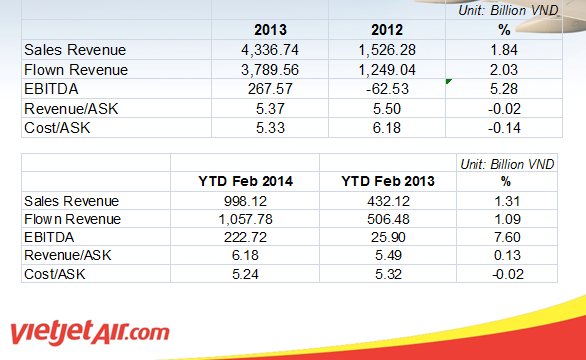 VietJet has a bright future in a market quickly becoming crowded; hybridising is one response

VietJet is also hybridising, adopting what it calls a “new age carrier” model. The carrier plans to soon launch a business product, SkyBoss, and an in-flight entertainment option which will be sold as an ancillary.

The hybrid model should particularly help VietJet as it expands into long-haul operations. Vietnam is keen to exploit its geographic position, which is strategically well positioned between Southeast and Northeast Asia, and become a transit hub. As it grows its network VietJet could potentially develop a transit product, offering connections between Northeast and Southeast Asia as well as to Australia, Europe and North America.

But the implementation of VietJet’s ambitious expansion plan will have its challenges.  Vietnam Airlines is also planning to start pursuing long-haul expansion in 2015 and 2016 as it takes delivery of new generation widebody aircraft. The Gulf carriers have started expanding in Vietnam and will likely add significant capacity to the market in the coming years as Vietnam is still relatively under-served by them compared to other Asian markets.

Vietnam, with its population of 90 million, has tremendous opportunities as it continues its emergence as one of the world’s fastest growing markets. VietJet is confident it can build on its leading position in Vietnam’s still relatively undeveloped LCC sector. But competition will be fierce as VietJet will not be the only player pursuing rapid expansion in Vietnam and the broader Southeast Asian market.

This is the first in a series of analysis reports on the Vietnamese market. The next instalment will review Vietnam Airlines' outlook, including the flag carrier’s plans for an IPO and long-haul expansion following the delivery of 787s and A350s.