Vienna and Copenhagen Airport up, Macquarie Airports and Aeroports de Paris falls back

Airport shares worldwide were generally mixed at the end of last week with Copenhagen Airport and Vienna Airport ending the week on a high, rising 4.4% and 4.1%, respectively, while competitor, Zurich Airport, eased at 0.2% on Friday (18-Sep-2009).

In the Asia Pacific region, Auckland Airport led the gains, closing up 2.8%. China’s airports were softer, with shares in Shenzhen, Shanghai, Xiamen and Guangzhou airports closing down 3.5%, 2.9%, 2.7% and 2.6%.

Meanwhile, Mexico’s airport operator, Grupo Aeroportuario del Centro Norte (OMA) fell 2.8%. It announced the second of its four divided payments for its 2008 results will be made on 15-Oct-2009. 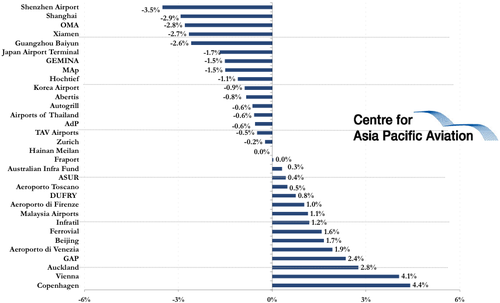