Vienna International Airport’s CEO, Julian Jäger, said recently that the airport does not anticipate double digit passenger traffic growth in 2020, after a 17% year-on-year increase to 32 million in 2019. He added that "slots in Vienna are becoming scarce", and the airport is anticipating 3% to 5% growth in 2020, and after 2020, "much flatter" growth still than in the past two years.

The airport has not only recovered from losing Air Berlin. Austrian Airlines has grown its connections, but low cost airlines are taking advantage of what appears to be a surprising pricing advantage over rivals that is offered by Vienna.

However, with an additional runway deferred the availability of slots is becoming a serious issue.

Apart from very ‘off-peak’ hours, slots are hard to get at Vienna Airport

One can see what Mr Jäger means by a slot problem in the chart below.

The chart is not of actual slots, but of seat capacity (arriving/departing) by the hour for Wednesday 12th February. 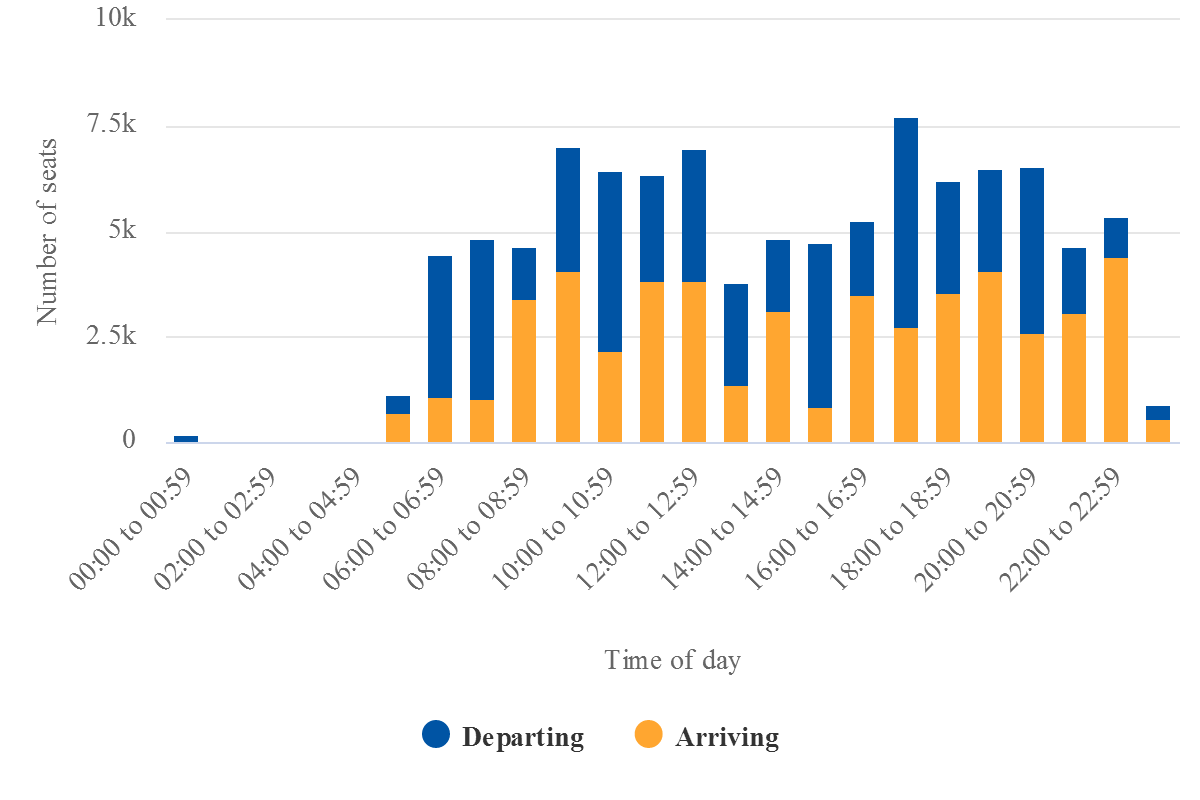 Other than at the extreme ends of the day and an hour in the middle, there is not much spare capacity around.

During the past decade the airport has reported passenger traffic growth in all but one year (2013, when it was -0.7%). 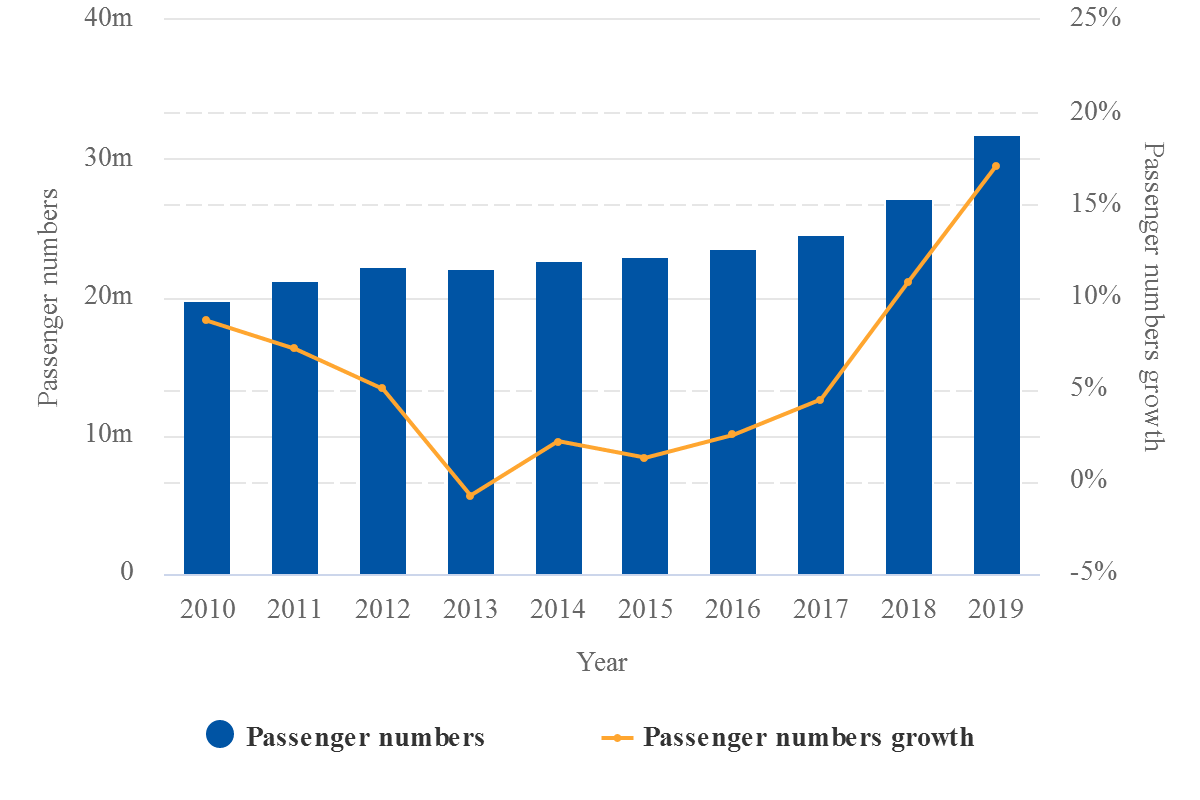 The fact that airlines have finally filled the gap left by the failure of Air Berlin – which was the second largest airline at Vienna after the national carrier – is part of the reason for the growth, but another important factor is the way that Austrian Airlines has re-established itself in its traditional role as an east-west facilitator via its Vienna hub.

Vienna Airport's claimed cost advantage over rivals is a considerable one

Mr Jäger added that the airport had increased routes to Asia by almost 14% in 2019 because it was able to attract new airlines. All three of those airports in Switzerland and Germany can be considered to be competitors to Vienna for east-west traffic flows – short, medium and long haul.

According to the CAPA/ATRS air charges comparison database for 2019, that claim is certainly true for small and medium size aircraft, with Vienna’s charges being less than half those of one of its competitors in one instance. 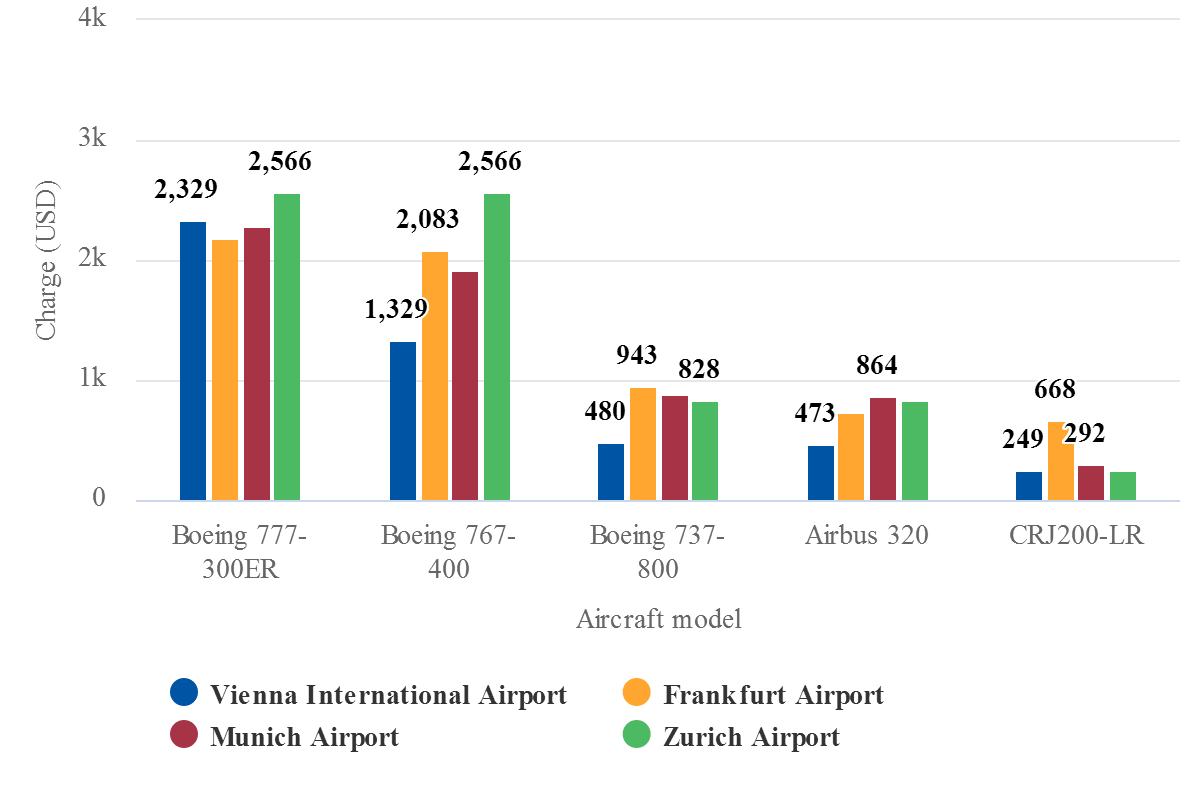 In fact, taking the argument a stage further, it is to be wondered why Ryanair, since it decided to focus on primary airports a few years ago, has continued to shun Vienna entirely in favour of Bratislava’s Ivanka Airport, approximately 80km (50 miles) away.

Bratislava’s standard landing charges for a Boeing 737-800 are almost two and half times those at Vienna (although that does not allow for any ‘marketing’ arrangement of course). And Ryanair might have been more prepared than most to operate in the few offpeak time zones at Vienna, where there are slots available.

Austrian tourism levels not running in parallel with passenger increases

Mr Jäger said recent passenger growth is "undoubtedly a positive development... especially for tourism in Vienna and throughout the east of Austria".

He continued, "The tourism industry is benefitting greatly from strong passenger growth. It remains to be seen whether these extreme growth rates will be sustainable".

That statement might be questionable. Tourism data for Austria in CAPA country profiles show that approximately 45% of foreign tourists arrive from Germany, and many of those will make the journey by motor vehicle.

As with passenger numbers, the rate of growth of tourist arrivals into Austria has been consistent since 2010 (including a small growth increase in 2013 in this case), but the growth rate has been in decline in every year since 2015, and in 2019 it fell to its lowest level since 2014. 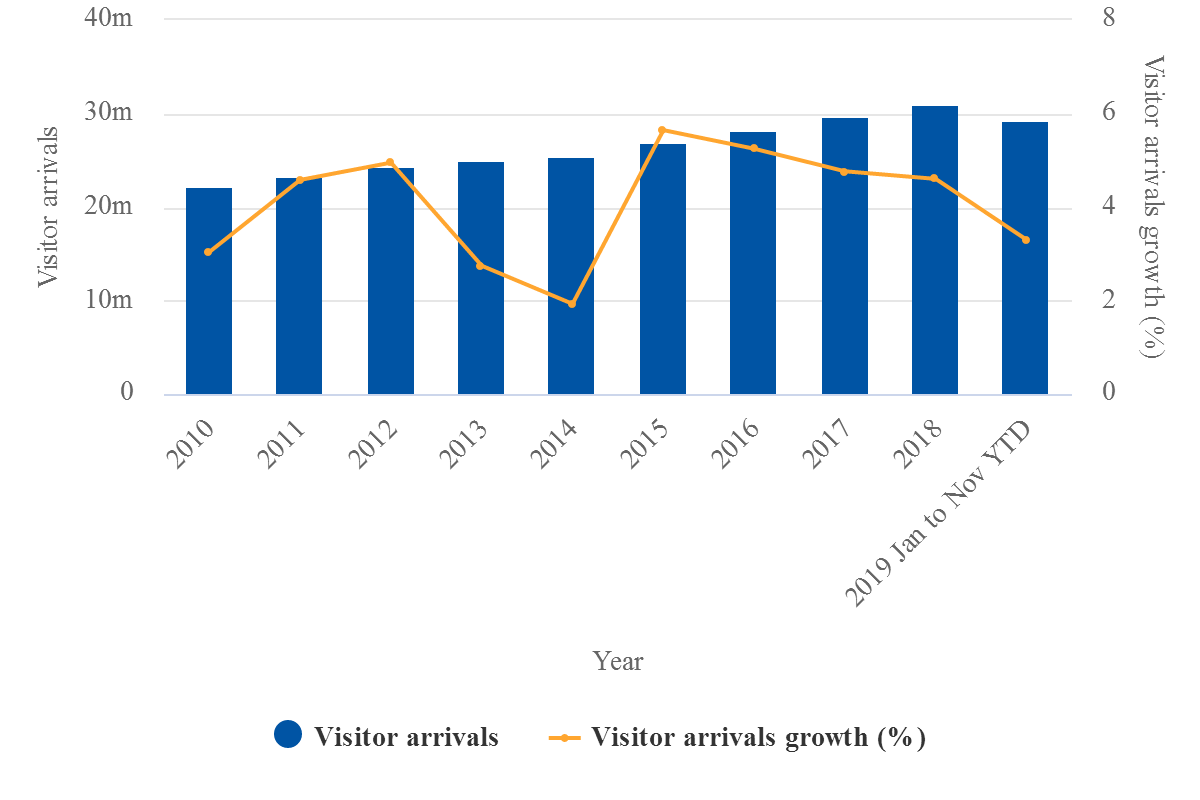 This anticipated decline in the passenger growth rate appears to be behind Mr Jäger’s statement that the airport will only build a third runway "if there is a demand for it and if it pays off".

That is a 'chicken and egg' statement. How can you know if it will “pay off” if you don’t build it?

Mr Jäger said that a new runway would be the most effective way of increasing slot capacity; however, it would only come online in 2030 at the earliest. He also said that efforts will be made to encourage airlines to select slots outside peak times, adding that these could be of interest to airlines not based in Vienna.

"In summer 2020 we are fully booked in the morning and in the evening... in between, there are still many free time slots that we want to fill", he said.

Again, taking into account the seat capacity chart above, which is similar on most days of the week – and at the time of writing it is only February – that might, again, appear to be a slightly surprising statement.

In the long haul arena, the airport is eyeing a new connection to São Paulo, enabling the first nonstop connection to South America, although it will "take some time now" due to the economic crisis in Brazil. The company sees potential for route development in Indonesia and secondary destinations in China outside Beijing and Shanghai. (Again – presumably not right now).

Mr Jäger also called for an obligatory synthetic fuel usage system, which could be financed from Austrian air passenger duties. Interestingly, that argument was offered not from an environmental perspective but from a business one…"it could stimulate demand", he said.

Breaking: Jan-2020 traffic figures suggest that the vanishing slot effect has not adversely affected traffic yet

Jan-2020 passenger traffic results for the Flughafen Wien Group (Vienna Airport, Malta Airport and Košice Airport) show a 14.0% rise in passenger volume and a 14.4% increase at Vienna Airport, to 2.5 million and 2.1 million respectively.

At Vienna, the number of local passengers handled increased by 14.9% and transfer passenger volume rose by 13.3%. The number of flight movements climbed by 7.4% year-on-year. However, cargo volume at Vienna Airport fell by 4.1%, compared to the level of Jan-2019.

The number of passengers travelling to destinations in North America and Africa also developed positively, rising by 26.7% and 23.6% respectively.