Since the Value Alliance was announced in May-2016 as the second low cost airline alliance there has been industry interest about how and where the alliance can deliver synergies. The Value Alliance was a popular discussion item at CAPA's recent LCCs in North Asia Summit (7/8-Jun-2016) in Narita. Tokyo Narita is the alliance hub with more service from Value members (five) than any other. But Asia's most popular airports for Value members are not where the alliance has a local member: Taipei and Hong Kong.

In terms of frequency, Manila and Bangkok Don Mueang have the most Value flights, reflecting their local membership there. The local Value member based at an airport typically dominates the hub, accounting for over 90% of Value flights. That creates a strong feed network for other members but also – potentially – competition that may be too strong. Members overlap on only six routes so far and their combined frequency gives them a scale advantage against non-Value LCCs. Although it is premature to evaluate the effectiveness of the alliance – new members will join and existing members will grow – this analysis looks at where there are network opportunities for cooperation.

Airports most frequented by Value Alliance are not member hubs

There are services from three or more members of the Value Alliance at 15 airports in Asia. This includes Tigerair and Scoot, which have the same ownership, but excludes Cebu and Cebgo since Cebu owns Cebgo. Tigerair and Scoot are expected to merge, with only one brand surviving.

Five airports have services from four or more alliance members. The two most popular airports – Taipei Taoyuan (6) and Hong Kong (5) – are not local hubs for the Value Alliance. Three airports have services from four Value members: Hanoi, Osaka Kansai and Tokyo Narita. Only Tokyo Narita is a Value hub (served by Vanilla Air), although Osaka Kansai is a growing focal point for Vanilla Air and in time will likely become a hub. 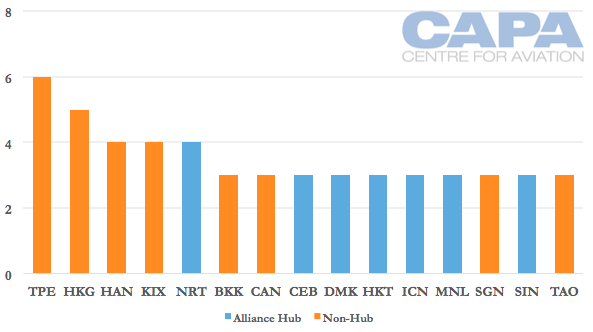 Taipei is home to two LCCs – Tigerair Taiwan and V Air – but neither is a member of Value (or of U-FLY). Tigerair Taiwan is 10% owned by the Tigerair Holdings but is not a member, and is expected to be wholly under control of the China Airlines Group once the expected Tigerair/Scoot merger occurs. V Air is owned by TransAsia and has no partnership affiliations. TransAsia, a full service regional airline, is not a member of a global alliance.

In contrast, Southeast Asia has three widebody LCC operators that are belong to an alliance: Scoot, NokScoot and Cebu. Cebu can access Northeast Asia with narrowbody aircraft, although it sometimes uses widebody aircraft on trunk/congested routes. There are services from three Value members at 10 airports, and all but three are Value member hubs.

Measured by frequency, most services are at Value alliance member hubs

The four largest – Manila, Bangkok DMK, Singapore and Cebu – are significantly larger than the rest. Of the 10 largest airports based on member frequency, only two – Hong Kong and Taipei Taoyuan – are not member hubs. 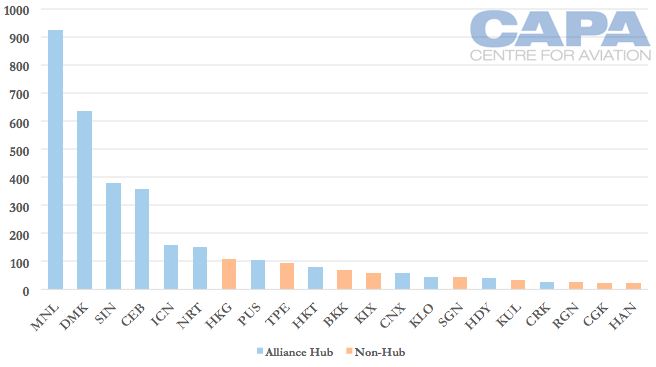 Largest Value Alliance airports are dominated by their members

13 of the region's largest airports have more than seven daily flights from alliance members. Each is dominated by its local alliance member. At the two largest – Manila and Bangkok DMK – the local alliance hub member operates 98% and 94% of all flights by the alliance. In other words, of all Value flights at Manila, Cebu operates 98% at Manila while NokScoot and Nok operate 94% of all Value flights at Bangkok DMK.

A Value Alliance Member typically accounts for over 90% of alliance flights at its home. Four airports are around the 80% mark while there is no Value Alliance member operating flights at Bangkok BKK (they instead operate out of Bangkok DMK). 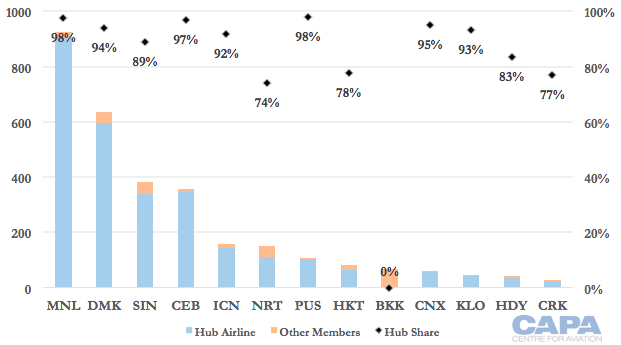 The large presence of the local Value member could mean a non-local Value member could access a wide network of the local hub member. Alternatively, the high concentration could make it difficult for a non-local member to enter the hub and break the local airline’s dominance. Unlike the situation with full service alliances, there are no joint ventures or codeshare agreements that incentivise alliance members to cross-sell and help each other’s entry into their local hub.

Perhaps evidence of this is the earlier graph showing that of the five largest airports based on number of alliance members present, only one is not an alliance hub.

There is a possibility that Value Alliance could help LCCs gain scale on routes, especially where due to infrastructure constraints – slots, air traffic, bilaterals – organic growth may not be an option.

In the week commencing 12-Jun-2016 the Value Alliance members overlap on only six routes. This excludes overlap only between Scoot/Tigerair (owned by the same company and expected to be merged) and Cebu/Cebgo (Cebu owns Cebgo). Cebu has the most overlap (four routes) followed by Jeju (three), Tigerair and Scoot (two) and then Vanilla Air (one).

No route has more than two operators. The frequency split varies between relatively even and lopsided. As this analysis is focused on the opportunity to offer more flights, frequency – not seats – is considered. The use of widebodies at Scoot, and sometimes Cebu, would alter a capacity share analysis. 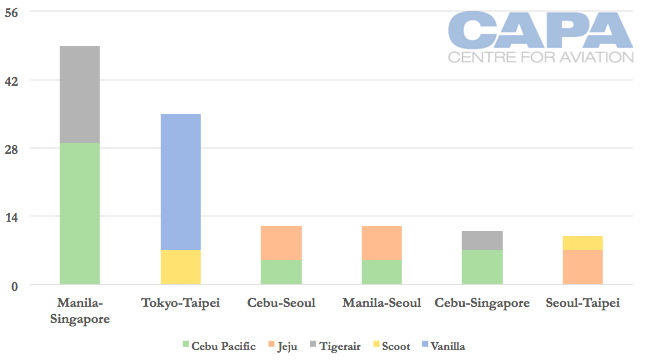 The alliance is seemingly effective at offering greater frequencies. The following graph shows the two Value Alliance members (the two shades of blue) and then all frequencies from competing LCCs.

When combined, the two Value members account for half of the available LCC frequencies – a strong proposition, although this does not consider effectiveness (such as whether timings were spread out during the day; additional frequencies at peak periods, etc.). In the Cebu-Singapore market there are no competing LCC services, giving Value an LCC monopoly.

Although the LCCs will not have joint ventures or codeshares – which would incentivise them to sell another airline – competition regulators may be interested to watch if alliance members increase fares where they gain a frequency advantage by making another LCC's flights available for sale. 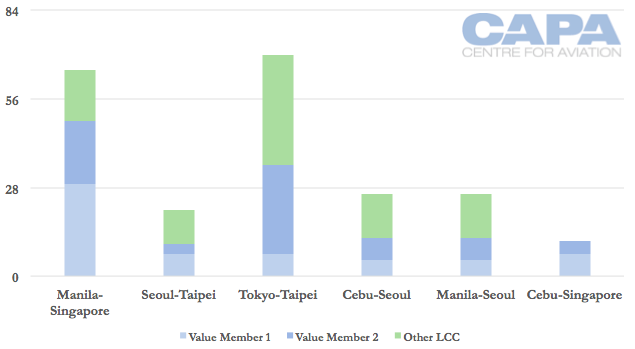 When frequencies from full service airlines (yellow on the graph below) are added in, the Value LCCs are still relative minnows, although stronger than they were before. 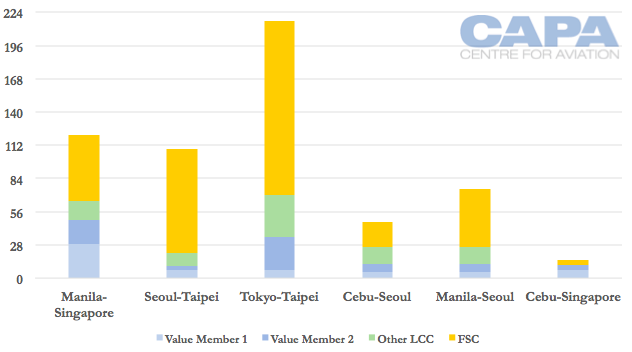 The geography of east Asia means that LCCs cannot serve the entire region with existing narrowbody technology, although LCCs in some markets can come close. The final analysis in this report considers the ability of the Value Alliance to link Northeast Asia with Southeast Asia, and vice versa.

Evaluating the opportunity is complex: routes are often to points where there is no service from another Value member, or there is limited frequency and it may not enable a same-day connection, or a connection within reason. Some connections would be circuitous. But as noted earlier, it is too soon to evaluate the opportunity for the alliance. 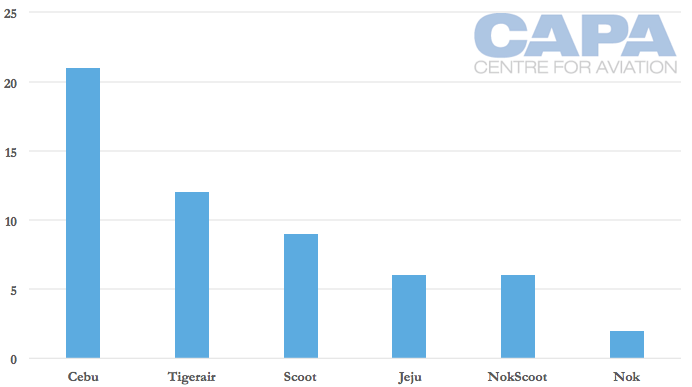 The Value Alliance faces the same conundrum as full service alliances: adding members brings opportunities but also competition. A member that is more central between the regions – such as in Hong Kong or Taiwan – could enable more links and connection opportunities.

Alternatively, that member may prefer to serve points on its own. (As CAPA has previously recorded, some Value members are expected to work with HK Express outside the LCC alliance organisations.) More long haul operations could mean that an airline gains access to the strong regional hub of a partner in a different part of Asia. Alternatively, this could preclude cooperation between other members.

The opportunities for the Value members today are varied, but they do exist. With time, the synergies within the alliance should become greater. Most critically, this is all being developed with minimal cost, unlike the high joining and membership fees of full service alliances. While the gains may not seem as significant, neither are the costs.

As CAPA has previously concluded of the alliance:

Joining Value Alliance should be an appealing option for Asia’s independent LCCs since the cost and risk of membership are small. At the 16-May-2016 launch event executives representing the founding members stressed that the concept is to add incremental passengers without incurring additional cost or adding any complexities. The members said that they would not have joined if they had not been able to retain their business models.

The members expect that the alliance will only generate a small increase in their interline traffic volumes – at least in the initial phase.

The Value Alliance essentially offers its members a nothing-to-lose alternative for attempting to increase transit traffic and attract passengers in new markets who are now flying with other airlines. Even if the alliance only brings each member a 1% incremental gain in passenger traffic it can be deemed a success, given the limited cost and the simplicity of the new offering.

Asia’s independent LCCs need to evolve and embrace new alternatives if they are to maintain their growth trajectory and succeed in an increasingly competitive marketplace.