On occasion, discussion in the US market place turns to consolidation, and whether there are any remaining potential combinations left in the country’s mature aviation space. After a CEO change at Spirit two years ago, speculation mounted that the stage was being set for a tie-up between it and the fellow ULCC Frontier.

Spirit Airlines and Frontier Airlines have both evolved during the past couple of years. Each airline has worked to improve its operational performance and customer sentiment to varying degrees. Combined, those airlines could arguably reach a certain level of scale more quickly, but for now, it appears that each company is planning to chart its own course in the US market.

The situation that prevailed for Spirit and Frontier a couple of years ago remains in place – each company is at varying stages of its ULCC journey, and is approaching the US marketplace with a slightly different strategy.

Spirit and Frontier have the commonality that the ULCC specialist Indigo Partners has been involved with both airlines. Indigo sold its stake in Spirit in 2013 and purchased Frontier later that same year to create a second fully fledged ULCC in the US market. There have been off and on plans for Frontier to undertake an IPO, but the airline remains fully controlled by Indigo.

When former AirTran CEO Robert Fornaro was named in that same capacity at Spirit in early 2016, speculation hit a fever pitch that a merger with Frontier was imminent, largely driven by their fleet commonality, which remains intact.

However, since that time, Spirit has moved to purchase some Airbus A319s directly off-lease after slightly altering its network mix with the addition of smaller markets. Spirit has 31 A319s in service.

Frontier, meanwhile, has five A319s in storage and 12 in its operating fleet.

In late 2017, Indigo placed a massive 430-aircraft order with Airbus, spread across airlines it owns or has stakes in – Frontier, JetSMART, Volaris and Wizz Air. Frontier’s share of the order was 100 A320neos and 34 A321neos.

Spirit and Frontier make strides in improving their operations

Back in 2016, CAPA concluded that a merger in the short term between Frontier and Spirit made little sense. Spirit was focused on shoring up its operational performance and improving its customer perception, whereas Frontier was just nearing the completion of its transition to the ULCC model, with a focus on getting its unit costs to the USD6 cent or below mark.

See related report: Spirit and Frontier: A merger in the short to medium term makes little sense, despite suggestions

Both Spirit and Frontier have improved their on-time metrics. Data from OAG show Spirit’s on-time performance improved from 73.92% in 2016 to 76.97% in 2017 – more than a three percentage point improvement.

DoT data show Spirit’s on-time record for the 12M ending Mar-2018 was 78.9%. During 2016, Spirit stated that its goal was to post a consistent on-time performance figure in the mid-70s.

OAG has calculated that Frontier’s on-time performance increased by 3% year-on-year in 2017, and DoT’s calculations show an on-time record of 78% for the 12M ending Mar-2018.

Spirit and Frontier take slightly different approaches to their networks

During the past couple of years Spirit has worked to diversify its network through the addition of smaller markets, including Akron, Ohio and Richmond, Virginia. More recently, Spirit has resumed some international growth, to Guayaquil, Ecuador and St Croix.

Spirit also has a higher level of frequency to a majority of its destinations compared with Frontier, which serves more destinations than Spirit, but with fewer frequencies. 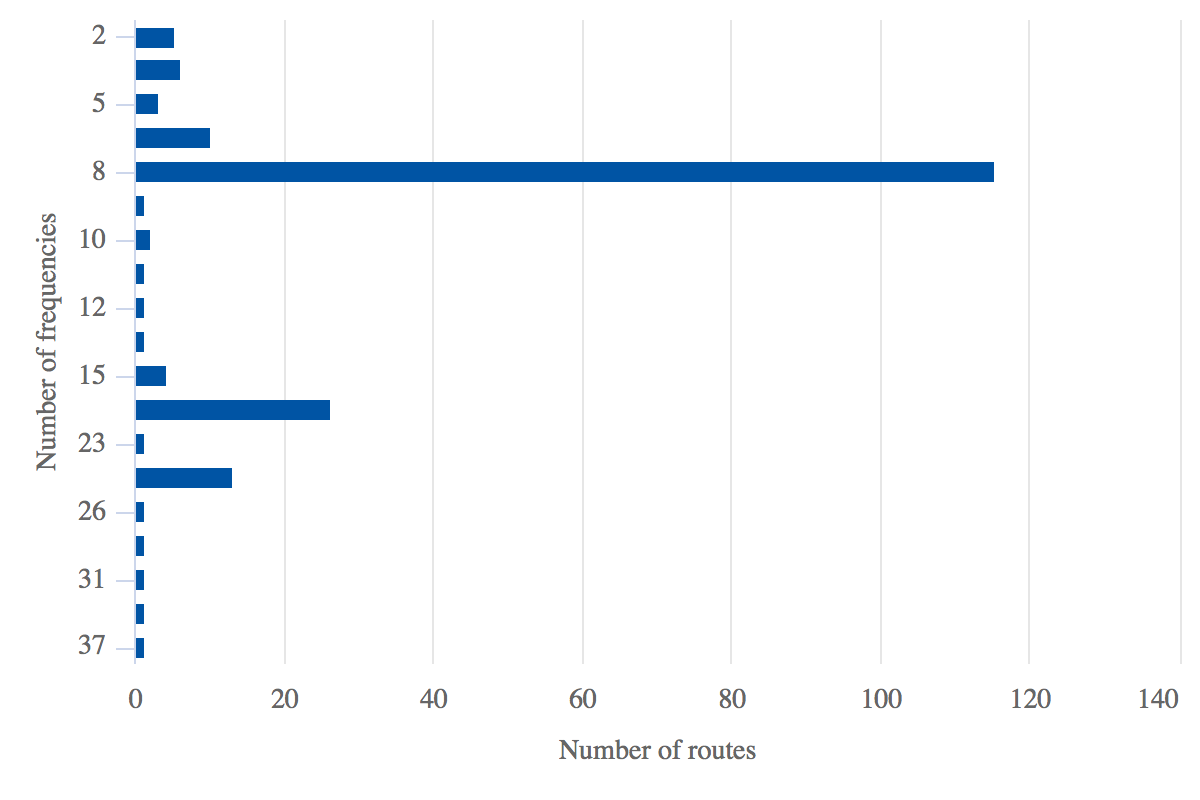 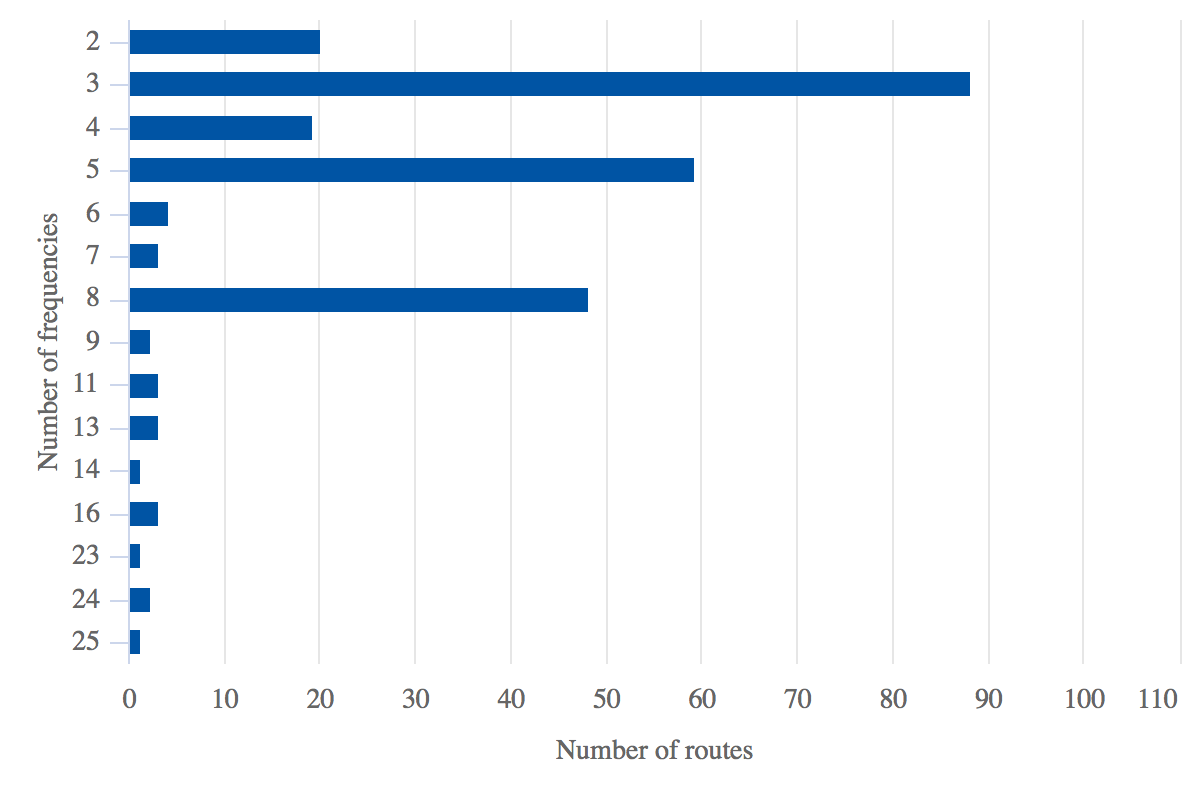 Frontier also tends to have more fluidity in its network, cancelling and launching routes with more regularity than Spirit, but each airline serves a mix of small and large markets. Based on data from the DoT from for the 11M ending Feb-2018, Spirit and Frontier would have a combined US domestic market share of approximately 6%. 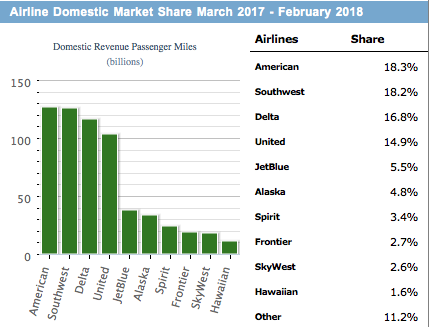 A Frontier-Spirit combination would elevate their market share based on current conditions in the US marketplace, but each airline remains at different stages in its ULCC evolution.

In some respects, Spirit is obviously more evolved, and has recently worked to garner more passenger favour through customer service training for its front-line employees, and its decision to equip its fleet with Wi-Fi capability (which makes the airline the first US ULCC to offer inflight connectivity).

Spirit has also reached a five-year deal with its pilots (in early 2018) that entails a 43% pay raise, according to USA Today; the airline has concluded that it gains improvements in efficiency and reliability through the new agreement.

Frontier’s pilots have been in negotiations for close to two years and pilots have asked to be released to further talks, which could eventually lead to a strike if the Trump Administration does not intervene. The airline is also in negotiations with its flight attendants.

Now that Spirit has certainty of its pilot costs for the time being, the expectation is that the airline should place an aircraft order in the not too distant future.

Spirit and Frontier pursue their own paths, for now

At some point, it might make sense for Spirit and Frontier to consider a merger to become a more formidable force in the US marketplace.

But for now, it seems each airline is pursuing its own path for growth, believing that the US can support more than one large ultra low cost airline.