In Hollywood, when a patient is hooked up to a life support machine, the first sign of recovery is a dramatic upwards tick on the monitor. While the US airline industry is not terminal, it is certainly unwell. The latest traffic results for April from the US Air Transport Association (ATA) certainly represent the sharpest resurrection in the vital signs of the US market seen this year, and an early indication that the patient may one day leave the emergency room. But, by contrast, yield data for April would however suggest surgery is still required.

Traffic on US airlines across all international regions in Apr-2009 improved dramatically over the results of Mar-2009, according to the ATA, although it is important to note that the April results partially reflect the shift in the Easter holiday from March last year to April this year. Overall system demand improved from the 11.1% fall seen in March to a 6.3% decline in April. Most regions still reported overall falls in RPMs and passenger numbers. 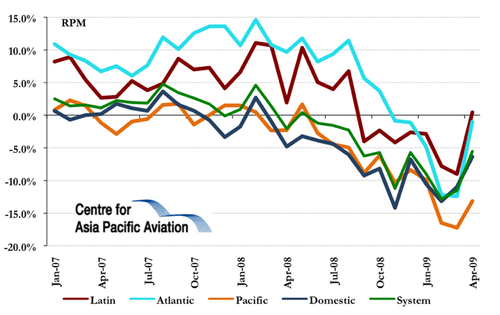 Internationally, Asia Pacific remains the weakest region, with traffic (RPMs) falling 10.9% in April (vs a 15.1% fall in March). Atlantic traffic went from a 13.8% fall in March to a 1.4% decline in April. Latin American RPMs were positive, up 2.4% - the first region to show positive growth since late 2008. This will be short-lived however. The impact of swine flu could be particularly severe on traffic volumes to Latin America in May-2009 and Jun-2009. 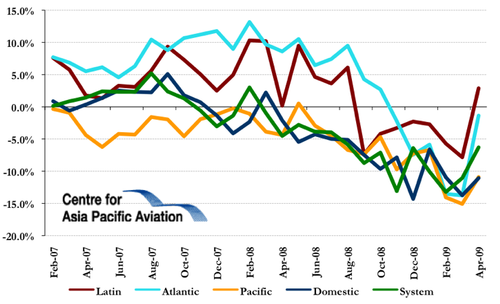 The result was that overall system passenger numbers were down 6.3% in April. This is still a 4.8% improvement over the March figures, and the second consecutive month that there has been a relative improvement.

Capacity cuts still coming, but at a slowing rate

While demand is up, at least in April, US carriers have continued to display commendable restraint on the capacity front. Total system capacity (ASMs) for ATA carriers was down 7.2% year-on-year, a full percentage point ahead of the drop in demand (RPMs). 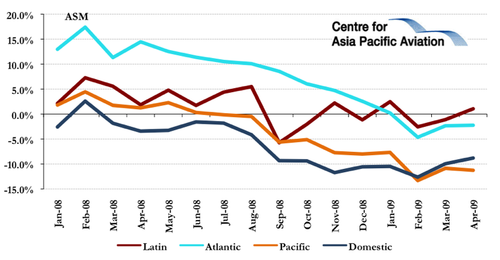 However, ATA carriers, which represent more than 90% of total US capacity, have slowed their rates of capacity cuts over the past few months, in all markets.

The traffic recovery - if that is what it is - has however come at a cost. The easing in the rate of traffic decline has not gone hand in hand with any return in yield strength. US carriers are still facing considerable pricing weakness, particularly on the Atlantic, where yields declined by a scary 21.9%, compared to the 1.4% drop in passenger numbers. 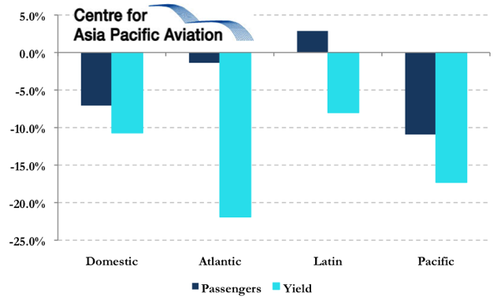 The yield fall off is partly explained by the dramatic drops in premium traffic levels and also by the continued shift in the composition of traffic, with more passengers ("suits") opting for Economy travel over premium seats. The other part of the explanation is the drop in international premium fare levels, which IATA reports declined by 25-40% worldwide during the first few months of the year, outstripping the fall in volume.

The April traffic figures may represent the return of a faint pulse for US traffic. The reported signs of rising consumer confidence - if they are indeed real - should start to show up soon in monthly airline traffic reports. The May-2009 data, clear of inconsistencies due to annual Easter differences, will offer a key indication. But May, like each of the months in 2009 will itself have some distortions - the latest being the swine flu, H1N1, outbreak. Because of that, even the May traffic figures are likely to be somewhat depressed, meaning an undistorted picture will not emerge until June (if however, they are less negative, that will be a reinforcing recovery sign).

Opinion remains divided over whether we have indeed seen a bottoming of the market. The stock markets - and oil investors - are betting the bottom has been reached. But reality suggests that the latest airline industry data is far from conclusive.

And, while a pick-up in airline traffic - and perhaps yields - may indicate a warming of the wider economy, there is little comfort to be had for the airline industry itself. With the mere hint of some green shoots, oil prices have now doubled against their price just three months ago. A near-equilibrium had been reached in recent months, as low fuel costs helped offset slow demand. It seems that temporary equilibrium has now been disturbed.

So, even if the traffic outlook is improving, a combination of still depressed yields and higher fuel prices promises to guarantee a difficult chase for profitability this year.